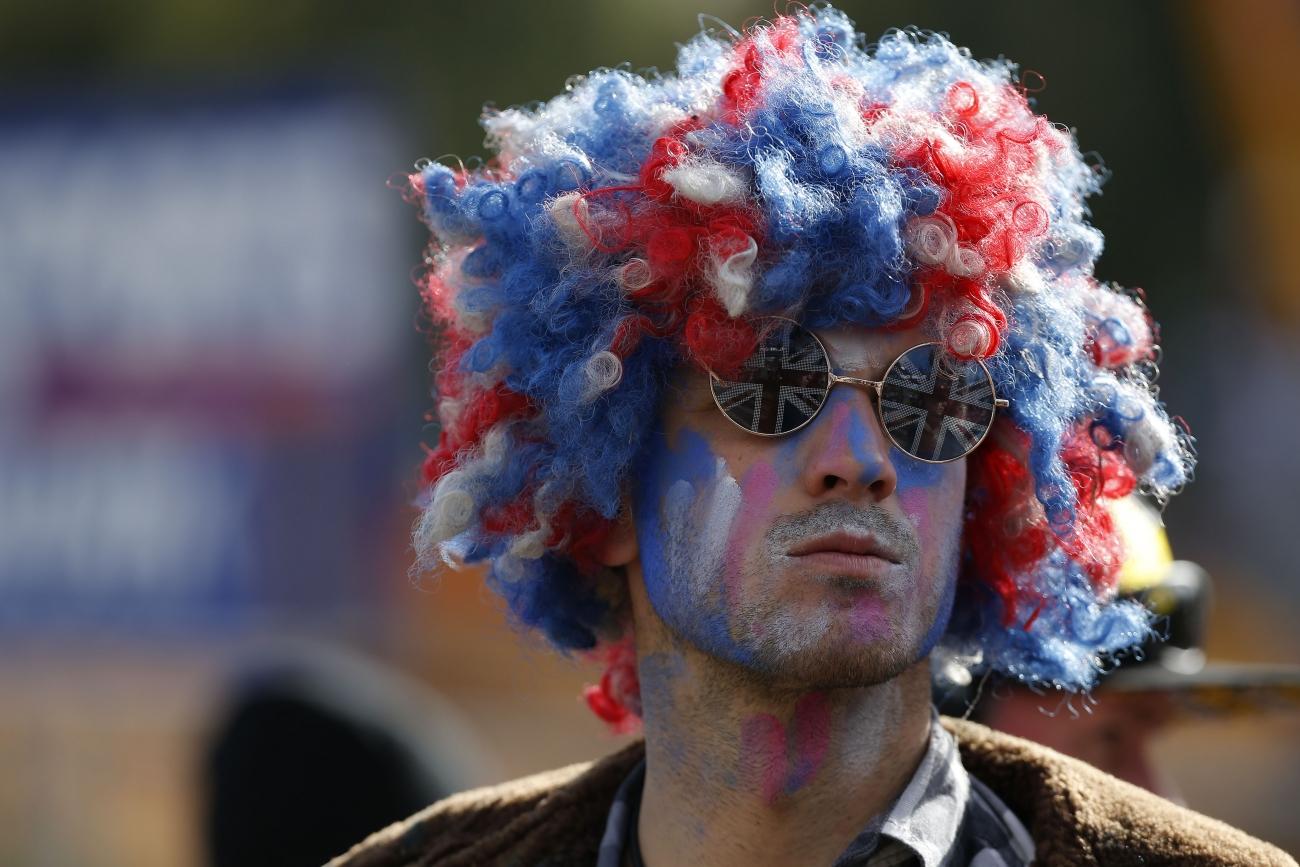 On the eve of this year’s Motocross of Nations, we received a hand-typed letter, via telegraph, somehow, from perhaps the world’s oldest motocross fan, Lord Alfred Weigandt. A distant relative of our own Jason Weigandt, Lord Alfred is an old Brit who is not afraid to tell it just like he thinks it is. (Here’s a link to last year’s piece.)

Enjoy this letter for what it’s worth, but be sure not to take anything from his Lordship too seriously—he’s the Monty Python of motocross.

Oh, ‘ello! Lord Alfred Weigandt here ready to celebrate this weekend. I’ve got some confetti ready to mix with the final shovel load, which will be placed atop the last steel/iron/titanium/carbon nail driven into the proverbial coffin of America’s motocross dominance. This is the year that will go down in history, twenty aught fifteen, when America lost wars on all fronts—oh, so glorious it has been!

American stadium-cross fans like to chat about their precious triple jumps, eh? Well, consider this triple: First, Ryan Villopoto moves to Europe only to get spanked so hard in the GPs that he literally cracks his tailbone! Oh, if only there were an easy way to type out the fact that I am laughing out loud….

Ah, so the Americans failed at bringing the war to us, and then we brought it to them at the U.S. Grand Prix, where Romain “Wasn’t Built in a Day” Febvre promptly crushed, demoralized, and dominated so thusly that I didn’t even see the likes of Ryan Dungey in the race. I’ve been told before that Mr. Dungey isn’t flashy on the bike, but seriously, it was like he was invisible out there. Oh, my God, I’m rolling on the floor laughing out loud! And hiding behind him were the likes of Justin Barcia and “World War” Trey Canard. I wasn’t surprised to not see those turncoats Christopher Pourcel, Kenneth Roczen, or Chadwick Reed there, since they’re drunk on stadium-cross, and they’ve all been drummed out of Europe before—two times in Monsieur Pourcel’s case.

Luckily, the Hell Glenen track (and with those temperatures, the name certainly fits) was devoid of the typical Yank stadium-cross jumps. In fact, I’m sure the only real obstacle Mr. Febvre faced was the throng of supporters jumping him at the Los Angeles airport, as he’s now an international sensation, and probably has Hollywood types offering up commercial deals and potential acting roles. Hey, he’s proven he can be a leading man, eh! Luckily, he’s a true sportsman and will put the endorsements aside, for this weekend he and his French friends have work to do, and that will be the most glorious motion picture of all: winning the Trophy of Nations and completing the anti-American three-peat of twenty aught fifteen!

(Now, a word to the French, who are far from my finest friends, but are certainly part of the Allied forces for the weekend. In the past you’ve had your chances to derail the Yanks on home turf, but the failure to do so resulted in rescinding the “des” in the original name of this event. I’m willing to make reparations and concede the “of” in Trophy of Nations if you come through against the Americans—and remember, we Brits concede nothing. Just think about Roggenburg in 1994!)

Revenge is a dish best served cold, like escargot, and one Marvin Musquin is hungry. The Marv Attack had Jeremy-Alex Martin against the ropes, boxed into a corner, and even between a rock and a hard place. Jeremy’s teammate used team tactics to help, but it wasn’t enough. So someone at AMA tech inspection obviously snipped a wire on Marvin’s Austrian-built machine to sabotage Marvin’s crowning achievement of winning America’s 250 domestique championship. I’d expect nothing less from that worthless bunch of doctors known as the AMA, seeing as they did the same to Christopher Pourcel in the past. It is unfortunate that luck is rarely on the side of the French, but it’s been said that you make your own luck, and let me just say that the French do not make things with the precision of us Brits, now do they? Does anyone else have a collection of rusty British Leylands, Rovers, MGs, and Triumphs in their yard like I do?

Anyway, back in 2011 the French team had Team USA beaten on home soil. Yes, Ryan Villopoto and Ryan Dungey jumped out to a 1-2 start in the final moto, but Pourcel was coming for them, and he ripped past Dungey while yelling something about 2009. And then? The mousse tube came out of Christopher’s rear tire, and his race was run. The Americans won by sheer dumb luck, emphasis, I’m sure, on the dumb—they were going so slow at the end it was like a tie for last.

Now, do you know who invented said mousse tube? Well, it’s officially called a Michelin Bib Mousse, and it’s a French piece. Yes, undone by their own doings! So sad for the French, but I believe in fair trade, so I have a proposal: If they get the crown this time, we can rename the event Trophy des Nations and we can rename the Bib Mousse the Bib Musquin, kind of like the time they renamed our Scrambles. Yes, from now on let’s call them Musquin tubes. That’s how revolutionary and important this weekend can be, let us be reminded each time we bang our knuckles trying to fit a foam tube into a tire.

Americans need all the reminding they can get. Only a few are smart enough to have figured out that the dark ages of motocross—1981 through 1993, and 2005 through 2011—have waned. One rider who had already figured it out is Ellis Tomac. Ellis had a cheat sheet via his battles with Roczen, who has haunted him around the world, first crossing the Atlantic to take Eli’s 250 stadium-cross title a few years back, and then welcoming him to Teutschenthal, Germany, at the 2013 ‘Nations. I believe Mr. Tomac remembers that race as a flight of fancy!

This year Ellis began to go quite quick on his 450 (I like to call it “Thorpe speed”). Then he got to the Lakewood race, which is world famous for hosting the ‘Nations in 2010. That was all the reminding that Mr. Tomac needed, for he realized a date with destiny was coming for this year’s ‘Nations, and that date was not the type you’d bring home to see Mum. Plus, the date would be ugly! Poor Ellis, realizing he’d have to face Febvre, Paulin, and Musquin—the Mount Rushmore of France—on their home pitch, probably felt like he wanted to crawl into a hole. And, you know that’s exactly what he did!

By then, Mr. Dungey had already made up his mind, the last three years having taught him valuable lessons. Villopoto had already begged for mercy (Merci beaucoup, Ryan). So now come the other Americans. Justin Barcia, well, he might have accepted the team invite each time it was given; however, we can never forget his 2012 ride where he was literally on the fence! (And if not for Chuck Sun, he might still be there….)

Jeremy-Alex Martin is back, but the American team is so desperate for a third rider that they’ve brought back Guy “Airtime” Cooper as the third rider! I know Cooper has a small-bore championship, but now he’ll have to race a man’s bike. Oh, don’t worry—I saw the video of Cooper jumping the huge stadium-cross jump at the Indiana race a few weeks ago (this was before I was reduced to tears over Marvin’s plight). Sorry, this is not the Vet des Nations. Mr. Cooper is in big trouble!

Where was I going with all of this…? Oh yes, revenge. Well, I’ve been informed that both Martin and Cooper (sounds like a law firm; I suggest the Yanks get one because there will be pain and suffering this weekend, and you know how they like to sue) ride for the Yamahalube/Sun Racing Yamaha team. You know who once rode for said squad? A young Paulin Gautier. The man had the stadium-cross skills that reminded of a young David Valuminum, but the Americans wanted to sabotage his success, too, and he was sent home without being given enough of a chance. Do you not realize sabotage is a French word, just like sarcasm? Do not play their game! Paulin would wait until the first time the Sun Racing Yamaha team participated in the event, last year, and unleashed fury, dominating last year’s Trophy des Nations and leading the French to victory. Sun Racing? More like Sunset! This year? Expect no mercy, Merci.

If the French favorites don’t come through in the Romain Empire, might I suggest the Brits as likely heroes? I’ve said before, and I’ve said again: What a sight it would be for Dean Wilson to don only his kilt on the podium whilst the fans looked up at him to see what a real man is made of. It’s so unfortunate that this event will take place on hard-pack, for if Simpson and Anstie were let loose on a sand track, we could just go take my neighbor Pete Chamberlain’s vase home right now. However, this is a motivated group. First, Anstie was once given a shot in American stadium-cross, and do you know what team that was for? OF COURSE! Sun Racing Yamaha! It’s unfortunate that the foreign relations department of Sun Racing Yamaha did not flourish under its team owner, President Bobby Reagan. Is that team afraid of foreign riders? Well, I can mend fences with some advice for you, President Reagan: tear down that wall!

But alas, for the Brits, no day at Weston beach this weekend. If they’d just move this thing to Normandy, the Brits would triumph in France just like they did so many years ago. But we all know times change and you can’t live in the past—unlike D-Day, this one is going to turn out badly for the Americans. To the idea of American victory, I say twenty aught fifteen has sent a message, and it reads: bon voyage!

Thank you. Please tip your Butler Brothers, and tell Roger I said hello.

Yours in Scrambling,
Lord Alfred