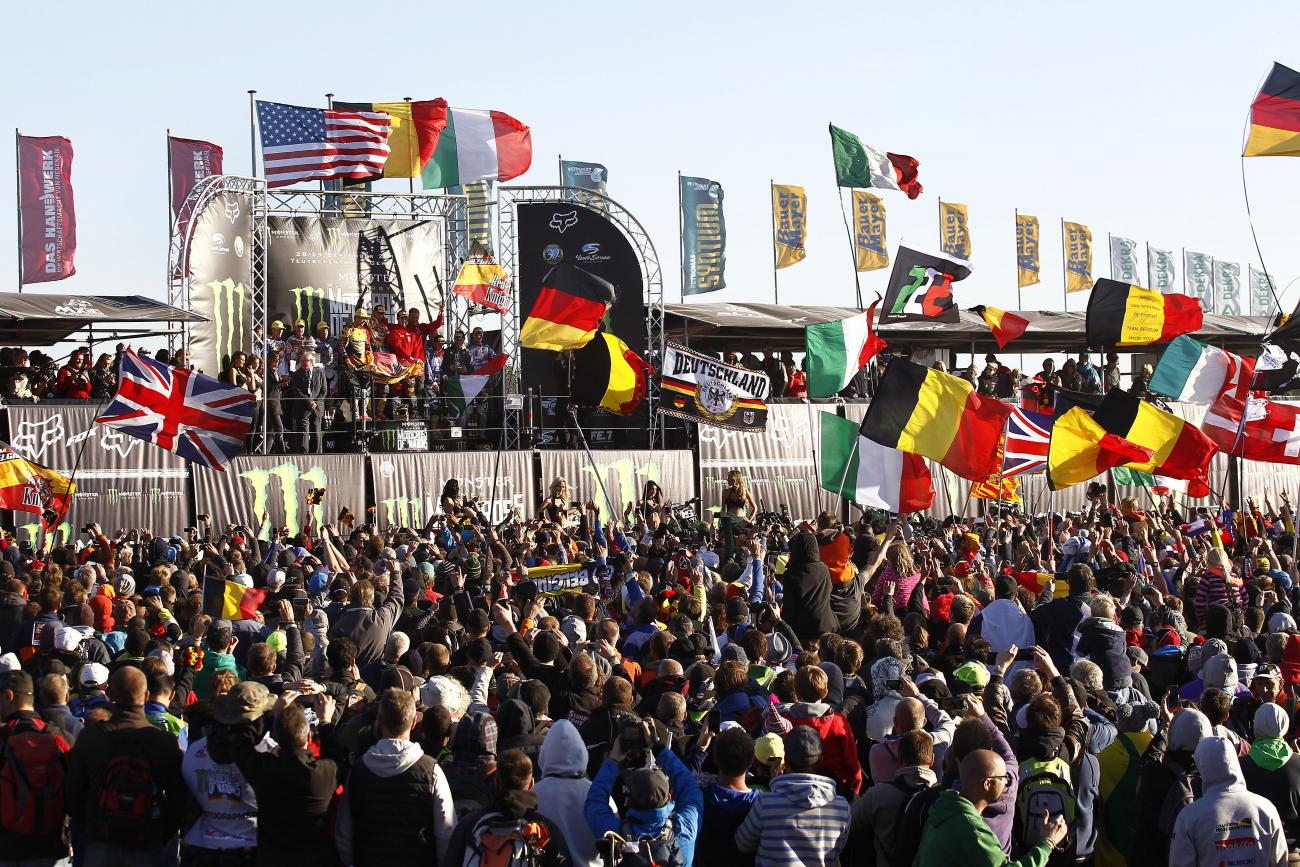 Every once in awhile, Jason Weigandt's uncle Lord Alfred mails us a letter from his castle deep in the English countryside. He's very narrowminded and believes mightily in his countrymen--so he really likes to turn up the prose when Motocross of Nations time comes. This is his latest work. Take it seriously at your own peril.

Oh, ‘ello! Lord Alfred Weigandt here, resplendent of mood and desire, for this weekend comes the biggest, most celebrated, most brilliant day of all: THE DAY THE YANKS GET SPANKED!

Fittingly, this year’s Trophy des Nations marks the twenty-year anniversary of the miracle at Roggenburg, that great Great Brit triumph over the Americans that ended that nasty thirteen-year Team USA win streak, of which is generally referred to as the Dark Ages, or even the Scarlet White and Blue Fever. On that day, the glorious trio of King Kurt Nicoll, Rob “The Fish” Herring, and Mailer won it straight up for the Union Jack, jack! Positively awe-inspiring stuff, to the point where I was inspired to hop the fence of King Kurt’s castle and streak nude through his courtyard, wearing nothing but a bowler hat. Of course, I can’t totally be sure that really was King Kurt’s castle, or if he even lived in a castle at all, but I improved my odds by streaking through as many castles and courtyards as possible. I could tell by the reaction that all of England were excited for that race win as they screamed and cheered my every move, to the point of throwing things at me as if I were on parade! Then came sirens and lights and bobbies, bloody brilliant footy-hooligan stuff. Oh, but that was twenty years ago. If only I could have my 60-year-old body back again.

On the good side, I may be more feeble but I am also older and wiser than ever. My experience tells me that all is lining up for another glorious run at the Chamberlain Trophy and a return to its rightful home. Peter Chamberlain was an Englishman after all. First we know the weaknesses of the Yanks. Martin Jeremy is new to the world stage and will be unfamiliar racing on a track his parents do not own. “Oh, so you had some sort of backyard playground as a lad?” This is not a playground, Marty, and it’s certainly not one of those backyard stadiumcross tracks like you probably rode. (Who lives next to the Metrodome anyway?) This is real motocross and I seriously doubt Martin Jeremy grew up with real motocross obstacles—like uphills and downhills and sand whoops—right outside his door. Go ahead, jump your triples, mate, if you can find them!

Ryan Dungey attempted to “Euro-ize” himself by going KTM and feeding from the hand of Roger DeCoster, but we know how crafty “The Man” can be—he did grow up next to France, you know. Roger might have vacillated between yellow, red, and then yellow teams during his career but while he ran from brand to brand his yellow-red-and-black colours never ran. Belgium, mate! Then Roger went orange and convinced Ryan to follow. Is it any wonder why Ryan’s KTM looked out of sorts the last two years? No way Roger will give him the good stuff and aid in the cause of beating his Belgian brothers. Did you see how perfectly The Man’s plan worked last year? The Red Knights win with an assist from The Orange Man!

The other American is Ellis Tomac whom I’ve heard is actually professional mountain bike racer. I recall Tomac’s name in the pedal ranks dating back into the 1980s, in fact. He must be nearly 50 years old. Good luck with that!

But age doesn’t always beget smarts (though it certainly does in my case, ahem). Last year Mr. Tomac tried one of those NikNak freestyle jumps during the race. Typical American, thinks he’s Travis Pastrami. It did not end well.

On the other end, Ryan Villopoto is only in his twenties, but he’s a certifiable genius. He’s once again bowed out of a beating on the world stage. Oh, a knee injury again Mr. Villopoto? Are you running so thin on excuses that you have to keep trotting out the same ones each year? How many times I’ve smiled myself to sleep remembering the sight of him caught in a fence at Matterley Basin in 2006. Yes, European fences are heartier than yours. I doubt Mr. Villopoto ever even considers racing on European soil again.

With the Americans overmatched—Martin Jeremy not used to sandy, rough motocross tracks, Tomac searching for 10th gear, and Dungey searching for the “European” settings his bosses will not unlock, things are looking good for GB. Better yet, traditional European powers are struggling.

Take the Germans. Seriously take them, please. Ha! Ken Roczen has visa issues, to which I say, young man, did a few years in America make you that addicted to credit cards? Typical debtor American apparently now. The French have wisely avoided such fate by avoiding the Americanised French altogether, although we certainly can’t say that the French collectively aren’t in our debt now can we? On track they can collect results though. I believe Gautier Paulin as capable as any (he has a background in BMX but he then parked the bicycle for a dirt bike. Ellis Tomac should take lessons). Meanwhile, the French countryside has basically been birthing MX2 speedsters by the puppy litters, so they could pick from any number of capable hands. New MX2 World Champion Jordi Tixier will not be racing, which allows him to continue what must be the world’s longest victory party in twenty years (or until the one that starts on Sunday). Let me guess, much wine involved, mes amis? We know that Tixier won the title because the eighth Wonder of the World, Jeffrey Herlings, was injured and missed eleven from seventeen heats. My cup runneth over with love for Mr. Herlings, who sticks to the Grand Prix circuit instead of California Stadiumcross. I’m very sad to not see the lad in action this weekend and I might have to make a stop in his native Holland soon to cheer up. I know just the place.

I do respect the artistic and stylist talents of the French but I do not put much stock in their guile under the pressure of the Nations. One man who does scare me is the other World Champion, Super Tony Cairoli, who will likely vanquish everyone even though he lost a bet and has to ride a little 250 thumper. At least he won’t lead from the starts, just the finishes. The Italians are formidable and my respect for their rabid love of racing burns hot. However we know with the speed of an exotic Ferrari comes unreliability too, unlike my trusty MGs and Triumphs which go on forever. This is not a race won through great individual rides but rather team racing and that’s where my Brits will shine.

Other super teams? Australia still runs the Union Jack within their flag and is thus capable, and I find the incomparable Chad Reed beyond comparison. I like their chances with Matt Metcalfe and such as well. You know what we Brits set up Australia for when we settled it, right? Imagine if the Aussies stole the Chamberlain one year. It would be fitting if nothing else.

But not this year. The Brits have put together a coalition that goes beyond motocross, imploring the citizens to keep Scotland as part of the empire just to allow Dean Wilson to ride under our banner. Such a brilliant long-term plan. First Dean sneaks into the North American scene, spying as a Canadian and pretending to be part of the friendly border with the U.S. He then switches alliances back to his native land—but having to ride an American-sourced bike he knows the chances of a sabotage are keen. So Dean and the Scots set up a fake “election” to show the chance of defection at the same time his bike is being built and packed and shipped. Fools! Did you really think a nation would ever willingly chose to leave the British empire? Now the bike has arrived, the election is over, and Dean was a just part of the plan. Brilliant.

I do enjoy Dean’s approach. He’s done his best work at a real job—motocross—not stadiumcross. His stature reminds me of the days when motocross men where men. Go on, wear that kilt atop the podium while the other nations look up to you and discover precisely what it took to win this event.

Now we’ve got Tommy Searle and Shawn Simpson to carry the flag as well and they’ll make their ancestors proud. Searle will drop down to the little bike and do what Malin did in ’94. The way I see it, Team USA have only won this event fewer than half of the times it has been held (shut out completely from 1947 through 1980), so that math follows that the seven-year streak that ended at that beach in Belgium will be followed by an seven-year losing streak. And with this strong Brit team, by the time it’s over, we might be back on top in all-time Nations triumphs, which is where we’ve lived for a long, long time. All it takes is a nice little win streak, starting on Sunday. And speaking of streaking … Tommy and Shawn, I’m looking up your addresses now. See you soon. Cheers!