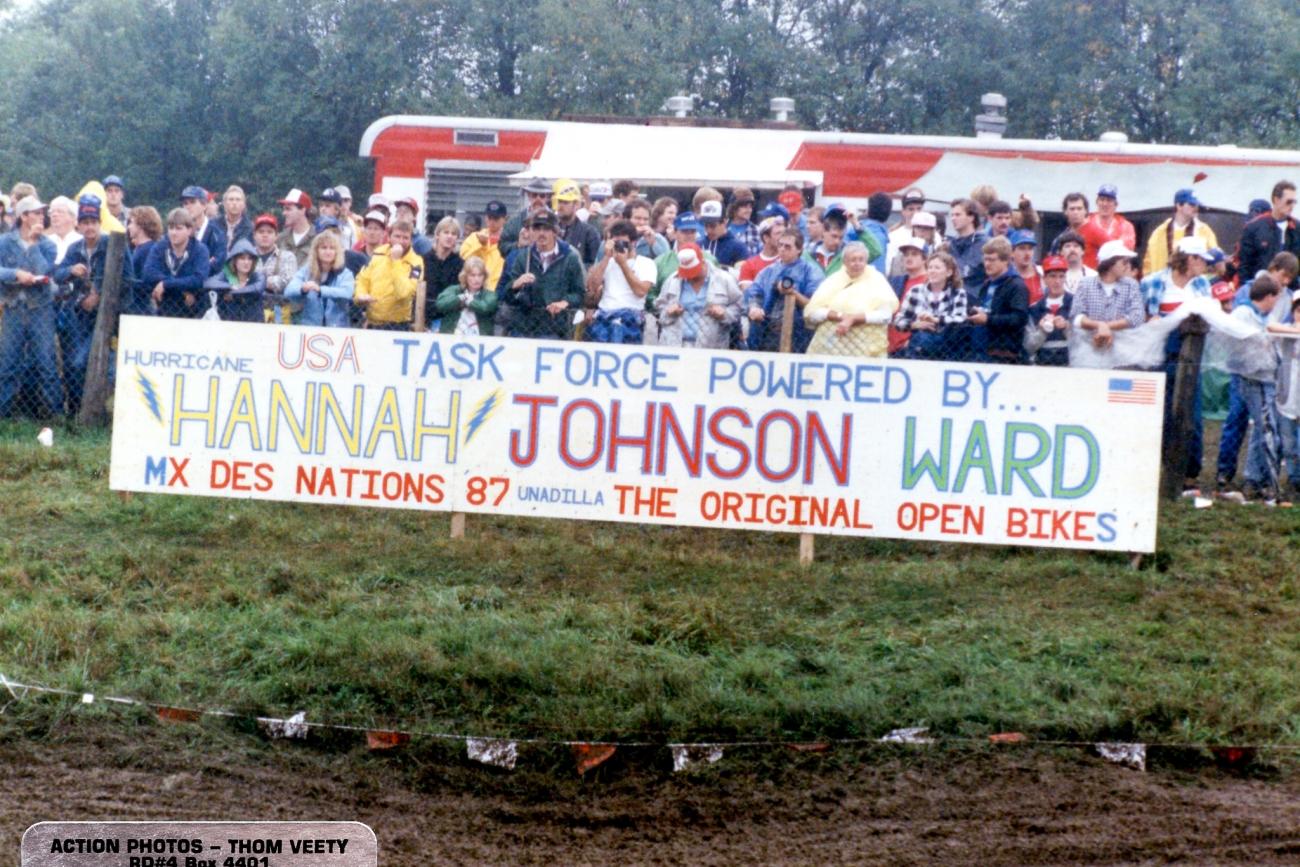 Racer X is counting down the days until the 2015 Monster Energy FIM Motocross of Nations, remembering each of the twenty-two winning versions of Team USA since 1981. Today, we reach 1987, and a home race for the Americans, albeit a muddy one!

September 13, 1987 marked the fortieth annual running of the Motocross des Nations. For the first time in its history, the event was set to run outside of Europe—at the plush, green Unadilla Valley Sports Center in New Berlin, New York. Team USA’s stranglehold on the Peter Chamberlain Trophy had reached six straight years, and as something of a reward, the Switzerland-based Federation Internationale di Motocyclisme (FIM) had let its cherished race out of Europe.

The AMA and Team USA manager Roger DeCoster took great pains in choosing their three-man line-up. Rick Johnson, 1987 AMA 250cc and 500cc National Champion, was the first rider tapped for the 250 class, then ‘87 AMA Supercross Champion Jeff Ward was lined up to race the big green Kawasaki KX500. But while it seemed that 1986 and ‘87 AMA 125cc National Champion Micky Dymond was the natural choice for that classification, history and sentimentalism entered the mix instead. The veteran Bob Hannah, a favored son at Unadilla, was chosen to ride a Suzuki RM125, and the howls could be heard all the way back in Westerville, Ohio, where the AMA was headquartered. The Hurricane was in the twilight of his career at that point, and while he had ridden on the Motocross des Nations team that had shown up in Gaildorf, West Germany, in 1978, Hannah—and Team USA—got smoked that day by 500cc tyrant Heikki Mikkola. But there was a grassroots appeal to having Hannah on the team at the track he helped make famous during those seventies’ Trans-AMA showdowns—the old man accepted the invitation.

“Wardy and I were the definite picks for the 250 and 500 bikes,” said Johnson, who had ridden alongside Ward at both the Trophee and Motocross des Nations in 1984. “We were the co-captains of the team, then they got Hannah to ride the 125. I felt good about that because he was good at Unadilla and I felt we’d come together and be a strong team.”

And while archrivals Johnson and Ward immediately went to work in preparing for the event, Hannah had a different way of seeing things; he wasn’t so cooperative with the rest of the team prior to the race.

“I always dropped the hatchet when it came to the Motocross des Nations and so did Jeff,” explained Johnson. “The week before we went to Pennsylvania to practice. I thought Bob would be there to ride with us, but he didn’t show up. At that time I didn’t know he was as negative as he was. I guess he thought Jeff and I were kissing each other’s ass by practicing together, but that wasn’t the story at all.”

A few years back, Hannah weighed in with his take on what played out leading up to Unadilla. Needless to say, in typical salty fashion, Hannah didn’t hold back.

“The odds were stacked against me from day one on that deal,” explained Hannah. “I was all set to be the scapegoat. Everyone was on my back. They were total pricks. They said they were all about the team and wanted to hold hands and ride together, yet they stuck me on the 125. They tried to get Ward to ride the 125, but he refused. He wanted to ride the 500 and Johnson wanted to ride the 250. So they tell me I have to ride the 125 and I say screw it!

“But then Suzuki comes back to me and says, ‘Bob, you have to do it! It can be prestigious for us!’ So I tell Suzuki to get me two works bikes. I get them to put two mechanics on my test bike, and then they had them put Randy Bruninga on my race bike. I didn't want anyone messing with Randy.

“Myself, I ran six miles a day for twenty-one days straight for that race,” continued Hannah. “I never missed a day. I also rode every single day. Johnson and Ward were all over me because I wouldn't practice with them. I was more like, ‘Leave me alone. Don't babysit me. I know what to do.’ DeCoster was smart enough to leave me alone.”

On Saturday afternoon before the race, Ward Robinson’s Unadilla circuit was in perfect form, according to Johnson. “It was old-school Unadilla with all the long green grass. In fact, the grass was so deep you wondered what was underneath it! Everybody on the team felt great. But on the way back to hotel after practice, the raindrops started hitting. I thought a little rain might be good, but a lot would be terrible. I woke up at least fifteen times throughout the night and would hear the rain. I’d look outside and the raindrops were so big…”

The next day, with the rain still falling, Ward and Hannah were sent to the starting gate for the opening 500/125 moto.

“The mud is going to make it a lot more even,” said Ward before the race to Cycle News’ Kit Palmer. “If the track was dry, hard, and hot, we would be superior. With the mud, it’s an even ballgame. Whoever gets the holeshot is going to be right up there.”

“I watched the first moto from the top of a trailer,” said Johnson. “Jeff had his goggles blown off in the first turn and he was in fifth or sixth place. The problem was that all the good teams were in front of him: Holland’s Kees Van Der Ven and Belgium’s Georges Jobe and guys like that were up at the front. Hannah got stuck on the first lap in the Screw-U and couldn’t make it out. It took him two or three attempts to make it. But Bob and Wardy hung tough the entire race.”

“One or two guys beat me to the first turn,” explained Ward after the race. “My goggles got caked with mud. They also got knocked down below my nose and I couldn’t get them up, so I had to take them off right there.”

“As I stood there watching, I began to get a sinking in the pit of my stomach,” admitted Johnson. “I knew I was going to have to win both motos if we were going to win. I could handle that, but I was going into a survival race. When you race in the mud, there are a lot of unknowns.”

Jobe won the moto, with Van der Ven second and Ward third. The young Frenchman named Jean-Michel Bayle was the top 125 rider over Dutch rider Dave Strijbos, Belgium’s Mark Velkeneers, and a mud-plastered Hannah. Belgium and Holland were in it to win, and the Americans knew it.

One hour later, the 250/125 class was summoned to the line. When the gate dropped and the pack slithered out of the first turn, it was Holland’s John Van Den Berk leading Italy’s Michele Rinaldi and then Johnson. By the second lap, Johnson was second and Eric Geboers of Belgium was third. Hannah was back in fifth, but the first 125. He would eventually work his way up to a fantastic third-place finish, while Johnson won.

It all boiled down to the last moto. Twenty-two thousand rain-lashed fans stood in ankle-deep mud and hoped Johnson and Ward could pull through.

“Going into last race I knew we had to have a win, either by Wardy or myself,” said Johnson. “We were both nervous before the moto. We sat and talked about starting positions and where we wanted to go. Ward was concerned because he had short legs, and being short in the mud can hurt you. Then I knew he was on a 500 that had a lot of power and would be able to float across mud.

“We both got good starts. We came around the first turn in third and fourth. In turn two we were side by side. We looked over at each other and Jeff gave me the nod to go.”

“I let Ricky by,” explained Ward of the strategy. “I knew he had just raced and I wanted to follow his lines.”

“[Ward] let me through and that put me into second behind Van der Ven, who was so smooth he just didn’t make a mistake,” recalled Johnson. “I started thinking, I can’t sit behind him… So I rammed into him to try and upset him. When I finally got by him I just roosted and roosted him. I hit every bump a bit short and just went ‘braap!’ trying to fill his helmet up with mud and maybe and knock his goggles off.”

Once through, Johnson was gone. Van der Ven would hold second while Ward pushed into third. They would stay there until it was all over. The Americans had won again—albeit by just 2 points over the Netherlands and four over Belgium.

“Those [European] guys could have won just as easily as we did,” said Ward after the race. “It was all up to the last moto. I’ve been in this situation before. We had to win.” Which is exactly what they did.

Back in the pits, Ward and Johnson celebrated, but Hannah was nowhere to be found.

“He wasn’t around,” explained Johnson. “Wardy and I stayed side by side in our trucks the whole weekend while Bob stayed five trucks away from us. It sucked. I wanted to celebrate with him after the race, but he had to have his hard-guy attitude going the whole time.”

Here’s Bob Hannah’s memory of what was, undoubtedly, one of the finest moments of his career: “It was one of the worst days ever. It rained like hell. In the first moto—when the 125s ran with the 500s—I got knocked down on the opening lap and it took me three times to finally get over the hill. I was dead last. I rode my ass off in that moto to get back to ninth overall.

“In the second moto, only Rick Johnson and Eric Geboers—both on 250s—beat me. I beat everyone else and won the overall in the class. It was a no-win situation, yet I had won. Thank God. I was never so happy to have a race over in my life.”

The Unadilla race was truly Hannah’s last hurrah. He never rode for Team USA again and would retire completely two years later, though Johnson and Ward would both return to the team. The ’87 team would reunite one more time, and that was to go visit then-U.S. President Ronald Reagan at the White House.