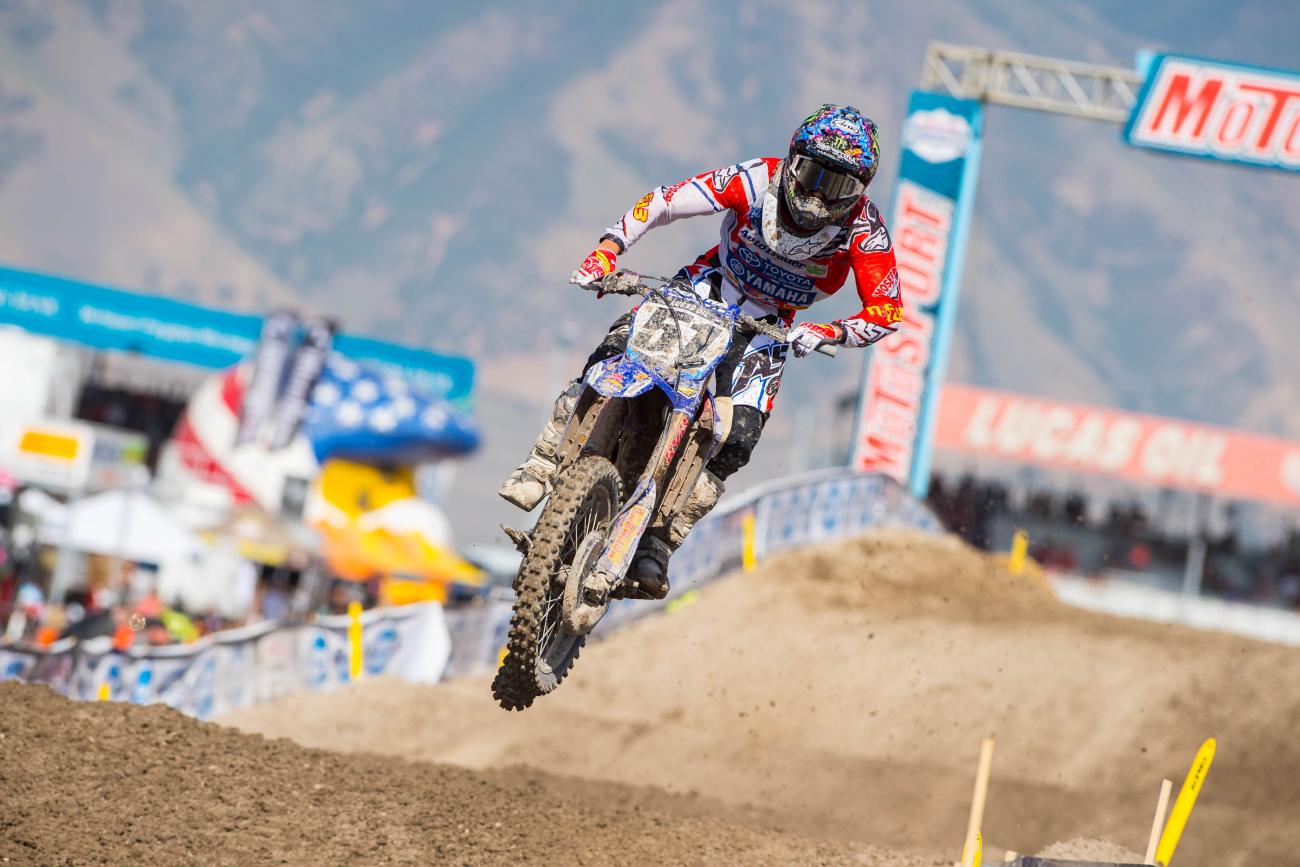 Never does the U.S. professional supercross and motocross season feel as long as it does at the end. The Ironman National closed twenty-nine weekends of racing with only five weekends off. If you go check last week’s Instagram activity from your favorite rider, you’re likely to see vacations, beach time, hangouts, and relaxation. Even Ryan Dungey put the work aside for a week!

The season continues for Team USA’s Justin Barcia, Jeremy Martin, and Cooper Webb, though. They have to stay sharp and fit to be ready for the Motocross of Nations in four weeks time. Also, there are some small bike changes for Europe (mostly fuel) that have to be accounted for with some testing. Webb also has to adjust to the 450 he’ll race in France.

I went to the JGRMX track in North Carolina yesterday to watch Barcia at work with some suspension testing, alongside lead suspension tech Jonny Oler and technician Spencer Bloomer. This wasn’t des Nations-specific testing, but rather Oler felt he could learn and gain more on suspension setup even at the end of the Lucas Oil Pro Motocross season. He and Barcia wanted to keep progressing and get a head start on 2016, but the extra testing will also pay off at des Nations.

“The goal today is to come up with four different setups that Justin will know and understand,” said Oler. “This way when we’re in practice over there [at des Nations], we won’t have to guess. He’ll know what options we have, he’ll know what feel he’s looking for, and he’ll know which one of the setups goes in that direction.”

Some recent des Nations have featured totally different track conditions than we normally see in the US (read: deep sand), but the track in Ernee, France, isn’t as much of a mystery, as it hosted the des Nations in 2005. JGR even called up old friend Eric Sorby, a Frenchman, who told them it’s like Unadilla. This year, Team USA is not planning to do any extra riding or testing while in Europe. Team manager Roger DeCoster has expressed that there’s so much riding on the race weekend, including the GP-style forty-minute practices and the Saturday qualifying races, that he’d rather the riders save their energy for Sunday, instead of pounding out motos late in the week. The team went the other route the last few years and it didn’t work, so this appears to be a change in strategy.

Team USA hasn’t won the race in three years; no doubt everyone is analyzing what can be changed, what went wrong, and what can go right. Recently there’s been talk about the Grand Prix riders using completely different suspension setups, most of them notably softer than the riders based in the U.S.

“Just the way things have gone for the team the last few years, I think it would be a good idea to have some significant options on the table and ready to go,” says Oler.

Of course, this all means Barcia, Webb, and Martin keep grinding while most of their peers get a break. Barcia told us recently that it doesn’t worry him.

“I’ve been injured enough [this year], so I don’t really need a break,” he said after the Ironman National. “Ryan’s [Dungey] been hammering for like however many years straight, so he deserves a little rest. For me, I’ve been injured and I need to build my base up and just keep it up. You’ve got your routine and you just stick with it. There’s no sense in taking time off.”

Barcia said he did take time off the bike last week, but he didn’t stop training. He’s done a little bit of running in place of bike riding just to mix it up, but for the most part, he’s still hammering down to be ready for Ernee on September 27. The team will do some extra testing for the new fuel, and then Barcia’s mechanic Ben Shiermeyer will build two race bikes, as FIM rules allow two bikes for the event (in case of major damage in a moto, a team could just roll out a backup bike for the next moto). Next Monday, the bikes get crated and shipped. Then it’s time to hope for the best.