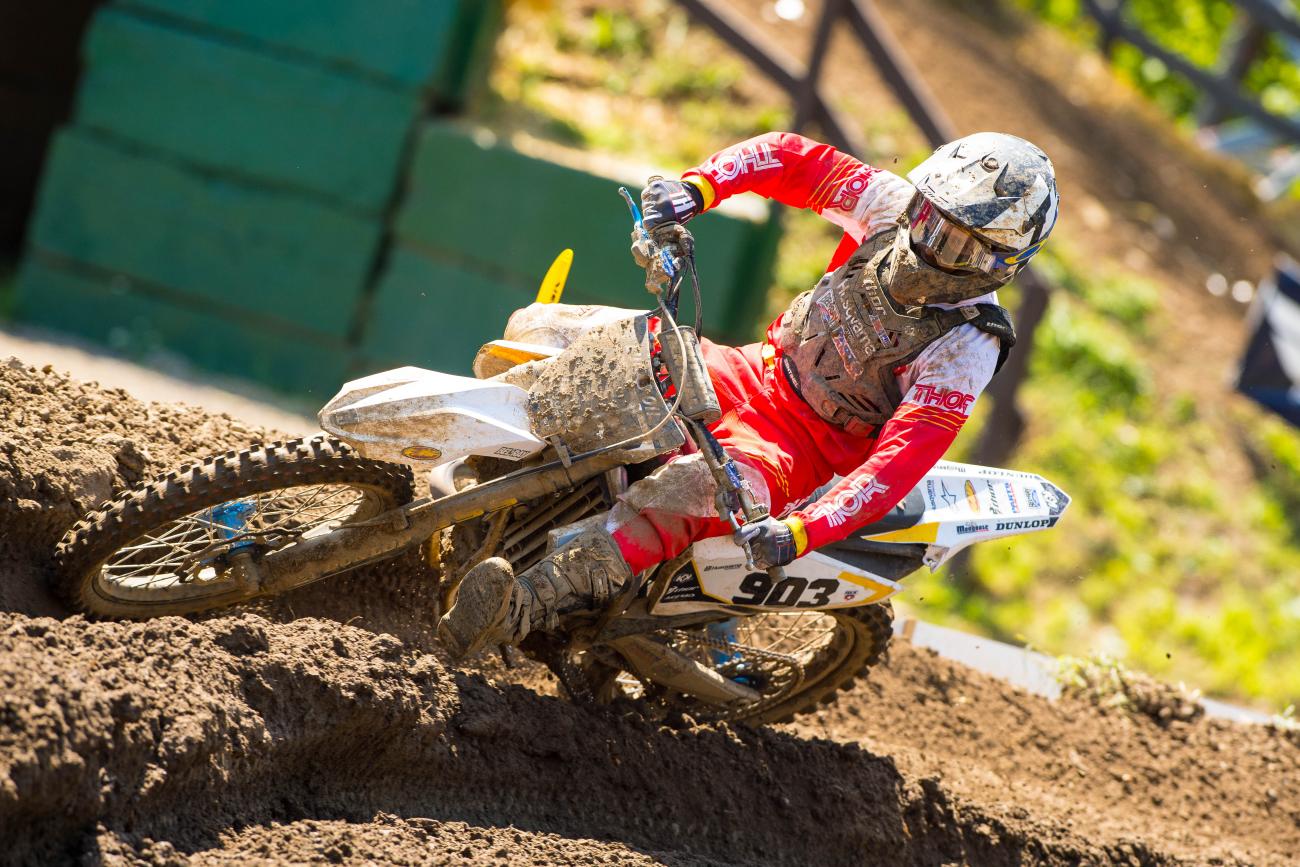 As a frustrated Canadian motocross fan whose country just shoots itself in the foot year after year and can’t sustain any good fortune, I was excited to see the plethora of Canadian racers lining up for this past weekend’s Ironman National.

Want some examples? Our national champion Dusty Klatt got a Star Racing Yamaha ride one year and promptly got landed on by J-Law at his second-ever supercross race; he was never the same again. In fact, he was back home before the year ended. Dean Wilson lived in Canada for years and years—heck, he even raced for Canada at the Motocross des Nations one year—before deciding he wanted to become Scottish again.

We finally got our act together and sent a team to the Motocross des Nations last year and made the A Main! Then, because of politics, the ringleader of the CMA decided that Canada wouldn’t be sending a team to the annual Olympics of Motocross this year, so we’re the laughing stock of world motocross yet again.

With the series up north ending last weekend, we saw a grand total of six Canadians line up Saturday morning to take on the world’s best. Here’s a look at all of the riders and a recap of their days.

Colton, one of the very best riders Canada has ever had, showed yet again that he’s got the speed and skill to do well in America with a couple of consistent and strong motos. In fact, in the first moto he pulled a great start AND PASSED RYAN DUNGEY!!! Yes, Dungey almost ate poop after he hit a big kicker and shot off to the outside, but still…. At that point Facciotti was in second! Christophe Pourcel was first, and we know Pourcel gets a tad tired and we know it was hot; therefore; it was stamped that COLTON FACCIOTTI WAS GOING TO WIN THE MOTO!!!!

Oh, Canada, indeed! Well, it didn’t quite go that way. But seriously, these are good finishes but it doesn’t prove anything to me. I know Colton can do well against the best riders in AMA Motocross—he’s that good. Colton was battling a bit of a sore back as well, so this is even better. After the race he gave me his thoughts.

“This was kind of a one-race deal, so I just wanted to come have fun and try to get some good results,” Facciotti said. “The goal was to get a couple top-tens. A little bit off that, I guess. I just kind of struggled. It’s a little different down here. It’s a little bit faster pace, obviously, and the track was gnarly today too, so that took me a little while to get used to that. The braking bumps were up to my neck it felt like. But just kind of soldiered through the day. Got a good start the first one, bad start in the second one. Kind of ended up in the same spot both motos [battling] with Shorty [Andrew Short] there. Definitely ran up there with those guys, just need to be down here more.”

Yes you do, Colton, yes you do.

“T Dags” is Husqvarna’s rider in Canada, and he’s raced a few times in the USA. Of course, if you’re around GPF in the winter, you know Tyler and his brother Jeremy, who also raced this past weekend. They’re mainstays there. By the way, Tyler was in the unseeded practice and qualified fifth overall. Yes, you read that right, and, yes, that was awesome.

“Qualifying fifth was cool,” Tyler said. “I get that the track was a bit smoother than in the seeded, but it wasn’t like Southwick; I still had super-deep, long ruts and monster jumps to deal with.”

Tyler got a poor start in the first moto, though, and also got caught up in a crash up Godzilla (the jump, not the monster), so he was way, way back on the opening laps. At one point he was thirty-third, so to make it up to twentieth was a nice accomplishment. You couldn’t miss him out there, as his rear fender broke and was pointed straight up in the air.

In the second moto, he started twentieth and sort of followed Facciotti around to make it up to thirteenth. Very solid. He wasn’t blazing fast, but he is in great shape and can handle anything you throw at him. Plus, he’s not intimidated by anyone out there. In the second moto, he finished about twenty seconds back of Facciotti, and in the second half of the Canadian Nationals, he was usually further behind Colton than that. So that gives you an idea of how well he did.

“Well, I really enjoyed myself,” he said. “First thing that pops into my mind would be the intensity of the first two laps. So much power and energy of forty guys on the rev limiter going for it can almost collapse your lungs like being in a vehicle with too much bass.

“It's crazy how different the tracks develop in AMA with the jumps so big, high speeds, big breaking bumps, my suspension was set up way to soft. I literally broke my rear fender off from bottoming so hard everywhere! I consider myself to be in good shape and I am more sore today than the first GNCC race in Florida where it was three hours of whooped out sand. So it's surprising how far off I was with set up. Getting to mix it up with different racers that normally only I only get to watch definitely sparks interest in wanting to do it more often.”

GRADE: A (Yes, same as Facciotti because I think he rode better than he had been in Canada, and he was out of a van—and because after the race he was loading everything on his own into said van.)

Benoit, the two-time 250MX champion, normally rides a KTM 250 two-stroke up north, so to ride that all year long then jump on a KTM 450 SX-F seven days later and line up for your second ever American national is ballsy. I like it—something his mentor, the great Jean Sebastian Roy, would’ve done. In fact, I remember JSR sleeping in his pickup at Unadilla Saturday night and then busting out a top-ten the next day. See if Ken Roczen will do that!

Anyway, Benoit was solid all day, and to score points in both motos with all the above things going on is strong. He got decent starts and sort of stayed where he started in both motos. One thing all the Canadians mentioned to me was how rough the track was compared to their national tracks, so obviously Benoit’s fitness was fine.

“I really liked my experience. It was only my second American race ever and I had only three days on the 450 before the event. I was going there to have fun without any stress,” Kaven told me. “Like I heard from other guys over there the track was really tough. I am not shy to say that I wasn’t fully comfortable on it. We never get track conditions like that in Canada. I hope next year I will be able to do more races in the U.S. I was surprised with the number of entries. Overall I’m happy with my results.”

GRADE: A (C’mon, bro, he normally rides a two-stroke! He only had three days! He scored points both motos!)

I have to be honest—I thought Keast would struggle to qualify, as he’s not exactly a burner with one-lap speed. He’s a veteran rider, once one of Canada’s best, but now working full-time and winding down a nice career. Like Tyler, he benefitted from being in the unseeded practice (you Americans thought you could hold the Canadians down by putting some of them in the unseeded practice, BUT WE SHOWED YOU!) and qualified thirtieth overall.

Keast is just a hammerhead out there, so once he made the motos, getting to the end wouldn’t be a problem. Solid and steady—that’s Kyle Keast.

“First off, I was surprised how easy it was to get through will call, how organized they are and how quick they had the rigs and people parked,” Keast said. “I thought the weekend went pretty good. I was a little surprised with qualifying where I did. I honestly thought with that many guys I would have to go the LCQ races. The track was the roughest and gnarliest track I have ever ridden. The braking bumps were like little jumps out there. I’d say it was the best-prepped track I've ever ridden and one of the coolest. I would love to do more next year and had a blast.”

GRADE: A (Yeah he didn’t score points, but he qualified easily even though I thought he would struggle. Watching him out there was epic, as he just leaned into some riders and scared them off their lines.)

“Jer re-aggravated a back injury that he has been dealing with for a good part of the season. He jacked it up a bit in a first-moto crash at Walton and then thought it would be good for this past weekend, but was too sore in practice so he came in early and didn't go out for qualifying race.”

I would’ve liked to have seen Jeremy, who raced 250MX all year long, on the smaller bike at this race, but he wanted to try the 450. And I think he would’ve made the motos if not for the injury.

Shawn normally rides another brand but decided to join the GDR Honda guys for this American adventure. Canadian national #27 in 2016, Robinson’s a good rider, and going through the whole national experience should make him better prepared for his Canadian series next year.

“Robinson didn't qualify in practice,” Schuster said. “But in his LCQ race he had a decent start going, but got bumped off the track, and couldn't really make up any spots to move ahead.”

GRADE: A (Gotta give it up to Shawn for trying his best out there!)