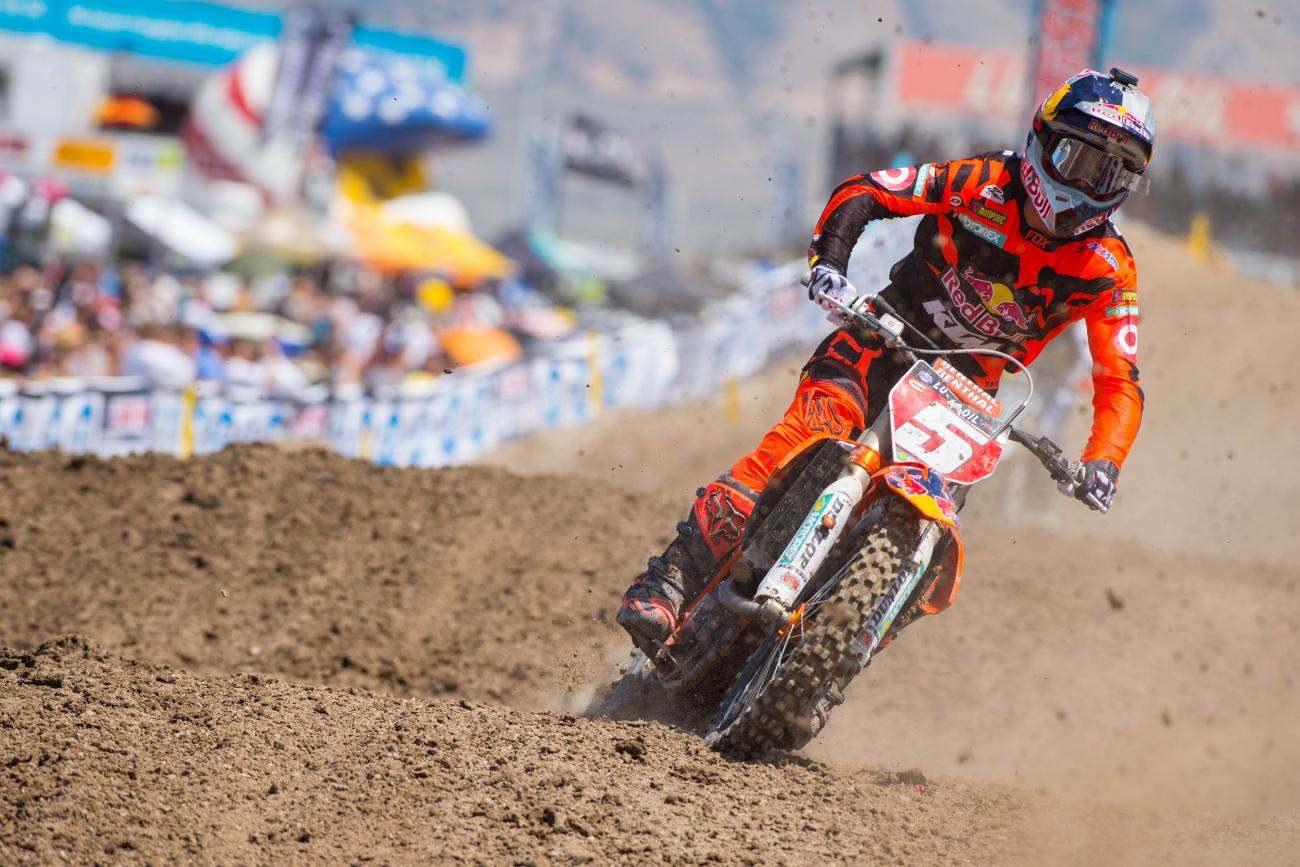 Ryan Dungey has accomplished great things this year, including one big side project. It would seem he has finally shed an old inaccuracy, a reputation he has but doesn’t actually deserve. See, because Dungey is so consistent, people say that he “takes” a second or third when that’s all that is there. Or that he “gives” people wins because he looks at the big picture.

That is absolutely not true.

Dungey races to win, not podium, and he has all year. He has in all years. Yes, he’s always on the podium, but the seconds and thirds are the mere result of trying to get first. For Dungey, it goes back to that old "Go fast without crashing" ability he has on lockdown. Just because he’s not crashing doesn’t mean he’s not trying.

"Oh, yeah. I try to win every race," he said after Barcia edged him for the RedBud overall. "Can’t play it safe. You’ve got be smart and definitely make the right choices, but when it comes down to each race, I want to win and I try to do everything in my control to do that. But in those areas where things are sketchy…. You need to know. I think, as a rider, you know what you can and can’t do, and we’re pushing the pace and you’ve got to know where to push and where not to. Big picture—made ground today. But I wanted the 1-1 for the overall. I feel like I’ve been winning the first moto—that’s been great—and I want to continue to do that without a doubt, but I also want that second-moto win as well."

He got the 1-1 the next weekend at Millville. "I was looking for that 1-1," he said. "I had won that first moto, but I really wanted that 1-1 just because I hadn’t done that all year, and I really feel like it was time to get that done as well. Not greedily or anything like that, but that was my goal today regardless of being at the hometown race."

The last few weeks have really provided the proof, clear for all to see, because he went 1-1 at Unadilla and Utah, when he didn’t need to win either for the title. At Unadilla, he didn’t even need to win the second moto to win the overall.

By stomping the competition today, Dungey makes his life a little easier in the future.

"We were pushing a good pace the whole moto and really fighting for it," he said of his Unadilla second-moto battle with Ken Roczen, who was out of overall contention due to a first-moto crash. "I know he really wanted it, as did I. Even though it didn’t affect the overall for me, I still would like to take home maximum points and an overall. I think a little bit of High Point, that one time he edged me out there, so I really wanted to fight for this one. It was good to hang on strong and come away with a 1-1 win today. It was exciting."

Even after locking up the title in the first moto at Utah, he went after Roczen in moto two, just to win the overall.

"The opportunity to grab the championship was there, but the motos still needed to be raced," Dungey said on Saturday. "As much as you want the championship, you still have to do your job. My mentality coming into this weekend was to get off the gate good and get two solid moto wins. If we could do that in the first moto, the championship would be there, but I didn’t want to get caught off guard in the second one—I wanted to go out there and win that one too. It doesn’t look very good if you don’t. It looks like you’re slacking off. Every race and every win is important."

Dungey knows consistency puts you in contention for titles, but that’s just the start. To win the title, you actually have to win races. In 2014, Dungey and Roczen both scored twenty-one moto podiums in twenty-four motos. But Dungey only won six motos to Roczen’s eight. This year, Dungey has twelve moto wins already, with two motos still yet to run. In 2013, Dungey again reached the podium twenty-one times, but won just five motos. Ryan Villopoto won a whopping eighteen and romped to the championship. He actually had podiums in twenty motos, one less than Dungey. He also won the title by over 50 points.

By stomping the competition today, Dungey makes his life a little easier in the future. Barcia got a moto win at Budds Creek and suddenly caught fire, and Dungey had a fight on his hands at the next races at RedBud, Millville, and Washougal. Now Roczen is back on the gas, so Dungey is trying to prevent his rival from getting all of his confidence back with a win. If Dungey can shut everyone out the last round, he’ll leave them thinking about that the entire off-season. Because even though Roczen and Barcia might be consistently on the podium with him, they too feel that if they’re not winning the race, they’re not winning at all.