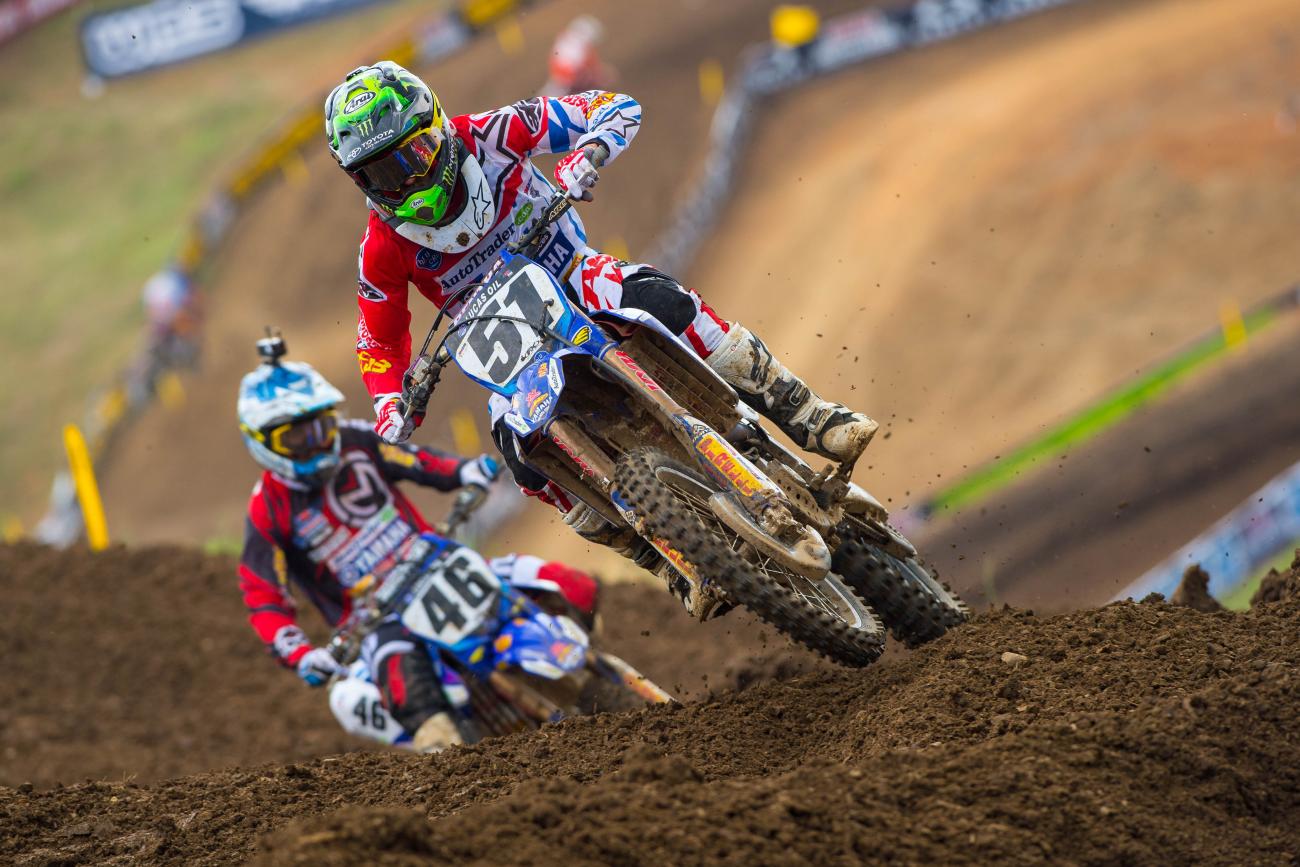 At the season-opening round of the 2007 supercross season, I shook Coy Gibbs’ hand for the first time. At that point in time, the rumors and hearsay about Joe Gibbs Racing assembling a supercross team for the 2008 season were at maximum volume, and Coy, Joe’s son, who it was claimed would head-up the operation, was at the Anaheim Supercross to scope things out .

Eight years removed, JGR is now one of the elite teams in the sport, with a consistent presence on the podium. Coy Gibbs recently sat down with Racer X to talk about the team’s past, present, and future.

Racer X: Coy, I was around you and the team at the final supercross of the year back in May. In talking with you guys throughout the day, everyone seemed a bit road weary, as the season, at least up to that point in time, had been something of a struggle. Having said that, I also got the distinct impression that by no means were you guys going to give up. Thoughts?
Coy Gibbs: Yeah, I think a lot of stuff played into the season at that point. Obviously, having a new rider, they sometimes click a lot faster with some guys than they do with others. Plus, remember, during the off-season Justin [Barcia] had pretty substantial surgery there on his ankle. Unfortunately, he got nicked again and he fractured his pelvis. That definitely got us back. And [Weston] Peick broke his foot at the second race and broke it again at the third race. It was a tough one, but I think for us, though, as a team, we’ve been through so much that the guys don’t really panic. Obviously, we all want to do well and we all want to run up front—and you get frustrated when you’re not running up front—but the difference between frustration and going crazy can be huge. We’ve been through a lot during the last eight or nine years, and it’s been good. Then, all of a sudden things just clicked. I don’t really know if it was one reason why, but Justin started running great, and Weston’s definitely had some good runs outdoors. It’s been a much better outdoor series that it was supercross, for sure.

You had mentioned to me that despite the injuries and disappointments, you and the team were going to stand by your guys. You were going to see it through, correct?
Yeah, I think that’s part of it. That’s part of any team. You’re definitely not going to give up. And that’s kind of what I’ve been on my whole life—teams. Sometimes things are going great, and sometimes they’re going bad. A lot of times it can be cyclical and they come and go. We all want to run good and run up front for all of our sponsors. It’s fun when you actually reach that point, but that’s actually when it gets hard [laughs].

As the season continued on, did JGR and Yamaha begin to collaborate to get the YZ450F race bike operating at an optimal level? During the summer months, the bike appeared to keep getting faster and faster.
We definitely worked closer this year than we have in the past years. They have a lot of valuable information that comes from Japan and the R&D side and the things they are working on. Every little thing helps, for sure. I don’t think it was one big major change or anything like that, but just adding up all the work we’ve done over the years—I think the bike is really good right now.

When Justin went out and won at Budds Creek, what did that mean for you and the team?
It was good. I was pumped for the guys, I was pumped for Justin, and I was pumped for the guys that work hard every day. It justifies everything they do when you can run up front and win. It was a weird one, though, because it was so muddy out and Justin was laughing because he said, “Hey, everybody thinks I run good in the mud now!” And then he said, “I run [good] when it’s not muddy, too.” And next week he proved that. It was funny. We laughed about that all week. I get excited for the guys. It’s a lot of work and a lot of travel. It’s the same amount of work no matter what. It’s the same if you run up front or not run up front. It’s definitely rewarding when you can do it.

Joe Gibbs Racing has been competing now since 2008. Is the team holding true to the vision you’ve had for it?
The reality of it is that it takes a long time to get established and win championships. It took us ten years on the Cup [NASCAR] side. So if you use that kind of as the gauge, it takes time. The hard part about racing is just financially making it ten years. I don’t care what form of racing you’re in; I think that’s a huge accomplishment going into the next year. Also, we’ve got a lot more resources than we did when we started, and we kind of keep gaining every day. If you look at it, that’s kind of what my dad [Joe Gibbs] says. He says, “Hey, it takes ten years before you really start hitting it.” You don’t really want to believe that the first couple of years, but the truth of it is that’s how long it takes. I’m excited about it. We’ve definitely had ups and downs over those years, but in those hard times it definitely makes you a tougher person.

And as you have alluded to in the past, racing motorcycles is a lot different than racing cars.
The biggest variable is just the health of the riders. I don’t know how they do it. It would be like playing twenty-nine football games. It’s tough. It wears on them. I think it’s too many races; it’s too long of a season for what they actually do. We definitely want to go out there and perform and put on a good show for the fans, but you also want to have them around for a while. You don’t want to grind them to a pulp and spit them out. You see a lot of guys get worn out. It’s so physically demanding on them, for sure. The car stuff—I’m not saying it’s not hard, but this is a lot harder physically. You have to be in really good shape, especially on the outdoor side. And the whole industry is a little bit different. I just go back to how fortunate we are because we get to leverage the whole car side because, whether it’s machining or engineering or questions we have, we have a huge operation over there that we just need to walk over to and talk to them and ask for advice from the fifty-plus engineers they have on staff. If we need stuff machined, they’re running twenty hours a day now, so that’s a huge benefit and something we’re thankful for.

So there is both an engineering and technology transfer that goes from the JGR NASCAR operation and right into the supercross team?
Well, yeah. There’s not a ton of crossover, but racing is racing. The day-to-day stuff, accounting and sponsorships and relationships and things like that, are the same, but the bikes are a lot different. Obviously, a ton of engineering doesn’t cross over, but if we want to build a new part or check something out, those guys are really valuable because they’ve done it hundreds of times over there. We don’t just sit there and think about what we’re going to do; we just walk over there and grab one of those guys and talk to them for ten minutes and then hit it. That’s awesome. We bought a lot of equipment last year. We just bought a CNC machine [Computer Numerical Control] that we’ll move into the Cup shop and have a fully dedicated shift on every day. That’s exciting to me, and something I’ve wanted for a long time. When it comes to making parts and pieces, we’ve got that covered, and we can do that really fast and have a really fast turn-around. It’s a huge benefit.

You played NCAA college football for the Stanford Cardinals. Last time I checked, they were pretty good. Does any of that football stuff find its way into the JGR supercross squad?
I love the sport. It’s a tough, tough sport. I coach peewee football every year, and I’ve got the 9-year-olds out there—they don’t understand anything [laughs]. You’re teaching them and saying, “Hey, look, we have to work hard. This is not easy.” It’s fun to go through the whole process with them. I look at my guys over here, and the only one who really reminds me of a football player is Weston. I told Weston, “You missed your calling, man; you’re a middle linebacker.” As big is he is [laughs].... We tease him about that. I admire the football guys. They’re studs. I think the moto guys are right up there with them. What they do is amazing.

Then there is the approaching Motocross of Nations. Your guy Justin Barcia was picked to represent Team USA in France next month. Certainly an accolade, but then again, you have to pay for him and the team to get all the way over there, huh?
[Laughs] That one is hard. From a business point of view, you don’t want to do it because it costs money. Then you understand the tradition, the heritage, and the prestige of doing things like that. The bottom line is that it ends up costing money, and that’s one thing that is difficult for a race team. But my guys can do whatever they want. I tell them all the time, if they want to go, we’re going. Now they’re trying to convince me to go to France [laughs]

Have you ever been to the Motocross of Nations when it was held in Europe?
No! I’ve never been over there!

You have to go Coy!
[Laughs] I’m not a big world traveler here.

Oh, man. You have to go experience the Motocross of Nations in Europe. It really is something else.
Jeremy [Albrecht] has told me over and over how awesome it is. And I’m sure it is. I’m looking at it right now, but it’s a tough deal for me to go over there. I’m looking at it, but I’m not committing yet.

You’ve never been to Europe?
Heck no! Why would I go to Europe? I love it here [laughs].

But your guys are going and you don’t mind putting the money up?
No. It’s always up to them. If they’re excited about it and want to race something, we’re going to do it. I’ve never told them no. I always leave that up to them. The Motocross of Nations is the biggest one, and everybody is fired up about it, so, yeah, we’re going.

And will your guys run the Monster Energy Cup in October?
We will be there. We will be at Monster Cup, for sure.