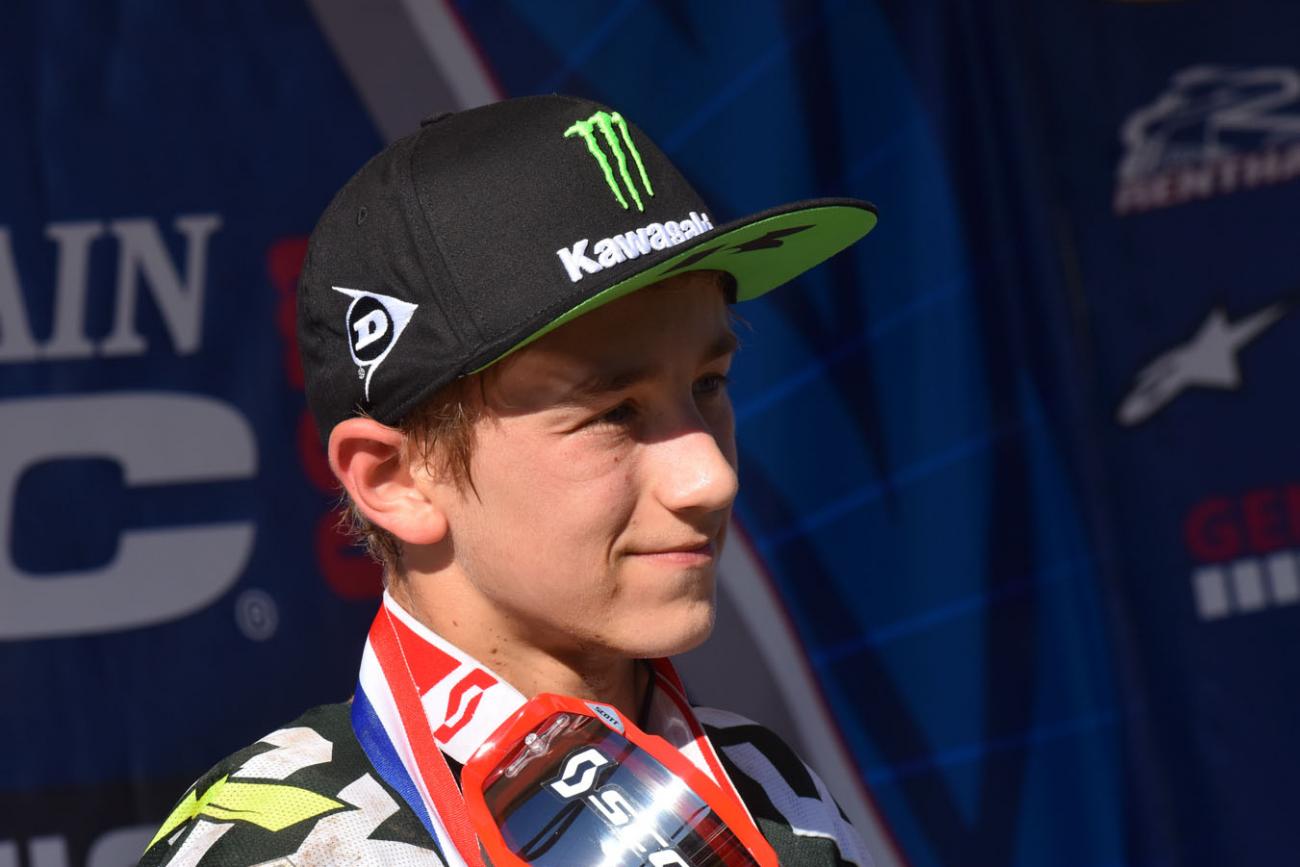 Garrett Marchbanks’ time in the Super Mini class lasted just one year. A year after winning the 85cc Mini Sr. (12-13) and (13-14) divisions and the AMA Motocross Youth Rider Award at Loretta’s, Marchbanks returned to the Ranch and won both Super Mini classes in 2015. The Utah native, who stands an imposing 5’8” at just 13 years old, will move to the B Class at the upcoming Mini Olympics in Florida in November. We caught up with Marchbanks at Loretta’s to talk about his week, his move to big bikes, and more.

Racer X: Tell me a little bit about your week. Big week for you.
Garrett Marchbanks: Yeah, definitely. Got two championships this week and won Super Mini 1 and 2. It was just awesome. The track was sweet. It was just perfect. The bike was on point. It was just awesome. Pro Circuit was helping me out with their motors, and JGR helped too. This year, after this race I’m going to the B class to Schoolboy 2 and 250 B Mod, so it’s going to be awesome moving up to the 250. It’ll be sweet.

This is kind of quick for you. You’re a bigger kid, but last year you were 85s so one year Super Minis and now B. Are you looking forward to it? Is it going to be at Mini Os?
Definitely. I’m going to be training really hard to see how I do at Mini Os. Hopefully I get to go, no injuries.

Where’d the man-child nickname come from?
I have no idea. It just came up one day, and it stuck to that.

Where are you training at now?
I’m training at Club MX right now, and hopefully it’ll be like that for the rest of the year. They’ve just helped me out so much and had me win four championships the past two years. It’s just been awesome.

Got a good Phil Nicoletti story for us?
Nothing too much. I haven’t seen him too much this year. We rode together a little bit. Whenever we did motos, when he comes up to lap me I’ll try and mess with him, but he always tries to clean me out every lap or something [laughs].

How much does it help you training with guys like that that are pros?
It helps me out so much. I’m in the A group and I’ll race some of the pro guys and just try to stay with them. I’ll just chase the guy up ahead or two. Even though it’s a guy that’s three seconds a lap faster with me, when they come around to pass me, I’ll just try to stick with them. It helps me out so much to ride with the big bikes.

So Utah to living in the East and also doing so well here at Loretta’s—that’s kind of crazy.
Definitely. I just came to Loretta’s one year. Well, not even this—we did Mini Os and went there, and Club MX came up to me, and my dad’s like, “Yeah, you might be going to Club MX.” I was like, “Oh, sweet!” They just wanted me to go train there. My dad wanted me to try something new instead of going to California every week. They just wanted me to try it, and after Mini Os I went over there and started training, and we’ve just been there for two years now.

Who’s there with you? Do your parents come, or are you on your own?
No, my parents won’t let me be there by myself. I’ll burn down the trailer or something [laughs]. It’s my mom, brother—my brother rides a little bit after I’m done training for the day. My mom stays there. I do school for a few hours. She stays with me. Dad’s home, works, pays the bills.

So growing up, though, you were in Utah during the winters and stuff. Did you train out there?
Yeah. On 60s when I was 8 from the beginning—I went down there right before I turned 8 and trained every winter, and then for the summer I’d come home and just train there. Then, before Loretta’s I’d go to California and get used to the heat and then just come here and just do my best.

Because they have the humidity here—it’s crazy.
Yeah, it’s crazy. I remember the very first year I came here. I won Ponca, won World Minis, and then I came here and choked, did terrible. I remember my first moto Hannah Hodges just beat me. I was so mad. My dad’s like, “You suck—you got beat by a girl!” [Laughs] I was like, “Thanks, Dad.” The last moto I finally got a good start and I was in fourth. I remember the first lap actually I came across the finish line, collided with someone in the air, crashed, and then a kid landed right on me and my bike. So I got hurt, couldn’t walk for about a month.

Then she [Hodges] beat you again?
Yeah, pretty much because I DNF’d [laughs]. Went home, and just next year came back as an alternate, first alternate. What’s crazy is I won all my regionals, and my mom signed me up, I think, a few minutes too late, so they just put me as the alternate. My friend, actually, Tanner Amarillas, broke his wrist a week before Loretta’s, and that let me go in. Won the moto, first moto out there, got the holeshot, won by fifteen seconds. My parents were like, “I think he won.” They weren’t sure. It sucked because my number got taken since I was an alternate, so I was 42 that year. There was an 82 in the race [Marchbanks’ usual number] and he was in last, so my mom’s yelling at me thinking I’m dead last. She was like, “You were terrible!” Everyone’s like, “Garrett Marchbanks won!” She starts running over there. I was laughing.

[Fellow fast minicycle rider] Pierce Brown’s from Utah too, right? Did you know each other?
Yeah, definitely. That was actually my first best friend. That was the very first kid I met racing. The very first race I went to. We didn’t really know each other, but he beat me. He lapped me. Went out there and there’s like a little arenacross track an hour from our house. We just rode together and trained from 50s to 60s. And then it started getting really close in the championships; we were all battling all the time so we didn’t train anymore together, really. We rode together quite a bit on 60s and 50s, and then after that, when we hit 80s, we just kind of split up and did our own thing.

Is it a coincidence that there are two good guys from Utah? Is there something there like a cool track or a good place to ride?
No, the tracks are terrible in Utah. The tracks are just like the dirt roads out here. The golf cart path down here—that’s how the tracks are. I have a track at my house, and it’s between a valley kind of and the mountains and I just rode that on 50s. My dad made it with a backhoe. It’s just kind of like a ghetto track. It’s good now, but I still don’t ride it [a lot]. Me and my friend were riding out there, and he broke his leg and we felt really bad. [It started because] We had seventy-nine acres out there, so we built a track right in front of my house, which we didn’t think the dirt was too good, but we still built it. It’s about a minute long now and the dirt is actually so good. It’s just that black, farm dirt. So the ruts are just like this. We go out there and ride together out there. That’s where I ride mostly [when I’m home]. I ride there maybe three times a week. I invite all the kids that I know to ride it and it breaks in. But the [rest of the] tracks are terrible. It’s always blue-groove, hard-pack. It’s funny because they’ll groom the track and then don’t water it and then it gets hard-pack blue-groove. Then at the end of the day when it’s all hard-pack, they finally water it and it’s just slippery. My dad’s out there like, “Hurry, go, go!” Yelling at me, I’m like hitting the brakes, my bike’s just sliding, and then I hit the rut and then I go. And the tracks are like fifth-gear wide open out there. So I’ll be going out there, and the bike will blow out some gears out of the bike. And I’m like, “Dad, I think the bike blew up.” The tracks aren’t very good out there. That’s why we go to California. And then now they stink. They’re always dry now. So we wanted to try riding back here [eastern], and now I’m at the Club [Club MX, in South Carolina].