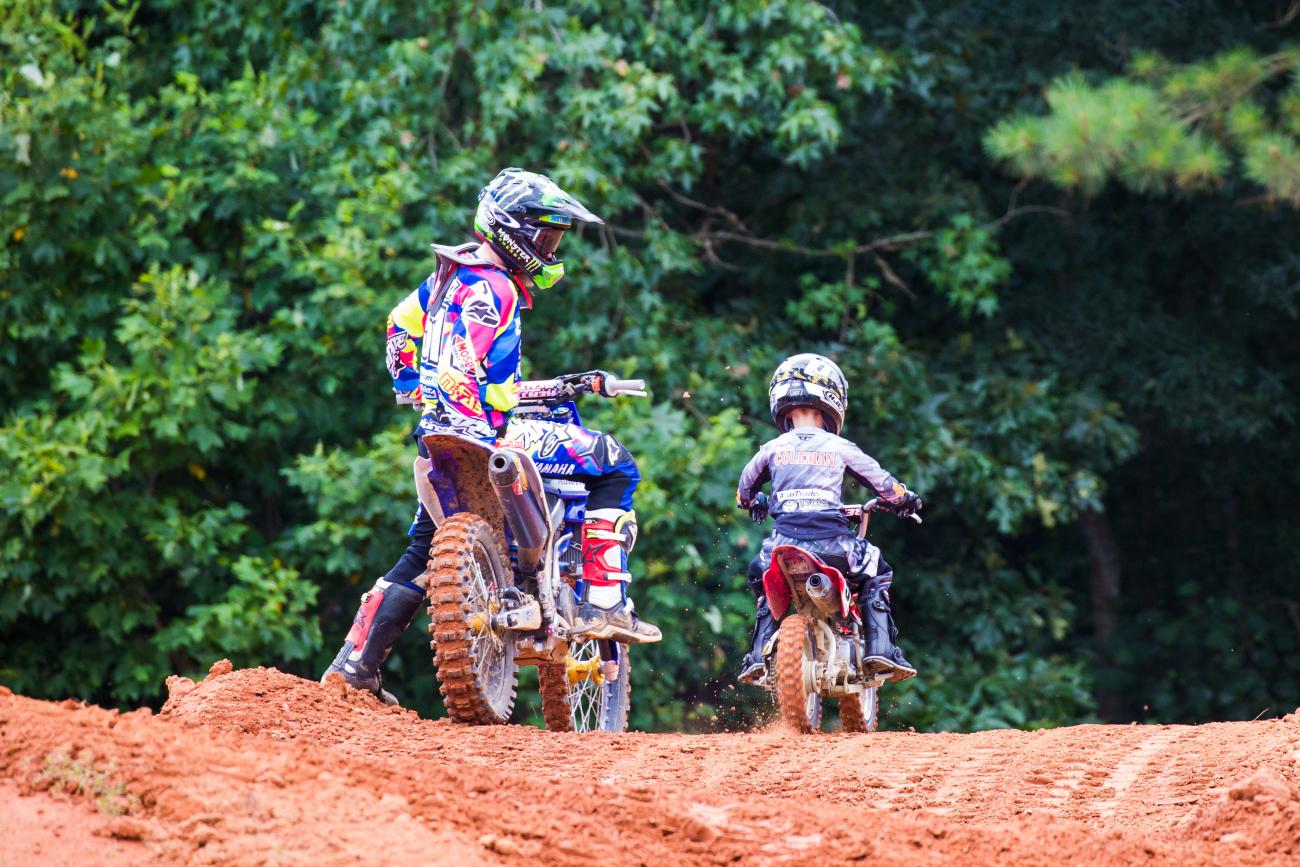 Justin Barcia doesn’t mince words when it comes to riding with others. He considers everyone on the track an enemy, and the goal is to win races, not make friends. He thrives off competition, and that’s what has gotten him this far.

But during his recent stretch of back-to-back wins in Lucas Oil Pro Motocross, Bam Bam actually found someone he wanted to ride with. The Make A Wish foundation was helping make a dream come true for 5-year-old Austin Coleman, who suffers from Cystic Fibrosis. Austin, from North Carolina, is a huge motocross fan and loves riding his Honda 50.

Make A Wish can do amazing things for kids, and Austin wanted nothing more than to go riding with a pro. Make A Wish worked with the Monster Energy Supercross promoters at Feld Motor Sports and the Autotrader.com/Toyota/JGR Yamaha team to make it happen.

The team really pitched in. They ordered up some new parts and pieces to trick out Austin’s bike, as well as a full set of fresh team gear—in kid’s size—courtesy of Max from Fly Racing. The JGR track crew went to work building a 50cc track right between the state-of-the-art JGR supercross and outdoor motocross test tracks in Mooresville, North Carolina.

The biggest part, though, was bringing Barcia on board to go riding with Austin. He was more than happy to do it.

“It was incredible,” Barcia told us. “I’ve done a lot of Make a Wish stuff in California. They bring a lot of kids to the races and that’s awesome. I enjoy doing that stuff. I don’t have a problem taking time out of my schedule to do things like that. But this was really cool.”

The team first brought Austin and his family to the motocross shop in Huntersville, North Carolina, where they showed Austin and his family his fresh bike, complete with custom graphics and numbers to match Barcia’s ride. They offered a look at the incredible JGR NASCAR Cup facility down the road, but Austin was so pumped on the bike that he didn’t want to let it out of his sight!

“We had to convince him that nothing would happen to it,” team manager Jeremy Albrecht said. “Then we were able to give him a tour of the NASCAR shop. But he was still really just thinking about his bike.”

After the shop tours and lunch, the team, Austin, and his family followed the team out to the test track. Barcia was already there with his mechanic Ben Shiermeyer, putting in his training motos in the morning so he’d have plenty of time to ride with Austin in the afternoon.

Albrecht unloaded Austin’s bike from one of the team’s Toyota Tundra pickups, and rolled it onto the gravel parking lot outside the garage at the test track. He fired the bike up and planned on pushing it over the gravel and onto some grass, but Austin was too pumped for that. “Let me ride it! Let me ride it!” yelled Austin, who swung a leg over and roosted right out of the gravel and over to the brand-new pee wee track. Barcia then fired up his YZ450F and headed over with him. It was time to go riding.

“They put the graphics on his bike and got it looking pretty cool,” Barcia said. “We built him his own track at Gibbs’, which was pretty awesome. I rode with him for probably an hour or so, talked a little bit. I thought I had a lot of energy and I was kind of ADD, but I couldn’t keep up with him. He was all over the place, riding, taking a break, drinking drinks. He was wild. He had a good time!”

After an hour of riding the peewee track together, with some stopping for rest and bench-racing, the group headed over to the full-on outdoor motocross track, where Austin got to watch Barcia go all out and throw some huge whips. Then everyone headed over to the garage to hang out for a bit, before the duo logged another moto at the peewee track. All told, Barcia and Austin hung out and rode together for about four hours, and then even headed back to the shop in Huntersville to take some pictures together.

“I’ll do it anytime, any place, anywhere. It was fun,” Barcia said. “The little guy was super-happy, and his parents were stoked. For me, to see his parents how happy they were, that makes it special for me.”