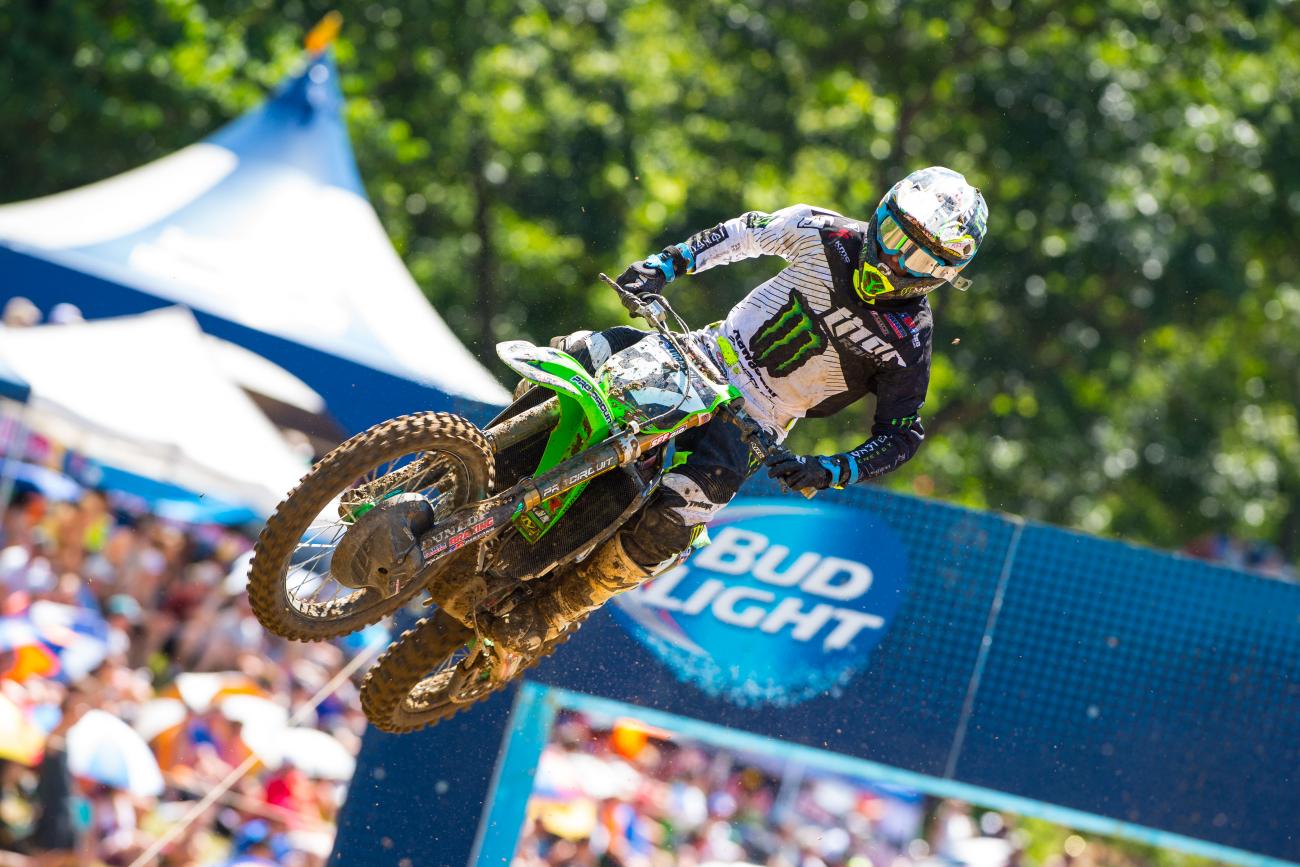 Washougal, Washington, is unquestionably the most scenic stop on the Lucas Oil Pro Motocross Championship. Just outside the Portland, Oregon, metro area, the road leading up to the track winds along a mountain river that belongs in a picture book. The breathtaking scenery is a far cry from the chaotic mesh of adrenalin, horsepower, and athleticism that lies ahead at Washougal Motocross Park.

The track at Washougal may be the most deceptive course the riders will face all year. So many videos and photo shoots are held here because of the beauty both on and off the course, and the seemingly perfect soil. I say seemingly perfect because Washougal’s soil is a cruel and unpredictable mistress. In practice, things will appear to be setting up so nicely for great traction and ideal conditions. Riders will be riding hyper-aggressively in an attempt to log that low lap time, using the tilled soil to its maximum traction. As the day rolls on, however, that soft dirt will harden up into a treacherous lay of land. The same intensity that the morning sessions allowed is simply impossible on the ever-changing Washougal course. The dirt will get harder and harder as the day grows longer. By the start of the second motos, the track is extremely hard-packed and throttle control becomes the theme of the race. It’s a huge change from morning to afternoon, maybe the most dramatic shift of the season.

Often times, we’ll see each year’s Washougal winner be a rider that many consider great at the finesse side of motocross. Riders like Kevin Windham, Ryan Dungey, and Marvin Musquin are the epitome of what I consider smooth, flowing, and finesse-savvy riders. All three of those riders excel at Washougal because of their ability to control rear wheel spin and maximize traction. This was one of the only courses (the other being Unadilla for the same reasons) where Kevin Windham could defeat Ricky Carmichael.

Last season, we saw Marvin Musquin come to Washougal and simply dominate everyone all day long, although Jeremy Martin seemed to be the class of the field everywhere else. Ryan Dungey was often able to beat his archrival Ryan Villopoto here at RV’s home race simply because he was so good at carrying that all-important momentum. Washougal is unique in that way. The dirt presents a great opportunity to shake up the results and offer some parody in the pecking order.

As for this weekend, the 450 Class certainly can’t be looking forward to another track that Ryan Dungey excels on. He’s running away with this championship and doesn’t look to be backing off the gas pedal anytime soon.

In the 250 Class, though, this is crunch time for the aforementioned Marvin Musquin. He’s in a must-win situation after losing 29 points in the last two rounds to Jeremy Martin. This is quite possibly his best track of the series, and if he can’t go in and steal significant points away from the defending champ, it might be sayonara to the likable Frenchman’s title hopes. The next two rounds will tell the tale for this 250 championship.

Cooper Webb is back! Webb’s 1-2 moto scores were enough to seal the overall victory in Jeremy Martin’s backyard. He certainly looked to be feeling the effects of the Minnesota heat, but at the end of the day, he was the one standing highest on the podium. Great ride from Coop, and I have a feeling he’s just getting warmed up.

Joey Savatgy rode really well all day at Spring Creek. He fought valiantly to fend off Jeremy Martin in the first moto, albeit while Martin was riding without use of his clutch lever. Savatgy was very good at Washougal last year, so look for another podium from Mitch’s best hope at the moment.

Ryan Dungey is kind of good at dirt bike racing. He has stretched his point lead significantly in recent weeks and is looking to be a lock for another title. He will win this weekend if I had to bet.

Justin Barcia may have lost to Ryan Dungey at Millville, but he’s still riding like a new man since Budds Creek. Whatever turned around for the #51, whether it was mechanical, physical, or mental, he’s a totally different guy.

Blake Baggett had a bounce-back ride at Millville. His late-moto charge to pass Ken Roczen had to feel great. Being the top-finishing rider for your manufacturer is always important.

Ken Roczen has struggled lately, much as he did in the middle of his 2014 championship run. He looked to be fatigued last Saturday, which can’t be calming for he and his team, RCH/Soaring Eagle/Jimmy John’s Suzuki. I was also befuddled as to why he wasn’t jumping the uphill triple when everyone else seemed to have it dialed in. Hopefully they can figure things out and get him back in the fight. He makes racing better when he’s firing on all cylinders.

Marvin Musquin has had a rough couple of weeks. He entered RedBud with a solid 10-point lead, but just two rounds later sits a daunting 19 points down. Musquin looked to have a firm grip on this championship, but with his ailing wrist and untimely crashes, things have shifted. He needs to right the ship at Washougal.

Justin Brayton was the victim of a French revolution at Millville, led by Christophe Pourcel’s front wheel. Brayton’s spokes were removed from his wheel, leaving Brayton face first in the dirt and deciding to save it for Washougal. Tough break for Justin, as Millville is historically a good one for the Iowan.

Cooper Webb wins the overall in the 250 Class, making it two in a row.

Fredrik Noren gets fifth overall, his best finish yet.

Justin Barcia holeshots a moto… Oh wait, I said bold predictions. Okay, Justin shaves his beard only to realize that a flock of hummingbirds had taken up residence in his facial mane.

Trey Canard lands on the podium in his first race back and immediately plants himself into the Motocross of Nations debate.

After seeing their engine package every week on satellite TV, North Korea’s Kim Jong Un attempts to recruit the JGR engine crew to help with his ballistic missile/space program. Coy Gibbs and crew slap down North Korea’s grand poobah with a particularly nasty backhand while Barcia and mechanic Ben Schiermeyer beard him to death. Yes, I just used beard as a verb. #merica.