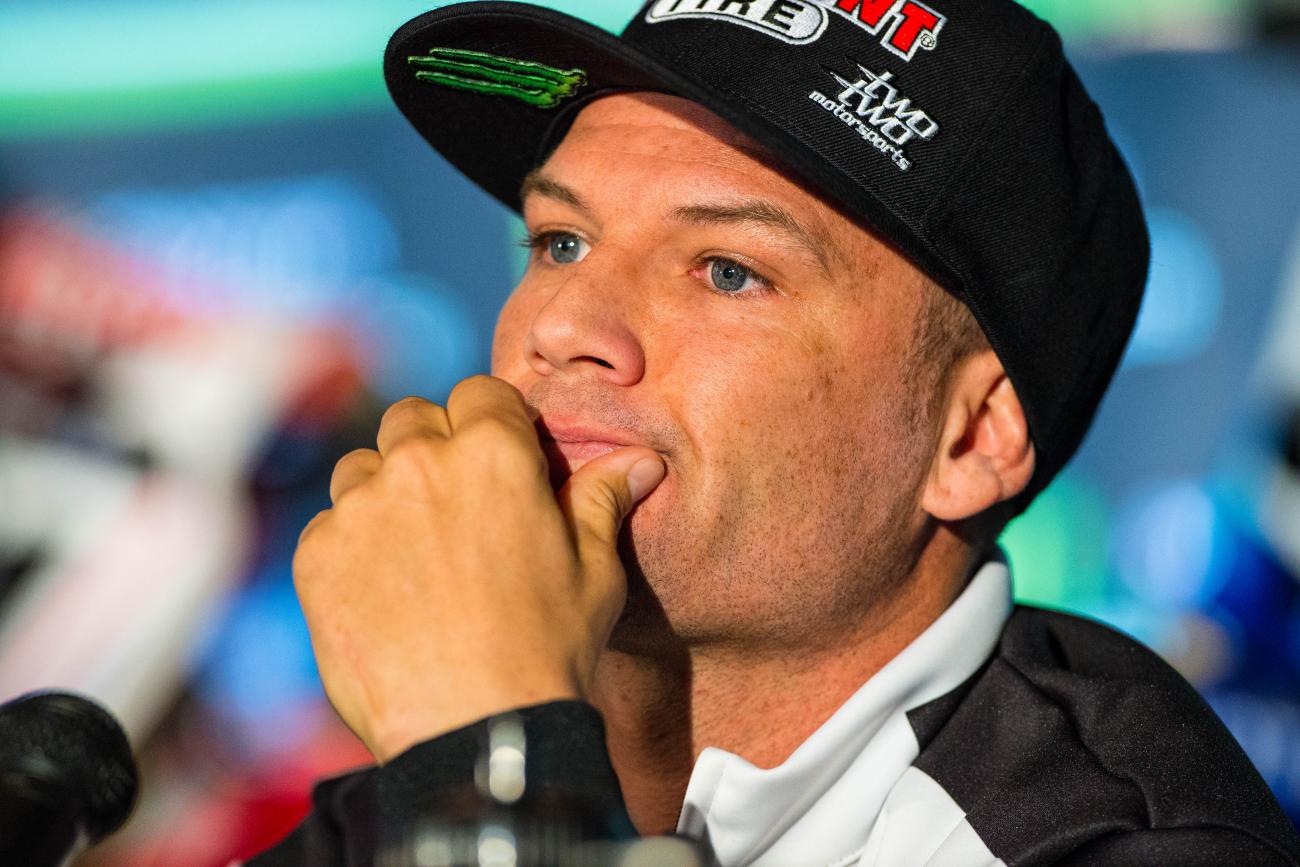 Jason Weigandt: The cold, hard reasons behind Chad Reed shuttering TwoTwo Motorsports are easy to grasp. This is the rare news story that doesn’t result in controversial polarization and drama. Everyone can agree that it takes a lot of time, money, and effort to run a team, and no one can fault Chad for finally saying no mas. This was a monumental effort, an against-all-odds tale that hardly anyone without the last name Reed believed would go this far. As the milestones clicked off—he made the podium! He won a race! He’s got a factory bike! He’s leading the points!—it made believers out of everyone.

Maybe that confused us into thinking it was easy. When previous teams like this failed—Jeff Emig’s Strategic 3 team or Jeremy McGrath’s Bud Light team—it was crushing because it proved the sport couldn’t sustain such efforts. Not a single person in the history of this sport has pulled off what Chad has, which is building and owning a team while also serving as lead rider and winning races over a four-plus season span. Others have tried—none have even come close to that level. This went past looking real and sustainable; it actually was real and sustainable. It was working. But now, all such teams are once again dead. This sport is not the sort that can sustain these efforts for long, and the loss of such teams proves it.

So now we’ll go searching for reasons why, because we all want this to work. More teams, more sponsors, more good rides, and more contenders, these are things we can all cheer for. Without TwoTwo Motorsports there might not have been Chad Reed the racer for the last four-plus seasons, and without it many dramatic, exciting, inspiring, and controversial days and nights at the races. Along those lines, everyone would have loved to have gotten more mileage out of stars like McGrath and Emig, too, and the riders they could and would have hired.

We want this to work.

This is either the biggest small sport or the smallest big sport in the world. I can’t tell. Plus racing, all racing, is expensive. Reed wasn’t draining his bank account running this team—don’t worry—but he also wasn’t maximizing his returns. He did this for love over money, and as cool as it is to stick it to the man, factory teams are willing to lose money to win races. It’s hard to beat a team willing to operate on that business model.

There are others trying. The RCH team is going places. JGR appears here to stay. Progress is being made; the independents are stronger with each attempt. Chad’s team added to that momentum, but he’s entering a different stage in his career and life now. He can find another place to ride and keep his sponsorship money instead of sinking it into the team, which isn’t an option for the owner of any other private team. He can go from spending a bit or making a little to making much more. Plus, he may get to focus a little more on being a racer, but I’m not sure how much that helps. Running TwoTwo might have been a distraction, but he handled it well.

So now we go full circle. When the team started, everyone wondered how in the heck it was going to work. This was swimming upstream. This was going against history. Now that it’s over, those things ring true again. But it sure was fun to watch it while it worked. Maybe the next time a team like this pops up, there will be that little extra momentum, that little extra push, because someone blazed such a deep trail this time.

Jason Thomas: Normally, I opine on our Rapid ReaXtion segments with legitimate neutrality. While I certainly may feel more strongly about some occurrences than others, this one is far different. See, I was there for the genesis of TwoTwo Motorsports. I can remember the long conversations, full of wondering what was next for Chad in that fateful summer of 2010. His career was in a free fall and he didn't seem to have many options left. The factory teams were losing faith in his ability to win, and frankly, he was becoming what this sport considers "old."

In many sports, he would be considered to be at his peak, with a few elite level years remaining. Supercross waits for no man, however, and 28 resonates like 48 in the minds of many factory team managers. In short, this team was conceptualized out of sheer necessity. Many reasons were thrown around and conveniently applied to the formation of TwoTwo Motorsports, but in reality his hand was somewhat forced to action. Factory level teams were closing their doors to Chad, but TwoTwo Motorsports was the open window he needed.

The early days were not the well-oiled machine we’ve seen in recent years. This was a new path for the Reed family, and along with that came a learning curve. There were more than a few sleepless nights spent wondering how they would fund a full race team capable of competing with the big budget factory efforts. Sponsors were signed, team personnel were hired, and the season began. Results improved as the weeks rolled on, and Honda came calling with a few weeks left in the supercross campaign.

He came up a few points short of a third championship but won races along the way, proving that he was still a serious threat after all. Chad was back and everyone knew it. He would go on to win more outdoor races and even lead the points for over half the season. His infamous crash at Millville derailed what may have been a championship run that summer. In any case, he was winning races, winning over sponsors, and proving that this team was for real. TwoTwo Motorsports was becoming a powerhouse in the pits.

As the seasons came and went, TwoTwo grew. Staff members were added. Legendary mechanic Mike Gosselaar joined Lars Lindstrom in an effort to give Chad every edge available. Chassis experts, engine experts, testing coordinators… you name it, TwoTwo had it. Chad's roster of technicians was second to none in both talent and work ethic. It truly became a dream team. The team's edgy persona made it an enviable place to be. There were no corporate restrictions, no red tape to cut through. If Chad and Ellie were on board, ideas were applied and things were improved accordingly. Changes could be made mid-stream, and it made the team very efficient and agreeable. Things were good… Until they weren't.

With a one-rider team, there's always the risk of one crash destroying an entire season. Chad wore so many hats, most importantly of those, the hat that secured everyone's salaries. His results are what brought the dollars to the table. His untimely injures put a strain on both his body and his psyche. The stress of providing for so many and the pressures he bore visibly took a toll over the years. Even in good times, there was always an underlying uneasiness. That's ultimately what led to where we sit today, in my opinion.

For Chad, he's in the tail end of a long and successful career. While I believe he still has winning to do, if he wants to win consistently, he has to narrow his focus. The contenders he's trying to defeat worry only about how to become better racers. They aren't up late working on budgets and approving truck wraps. They're singularly focused on becoming the best racer they can be. This is exactly what Chad must do and he knows it. The stress of the race team is simply too big for a racer. Sure, a high level is achievable, and doing things on your own is a huge coup in the factory-dominated supercross world. To win, though, it's just not the best recipe. If he wants any chance of one last run at a title, this is the only way. He knows that and has finally made the hard decision to lessen his burden.

Many will see this as a sad day for such a revered team. Instead, I will look back on the incredible things that TwoTwo Motorsports accomplished. They set out with nothing but Chad's talent, an under-funded budget, and wide-eyed dreams. Along the way they won races, wore the red plate (and red pants), and had factory backing from both Honda and Kawasaki. They were the envy of the pits. They did things their way and marched to the beat of their own drum. They set out to turn a dream into reality. I was lucky enough to see that dream develop into the juggernaut that TwoTwo Motorsports really became. This team won. They did the impossible. They fought against all odds to stand at the top of the podium more than a few times.

Years from now, I won't look back on TwoTwo Motorsports and remember today's unfortunate ending. I will instead remember all of the incredible feats that the TwoTwo crew accomplished. They dared to dream big and were brave enough to fulfill those dreams. They should be forever proud of what they have accomplished in the past five years. I am proud to say I was there to watch this team in both its brightest and darkest days. I choose to remember them at their best.