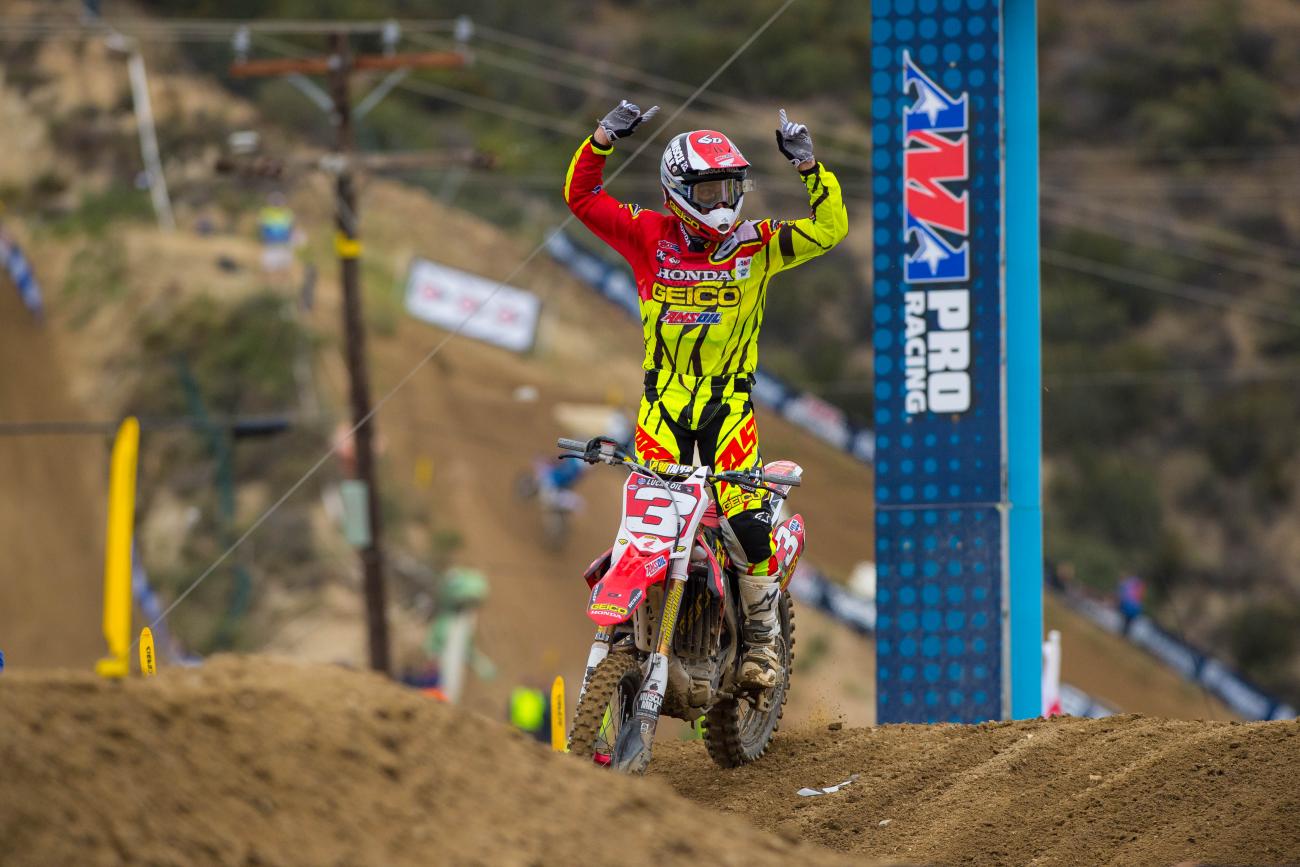 GEICO Honda’s Eli Tomac is just on another level right now, dominating the 450 Class in Lucas Oil Pro Motocross for the second straight week. At the FMF Glen Helen National, Ryan Dungey gave him a little more of a challenge in the first moto, but when Dungey’s bike stalled Tomac sailed past and pulled a massive lead from there. He checked out on everyone again in moto two despite having never raced Glen Helen before for a pro race. Next week? A home-state race in Colorado.

Racer X: We know it’s never easy, but you won big again, and you were just flowing over the track, hopping over the bumps again. How easy was the day was for you?
Eli Tomac: I’m obviously really comfortable right now. I’ve never been in this position before this early in the season to where I feel like I’m just really flowing with the bike. It just seems almost like it’s easy to ride right now. It’s a pretty cool feeling. As far as the motos themselves, the first moto I was somewhere around top five on the start, which is good. I think lately I’ve improved a whole lot on the starts. It’s been good for me. I got into the battle with Ryan [Dungey] there. We were going at it for quite a few laps. A long time. I ate some roost and we were pushing each other. I thought we had some good spots on the track where one of us was faster than the other, then he ended up stalling his bike and I was able to sneak around him there. So he made it a little bit easy for me in that first moto. Then going into the second moto I pretty much ripped the holeshot. I had a really perfect pad [dirt behind the start gate] I was able to see the people around me. I just had fun.

Can you tell us what it was like actually getting out of the gate, and then on that long, long straightaway heading into that Talladega turn? Was it fun or was it a certain sensation usually you don’t get to feel when you’re racing at pro motocross?
This is the first time I’ve raced at Glen Helen professionally. I’ve never ridden the track prepped like this. Normally it’s dry and beat up and edgy compared to what we had today. Talladega was really sweet, just holding on. The traction was amazing. The rain made the track, I think, pretty unreal. There were a lot of cool lines out there, some outsides and some of the little short hills in the back that had embedded rocks that you could kind of jump and almost whip around the corner. There some cool sets of those sections. I thought it was good.

Is everything you’re doing purely for speed, or are there some things that are just fun? Like, let’s see if I can jump to the top of this hill? Let’s see if I can get over these bumps? Is some of it just being creative just to see what you can do as opposed to I know it’s better on the watch?
Yeah, I think some of the little hops, skips, and jumps may not be faster, but it’s saving energy. It’s just about being efficient. A thirty-five-minute moto is pretty gnarly on the tracks that we ride on. Sometimes I think if I was going balls to the wall for one lap, trying to get the best time I could, maybe not, but at times I think it’s better for the thirty-five minutes.

We’re heading to Colorado. Everybody talks about a home state and all that kind of stuff. Are you excited? Is it just another round for you?
Lakewood itself isn’t exactly a home track for me because it’s like seven hours away, but just being in the thin air is always nice. Just having the atmosphere around me and the local fans backing me is always cool. I’ve done well there in the past. It’ll be the first time for me on the 450 there. Looking forward to it.