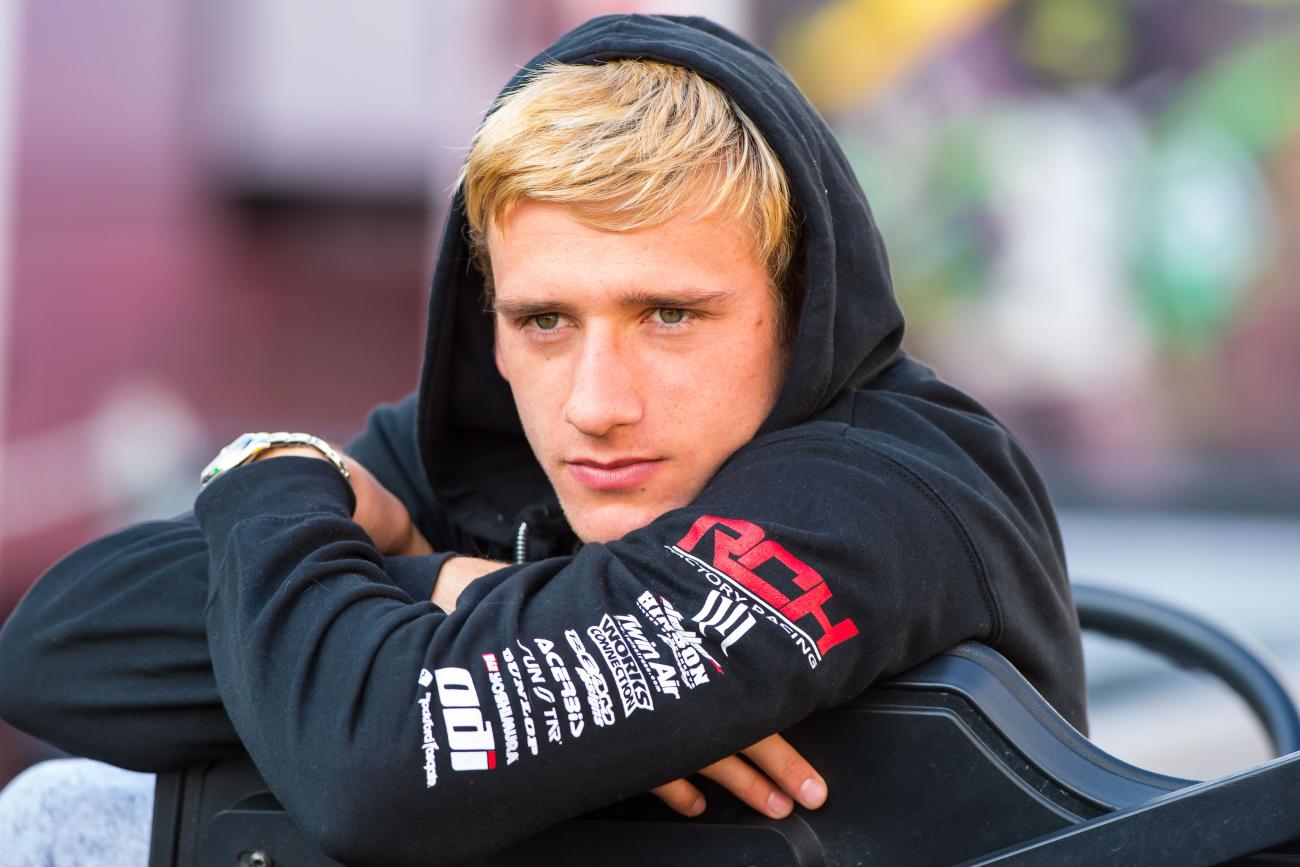 Soaring Eagle/Jimmy John’s RCH Suzuki’s Ken Roczen didn’t start his title defense the way he hoped, with a back injury leaving him off the bike the week before the opener, and then slowing him considerably at the Lucas Oil Pro Motocross opener at Hangtown. Turns out Kenny’s had a stress fracture in his back for awhile now but didn’t even know it, and then the simple act of lifting a box spring (the lightweight part of a bed that goes under a mattress) aggravated it. Then came pain, pain management, and salvaging points.

He’s feeling better now, and talked to us about it today at Glen Helen. By the way, he looked much more like the Ken Roczen of old out on the track today, too.

Racer X: First of all, how are you feeling?
Ken Roczen: I’m feeling a lot better! Pain free while riding now. You can definitely tell [when you miss] nine days of riding, or basically nine days of just lying in bed. You could tell that made a difference last weekend. But it’s definitely going to get better now.

But how is that? Watching you in practice and the first moto last week, it was like, “Man this looks bad.”
It was bad!

So how did you get so much better so quickly?
Well, it was really just that. I kind of went into the first moto cold turkey. I hadn’t ridden during those nine days. I did the practices and I was just rolling around. The first moto the track was super rough and I was super uncomfortable. I hadn’t ridden in a while. The second moto, it was just that I finally had some track time and stuff. Obviously with the back, it was hard to even swing a leg over the bike and stuff. Just the whole week was really crappy.

Were you in super agonizing pain in the first moto?
I was. I could feel it. It was also more like I got super, super tight and tired and cramped. I was just compensating for the back, using muscles I don’t usually use. My shoulders, everything was just aching. I just wanted to get through it. Sometimes, if you want it and you want a championship you have to somehow fight through it. Second moto, I just tried to put it out of my mind and just go.

You didn’t get shot up with some pain meds? Is that something you could do for this injury?
I got injections on Thursday. We had to get all the paperwork handled and make sure it was all good—you have to be careful with that stuff. I had that done, but it’s a long-lasting one. They said it takes four to seven days to really hit and kick in. If the race was two days later, I would have been fine.

So it hadn’t really kicked in at Hangtown?
I tried it on Tuesday and that didn’t work out very great, it actually made things worse. It was just way, way, way too bad at that point. So I went in again on Thursday.

So this week you’re starting to feel more normal?
Yeah, for sure. I haven’t done any full motos yet, but I’m getting back out there and getting a feel for the bike and doing some testing. From here on out it’s going to get better weekend after weekend.

You said last week that it’s not going to get worse the more you ride.
No, it won’t.

So how long were you dealing with this?
The back, they said I’ve had the small crack for years, but it must have then broken off. Just a small piece that can hit the nerve. That started on Sunday. Believe it or not, I moved a twin-sized box spring to a bed. They weigh like five pounds of whatever? I went to lift that and all of a sudden I’m like “Uh, oh! I must have pinched something or something?” I was hoping I just pinched something. So Monday I went down to a physio guy down in San Diego, and I was supposed to go back to him on Tuesday, but he told me I should get an MRI. I went through the whole nine yards—CT Scans, X-rays, MRI—and I got a call from the doctor saying I had a fracture. It was pretty shocking at that point.

Because you never even knew you had a back problem until then.
No! He said it was a stress fracture but all I could hear was the word fracture. I’m like “Dang it.” He said it was not a minor thing.

So, considering that, you’re doing pretty good?
Yeah. At some point, either during an off weekend or when the season is over, I’m going to have to get it burnt. They’ll go in there with a hot needle and push it back together. That could fix it for a lifetime. We’ll see. But right now I’m good, luckily. The good thing is they said it can’t get any worse.

How was the rest of your prep for the season? You still had that ankle injury.
My ankle, I’ve been struggling with it for a long time. It’s still sensitive. This week I went to Pala and I tweaked it again. When my ankle goes all the way down, like even right now if I bend it all the way, I can feel it. But it’s not like it bothers me riding.

So your pre-season testing and training was pretty much going to plan until this back problem.
Yes.