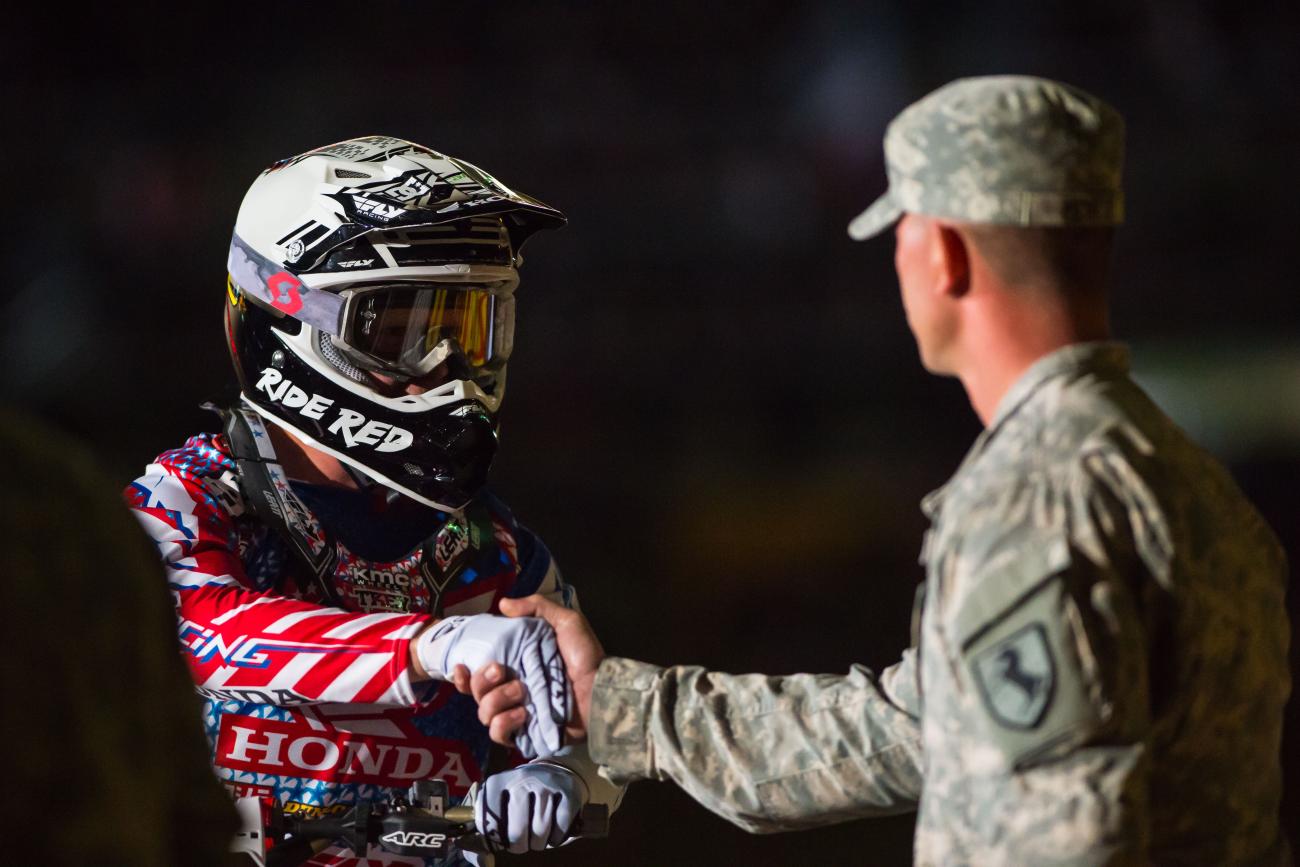 The Word On…isn't here to tell you who won the races in San Diego. (Spoiler alert! It was Billy Robinson and Jeff Matiasevich. Shocked? You need to pay more attention). Seriously,  if you want to read about the race, feel free to go here, here, here, here, here, here, or here. Here, we focus more on the lighter side of moto, the world of action sports, and the world in general. It's generally what you really want to know, in general. The Word On... We call it our bag of party mix: it's random and it's good.

Social media of the week

Fore! @rendawgfmx does what we've all dreamed...shreds the golf course! #happymonday

Too cocky. Thanks @skytiltfilms from the skill with the drone.

Ever say something that may or may not be true on a message board? (Let’s be honest, you more than likely have.) May want to rethink that going forward. According to Mlive.com, a major Western Michigan University supporter is suing three online commenters claiming they defamed her. From Mlive.com:

The lawsuit claims that Bendix, Burgardt and Foster each posted "false and defamatory statements" about Zeigler on the sports website CSNbbs.com while using the online pseudonyms "MajorHoople," "Chipdip2" and "DesertBronco," respectively. Apparently, "Chipdip" had already been taken.

"Defendants' publication of these false and defamatory statements was negligent and/or with reckless disregard of whether or not they were false," the lawsuit says.
The identifications of Bendix, Burgardt and Foster came after "diligent inquiry" that included seeking the defendants' addresses, email addresses, IP addresses and other information from the website, according to the lawsuit.

Be careful next time you decide to post something on the Internet. It could cost you a lawsuit. Read the entire article here.

Dianna Dahlgren, more commonly known as Miss Supercross, is reopening a downtown bar in Spokane, Washington, with her fiancé and a longtime friend. Local news KYLY ran a cool story and video about the new place. From Kxly.com:

She's also planning on adding her own personal touch. Dahlgren splits her time and also serves as Monster Energy's Miss Supercross. You can catch her on Saturday's providing social media coverage during the race. She said it's only fitting to have that component at the bar.

“We'll incorporate it during Saturday's once we're open,” Dahlgren said. “ We'll do 'Supercross Saturdays,' where every time I come on the television for the broadcast, we'll do Supercross shots.”

This is from 2013, but whatever, it’s cool. (Credit to Crush on VitalMX.com). According to Oakley’s YouTube, this crazy bro named Dan Treadway jumped off a 100-foot cliff in the Whistler Backcountry… and lands it. As Matthes would say, “he put his balls on the handlebars.”

In you haven’t followed the case against NASCAR’s Kurt Busch, it’s been pretty crazy. Busch’s girlfriend, Patricia Driscoll, accused Busch of  “putting his hands around her neck and smashed her againt a wall” in September 2014 at Dover International Speedway. During testimony in January, Busch accused Driscoll of being “a CEO of a defense contractor as well as CEO of the Armed Forces Foundation, is a trained assassin." Yes, a trained assassin. Now, according to Jalopnik, “Busch's lawyers alleged that Driscoll committed perjury on the stand, making up stories of how Busch abused her in order to destroy his reputation.” More:

This week, both parties filed their closing arguments. On Wednesday, Busch's lawyers alleged that Driscoll committed perjury on the stand, making up stories of how Busch abused her in order to destroy his reputation. Busch has a bit of a reputation as a hothead already in NASCAR, but a domestic assault allegation certainly tips it over the edge.

Busch's legal team also kept hammering on the assassin story. In his closing argument, Busch's lawyer stated that Driscoll had told "legions of people" that she was a trained killer, but she didn't want to deny it under oath because she knew more people would come forward to confirm it.

Driscoll's lawyers rebutted those closing statements today, stating that she did deny the assassin claim in a cross-examination. Driscoll also called the allegations "ludicrous and without basis" to the Associated Press shortly after Busch and others testified about her flaunting her role with the government. She, uh, sort of did before this procedure began. Assassin? We can't say for sure, but she was pretty cool with being called a "Pocket Commando."

I don’t know much about European football—or as we call it: soccer—nor do I pay much attention to it. But Leander Schaerlaeckens of Vice Sports has an interesting piece on how fans, tired of modern football, have tried to reclaim the game. One group started STAND Against Modern Football—a publication that sold out of its first issue in the summer of 2012. In other parts of Europe, fans have bought stake in their clubs or even started new ones. It’s pretty interesting. From Vice Sports:

Last season, Coventry City moved to a different stadium, in a different town an hour's drive away, when its ownership had a dispute over the venue's rent. But that isn't nearly as egregious as what happened to Wimbledon F.C. Founded in 1889 and nicknamed The Dons, the club had always played in the eponymous neighborhood of London. But in 2003, after ownership balked at desperately needed renovations for its old stadium and failed to find a site for a new venue in its area, the club moved to Milton Keynes, a soulless new city developed 56 miles away, and was renamed the Milton Keynes Dons. Moving a club is totally unheard of in Europe. And rather than go along with it, the Wimbledon fans simply founded A.F.C. Wimbledon and started over. Today, having rebuilt their beloved club from the ground up, Wimbledon plays in the fourth tier of English professional soccer, just one level below the Dons.

It goes on: Malcolm Glazer and his sons, who are American mall moguls and owners of the Tampa Bay Buccaneers, bought Manchester United F.C. by leveraging the club against the debts they had incurred to buy it in 2005. By taking on more than a billion dollars in liabilities, they have drained hundreds of millions from the club to service that debt. Some fans found this so unpalatable that they founded F.C. United of Manchester, which is now a semi-pro team.

A more common reaction by fans to ownerships they consider too intrusive is to buy a stake in their club. This works well in Spain, where Barcelona and Real Madrid are wholly owned by their season ticket-holders, who elect a club president. In Germany, by law, the fans must own 50 percent plus one share of their teams. Unsurprisingly, season tickets are affordable and relationships between club and fan are generally good there.

As we announced here last week, we’ve teamed with Hookit—“A company that supports and connects athletes, brands and sports through the 'Internet,' aka your computer, phone, apps and sites you use everyday.”—to try and help riders, the industry, and fans understand more about social media. (Last week, we compared social media stats from January 2014 and January 2015, which you can check out here.) We probably aren’t telling you anything new when we say Ken Roczen, Chad Reed, Ryan Dungey, James Stewart and Ryan Villopoto are some of the most popular moto athletes in the world of social media. But who is growing their social media accounts most in 2015? Thanks to numbers complied by Hookit, we’ll look at which riders grew the most during the month of January.

- Tyler Bowers’ social media growth was just over 76 percent during the month of January. Hmm, did something happen last month that drew some attention to Bowers?

- Cole Martinez has been making waves this year in 250SX, and it shows in his social media stats. He had a 37.8 increase last month.

-  Think a podium performance helps you grow? It does, just ask Alex Martin, who got his first career 250SX podium in January and has grown 19.5 percent.

Check out the entire top ten below.

Jackson Goldstone is 10. Jackson Goldstone also apparently has guts of steel. I can recall jumping a five-foot gap at that age and being pretty stoked. Nah. That’s not cool enough for Jackson, who recently tackled the mega ramp at Woodward. This kid has cojones.

Okay, so this happened last week, but I had to share it. According to Mashable, Sorin Radu, a snowboarder and mountain rescue volunteer, got caught in an avalanche last week while snowboarding in Romania. “But that’s not all that crazy. Avalanches happen all the time.” And you would be correct. But, wait for it, this dude FILMED THE ENTIRE THING. It’s insane.

I got an IM early Monday morning from Racer X editor-at-large Aaron Hansel. He wanted to know if we a subject for Unsung Hero picked. We didn’t. He began to tell me about privateer Landen Powell and how he was helping the men and women who serve our country this year. I’ve talked with Landen a few times over the years, and always thought he was a nice kid, etc. But what he’s doing with the Sportsmen for Warriors goes beyond all that. It’s one of the better stories you’ll read all year. Check it out here.