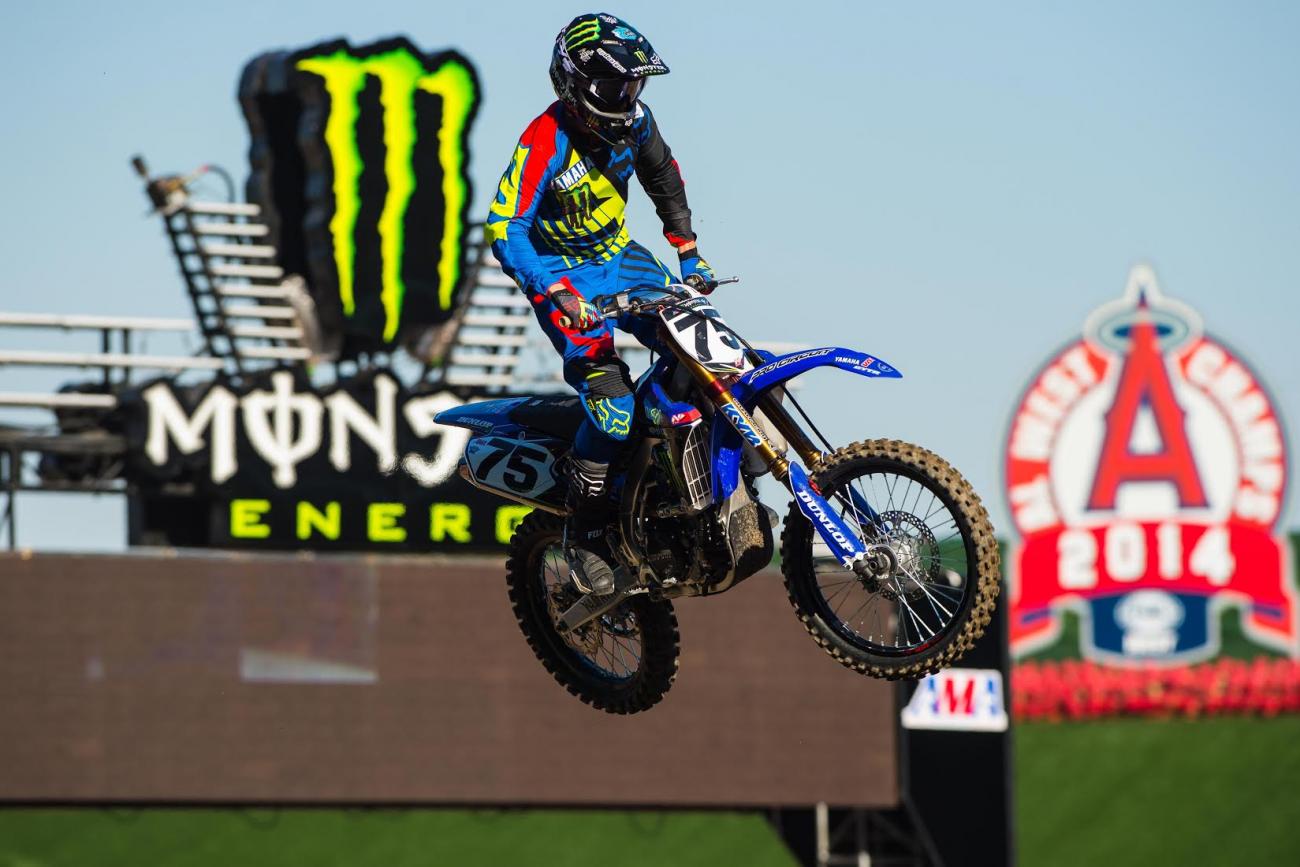 “This bike just looks cool,” said Josh Hill while taking a long look at his new Yamaha YZ450F which was done up in a smart blue, black and green color scheme and affixed with Valli Construction and Monster Energy logos. Hill was proud of his new bike as well as his new sponsors as the whole. Hot off a successful seven-race world tour which saw the journeyman racer line-up and race in such places as South Africa, France, Italy and Switzerland, Hill returned home to California with no defined plans for 2015 as virtually every major race team was already way down the tracks as far as testing and preparing for the rapidly approaching Monster Energy Supercross Championship.

Enter longtime team manager Larry Brooks and team owner Chad Lanza. Realizing they had a former race-winning rider at their behest with Hill, Brooks and Lanza put calls into Keith McCarty at Yamaha who was immediately interested in the concept and the group went to work in stringing a deal together. For all intents and purposes everything fell into place and the team was set to hit the road for 2015. Which brings us all the way back to the pit area at Angel Stadium where Josh Hill and veteran mechanic Jonathan Lower have just finished up press day practice for Saturday night’s season opener

Racer X: Josh, the last time I saw you was out at Glamis and you were launching off huge sand dunes. That was only a couple of weeks ago and now here you are in a motorhome outside of Angle Stadium preparing for the opening round of the 2015 supercross series. Just what do you have going on here with this team?
Josh Hill: Well, Mitch Payton was supporting me through the off-season and Monster Energy/Pro Circuit/Kawasaki and gave me some bikes to race the Monster Cup. Him and Bones built me suspension and kind of built me a program so I could race competitively in the off-season. It was never like “Oh, this is a for sure deal for supercross in 2015” or anything like that. It was just him helping me out through the off-season. I had hoped that maybe I would impress him enough to get on the team with him, but the 450s just weren’t his focus. He’s focused on winning a 250F championship. I didn’t really have too many people contacting me and trying to put me on a team, so I ended up contacting Larry Brooks and getting his advice and his help and just seeing what he was up to. He also contacted Chad Lanza and he got a little bit excited and said that he could give us a rig and he could help out with some expenses. He also said he could call Keith McCarty at Yamaha and see what we could do there. It was just a piece-by-piece deal. We put this together from the ground up and luckily Keith McCarty and Mike Guerra and Jim Perry wanted to help me out. That means that the world. That meant we had good equipment; we had spare parts. Ross Maeda at Enzo is building all the suspension and doing all the testing with us and I could not be more pleased with that. He’s one of the best technicians I’ve ever worked with. In two weeks we’ve got this bike ready to where I feel it’s ready to be competitive. The bike is good.

Keith and Mike and Jimmy, you have a long history with those guys. You’re very first supercross race, here at Anaheim back in 2007, was on a Yamaha.
I rode for Yamaha and Mike Guerra from the time I was 10 years old to the time I was 21 years old. They signed me to factory Yamaha straight out of the amateur ranks and then I rode for San Manuel when Yamaha decided not to go racing as a factory team anymore. I rode for them until my career went a little bit off-track with the backflip crash (Note: Hill suffered major injuries when he attempted a backflip on July 22, 2010). When Chad Lanza contacted them they kind of sat down and let me know what they could do for me. They said, “We’re doing everything we can for you to get you out there.” I can’t be more gracious to them. Just the fact that they would be willing to work with me again meant a lot. They still had some faith in me and the rider that I am. That was a huge step forward for us. I don’t think we’d be in this situation had Yamaha not stepped up like that.

How good is your equipment? How good is your bike? Is it good enough that you’re going to be as competitive as you want to be?
This is going to sound like a sales pitch, but my bike is pretty stock. It’s the fastest bike on the market, hands down. As far as speed goes, it’s the fastest bike I’ve ridden. I’ve never ridden a KTM, but of all the other bikes I’ve ridden out of the crate, you have to be a good rider to ride the bike. It’s that fast, stock. So when you take the engine out of the equation all you have to work on is the chassis. We basically spent the last two weeks just working on the chassis because I got on the bike, changed the gearing a little bit, threw a Pro Circuit pipe on it and was like, “Oh, okay, this thing is as fast as anything that I’ve been riding—or faster.” All we had to do was work on the chassis. I feel at this point working on anything with the engine would be overkill for supercross. The thing is fast and runs clean. We’re just ready to get out there and wait for this gate to drop.

You rode the factory practice today and looked great out there. Did you get a read or feel on things during that short 15-minute session?
I feel great on the bike. For only having limited time on the thing, I think that was probably the most comfortable I’ve ever felt during the first laps at Anaheim. I’m happy with the motorcycle and I think the rest of the set-up is really good, too. We’ve got Fox gear and Spy goggles and N Style and Monster Energy is backing me. The played a real crucial role in getting this deal going. When you put all that stuff together, the whole program looks more factory than some of the factory set-ups.

Despite some untimely injuries you suffered last supercross season, you really came on strong at the end, didn’t you?
The end of the series was great. I won a bunch of semis, I won a heat race, got a podium. In the last five or six races I was top five in times every weekend and I was the first guy and sometimes the only guy to be hitting some of the big quads and some of the jumps on the track. Last year was really the first year my confidence came back. My health came back to me and I felt like my old self. I felt like I could ride the bike and do some things that other people couldn’t.

To run that well at the end of 2014, we’re you surprised that more teams didn’t try to pull you into their programs for 2015?
Yeah, I was a bit frustrated that no one was calling me and trying to get me on any of the programs. It kind of caught me off-guard. At one point I got a call from RCH while I was up racing up in Canada saying they wanted me back, so I kind of thought, “Oh, okay, well I just come back over there again.” I was content with that because I think there are few people over at RCH who are extremely smart and can do some awesome things. I think Mark Johnson is one of the best people I’ve ever worked with. There are some people over there that make that team really good. So when that didn’t come together, then it left me kind of scratching my head again. I went down a couple directions, but nothing was really materializing into what I wanted it to be so we just said we’ll do it on our own. With Monster’s backing and Yamaha’s backing and Pro Circuit and Enzo, it’s like I couldn’t ask for a better situation. Now we just need to get out there and get results and make this worthwhile for everybody involved.

While you were riding practice I thought to myself, Hill might have a little bit of advantage over some of these guys because he never stopped racing in 2014. Thoughts?
Yeah, I did 33 races in 2014. I was thinking about it and I don’t know if anybody else has done more than that. I went and did seven off-season supercross races and I did well at a lot of them. I think I was only off the podium at Monster Cup and Bercy as I didn’t have a very good race. Man, it was a good off-season. I think I have a lot less pre-race jitters and I don’t think I’ve got the butterflies in my gut like you normally do when you come into Anaheim 1.

What do you think you can do, what do you hope to do, what will make you happy?
That’s three totally different questions.

You know what I mean.
No, I think I’m as capable as anyone out there. I think we have to go out there and learn and make sure we have everything together with the motorcycle. We’ve done some practicing on it, but being in a race situation, it’s new bike and we have to kind of learn that. What’s going to make me happy? I would happy if I left here on the podium. Anything else than that, it would be like, “Okay, I think that’s where we should be.” I’d be happy if I ended up on the podium, I’d be happy if I won a heat race. You know, I just want to come out of here with some momentum going. That’s all that I’m worried about.