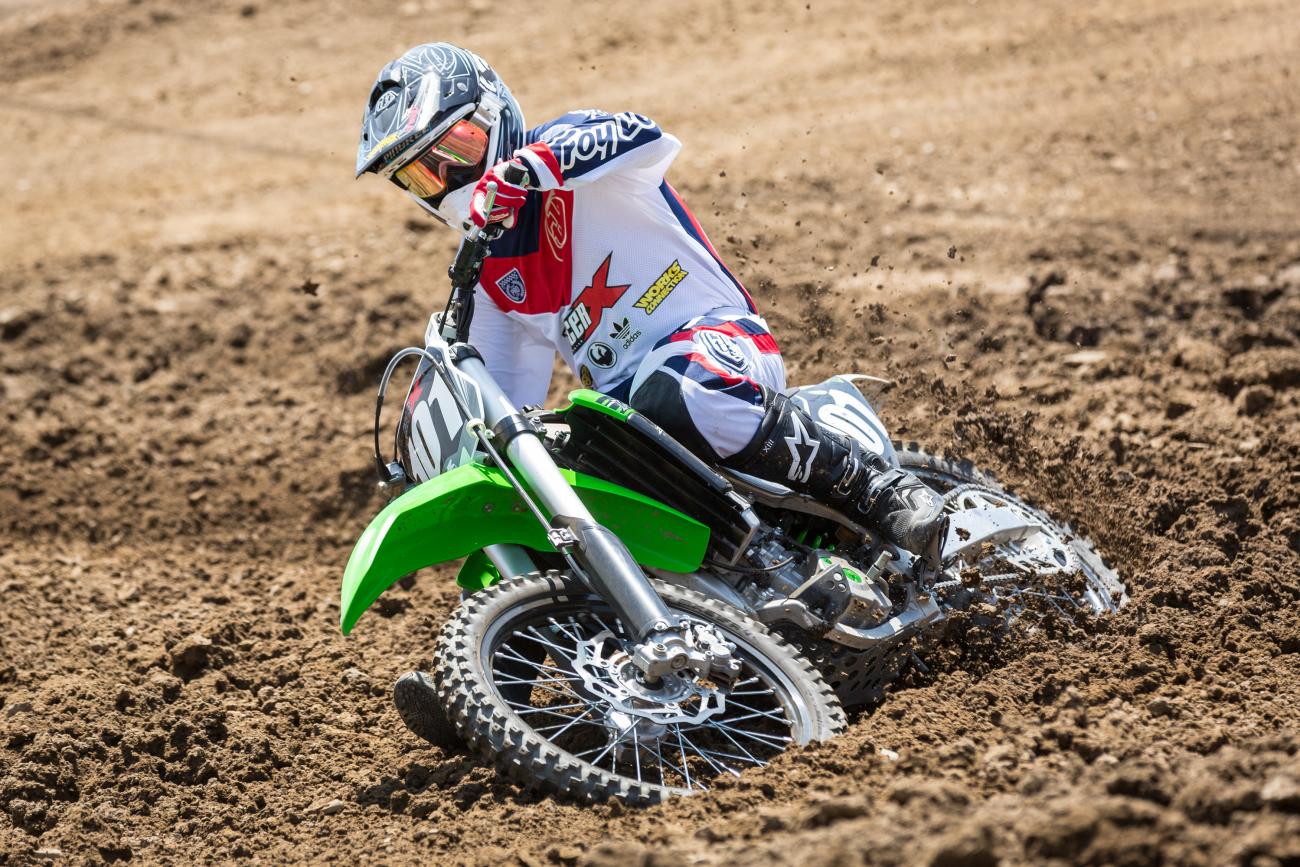 I have been watching some of the videos you can find using the active links in the 40 years of Supercross column, I find it amazing how the sport has changed let’s say between 1986 and 1990. I’m not sure exactly when, but it seems that somewhere in between the penny dropped for riders and track builders alike. The tracks in 1990 seem much more fluent and the riders seem to string the tracks together much more fluently, rather than the early 80s obstacle by obstacle approach. It appears as if riders like Bradshaw and Bayle (examples) were able to string entire sections of the track together now and create a new way of riding Supercross.

Here it goes: In my opinion racing was so much more fun to watch, the outcome did not seem so clear cut, the riders seemed to be much longer and more closely engaged in battle before one passed the other. It also appeared as if sometimes riders who were passed could come back at their adversary and take him back successfully, contingent on their current testosterone level, or level of aggravation.

Is it that today the outcome of a race is much more depending on the off the track preparations like fitness and bike testing/setup?

It appears as if apart from riders crashing out of promising positions, the favorites set more or less the fastest practice times to repeat the same spiel at night when the gate drops. If the fans are lucky, the prospects get a bad start and have to battle before they rise to the top and check out.

I believe there is more to the nowadays downsides of the Supercross series besides bigger bikes, and Autobahn like tracks. Where are the flamboyant interviews and comments to get into the other riders heads and psych them out, where are those testosterone charged brake out rides that give you the first ever win at the possible cost of your life? It seems like many riders don’t dare to mess with a “faster” guy because it is not sportsmen like. Last time I checked, the winner is the one who crosses the line first, he does not have to be the fastest man on the track at all times.

Like pearls on a string it seems we are watching the racers go around the track at times, everybody seems to know where they belong in the line and be content with it to a degree.

Take it away Ping!

There was definitely a progression in track building back in the late 1980s and early 1990s. I remember the first supercross race I attended in person was in Phoenix at Sun Devil Stadium in 1997 or 1998, and the track actually had a flat, semi-truck trailer covered in dirt as one of the jump faces. They were also running some kind of cars or buggies at intermission. The whole thing was pretty ridiculous, looking back on it. Still, the battle between RJ and Wardy was all I cared about, and those two didn’t disappoint. Maybe it was the addition of the Dirt Wurks crew, or maybe it was rider feedback, or just a normal progression as riders were able to go faster and jump farther—I don’t know. But I do have a very clear opinion on why racing was better back then, and it all has to do with valves and cams. Those old enough to remember racing professionally on two-strokes will concur that the sport was much more technical back then. I’m not giving you my candy-coated version of what the past was like. This isn’t an opinion; it is fact. Two-strokes require much more throttle control and precision with shifting as well as momentum through turns and over obstacles. Mistakes back then cost riders huge amounts of time, and mistakes were much more frequent. That meant that riders were able to gain and lose ground more quickly, making the race more fun to watch. On a four-stroke, mistakes are covered by an endless amount of horsepower and torque, so even a bad line, slow turn, or a crap-box of a rider with just a hint of talent can blow a turn or screw something up and recover with a twist of the wrist. Before you get all bent out of shape and accuse me of saying the sport has gone soft, understand that I know that’s not the case. New bikes are just so good that they make it easier to go fast and make fewer mistakes. That doesn’t breed good racing. Hang on to those old videos from the 1990s. They might be some of the best racing the sport will ever see.

I want to hear your opinion of the Stewart suspension.  Is it fair, too extreme, or somewhere in the middle?  Or is it just as simple as this is a new drug testing policy, and they were gonna come down hard on the first offender no matter who it was? What better way to show that the FIM and/or AMA mean business by parking one of the sports most popular rider for a year for something widely viewed as something that shouldn’t be an issue to begin with.  If any of the riders had any question marks as to if it’d be worth trying to cheat to gain an upper hand and just get a slap on the wrist, they know now that that just won’t happen.

First I want to say that nobody should be above the rules. I don’t care if it’s Adam Enticknap or James Stewart you have to abide by the regulations set in front of you, and there should be repercussions if you fail to do so. James had multiple opportunities to deal with this before it became an issue, and now it’s a problem. Does the punishment fit the crime? WADA has a history of handing down severe penalties to athletes caught cheating. James looks very guilty because he had multiple chances to disclose his use of Adderall and he never did. That particular drug is something they look for specifically because it does have performance enhancing properties. All that said, I don’t like the ruling. It hurts everyone and does nothing but set a monumental precedent moving forward. The series loses money because one of their stars is missing, supercross and motocross get a black eye for having an athlete in another scandal, and James loses a year in the twilight of his career. I wish they would have fined him a truckload of money and donated it to the Asterisk Medical Unit or Road 2 Recovery, or used it to fund spinal cord injury research. Fine him $100,000 and tell him he either pays it or sits out an entire season and I’m sure he’d nimbly bound to his checkbook like a finely tuned athlete on a regular prescription dose of Adderall. That way other riders would still be discouraged from cheating, James gets to race and the fans get to see one of their favorites. Sadly, I don’t make the decisions and we’ll never know how 2015 would have played out for Stewart. Lesson learned the hard way, I guess.

Hey ping, I recently ordered a new ktm 450 factory edition. I know you test riders always say not to buy a bike without trying it but I live in Canada and there is only a 10 day window to get one.  I was wondering how long until you get a ride on the bike. Also, what is your opinion of KTM running that factory edition program.

My other question is: Do the husky guys get to ride something similar? If I was Jason Anderson I'd feel like I was getting KTM's hand-me-downs.

I should be able to get on one in the next few weeks, according to the guys at KTM. They have a handful of media bikes coming, and I plan on getting in that line early. I’m very curious to see what the 450 feels like ten pounds lighter and with three more horsepower than last year’s model. If you had the cash I don’t blame you for throwing it down on one of those things. They look amazing, and I doubt you will be disappointed. KTM isn’t breaking any rules, so you can’t get mad at them. To me it shows their dedication to racing and their riders. The size of the company allows them to move more quickly than one of the big four Japanese brands.

I asked the Husqvarna guys the same thing you are asking me: Will they get to use that frame and the new engine this season? The answer is no. It is a separate brand, and even though they are both owned by KTM, the homologation rule only applies to the brand you bring in. That means Jason Anderson and all the Husky guys will be running what the factory KTM riders used last year, more or less. The guys at Husky seemed very happy with their stuff and are ready to go racing. It will be interesting to see how each team fares though.