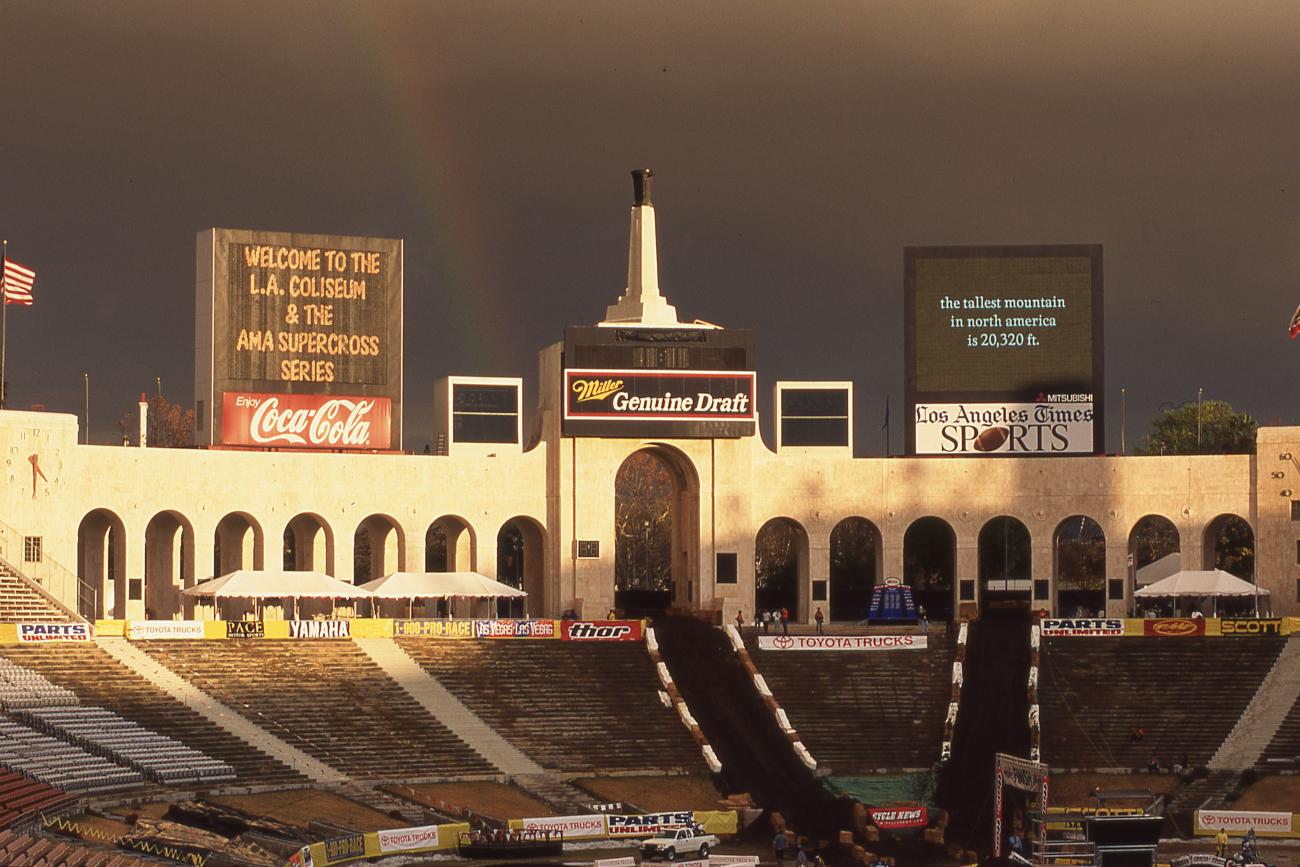 After the 1997 season threw the supercross world upside down with the Jeremy McGrath dethroning, the world prepared for a wide-open affair for 1998. Jeff Emig stayed with factory Kawasaki to defend his new #1 plate, but much else was different. McGrath bailed on his failed Suzuki experiment and picked up a Yamaha ride—one unlike any we had seen before. He formed a private team with backing from mail order giant Chaparral. Team Yamaha would wheel a works YZ250 under the tent for him to race. It was the forerunner of today’s satellite teams. Yamaha hadn’t won the SX title since the Monoshock glory days, and this type of team had never been done before. Plus, McGrath’s dominance had been overcome the previous year. No one knew quite what to expect.

Honda was surely livid about seeing its eight-year AMA Supercross title streak come to an end and they signed Ezra Lusk to get the title back. Mike LaRocco was also on a Honda now, but this one was basically a privateer deal with help from Factory Connection. Many doubted LaRocco’s team, too. (Today, that team has grown into the mighty GEICO Honda squad.) Yamaha had Doug Henry back on a four-stroke—this one the production YZ400F as opposed to the full-works bike he won on in Las Vegas. Kevin Windham was getting play as a rookie 250 rider with Team Yamaha, too.

But even with the huge list of contenders for the opening-round win, a rider no one expected to win came out on top. On a muddy night at the LA Coliseum, Henry, Emig, and McGrath held the top spots for most of the night. But then a Kawasaki rider started storming forward. He was so unheralded that the TV crew actually thought he was a lapped rider at first, but it turned out he had just gotten a bad start and eventually worked his way into the lead. On the last lap Henry stalled his thumper, and the world quickly learned how hard it was to restart a hot four-stroke. The Kawi rider went by and won the race. ESPN actually had to re-announce once they realized what had happened! Check out the race here.

The rider? French 250 GP rider Sebastien Tortelli. Seb was very fast outdoors but new to supercross, and was only riding a few early US races to gain experience before going back to Europe. He used his mud-riding prowess to pass the best riders in the world and win the race. It was an even bigger shocker than Greg Albertyn’s victory at last year’s opener. Emig and McGrath were second and third. Check this out to see the final minutes of the main and Tortelli’s charge.

Lusk had a terrible night in the mud. His team tried fitting special fender covers over the bike that would prevent mud from sticking, and they were late to the starting gate. He got a bad start and finished sixteenth. The next weekend he’d extract immediate revenge by dominating in Houston. On the dry tracks, Tortelli came back down to earth—he finished eighth. A few weeks later he would head back home to prepare for the Grand Prix season, where he would steal the 250 Grand Prix Championship away from Stefan Everts.

McGrath led early at round three in Tempe, checking out like old-school MC. But Lusk was determined down the stretch, catching the four-time champion and sticking an aggressive pass on him in the final stages. It was a statement win and had to feel especially good to the Honda brass. “This win does a lot for my confidence,” said Lusk to Cycle News. “But I hope we don’t have anymore races like this—it was a lot of work.”

Where was Emig? The champ looked okay going 2-3-4 at the first three rounds. Then came Seattle. We’re still not sure what happened. The defending champion got a good start in the main and then started inexplicably falling through the field. He would finish a lowly fourteenth, not injured, just riding badly. This kicked off a sudden and unexpected downward trend for Emig. “My head and my bike aren’t working together,” said Emig after Seattle. “I’m as strong as I’ve ever been, but my mind isn’t working right and consequently, I’m not riding the bike right. I haven’t been clicking all year.”

As Emig was headed down, things were looking up for McGrath. He won Seattle to notch his first-ever SX victory on a Yamaha. Lusk came from way back to finish second, ahead of Henry. “I found myself on the ground after colliding with a Kawasaki with a number-one plate on it,” said Lusk.

McGrath left Seattle with the points lead and was starting to heat up—he notched wins in San Diego, Indy, and Atlanta to make a four-race streak. Emig was floundering with 14-8-7-13 finishes, and Lusk crashed in Indy and suffered a small break in his hand. Just like that, the King had a giant points lead of over 50 points. His closest competitors were actually fellow Yamaha riders Jimmy Button and Kevin Windham. The trio swept the Atlanta podium and held the top three spots in points. Yamaha rules!

On a muddy night in Tampa, Larry Ward won on his factory Suzuki. It was Ward’s second career win, and the first one came eight years earlier (that’s the all-time record between first and second wins). McGrath won Daytona while Emig finally got back going with second. A few weeks later Emig would crash and miss some races with injury. It was a disappointing title defense.

Supercross visited New Orleans next, and Windham, the hometown favorite, took advantage and got his first win of the year. He held on strongly despite heavy pressure from McGrath. “For a while there, I was getting all nervous being the hometown boy, but I settled down and used it to my advantage,” said Windham. “This is, by far, the best win of my career.”

Windham, in his first full 250 season, was learning quickly. He won again in St. Louis. “I can’t even describe how I feel right now. I’m on top of the world,” said Emig. “It feels so great that everything is falling into place. I’m having so much fun on the bike—just having a blast.”

Meanwhile, a desperate Lusk slammed McGrath in a late battle for second and knocked the four-time champion down. The fans rained boos down on Lusk. “I know I’ll never be a Jeremy McGrath, and I hate to get booed like this, but once in awhile somebody’s got to do that to somebody,” said Lusk. “It was just aggressive racing.”

McGrath was bumped back to fourth behind LaRocco. At the next race in Pontiac, McGrath suffered an early crash and broke the handlebar mounts on his Yamaha. It marked the first Did Not Finish score of his 250 Supercross career. He also tweaked his wrist there. A few months later, it was determined he had broken the wrist, which ended his run during the summer’s AMA 250 Nationals. That effectively began the supercross-only part of his career. Click here to watch the main event.

But this 1998 250 SX Series wasn’t over. Lusk and Windham went 1-2 in Pontiac to make up points. Then came a crazy Charlotte race. McGrath went down early and finished fourteenth. Windham appeared to be heading for victory and making up more points—until he crashed out. Then LaRocco went down while leading. This opened the door for John Dowd, a 125 West Region rider, to take his first career 250SX win. Dowd was 32 years old, making him the oldest 250 Main Event winner ever. “I guess I can be as proud of this as someone being the youngest winner ever,” said Dowd.

Lusk was now riding with a separated shoulder but still wouldn’t give up, somehow gutting out second. Two races remained, but McGrath was still in position to wrap the title early with a solid finish in Dallas. Lusk, sore shoulder and all, won it, but McGrath’s runner-up finish was enough to lock up the championship.

“There were a lot of people who didn’t think I could do it again,” said McGrath to Cycle News. “They thought Jeremy McGrath was washed up, and this is for all the people who said that. I want everyone who thought I was washed up, thought I was old, thought that I couldn’t do it to eat crow, because I knew I had it in me. I just had to get the right combination, and the puzzle was put together, and we did it. It’s sweet revenge, for sure.”

At the Las Vegas finale, McGrath ended the year with a win. After a one-year hiatus, the King was ruler again. His second reign would last quite a while.

We told you yesterday about how hot-shot Pro Circuit Kawasaki rookie Ricky Carmichael won a lot of races but crashed his way out of the 1997 125 East Supercross title. Well, in 1998 he made sure that those same mistakes weren’t made. He swept the 125 East series, going a perfect eight for eight for 200 points and walked to the title ahead of Primal Impulse Suzuki’s Robbie Reynard. FMF Honda’s Broc Sellards finished third, but RC’s sweep established himself as a future mega-star.

There was a closer battle in the 125 West Region Series. Factory Yamaha’s John Dowd, a somewhat controversial choice to ride the 125 West series because he was a full-time 250 guy in previous years, went up against the Frenchman David Vuillemin. Vuillemin won a race the previous year while learning the supercross ropes, and this year he was back for the entire West Region series before heading back to contest the GPs. With FMF helping him out and out of a box van, the Cobra was very fast.

Old man Dowd won the first two rounds while Vuillemin ripped off the next three in a row. The two Yamaha riders were neck and neck for the title going into Dallas, but Dowd snagged the win to emerge as the champion, while Vuillemin collided with Shaun Perolio in the air and would end up fifth. Dowd’s win got him a promotion to the 250 class full-time, and Vuillemin would also be in America full-time within two years.

The Las Vegas round hosted the East/West shootout, and Dowd and Carmichael went at it the whole way, with Carmichael just holding Dowd at bay. “This was the toughest supercross race of my life,” said Carmichael. “Man, that guy’s in shape.”

October saw the launch of the U.S. Open race at the MGM Grand in Las Vegas. Designed to bring the glamour (and big money) of the off-season European SX races to the US, the event, invented by Eric Peronnard, was an instant hit. McGrath was the favorite but suffered from bad starts, and Damon Huffman landed the win and $100,000 bounty. The U.S. Open would become a main stay for a decade before eventually morphing into today's Monster Energy Cup.