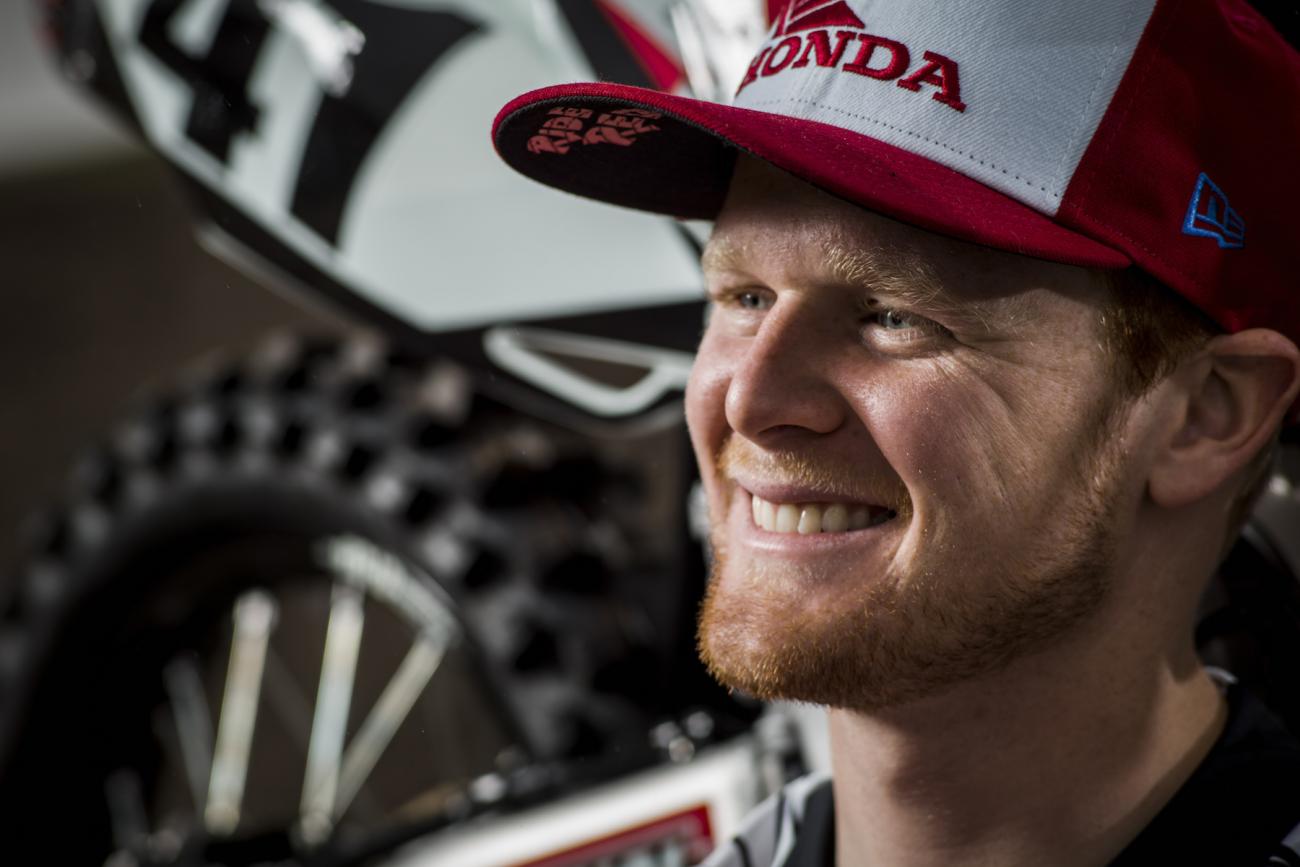 Come January 3, 2015, at the 2015 Monster Energy Supercross season opener, Trey Canard will find himself on the bubble. Actually, let’s just make the starting line, and remove the mention of a significant career breakthrough happening, as that is just the way Trey Canard sees things—business as usual. And while Canard might not want to fully admit to the significance of the situation, he is well on the way—literally riding at the top of his career—to a major career breakthrough in the 450SX Class.

For 2015, Canard plans to arrive in Anaheim better and stronger than where he left off at the end of 2014—and that was with several very convincing wins, including a 1-1 sweep at the season-ending national. We spoke briefly with Canard at Honda’s team press intro about how he is handling his time during the off-season and what it is going to take to continue with his momentum.

Racer X: Trey, you were really on a roll at the end of the [outdoor] season, starting at Unadilla. By the end of the summer, it was clear that you were perhaps the strongest guy on the track, and you seemed to find momentum with each passing week. And then, your performance at the Monster Cup clearly showed your outdoor results were no fluke. Borrowing what is perhaps one of the most overused sayings in professional motocross, but you clearly proved that you were ready to “take it to the next level.”
Trey Canard: I think really we have had some good things happening around Honda and our entire program. The bike is the best it has ever been, and clearly the momentum is going our way. You know, you can have all sorts of doubts if you can do it [win], but when you finally do win, it’s the most amazing feeling. Getting that first one at Unadilla was a huge deal for me—and our entire program. It was a very big breakthrough, and to know I could win a moto was a good thing. And even though we didn’t get the overall win, just getting that single win was a huge step and exactly what I needed.

What are you doing during the off-season in order to close those last few millimeters of preparation between you and the other top guys?
I’ve just tried to do the work I need to do. You really can’t reinvent the wheel just because things are going well. I’ll come into Anaheim as the best prepared as I can be and will let the cards fall where they will. And lord willing, I’ll know that I’ve done my best as far as preparation, which is just as good if not better than the others.

Tell me about your off-season program—some guys base their off-season deals in California, while others are in Georgia and Florida. I know you’re working closely with Tim Ferry. Have you moved from Oklahoma to be closer to Timmy?
No. I have been in Oklahoma the entire fall but have taken a few minor trips to California, primarily for testing. You know, nowhere beats home for me. The weather isn’t always ideal, but it’s an important part of my program to be home and for my family as well. This year, I will go to Florida after Thanksgiving and stay with Timmy in order to really get things in focus for my training.

So you will stay with Timmy for all of December and until Anaheim?
Yes, pretty much. The only thing I have coming up is a trip home to Oklahoma on December 12. My wife Hannah is graduating from the University of Central Oklahoma, and I’m coming back for that. But then it’s right back to work, as the circus starts soon after that.

That is cool. I didn’t know your wife was going to school. What degree is she going to earn?
It is called a Family Life Education. It is a pretty broad degree and allows her to continue on with her education. If she wants, she can earn a psychology master’s [degree] and work in areas like counseling, drug and alcohol rehab, and other specialized social areas. But right now she works at a homeless shelter, and she really enjoys helping others.

When you are in Florida, where will you base yourself? I recall back in the day Timmy had his own facility at his house, but does he still ride there?
I will be staying at Timmy’s place, but he doesn’t have that supercross track anymore. Mike Grondahl bought Ryan Villopoto’s old training facility, and Timmy has worked out a deal with him so that we can train over there. Timmy and Mike are connected on that front, and we have a deal for the month of December. It looks like right now it will be Mike’s son, Eric, RJ Hampshire, and myself all working together and training. At least that’s for now, I’m pretty sure a few more might show up, but that’s the plan for now.

Well Trey, good luck with things and I hope things keep rolling the direction they have been. You’re really poised to have a breakout year.
Thanks. I try to not overthink it, so I try to put in the best work I can and the best work I’ve been advised to do, and leave it at that.