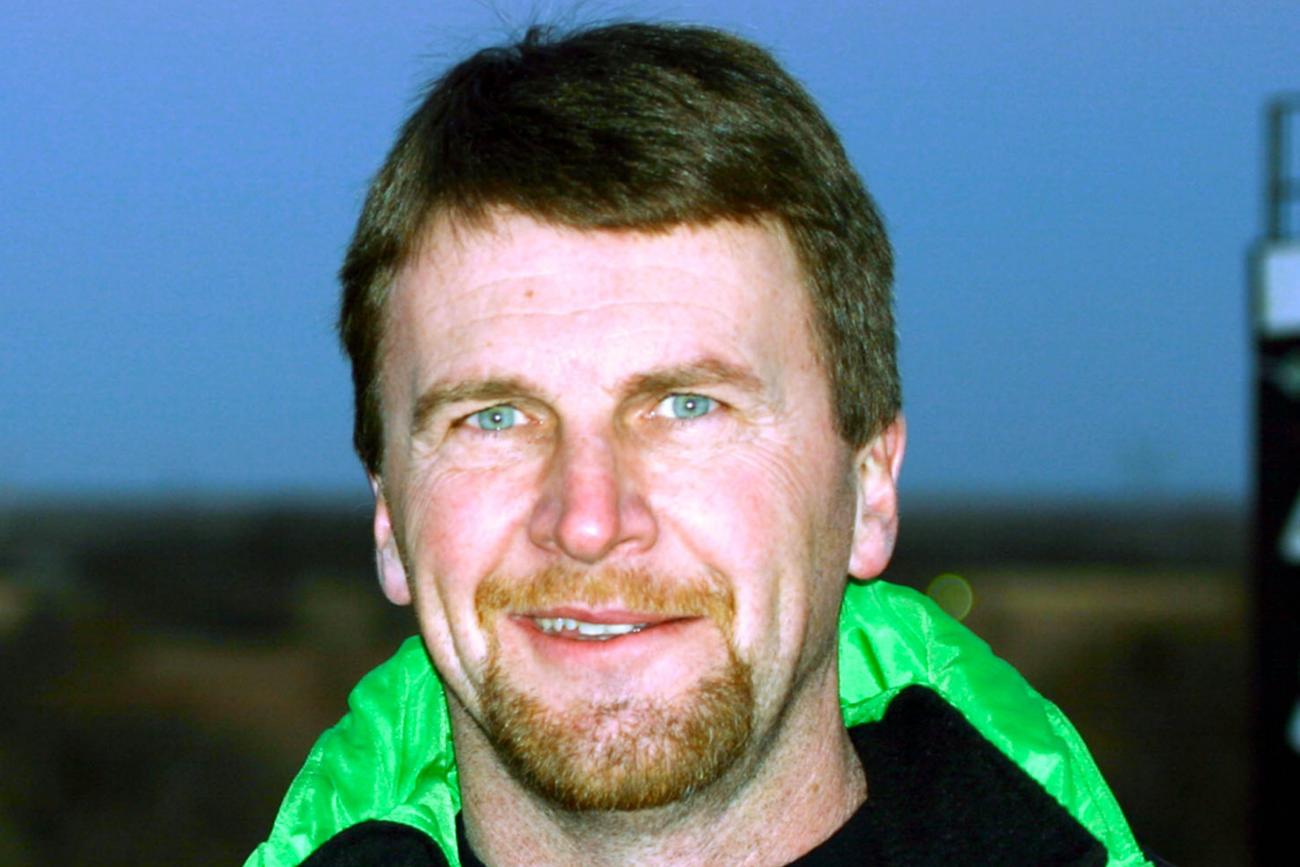 Where Are Dennis Hawthorne

Dennis Hawthorne was a fast guy from Texas who raced the professional circuit for nearly nineteen years, from 1983 through 2002. Hawthorne, a fierce competitor, was known as America’s first arenacross superstar, winning five championships in the early days of the series.

Coming from a family of modest means, Hawthorne cut his teeth chasing money races on sometimes-inferior equipment and learned how to be resourceful. When Mike Kidd’s arenacross series started growing—and selling tickets—Hawthorne realized he could make good money for himself while also improving his supercross skills.

Hawthorne is long since retired and has gone on to become a longtime and successful Kawasaki employee. We found him working the phones at his home office, checking in on his dealer network.

Racer X: Dennis, thanks for taking some time to speak with us. What are you up to these days?
Dennis Hawthorne: I’m a district sales manager with Kawasaki Motors. Right now I’m doing the best we can on getting some products out to dealers and am just focused on our new products. Over the past few weeks we introduced several new bikes, including the wild new H2 sportbike. But I was hired by Kawasaki Team Green as a technician in 1996, and then in 1999 I become a regional sales manager.

I saw that new H2, and it’s very cool. Tell me about your job and what it entails.
Well, I cover all of the dealers in Oklahoma, southern Kansas, parts of Arkansas, and the Texas Panhandle. I see a lot of highway time traveling around to all my accounts, that’s for sure! I probably spend two or three nights on the road during the week. But we set our own schedules, so unless I have travel to the far edge of my district it’s not that bad. I cover thirty-nine dealers in total and sell the full range of Kawasaki motorcycles, as well as all the ATVs, Jet Skis, and side-by-sides. I also sell accessories as well.

Are you still riding anymore? You probably have your choice of demo bikes.
Well, access to the motocross bikes is actually pretty limited. I haven’t been able to demo the new 2015 KX450 yet myself, but it looks sweet. But yeah, I still ride, and mainly it’s just play-riding. And I have a 2004 KX125 and KX250 two-strokers. But even those done get that much use, it seems like.

Right around the time I was getting ready to quit, I went through the whole Loretta Lynn’s process and won a championship. I then went to work for Team Green. It was funny: as a racer I spent all those years trying to get a salary and factory box van, and then when I finally did I couldn’t even race. But hey, you know, I’m headed to a vintage race next weekend at Oak Hill, which is hosted by the Texas Vintage Racing Club [TVRC]. It’s going to be pretty much my first vintage race, and they lined me up a 1979 KX250 to use, so I’m pretty pumped for that.

Tell me a little about your personal life and family.
Well, we live in Oklahoma, and my wife, Teri, well, we’ve been married for twenty-eight years this weekend, actually. She was my high-school sweetheart and has been there all along for me. She is an amazing woman and we have two awesome kids. Stacy, my daughter, she got married this year. I walked her down the aisle, and that was one of my proudest moments of my life and far bigger than any of the races or championships I’ve won. She’s 27 years old and we just learned that she’s going to have a baby, so that means I’m gong to be a grandfather. She and her husband live in Plano, Texas, and she graduated [from the] University of Oklahoma in 2010.

My son, he’s at the University of Oklahoma as well and is set to graduate this December, which is just a few weeks out. He was a racer as well and started to get pretty good, but one day he said to me that he wanted to focus on his education. So now he will have his degree next month. I think his plan is to go back and get his MBA after he graduates. But he’s also been working with Red Bull for a while and they’ve offered him a gig.

Wow, he sounds like a busy guy! How did you feel about his decision to not pursue a professional career?
He has quite few irons in the fire, that’s for sure! Well, he didn’t race too much until he was around 12, so he had a late start. He progressed slowly, and we didn’t mess with the whole Loretta’s thing, but he was really quick there for a while.

If you’ve been around the sport a long time, then you know it’s really hard to be successful as a professional racer. You have to put 100 percent effort into it, and as far as him having foresight to desire a degree in the working world, I certainly wanted to support that. I know firsthand how hard it is. I’m so proud of what both of my kids have done. They have really focused on bettering themselves with different degrees.

We still love racing, but as far as him pushing to the point where he gets a salary out of it, it was just a real steep curve. I have no regrets that he decided to not chase it. We have some real fast guys here in Oklahoma, some of which he grew up racing with—names like [Justin] Bogle and [Trey] Canard and several others. Kevin just chose the wiser path, I think.

Let’s talk about your career, and I think we can sum it up with one word: arenacross.
For sure. Mike Kidd started it as a Texas series in the 1980s, and so it was natural for me to hit some of the event. And then I learned quick that it sure helped me earn some money racing, and it helped me prepare for supercross. After two years of arenacross, it helped me qualify for the main events in supercross. So then supercross came pretty easy for me. In 1989 I got a career best of ninth at the Oklahoma City Supercross. So arenacross really helped me, and Mike Kidd put on a hell of a program. I had an amazing time and spent a decade racing those events. In addition to the championships I won, I finished second in 1991 and 1992. Then in 1993 I was super motivated to win it, but I got hurt. That was kind of it. I tried to come back but then accepted a job with Kawasaki. So I can say that I was a professional racer, which not many people can say. I traveled to a bunch of places, places like Australia, New Zealand, France, Mexico, and it all stemmed from my results racing arenacross and motocross. So arenacross was really good to me.

Some of those arenacross guys can clear some good money. How was it for you back then?
It was good. There were two classes plus the Dash for Cash, and you raced both Friday and Saturday nights. The Dash for Cash was always cool. The crowd would get pumped for it and throw in some money. One time I think I won $1,800 in Fort Worth, which was decent money back then. But if you swept the whole weekend, you could do really well. It sure offered me a good income. During the summer off-season I would do concrete work, but mainly just to keep me busy. It was lucrative enough for me, though, during the series. But it was all purse money. I never got a salary. I had bikes and parts deals, and the purse money was the only cash that came in. Unlike today, I had no win bonuses. But man, if I had those results today, I would be sitting pretty!

It seemed like arenacross took a big jump forward when Buddy Antunez came across.
We had an influx of 125 supercross guys—Antunez, [Denny] Stephenson, Jeromy Buehl. They were all supercross guys who were chasing the money, and they progressed the series, and then TV came on. When [Josh] Demuth came along it was really good for the series as well. Demuth put in some very good rides and even bested [Damon] Bradshaw, and it just kept building and building. I think Ricky’s [Carmichael] Road to Supercross program now is great, and it gives the series a good bump. Even back in the 1980s, Mike Kidd would sometimes bring in some big names. Guys like Guy Cooper, Ross Pederson, and Jimmy Holley would keep things interesting. But I don’t think people really appreciated arenacross guys until [Tyler] Bowers pulled off his win at Vegas last year or whenever it was. I think that was a real turning point for the series, and now he has a big ride for supercross. So that means a new champion in arenacross!