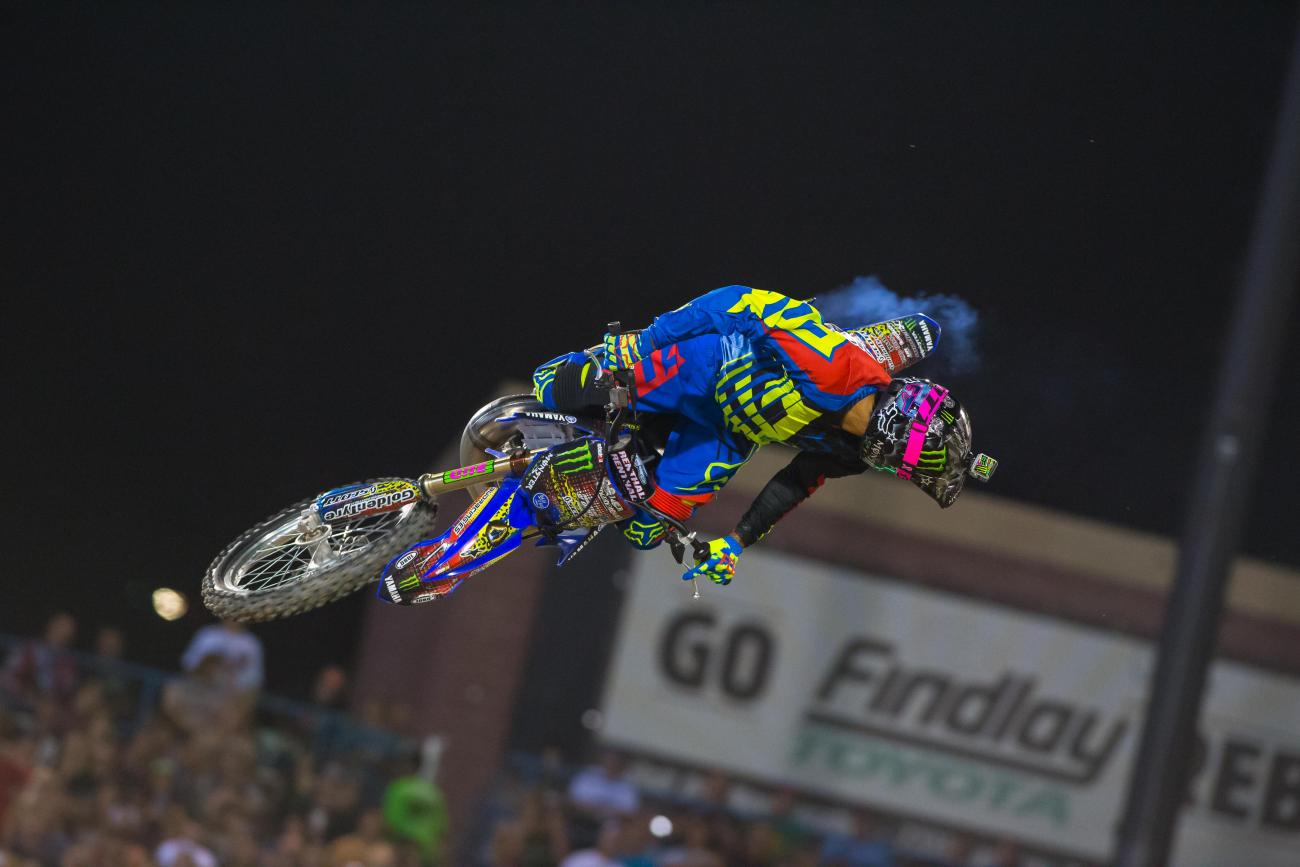 Ever eat from a bag of party mix? It's basically a collection of leftovers from the shop floor at the junk food plant....turned into the best snack ever. You get pretzels, nacho chips, and cheese curls in one handful, which is as close to bliss as we have found. Now, some pieces in the party mix bag aren't any good on their own, and other parts can easily stand alone. But together, it's random and it's good.

Welcome to our bag of party mix: The Word On. We'll show you whatever we want. Enjoy the treat.

[Note: This feature is ever evolving, so if you have a bitchin' idea email Chase Stallo at chase@racerxonline.com or drop us a comment below.]

This week in social media

Front page of the news in the Capital of South Africa!

There’s no doubt growing up as a young boy in Oregon, Josh Hill knew that one day he would grace the cover of a South African newspaper! Congrats, Josh.

Face is breaking out and it's not good, but you know what that means, I finally hit puberty!

Welcome to the official team mate @byrner26 Excited to have not only one of the coolest dudes I know in my corner BUT my best mate there to suffer with.. We coming for us 2015#oldisthenewyoung #ibelieve

Chad Reed is bringing fellow Australian Michael Byrne into the TwoTwo fold for 2015. There has been no official announcement on his role, but from what we hear, Byrne will help test, serve as a training partner, and fill in in the case of injury. We’ll update as more information becomes available.

video of the week

Each week we’ll feature a video of the week: something cool, funny, or stupid that we stumbled upon while searching the World Wide Web. There’s a good chance it won’t be moto, but you’ll want to stick around because there will always be something good.

This week, our featured video comes from the 2014 Red Bull Rampage, which took place in late September. If you’re unfamiliar with the event, it’s one of the craziest mountain bike races in the world, drawing “slopestyle riders, downhill racers, and natural-terrain freeriders together in one big-mountain test of all-around bike skill” in the mountains of Utah. Check out this insane seventy-three-foot backflip from Jeff Herbertson on his amazing run to seventh in this year’s event.

Racer X contributor BrownDogWilson was recently out at Milestone MX in California and found Ryan Villopoto putting in some testing time in preparation for the 2015 FIM World Motocross Championship. Check out the full gallery, which also features Tyla Rattray and Fredrick Noren, here.

Today David Pingree is known best for his weekly Racer X Online column “Ask Ping” and his other work with the company. But back in 1997, Ping was a member of Mitch Payton’s Team Splitfire/Pro Circuit Kawasaki squad alongside the one and only Ricky Carmichael. During his twelve-year career Ping racked up four 125SX wins, while Carmichael had a lot more (sorry, Ping). We asked Ping what it was like to watch a young RC:

"I think everyone on the team started out pretty excited to see what Ricky was all about. He had so much hype coming into pro racing we wanted to see what all the fuss was about. He wasn't the model athlete in his early years, but when he got on a bike he was just unreal. We had some amazing times that year going out to Reche Canyon and riding at McGrath's track down the street from where we lived. I lived with his mechanic, Chad Watts, at the time and he spent a couple months in California testing and riding. Honestly, I didn't think he was going to be as dominant as he was when we first started riding together. He was fast but probably not the quickest at the test track early on. But when he went back home to Florida he went into boot camp mode, and he was a different guy when he showed up to Indy that year. Crashes slowed him at the opener, but he went on to win a bunch of races.

"I spent a couple weeks at his house that summer in Florida, and I was shocked at how much he rode. He wasn't doing much off the bike back then, but we each burned five gallons of gas each day. They were long days and Mama C was all over us like stink on a monkey with lap times and effort. If you were just cruising around she jumped all over you. I broke my finger at Gainesville that year and almost skipped Daytona. Mitch likes to tell the story about the manager [Mike Hooker] calling him and telling him that I didn't think I was going to race. He called me and told me that I was a pansy if I didn't at least tape it up and go try to race. I ended up pulling the holeshot and leading for almost twenty minutes before settling for third behind John Dowd and Tim Ferry. Anyway, that's the reason for the single handguard at that race. I finished on the podium at the Vegas finale, which was a good race for me. Aside from those rounds, it wasn't a great year. I struggled with some little injuries but was thankful Mitch kept me on that year."

Last Friday, The NY Times dropped a huge story on the state of affairs in Formula One and the troubles surrounding the sport. On track deaths, rising costs and the loss of teams have painted a blurry picture of its future. From the Times:

Estimates published by the British magazine Autosport, showed that the most lavishly financed team, Mercedes, has a Formula One budget this year of $540 million, followed by Ferrari with a budget of about $440-million and Red Bull with about $385-million, part of an overall annual cost for all the teams that Autosport estimated at $2.7-billion.

Under the Ecclestone formula, the highest payout to any of the teams at the end of each season has been the $170 million paid to Ferrari. At the back end of the grid, a team like Marussia has operated on an annual budget of about $110 million, with the prospect, at best, of a payout from the Ecclestone fund of about $65 million.

Some estimates have put the average cost of running one grand prix car for a full season at $13,000 a mile. Small wonder, then, that many of the sport’s insiders have arrived in Austin wondering whether Formula One can act soon enough in reining costs to assure the sport a future.

If you’re a motorsports affinicado, it’s definitely worth your time.

Reader Question of the Week

From smee113 under the story 250 Words: Class Is Full: Can someone explain how the amateur classes work? What's the "hierarchy"? What classes are "important" and which aren't? Whats the difference between an A Class rider and a B Class rider? I get that A Class is better, but do riders get to choose which class to race in, or is there some kind of "point-out" system?

Weege: Good question, and probably something we take for granted. To sum this up quickly, amateur and local races divide full-sized (non-minicycle) classes into three skill levels: A (expert), B (intermediate), and C (novice/beginnger). The fastest and most experienced amateurs skip the C class because they already cut their teeth in the mini ranks. They become B riders, and yes, you can "point out" of the C and B divisions and eventually be forced up. This pointing out situation is always one for controversy because a really fast kid can rip in the B class and be as fast as an A rider but still not have completed enough B races to point out yet. Happens all the time and is perfectly legal.

Which class is the most important? Generally you'd think the A class, because it's the last step before pro, but lately, the B ranks have become just as, if not more, critical because teams are signing riders earlier and earlier. If a kid rips his year in the B class, he might punch his ticket to a two-year deal with a guaranteed pro spot. Just ask Justin Hill and Anthony Rodriguez, who did exactly that. Injuries cost them their entire A year, but the teams didn't care. They saw what they needed in the B class.

If you want to dive in deeper, check out this story breaking down the Loretta's classes.

Two terms we're going to hear a lot over the next two months: comfort and speed. They're standard terms, but their meanings are very different and specific when you're talking about this sport. Speed here isn't measured on a radar gun, it's just a motocross thing. How fast are you? Are you slow? We know what it means even though we can't see it or put a number on it. Right now riders are working on fitness, and later they'll work on speed. What is that speed? Well, it's that old thing: You know it when you see it.

As for comfort, expect that to be the most-uttered word of the off-season. Everyone is looking for comfort on their new bikes. They don't mean leather seats or cup holders, they mean a bike that doesn't scare then when they go fast. Because comfort equals speed. That's something we all know.

Since 2008, Steve Matthes has been churning out podcasts with some of the greatest in the sport. If you've never dived into his archive, I encourage you do so. Each week (or maybe not each week. We haven't decided), we'll highlight a couple that Steve, or I, or any member of the staff has enjoyed over the years. We'll kick if off with Steve:

"So I'm supposed to try to highlight an old show that you guys should go back and listen to. Did I say highlight a show? Well, you're getting two shows to start. More bang for your buck, bro. Dave Arnold, like Roger DeCoster, is a part of American motocross history. The former factory mechanic to Marty Smith turned Honda team manager worked alongside DeCoster to manage the star-studded, all-powerful Honda team of the 80s and was a driving force for America's re-entry into the Motocross des Nations in 1981.

"Dave's still in the sport today, helping out the GEICO Honda guys, and is truly one of most accomplished people in the pits. He's so accomplished I couldn't get his story into one single podcast—I had to make it a two-parter. Listen in as Dave recounts some amazing moments in motocross history that he was a part of, and to hear him talk about the late 80s/early 90s Honda team drama is riveting.

Thanks for checking it out. Check our Part 1 and Part 2."

Is retro the future? Ducati got a lot of attention with the introduction of its Scrambler bike a few weeks ago, and it looks like Husqvarna might want to jump into a similar market via these 401 Concept bikes. On-road? Off-road? Whatever, they look fun. Within the press release for these images, it says "The 401 concepts also shed light on the future direction of Husqvarna, and a return to the street segment!" This could be good. Stay tuned.