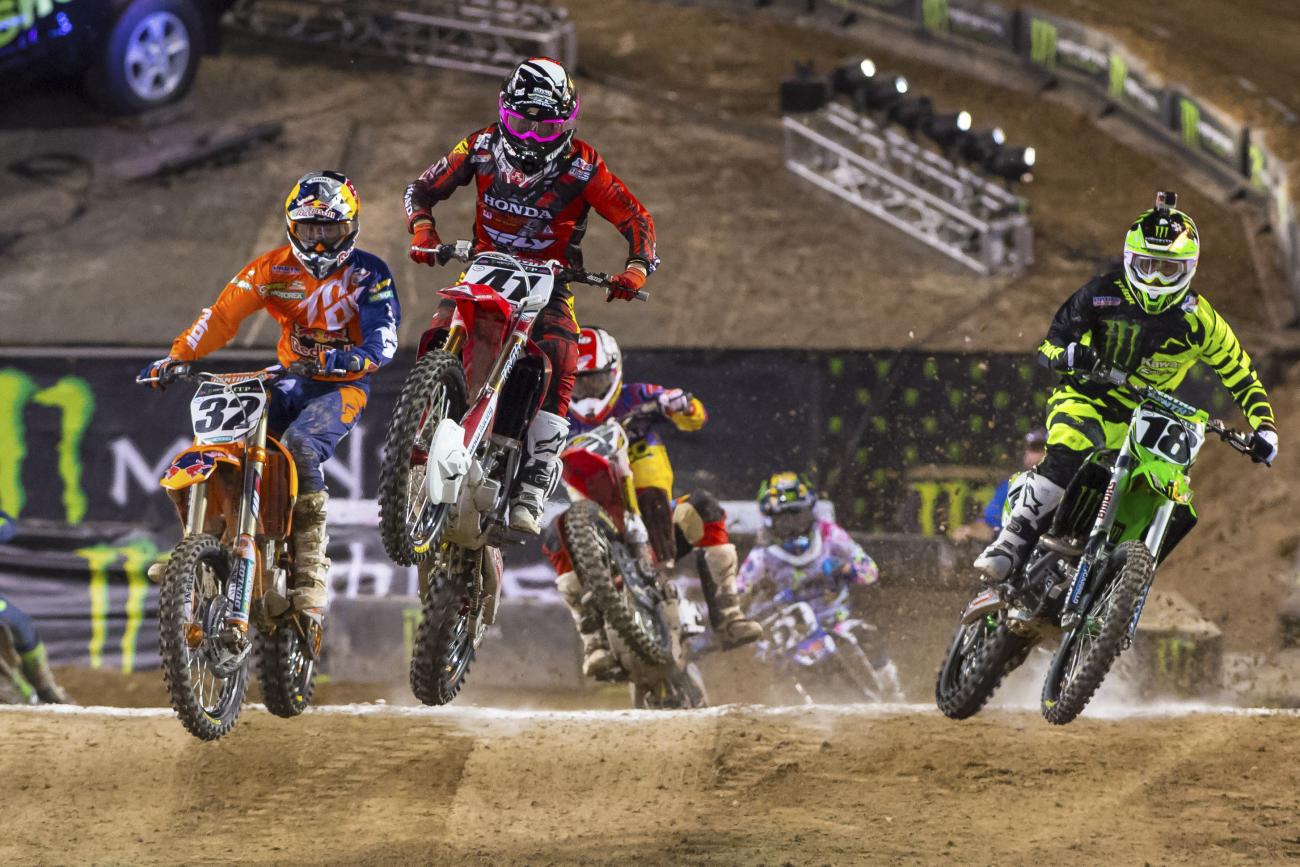 Breakdown Inside or Out

The 2014 Monster Energy Cup has come and gone. Davi Millsaps wowed everyone with a win in his first race in seventeen months. Before Saturday, Millsaps had not won since San Diego SX in February 2013. Trey Canard was the heartbreak story of the night, so close to winning all three main events and the one million dollars. Justin Hill threw away a sure podium overall finish in the final main event, sliding into the Las Vegas adobe at the end of the long, stadium-entry straight. Eli Tomac was also strong all night, if not a bit overshadowed, ending up second overall and looking like a contender in 2015. Even with all of this racing and battling going on, though, I felt that the results were almost pre-determined within the first thirty yards of the race.

The start of this year’s track was unique. Whether that uniqueness was good or bad probably depended on your gate position. It was a split start, which we have seen before, but it also incorporated a big rolling jump just before the first turn. In addition, the inside gate was a straight line to the inside of the first turn. Those two factors caused one undeniable result: The riders on the inside had a massive advantage. Those on the inside could completely control the first turn. They had the shortest distance to the turn and also could manage their speed over the jump to make sure no one could sweep around them. It was a huge advantage and it showed in every start. The riders who did well in the first main event (Canard, Hill, Millsaps, Tomac) had the best gate picks, so they were all at the front on the start of the second main event, and thus the third.

It was a great deal if you were one of those lucky few, but if you happened to be on the outside at any point, it was a vicious cycle that seemed unlikely to avoid. When watching the starts, I could see the inside riders all fighting for a top spot while the outside guys were doomed from the get-go. It is just how racing goes sometimes, but it was a bit of a letdown because some very talented riders never had a legitimate shot at battling up front. I do realize that everyone makes their own luck and the guys on the inside earned those spots through qualifying and race results—that’s very true—but I do wish we could have seen a bit more parity at the front.

The Monster Energy Cup is a great race to try new things and new ideas. Three main events, the Joker Lane, the availability of rider communication equipment, etc. are all cool variables that we only see at the MEC. The setup on the start of this year’s event was just another one of those new ideas to try out. The only way to improve anything is to introduce different thoughts. While I don’t think the start was a disaster, I do think it took away from the racing a bit. I would have loved to see riders like Josh Hill, Justin Brayton, and Weston Peick get into the mix. It had to be frustrating for them to head to the starting line knowing that the odds were against them getting any sort of decent start. Sometimes the simplest way is the best way, and that may have been the case last Saturday night.