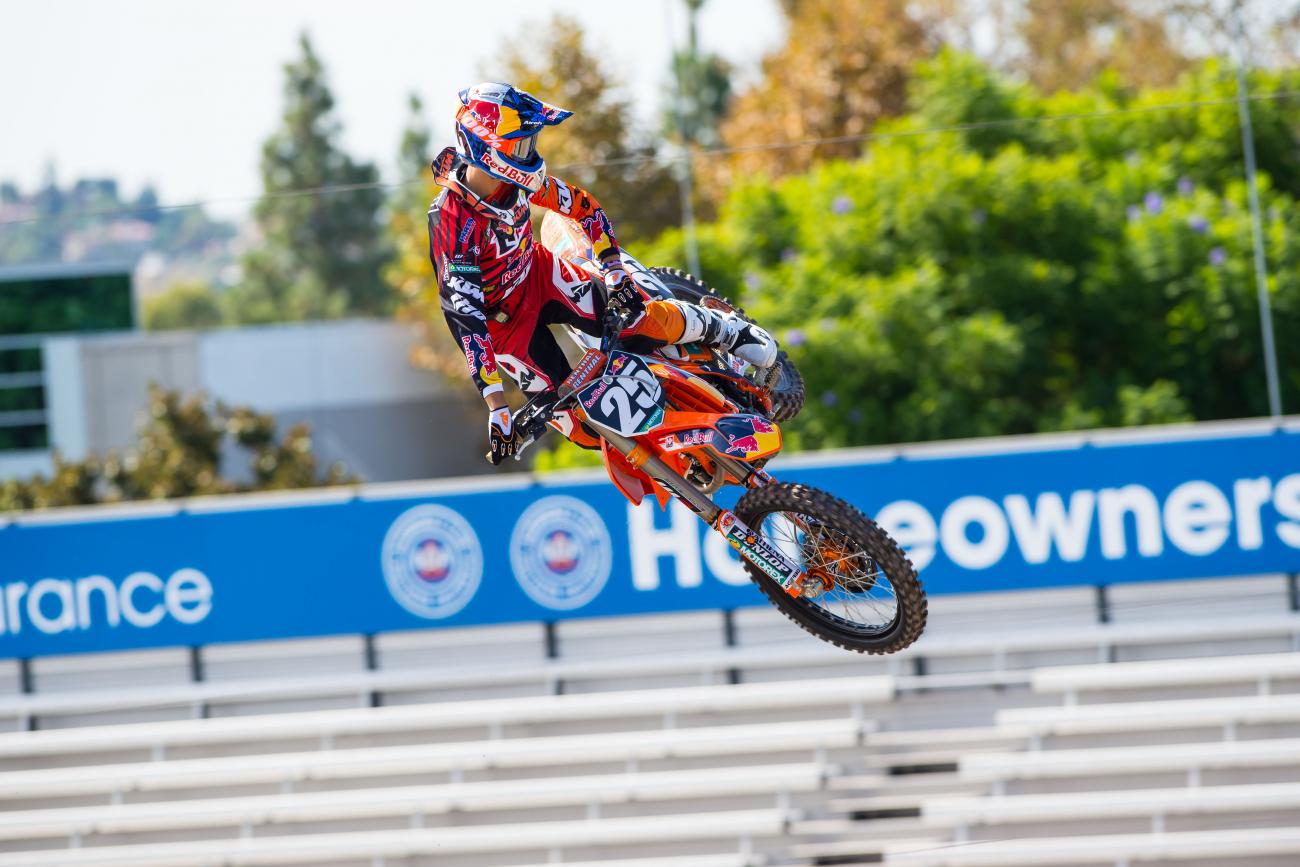 Red Bull KTM’s Marvin Musquin was clearly the man to beat at Red Bull Straight Rhythm after setting the fastest times in Friday’s practice—plus, he’s got great credentials no matter what or where the race is. He delivered a solid performance with the target on his back to win, and, as usual, he was happy. He’s like that no matter where or what the race is!

Racer X: That was pretty good, go out and win and everything.
Marvin Musquin: [Laughs] That was obviously the goal. I really wanted to win and I felt like Friday at the track I may be quicker than the other guys and I was doing better and I was the fastest. Obviously today went really good. It’s never done until the finish line, and you had to cross the finish line twice to win, not only once.

It seems kind of sketchy to be lined up down here knowing that you don’t have a lot of time to make up for a mistake.
For sure. That’s why Red Bull Straight Rhythm; it is what it is. We were doing fifty-two, fifty-one-second runs. One mistake, like a little mistake, it’s okay but a big mistake is not okay. You really have to be smooth. There were some sections where it was easy to make a mistake and others it was pretty simple; we were pretty much doing the same thing. I actually never did the rhythm that some of the guys were doing on the 250, that triple and stuff like that. I really wanted to stick with what I was doing best. I knew I was going to do every run good.

Making sure that you have a consistent run?
Yeah, I think that was the key. The whoops were getting really dry. It was so hot today and the sun was like burning and so dry. My mouth was so dry after each round. It’s like a lap time at a supercross practice track.

What’s it like when you have the lead? Do you really know where the guys are? You can’t really look.
Yeah, but you do because you hear the bike of your competitor on the side. I feel like my semi-final was tougher than the main because Justin Bogle was doing pretty good, and I felt like it was easier to beat Justin Hill than Justin Bogle. But it was tough all the time. It’s stressful. You’re like, I don’t want to do any mistakes and I want to be fast. My starts were okay and my bike was doing really good and I was shifting at the right time and going through the rollers. I’m happy. I felt like everybody was doing better and better since yesterday. Today everybody was going faster and faster. It was getting really interesting and really stressful, because you’re like, “Oh, those guys are going the same speed.” You really have to make it a good run. But I’m happy to win the first Straight Rhythm. I really want to thank Red Bull for putting this event together. They did a great job. I think the fans really liked it. They were standing up on the stairs over there. I think they loved it. All the riders I talked to, they were so excited. They really loved the Straight Rhythm. They built nice jumps and a great finish line where you can whip it like crazy. It was a great event.

Maybe a little more water next year?
They tried to water. They actually watered. It’s not easy to water like crazy because then it’s slick and dangerous. And obviously it was over 100 maybe today, so it was so hot it was getting dry really quick. But that’s the first year, so they’re going to be better next year, that’s for sure. I can’t wait for next year.

Talk about the bike. Is that last year’s bike? Is it next year’s bike?
No, I have the same, the 2014 bike. I rode it this week at the test track with turns. I didn’t practice on a straight line, but I practiced on the supercross track, so it’s kind of the same. We had some good times. Enough time to remember the track and learn the track. I think they did great. Eric Peronnard did a good job, Jeremy at Red Bull and all the TV crew. I’m sure lots of my friends and fans were watching live on the Red Bull website and for free. I think it was pretty amazing to put this event together, and for a first-time event it worked out really good.

Did you make any changes? There were a few dudes in the 450 Class who ran their forks different. You didn’t have to turn so you can change the setup.
That’s what I wanted to do, have maybe stiffer forks. But we made just one change during practice yesterday and we stuck with it. Then I think the riders make a huge difference.