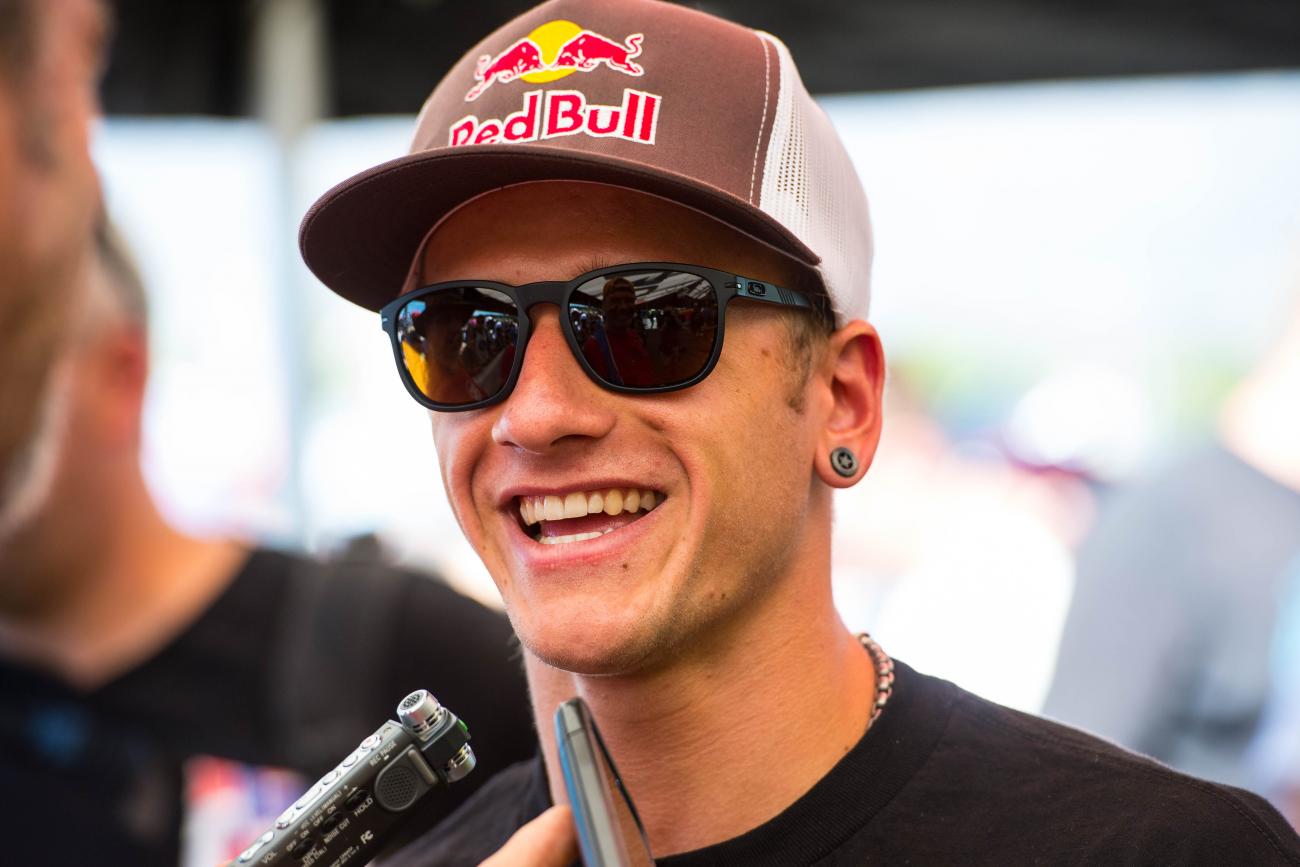 It wouldn’t seem possible that a rider would be looking for a new bike with a different feeling on the heels of winning the Lucas Oil Pro Motocross Championship 450 title, but Ken Roczen has apparently been looking to try something different for awhile. Roczen—who was raised racing Suzukis—is indeed leaving his old employer, Red Bull KTM, to ride for Soaring Eagle Casino/Jimmy John’s RCH Suzuki for 2015-2016. Roczen explained all in a press conference at Red Bull Straight Rhythm.

Racer X: How much can you say about the beginnings of this? When was the first time you started thinking about riding Suzukis?
Ken Roczen: I was thinking about it for a very long time just because I was at a point where I struggled a bit with the bike in 2013 and before. I’ve done my duty together with KTM. I love them, love the team, and everything, but KTM has their very own characteristic, the bike. At one point I was just like, you know what? I don’t believe in my bike anymore as much and I just felt like it was time for a change. We’ve been together for like four years or something. Luckily we have done a fantastic job this year and got the outdoor title. It was good to finish it off like that, but for me it was just time in my head for a change. I chose Suzuki because I like the RCH image, and I think together me and RCH we can do something big. I have 100 percent faith in the bike because you take them out of the box already and they’re just so good. I have a lot of good memories on Suzuki. My decision when I went with RCH, people were like, “It’s not factory.” Yes, we are factory. It doesn’t even matter; I have so much faith in the bike I’m like whatever. Just give me the bike and I’ll make it work.

Isn’t it about finding a bike and settings that work for you specifically, not necessarily about having factory parts or whatever? You can make it worth it if you’re comfortable on it?
For sure. It’s important. We have done some amazing changes to the engine and stuff. We got that way, way better, which helps out a lot. But I think in my eyes you can buy a Suzuki, I don’t even know if you need engine work really...more is not always good. It’s about putting it on the ground. I think if you have the right suspension guy, the guy you can trust, and I even have one in Germany. A guy that I’ve been with him since I was little, and he’s absolutely amazing. If I would have to I would buy a bike, get my suspension done with him, and I will be good to race.

Is that who we saw at Salt Lake a year ago? I think there was a guy that came out, no team uniform...
Possible. I think he was at a few races.

I knew you when you were on Suzuki before and it was 250, smaller bike. How much of a change is it to jump to the 450?
It is. Obviously it’s been a very long time since I’ve ridden a 250 Suzuki, but that bike was trick. We had so many cool parts. KTM was always the fastest engine over there, but I had such a good chassis and such a good suspension, I didn’t need that engine. It would have been better if you would have more, but I just made it work. I’ve always loved my bike.

How much of a difference is it on this one now? I know nobody’s going to sign up for a new team and say, “Man, this is terrible,” but how do you like the bike, and how are you settling in on it?
It’s amazing, the characteristics that are different. It’s crazy how much you notice it and we have only had a few days of testing and we already have the bike where I’m like just leave it like this right now and I’ll ride it and ride it and ride it and get confident on it. I think we just have to do some little changes, meaning once I’m good and confident. I’ve been taking five-six weeks off completely. I just want to get my fitness back. I think at one point when I start riding the bike a little harder I think I can go a bit stiffer on the suspension, but for right now I’m already really comfortable.

Where are they going mount the electric start for you?
We’ll see by A1 what happens.

How long does it take you to get that feeling back and get comfortable and settled in on it?
It depends. If you’re riding an outdoor track not long, it’ll take a day or two. But for supercross you have to be so precise. In general if you come back from an outdoor season and do supercross everything kind of feels weird, it feels super stiff. It’s just so much different. Right now, especially we started testing really early, so now with the bike I have I really just have to put in time. Like I said, in supercross it’s a little bit more difficult. You have gnarly tracks plus a totally different bike, so it’s difficult. But it’ll just take a little bit of time. I’m not even worried because I have three months right now and you don’t need three months to get ready. I think we’re on a good schedule.

A lot of racers over the years, anybody who’s raced for a period of time and stick with one particular brand for a few years, when they switch things seem just amazingly better a lot of the times just because it’s different. It brings something new. How much of that are you dealing with too? Like, first time you threw your leg over it, it feels different. Maybe it’s wider in a spot or narrower?
That’s the thing, the Suzuki is a really good bike. It’s very narrow. I think I prefer the characteristic of an aluminum frame just because the frame is stiffer. Where the KTM, it’s a wider bike, it has a lot of power, and it just bends weird. It flexes very weird. Plus the suspension, it’s more of a dead feeling. For some supercross tracks it seems good, but if you take a Suzuki off the stand, it’s so free and it’s so plush, and that’s comfort. That’s a pretty big thing that I was looking for because that’s the stuff I’ve been telling KTM the whole time; I need more comfort. So the change is done now and I’m super happy about it. Like you said, it’s a lot mentally so it’ll be just fine. I’m 100 percent sure.

Is it two years?
Yes.

What was it about RCH versus Yoshimura or some other team? What was it that attracted you here?
I don’t think Yosh was ever an option. One of the biggest things was Red Bull. All the teams they come with options. Obviously if you go to Factory Kawi you have to be Monster; there’s no way around it. I could have had my own gear deal, but here I have my own gear deal, energy drink, plus the image of the team with Carey and Ricky.

Free concert tickets...
Free concert tickets, free singing songs on the phone, I’ll just call in and start singing…plus I know Suzuki, and I think for me that was just the right direction to go and Red Bull was a big, big part of it. The last thing I wanted to do is drop Red Bull. I’ve been with them for so long, and they’re so solid that there was no way for me to leave them out.

You’re a very big guy on social media. How hard was it to stay off there during that time from the end of the season to now?
Super hard. Especially once I started riding. That was the worst part. I’m like, “Man, I want to post something so bad!” The first couple of days I posted so much because I already had pictures and stuff. It was hard. At one point I enjoyed not being on social media too much because it takes up way too much time of my day, but that’s what makes you happy, so you should do it.