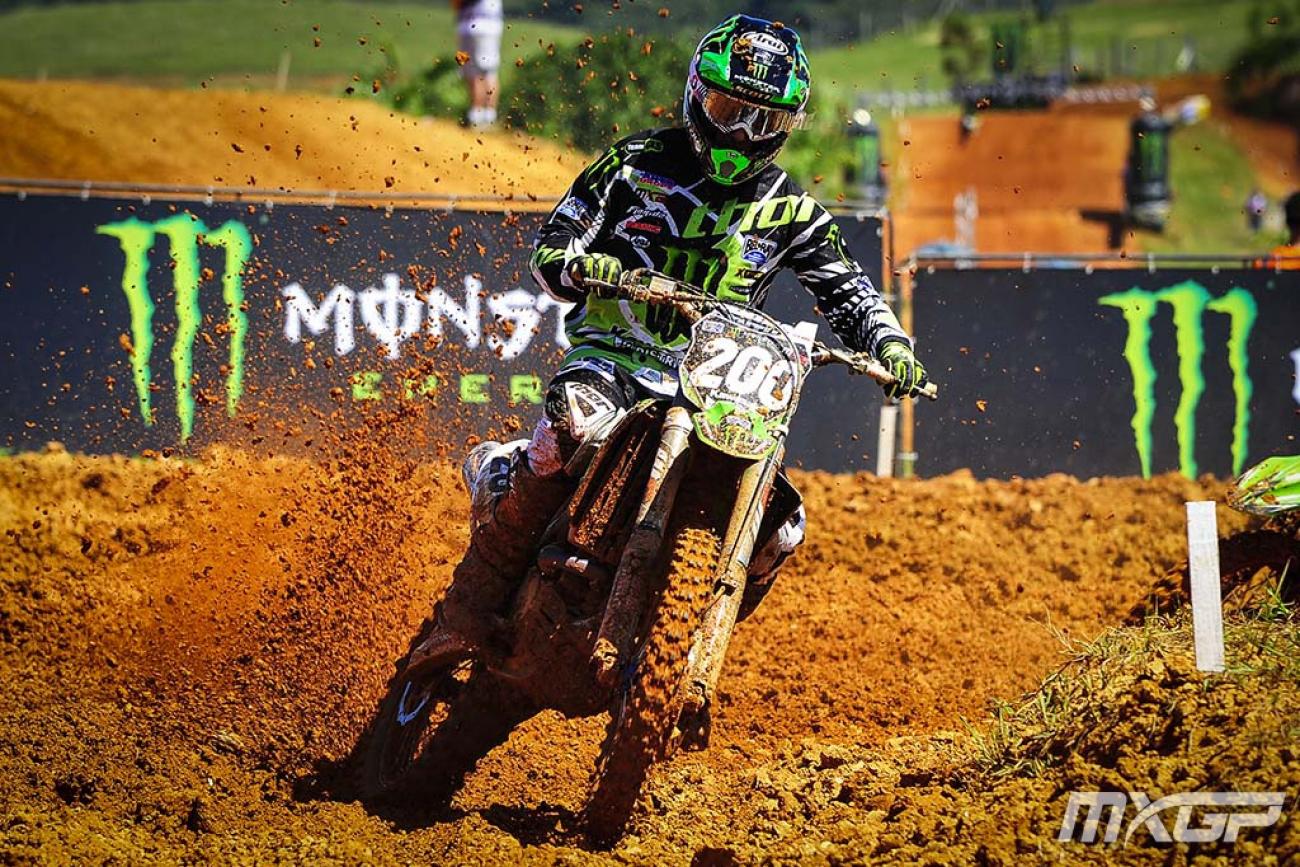 250 Words Rise of the Swiss

From the five Grands Prix and ten motos of this year’s MX2 FIM Motocross World Championship just two nationalities have trodden the top step of the podium. The 250 category is accustomed to the Dutch national anthem with Red Bull KTM’s Jeffrey Herlings holding the class in his grip since 2012 when he grabbed the first of two titles and owned the most motos that season. Countryman Glen Coldenhoff ensures that Herlings is not alone under his flag; “The Hoff” was one of just three GP winners in 2013—Herlings’ pièce de résistance—and one of four riders to snare a moto chequered flag so far in 2014.

In addition to this Dutch success, MXGP fans and observers are used to French, Belgians, British and Italians filling out the MX2 ranks over the years but the recent emergence of Switzerland is quite astounding. This is a country with a population of just eight million, and hasn’t hosted a world championship event since 2001. But suddenly, the watch and chocolate experts are benefiting from a fecund patch of racing talent at the highest level.

Last month CLS Monster Energy Kawasaki’s Arnaud Tonus, the current standings leader, gave the Swiss their first GP victory in MX1/MX2 history and is now fulfilling the promise he showed since arriving on the world scene as a teenager in 2009 before enduring two years of disruptive injury set-back. Valentin Guillod is becoming the holeshot king of the category on the Standing Construct KTM and was a convincing European Champion in 2013. Rockstar Suzuki’s Jeremy Seewer, at nineteen, is the rookie but has already established himself as a quick top ten runner after just five rounds, all while still balancing a timetable of studying and racing.

Is there an explanation for this Swiss surge? Tonus himself believes that the national 85cc supercross series that ran through the beginning of the last decade helped raise the technical level of a generation of Swiss juniors across the country. Guillod was among his peers in the competition that used to culminate at the Geneva Supercross; one of the biggest winter indoor meetings in Europe.

While the nation could count on a rider like Julien Bill to catch attention in the now defunct MX3 (and can look back to the likes of Philippe Dupasquier for 125cc GP podiums) Tonus also credits the influencing style and speed of a rider like Marc Ristori, who tried to make a name for himself in Grand Prix until an unfortunate racing accident ended his career in 2007 at the age of 26. Guillod attempted MX2, did not shine at first, but then found the right guidance and advice under the eye of former GP winner Yves Demaria and has short-shifted his career upwards.

Thomas Ramsbacher, team manager of the Rockstar Suzuki Europe team and the man that nurtured and unveiled Ken Roczen to the world, believed that Seewer’s proximity to the German rather than the French side of the country helped the teenager’s early skill in national races across the border turn heads.

“We saw Jeremy when he was nine years old and he has been fortunate to have a very good family and support behind him,” the German team boss says. “The family said to us, “Don't push him, because he is not Roczen,” and they were referring to the different speeds in development. So we went a step at a time in races like the ADAC [MX Masters German Championship] and he is really coming strong.”

Seewer is similar to Roczen in some ways: friendly, unfazed, carrying an easy flexibility on the bike and seemingly very strong in spite a small and wiry frame. The depth of his potential is quite exciting considering that he won’t become a full pro until June. His name is already on the radar for other teams and brands looking for the next bright light in a division that carries the polemic 23 age ruling—although there will soon be a motion from inside the paddock for a review of the regulation.

For now Switzerland has a rider fighting for the MX2 championship, winning races and becoming a hot prospect for MXGP in 2015, another making a bold show to be one of the top names for MX2 next year and one more that is demonstrating some remarkable potential for golden seasons in the future. There is no other nation poised in a similar position for success.

All that is missing now is a return to one of the most scenic countries on the continent for a Grand Prix.