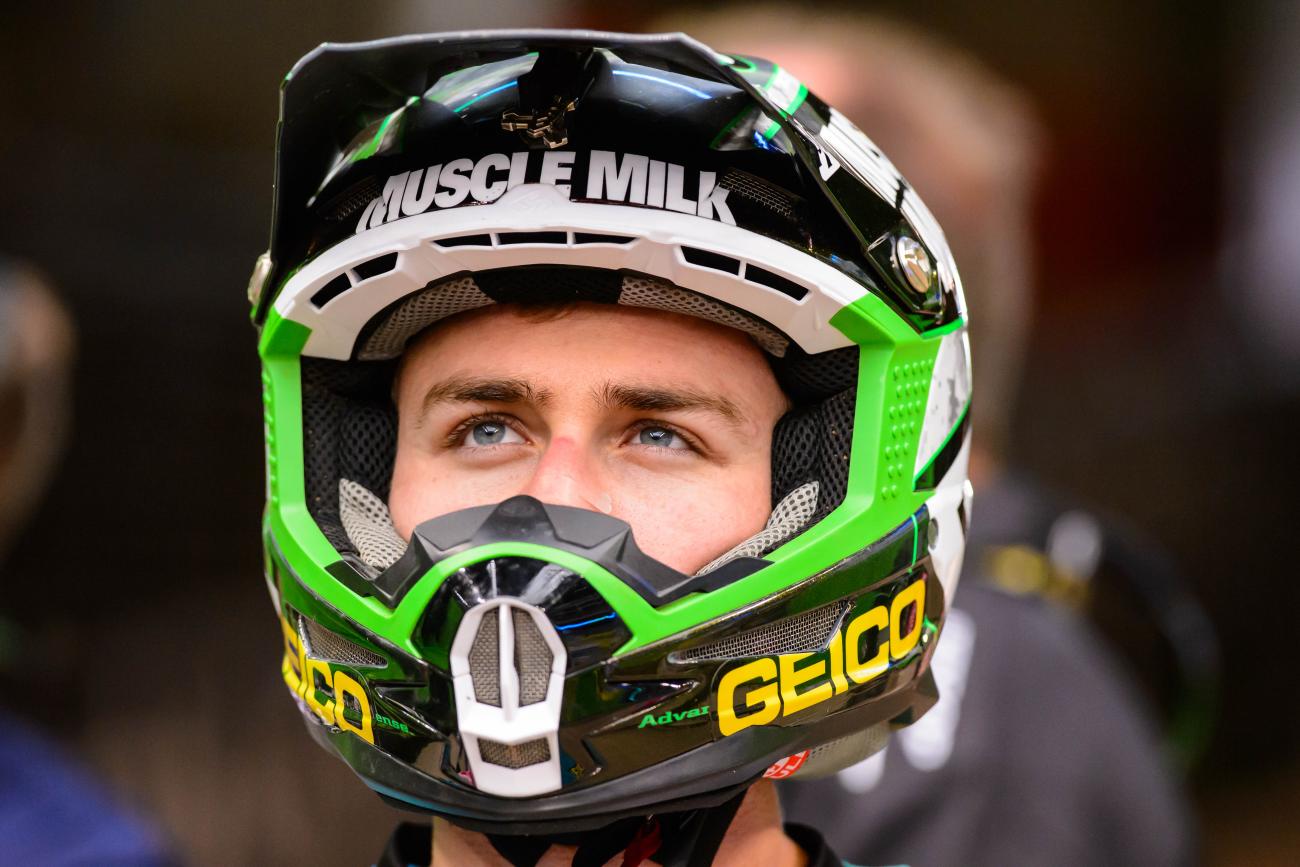 With the continued excellence of Ryan Villopoto and Ryan Dungey, the renaissance of James Stewart and Chad Reed, and the rise of Ken Roczen, it doesn’t seem like the 2014 Monster Energy Supercross season was missing much talent. But all of the headlines from those riders have overshadowed an unfortunate run of luck for GEICO Honda’s Eli Tomac, who surely has the talent and drive to win 450SX races of his own. Circumstances haven’t worked in his favor though, including some injuries and missed races.

How’s Eli holding up through it all? We chatted with him after Houston to find out.

Racer X: Tonight you were riding well. The result doesn’t make it seem like that but I guess there was a crash somewhere? I didn’t see it.
Eli Tomac: I cased the quad god [laughs]! I started out around 7th, made a couple passes, got by Stewart and Short, then somewhat inching my way towards Trey. And then around lap 12 is when I ended up casing that quad. Honestly I didn’t think I needed to give it the berries every time on that thing because the time before I was doing it totally fine and easy. I must have not came off the dragon back with the same momentum as I normally did or something and didn’t give it the berries and just ended up hanging it a little bit. Honestly I thought I was going to ride it out totally fine, but it just stuck weird—obviously you’re coming up from so high and so far that something’s got to give.

Are you getting frustrated? You seem like you’re in a good mood at these races, but it seems like every time something’s going well something strikes you back down.
It is frustrating because it’s just a weird season for me. I think now we are starting to somewhat make progress and get going and build some strength. I think I can be a little bit stronger in the main event too, have a little more oomph. But that just comes with time and getting a little more grizzled, I guess. It’s just been kind of up and down. I haven’t been totally dialed in. Like today early on I was struggling in the big set of whoops. I wasn’t doing bad but that’s where I was getting worked on my qualifying time. I was one of the fastest guys around the rest of the segments but then like segment two, with the whoops, that’s where I was getting worked by like six tenths.

The shoulder injury, is it the same thing over and over from back at Anaheim 1? Is that what you hurt again at Daytona? Or is it a different deal?
Daytona wasn’t really a shoulder issue. I actually dinged my head pretty good. I did pass the concussion test there, but like barely passed it. I kind of whacked my head twice. I never got unconscious or anything like that but my eyes were kind of funky. At that point it’s not worth to risk your head when you hit your head like that. And where I’m at in the season it wasn’t worth riding, so I went back home and took five days off. So I did more testing again [before coming back].

So it wasn’t the shoulder re-aggravation that really was the issue? That’s pretty good now?
On the bike I don’t feel it all anymore. It’s not as strong when I do my gym work. It’s not as strong as my right shoulder. It’s not as good as it once was. It’s getting there. Actually the weakest position for it is when I shoot my bow. So I was like, all right, I found a new muscle that’s weak. I’m going to do some therapy, doing some bow hunting and some archery shooting! So I started doing that and it’s actually feeling really good.

Do you just write off supercross? Are you excited outdoors is only a month away? Because of how this has gone do you put extra emphasis on that, are you extra excited about it?
I am really excited about outdoors … but I really want to start getting some finishes in this supercross season because I don’t want to be left behind starting next year either. I’m going to be on these chassis again. At least I’m getting to a point where I’m starting to figure some stuff out to where it’ll carry into next year.

We’ve heard you’ve gone back and forth between production stuff and works stuff. Where are you at now?
I’m on works stuff and I’m going to stay there.

So you’ve turned a corner here? That’s the way to go?
Yeah [by using the works stuff], I can just work closer with Honda and it’s a better situation.

So when we see you at these races we might think, “He’s so far back in points this doesn’t matter,” but there’s still a lot on the line because you need to use these races to learn?
I want to learn and I want to get my bike better just so I can be in a better spot next year. And obviously I do want to get a podium and show some speed. Honestly the semi tonight was the best speed I’ve shown all year. I somewhat rode like Eli Tomac, somewhat.

The quad god.
But the quad god got me in the main.

But in the semi that’s where you got passed, right?
Yes, and I got passed by the quad god!

Is that why you wanted to jump in the pain after that?
I was like, if I want to win this main I’m going to have to do this thing.

Had you done it at all before the main?
No, I just had to rip it.

Well it worked for a couple laps.
It did. And the way it bit me just sucked.

So in the end you’re keeping your chin up. Obviously the season isn’t what you wanted, but you’re cool. You’re not super in the dumps about it?
No, I’m not. I can look forward to outdoors. I can look forward to trying to get on the podium. My bike is getting better; it’s not getting worse. I’ve been making improvements.

Yeah and what are you going to do? You get hurt on the first lap of the first race of the year…
Just blows everything out of the water, so it is what it is.

You were fast there in Anaheim, your times were top three and top five most of the day. In practice there you were good.
I was fast. I was okay.

So have you ever felt like you got back to that level that we saw at Anaheim 1 practice? Indy were you there? Or have we still not really gotten to see what you probably are capable of?
I don’t think you’ve seen what I’m capable of, but, I think a lot of things would have shown up those first couple rounds even if I was healthy. I would have been kind of struggling with some of the same things I struggled with once I came back, too. It’s just been a whole learning curve.