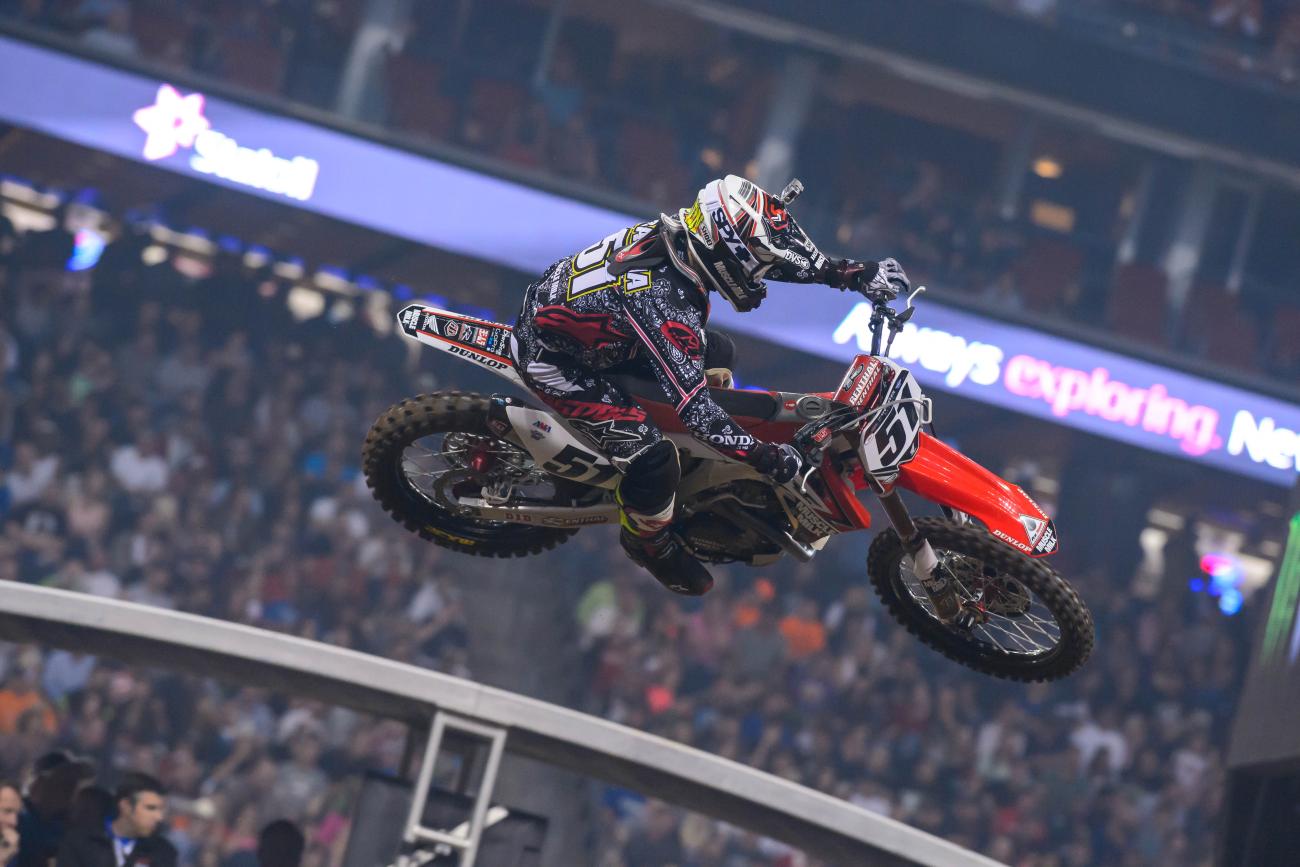 The Houston track drew mixed reviews. The dirt is generally really good, but there are hard spots beneath the tacky stuff, so it was deceptively slippery, tacky and rutted in different areas. In the spots where it’s good, though, it’s arguably the best dirt on the schedule.

As for the track layout, it was either too hard or just challenging depending on whom you talked to. The whoops were spaced out exceptionally far apart, which increased the odds of missing one and endoing. We heard the idea was that the soft dirt was going to break down, and the distance would make it easier to jump through the whoops safely once they got too difficult to skim. That worked well later in the main events but it was tough in practice.

Monster Energy/Pro Circuit Kawasaki's Dean Wilson is good to go for Seattle following a crash in Houston. He posted the following on Instagram: "Doc says we will be good for Seattle!! Just a small 2nd degree shoulder seperation from my little whoop crash in my heat race. Glad it's not to bad! Let's go racing!"

Houston saw a plethora of 250SX East Region riders either returning or starting anew in 450SX with varying results. Cole Thompson was back on the 350, filling in for the injured Ivan Tedesco, but his night was short lived. Thompson went down in his semi and caught his knee wrong. He will undergo an MRI this week.  “Unfortunately going into turn one I washed out and caught my knee wrong ending my night,” said Thompson in a team statement. “I go for an MRI this week and hopefully all goes well so I can finish out the East Coast 250 Series." If you’re keeping track, Thompson is the replacement for Tedesco who is the replacement for Davi Millsaps. Yikes! We will continue to update this story as more information becomes available.

Speaking of Millsaps, we asked Rockstar Energy KTM team manager Dave Gowland about his status. Davi’s been riding for about three weeks but he has not been on an outdoor track. If Davi wants to try one of these final supercrosses, he’s welcome to, but it’s his option. Most likely he’ll return to racing for the Lucas Oil Pro Motocross Championship.

Gannon Audette made his 450SX debut in Houston. Audette made the night show, but failed to qualify. Did we mention he was on a 250? Well, he was. Good effort from Audette. Doing similar duty was Daniel Herrlein, who raced a 250 to sixth in the 450 LCQ.

Factory Metal Works/Club MX’s Vince Friese was back in 450SX. Friese, currently fifth in 250SX East Region points, made his seventh 450 main in Houston, but got caught up in the huge Peick/Dungey/Grant crash, which ended his night. He would finish 22nd.

Everyone loves ‘em some Jimmy D! So here’s your update: Riverside Harley Davidson’s Jimmy Decotis also returned to the 450, making his third main in the class. Decotis was strong in the main, finishing a season high 15th.

With the Amsoil Arenacross Championship in the books, Houston also played home to some of the stars of AX. Kyle Regal and Gared Steinke both qualified for the 450SX night show, but only Regal made the main. He would finish 18th after experiencing bike problems.

Waiting for your weekly Soaring Eagle RCH Suzuki post-race PR quote of the week? This one comes in the form of a question for this upcoming weekend: “So how does a Soaring Eagle fare in Seahawk territory?”

There wasn’t much battling going on in the 450 class on Saturday night, except for one hard effort by two privateers down the stretch. Moto Mafia’s Nick Wey was digging to the end to try to catch N-Fab/Testa Motorsports Chris Blose for the all-important top ten. Blose held him off for tenth, his best finish of the year. Wey’s 11th ties his best finish.

Seven: Number of podiums Ken Roczen has made in his rookie 450SX season. Houston marked the first podium for Roczen since a second in Daytona.

When we spoke with the Privateer Journey’s Nick Schmidt following St. Louis, he explained he is no longer just happy to get into the mains, “his goal was top 12”. Schmidt was close to reaching his goal in Houston as he finished a season high 13th. Schmidt has now made seven mains in a row and ten on the season.

Right behind that mark, DirtCandy Graphics’ Ronnie Stewart kept his streak alive with his sixth-straight 450SX main event. Before this streak, Stewart had never qualified.

Cody Gilmore has also found his stride as of late. The Team Gus privateer has made five of the last six mains and finished a season high 14th in Houston.

A Night of Firsts: Privateers Cheyenne Harmon and Mark Weishaar both made their first mains of the 250SX West Region in Houston. Harmon finished 20th, with Weishaar two spots behind in 22nd.

SmarTop MotoConcepts’ Colton Aeck finished 21st after securing a spot in the main following a last corner crash in the LCQ. This was Aeck’s first main made since Phoenix.

Strikt Slaton Yamaha’s Zach Freeberg had his best finish of the season in Houston with an 11th.