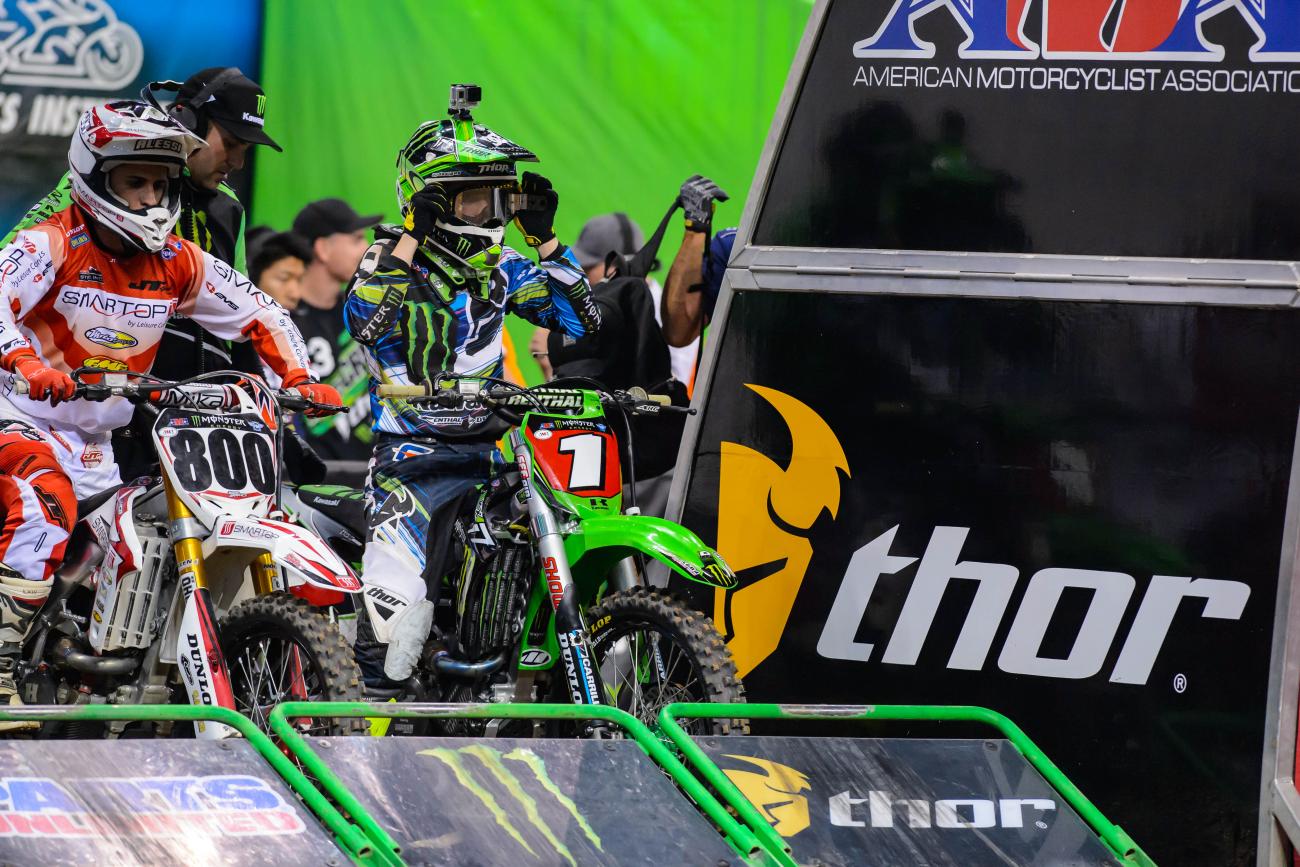 Breakdown Thinking Outside the Box

Ryan Villopoto won his fourth race of the season on Saturday. It was a great ride by the three-time reigning champion, and besides Daytona, it may have been his most impressive 20 laps to date. Winning races is nothing new but a crash while leading his heat race relegated him to the Semi, and that’s definitely unfamiliar territory. He had a challenge in the Semi from Eli Tomac but he busted out the quad and made a late pass to get the win. Still, that gave him the ninth spot for his main event gate pick. Normally, RV finds himself in the top couple of picks and this gives him the benefit of not only an optimal position for the first turn but ensures that his exit rut is ideal. With the ninth pick he would be forced to react to everyone else’s picks instead of having his first choice.

The interesting thing here for me is that typically Ryan will choose to go way inside for many starts—sometimes all the way to the extreme inside. He feels it’s safer because no one can run him wide and off the track. If he gets a good jump he can control the inside, and if he doesn’t get a good jump he can tuck inside of everyone and squirt past people. It’s not a new concept, but many people don’t agree with the tactic—you don’t see many other riders select the very inside gate with the first gate pick.

On this night, Ryan was forced outside of his preferred area, making him less comfortable and opened him up to the possibility of being pushed into the outside bales and thus into the Houston terrafirma. As they lined up, I noticed that he was right next to his archrival, Mike Alessi. Many know that Mike has a completely opposite approach to gate selection than Villopoto. He often chooses to go towards the middle or even outside, most often in the first gate outside of the dog house. He’s confident in his ability to beat everyone to the turn, and he can brake much later since he’s coming from the outside. From the outside, his turn angle is much broader so his speed can be much higher while still controlling the crowd to his inside. Mike pulls holeshots like this time and time again, both indoors and out. When I saw RV and Alessi lined up next to each other, both on the outside of the starting box, my eyes were glued to this pairing. Alessi surely wasn’t happy about having RV next to him in his coveted spot next to the box and RV surely was conscious that the best starter in the history of the sport was next to him as well.

As the gate dropped, everyone was fairly even until about three-quarters of the way down when the group from the inside had to apply the brakes. At that moment, the unlikely outside duo of Alessi and RV were still on the throttle and blew past everyone to fight each other for that $1500 holeshot award. Villopoto was on the inside of Alessi so he nipped Mike to the chalk line, but both of them were in great position after less than ideal starting gate choices. The riders on the inside, which included both heat race winners, fared less spectacularly. Both James Stewart and Josh Hill chose to go to the hard inside and while Stewart came out inside the top ten or so, Hill ended up clipping one of the Tuff Blocks and going down.

Ryan Villopoto won the race because he was the fastest rider on Saturday. I have no doubt of that. It’s still great food for thought to think about what could have changed had he won his heat race and chosen an inside gate as he usually does. Would he have crashed with Hill? Would he have been a bit further back and gotten collected in the Dungey/Peick/Grant carnage? Would a bad start have allowed Barcia to build up an insurmountable lead? All of these scenarios are highly possible but with his heat race crash and the chain reaction that led him to be on the outside, he avoided all of those issues. Ryan took a less than ideal situation and turned it into an advantage.

Championships are full of these little nuances and varying scenarios. Riders who handle them with the most poise and can overcome the unpredictable adversity of supercross are easy to identify when the series wraps up in Las Vegas. It is this ability to adapt and persevere when things go sideways, just as they did for RV on Saturday night, which shines the spotlight on a champion.