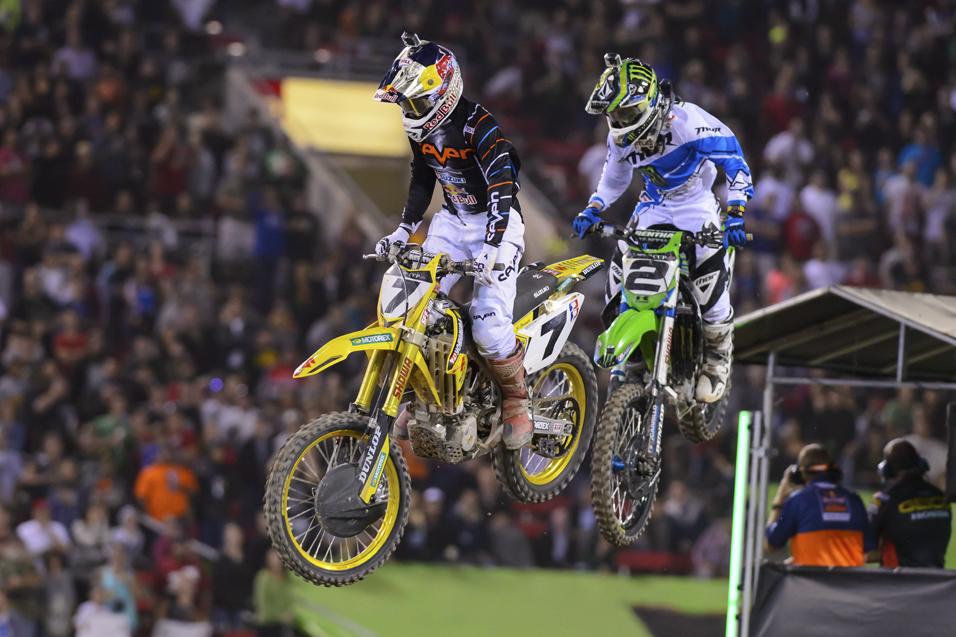 The Moment Stewart and Villopoto Duel

There were plenty of moments on Saturday night at the wild and spectacular Monster Energy Cup, some good, some bad and some downright ugly. Crashes like the spectacular get-offs of Monster Energy Kawasaki's Ryan Villopoto and young TLD Amateur All-Star contender Justin Hoeft were surely among the ugly, and the momentous mistakes by first Ryan Dungey and then Villopoto in missing the Joker Lane were as bad as they were dramatic. But the moment of the night came in the second moto, as Villopoto was frantically trying to get around a resurgent James Stewart and his low-flying Yoshimura Suzuki. When the two of them hit the big triples in front on the press box side of the stadium, both whipped out flat and practically staring at each other, you were seeing vintage James Stewart in action. Here was the guy we only saw glimpses of in 2013, and '12 for that matter, and even further back… It was as if he was in a supercross time machine, turning back the clock as he faced the new fastest man on the planet, signaling to the reigning three-time Monster Energy Supercross Champion that he was not about to roll over. The crowd collectively roared, some probably missing the third man at that point—Muscle Milk Honda's Justin Barcia—was also whipped, and right behind this battle. When Stewart and Villopoto landed, it was on, and the back-and-forth that followed was a race we've all waited to see between Stewart and Villopoto for some time now. To the credit of both, neither man backed off. And the shock that would follow on the last lap—Stewart making the turn for Joker's Lane while Villopoto inexplicably went by, doing the exact opposite of what he did on the last lap of the first main moto—was just surreal. 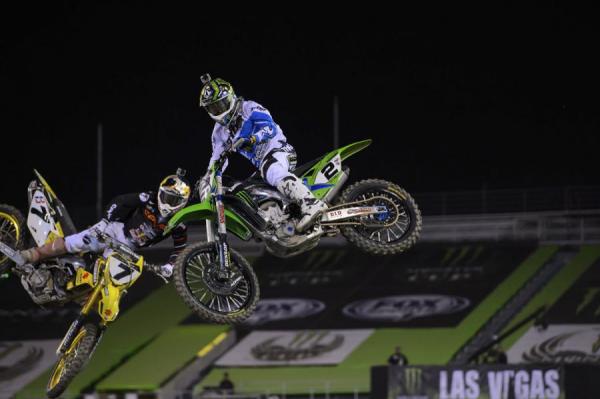 The Moment of the race, and the evening at the Monster Energy Cup.
Simon Cudby photo

James Stewart is not the same rider he was just a few years ago, the toll of big crashes, up-and-down seasons and the rising tide of younger heroes like Villopoto, Dungey, Barcia, and the almost-there Ken Roczen (who was solid all night long) and Eli Tomac having brought him to the twilight of his career. But it's now obvious to all that Stewart is not ready to go into that sunset gently. On Saturday night he fought back hard, in a race that was more about pride than points or dollars or anything else. The moment he went flat alongside RV, then knifed back underneath him to snatch the lead back, he showed that he's ready for more.

Admit it: you were more surprised with James Stewart's wins in those last two races than you were with his eighth-place finish in the opener. Judging by the wide grin on his face afterwards, as he once again stood atop the podium, it was obvious that he liked being back in the familiar surroundings of the winner's circle.