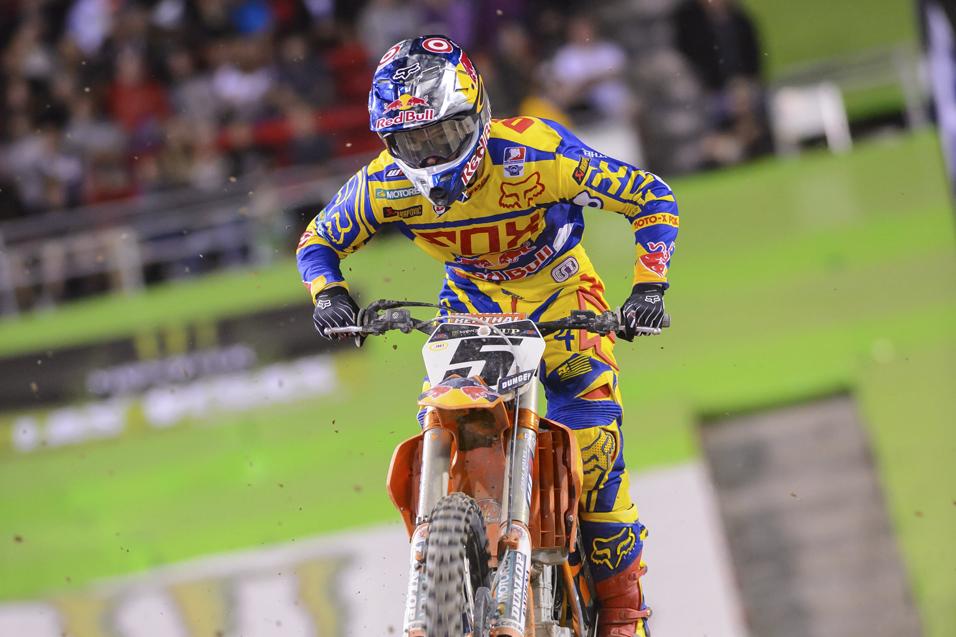 Advertisement | Advertise with Us
The 2013 edition of the Monster Energy Cup has come and gone. After nearly two months away from the American racing circuits, it was great for most everyone to convene back in Las Vegas for a truly unique event. With the three-moto format, split start, Joker Lane and very fast track design (minus whoops), this race offers different aspects of racing than we see during the standard supercross season. While some may not particularly like each individual variation, I think it is a good idea to break up the format and infuse strategy into the riders’ minds. Supercross, in my opinion, has become slightly stale in its current format and while there are changes coming for 2014, the MEC really shakes things up for everyone and usually that is reflected in the results and overall feel from the racing.

Author Leo Buscaglia once said, “Change is the result of all true learning.” I think is the very essence of what we see going on with the MEC. Changing the format adds so many unexpected wrinkles to the racing. Riders have become so robotic and programmed to the current format that altering the script can bring in many aspects—such as adaptability—that haven’t been a priority. The elite riders ride practice, ride their eight-lap heat race and then are programmed to do 20 laps. They do it literally hundreds of times in the off-season, day in and day out. They have programs built on consistency and repetition so that race day will just seem like another day of training. A race like MEC throws a wrench into that and I would like to see more of it. Make the riders adapt and think on the fly. Add in different obstacles we aren’t accustomed to, change the format. More variables, more excitement and more unpredictability will keep everyone guessing and that, in my opinion, is a good change. 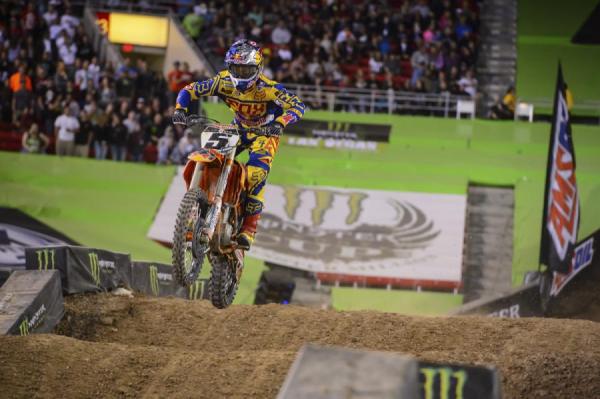 Ryan Dungey had to use strategy in the third main. It nearly paid off and is something JT feels would add excitement to the supercross series.
Simon Cudby photo

An interesting aspect of the race this weekend was Ryan Dungey’s strategy in moto three. After his first moto gaffe, Dungey needed to win the moto to win the overall. There were four riders (Dungey, Ken Roczen, James Stewart and Justin Barcia) basically going for the win before that last moto, and soon Barcia had troubles, leaving it to Stewart, Dungey and Roczen. Kenny had grabbed the lead with JS7 and Ryan in tow. With 10 laps total and each rider needing to take the Joker Lane, everyone was wondering what strategy would work best. For James and Roczen, it was fairly straight forward as they were battling for the lead. For Dungey, it was a bit different as he had to pass both of them, and that’s typically a tall order for Ryan. As great of a champion as he is, passing seems to often be his Achilles heel. Some say he is too nice while others just say it’s a weak point in his craft, but there is no denying that he has gotten stuck behind riders at inopportune times.

Seeing Ryan behind both of these riders with only 10 laps to work with, I wasn’t very optimistic about his chances at victory. As the laps went, James closed in on K-Roc and was bobbing and weaving, looking for a way around. James had dropped his lap times while Roczen had slowed slightly. Dungey was matching them both, but matching times isn’t going to get a pass made on anyone. Then Dungey ducked into the Joker Lane at the halfway mark. Few riders had chosen to take it that early, and I think he made this early move for a few different reasons. First, he knew that passing both riders would be tough for anyone, let alone someone who has had troubles at this before. Also, I think he was hoping they would get into a battle, much like James and Ryan Villopoto had in moto two. Battling like that slows lap times. If that indeed happened and Dungey could keep his lap times consistent while running in “clean air”, he could come out on top. Enter the Joker Lane. When Ryan felt the brewing Roczen/Stewart battle would slow the pace, he went to the Joker Lane that lap. From there, if Ryan could hit his marks and put in good enough laps, he would be close enough to grab the lead when James went for the Joker Lane on the last lap. Looking at the lap times, it almost worked! 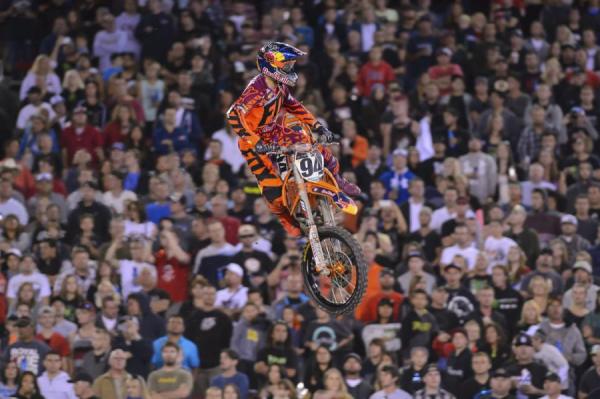 The Joker Lane cost Ken Roczen in the final main, as he lost two spots on the last lap.
Simon Cudby photo

As you can see below, just as Roczen started to drop his times (partly because of the battle with James), Dungey went Joker. Doing the math, the gap at that point between Stewart and Dungey (with Roczen in between) was 2.29 seconds. Dungey was faced with having to gain 2.29 seconds and then pass both riders. Not easy. By taking the Joker Lane, if his times were fast enough, he could not only forego making a pass but also have a clear track to make up the 2.29 seconds. Even though it didn’t pan out, it was brilliant in theory. He was able to chop off 1.59 seconds and when James came back onto the main lane, Dungey was all over him! He was also able to make the pass on Roczen without getting slowed in a battle, and Dungey made up 2.8 seconds on Roczen over the course of those five laps. Of course, this all played out very quickly and everyone was caught up in the heat of the moment watching the race. When I went back and broke it down, I really like the thought process here. Dungey didn’t have the start, so he tried to win the race by staying out of the battle and focusing on pure speed and lap times. Had it worked, it would have been one of the smarter moves in recent history resulting in a $100,000 payday. Even though he came up a bit short, Dungey showed the ability to play out scenarios beforehand and really think beyond the standard methods of racing.

I realize that this move didn’t change the winner and is a bit in depth. It does, however, make my point as to the variables of change. Changing the format can also change many other aspects of how riders approach their race craft. I’d love to see the riders and teams actually strategize and adapt more often. Plus, there was significant drama on that final lap, knowing Stewart had a gap but also had to use the Joker Lane, while Dungey had already cleared it. In fact, all three motos carried drama into the final lap due to the Joker Lane strategy. Hopefully the unpredictable nature and wild racing we saw on Saturday will be the catalyst we need to make more changes in today’s racing landscape.