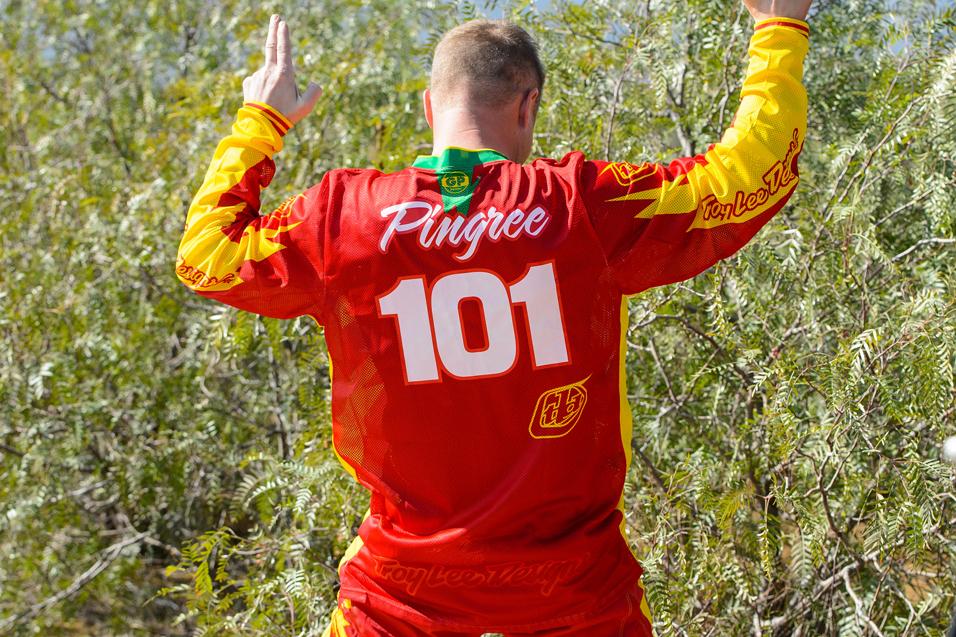 I’m sitting here watching the live coverage of LL’s (awesome) and a lot of the amateurs are tossing their goggles. My question is, do any pro riders or top amateurs wear glasses or contacts? If so, isn't that a huge disadvantage? Possibly losing a contact on the gate or in the middle of a race could escalate quickly. Thanks for your insight.

There are definitely some disadvantages to requiring contacts or glasses as it pertains to racing motorcycles. Not being able to see is a huge disadvantage, as you can imagine. I know some guys use prescription lenses in their goggles and that eliminates the need for glasses or contact lenses, however, I imagine those guys would be hanging on to those goggles tightly. They are super-expensive and if you throw away prescription goggles because they are muddy and you can’t see, you haven’t really helped your situation, have you? Tossing your goggles is an amateur move, which would make sense at Loretta’s. You are almost always better off [and always safer] trying to wipe your lens or stop for new goggles.

I have an interesting theory about Chad Reed. Have you noticed that his two worst seasons ('10 and '13) have been the ones where he's sponsored by Monster? They've gone the same way; mediocre Supercross, then a mysterious illness in MX. Is he allergic to the stuff, is it a coincidence, a conspiracy? What do you think?

Great job on the theorizing. The problem is that I don’t think Chad Reed consumes an abundance of any energy drink, so the Monster thing is just coincidence. However, I think Chad might have a rare allergy to large bank account sums and I want to step in here and do the right thing. So, just this once, I am willing to accept a large cash donation so Chad can feel better. You are welcome, Reedy. Get well soon.

You are a master of all that is insider and are a single-handed TMZ/Dear Abby/Dr. Drew for the moto world, all wrapped in one.  Now my letter.

As a more mature viewer of racing, which means that I get prostate exams once a year now, and have chosen my doctor accordingly- I am getting fed up with all the letters from people moaning like Rocky after an Apollo Creed beat down about the current TV schedules and coverage of SX/MX.  Now, I understand that is 2013 and kids are used to eating McDonalds every day instead of every month, but seriously?!

I remember having to distill my own gas and wrestle a dinosaur for his oil just so I could get some fuel to ride. I also remember catching 3 minutes of highlights between segments of gymnastics (it was even the dudes-not the chicks), golf, some track and field and then a feel good story about Joe Namath before two minutes of commercials and a showing of the podium from the race.  At least in those days the winners were slapping trophy girls on the ass and slugging an Oly instead of robot reading their "thank list"- PS no one give's a sh!# about your trainer.

It's all too easy these days, even for a washed up "back in the day" jerk like me.  I have learned to set a DVR, I can search for stuff, and even set it to record.  What really baffles my wife is that I can find it later and actually watch it.  Listening to all these kids who "never wore construction boots to moto" cry-babies is ridiculous.  Shut up! They teach you this technology crap in school now. Pay attention.

PS - While I am being entirely offensive and grumpy, WMX.  Really?  Ladies, even the girls who couldn't qualify for a heat race would lap me in a one lap race, so respect to your skills BUT - there's reason you are not getting a full season, and not getting TV and not being courted by the factory teams and it's that your product is not as good as the Pro men. If women were equal to man in every way we would not have to suffer through WNBA on ESPN (time which could be filled with moto) and you would be on men's teams. No offense, but sports is now a business. If your product is not in demand, no one will pay for it. What's next? Why should something be subsidized to survive if very few want to see it. Please send all my hate mail to the Alessi's. Goodnight.

Keeping it real. Real Old that is.

In one succinct letter you’ve managed to offend the vast majority of the motocross community, women, the Alessis, the WNBA, over-indulged children, Joe Namath and several other stick-and-ball sports. Do you realize this? Do you?

Well, I do and I’d like to be the first to say.. Well done! While I don’t have a proctologist selected just yet to give me the ole’ annual finger wave, I’m willing to look past the age difference because I think you and I would get along just fine. Keep on keeping it real.