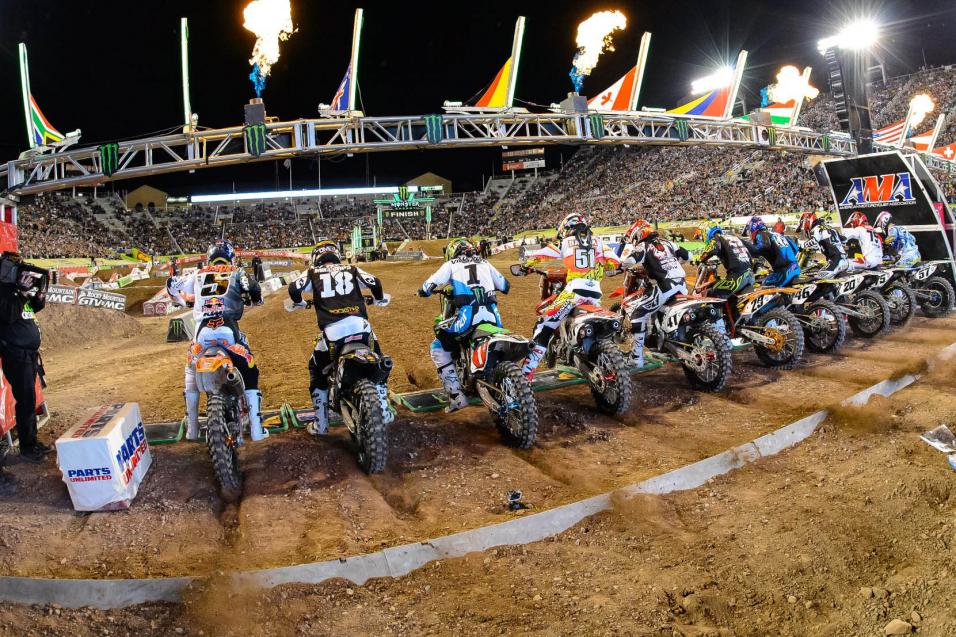 Pressure was the name of the game in Salt Lake City’s next-to-last round of Monster Energy Supercross. From championship scenarios wreaking havoc on the younger set in the 250 class, to steely-eyed determination by veterans who left it all out there in the 450 division, there was tension in the air all night long, and that led to a spectacular set of races.

In the 450s, Rockstar Energy Racing’s Davi Millsaps and Red Bull KTM’s Ryan Dungey knew they had to beat Monster Energy Kawasaki’s Ryan Villopoto if they wanted to keep their title hopes alive, and they gave it all they had. Villopoto looked vulnerable at times, as Millsaps railed to the fastest times in both practices and then caught, passed and beat Villopoto straight up in their heat race. Then in the main event, Dungey tucked inside and grabbed the holeshot. The champ was on the ropes, but swung back decisively with a block pass on Dungey to take the lead.

Millsaps was quickly up to third, and his speed in the whoops was impressive. He passed Dungey and then went to work on Villopoto like he had in the heat race, charging and charging and charging, getting a 2.4 second gap down to about 1.5. Mistakes by all three all leaders allowed that gap to fluctuate, as they were absolutely pinned all the way around the track.

Behind them, the Honda Muscle Milk duo of Trey Canard and Justin Barcia rode solidly inside the top five, but they weren’t able to match the pace of the title contenders ahead. 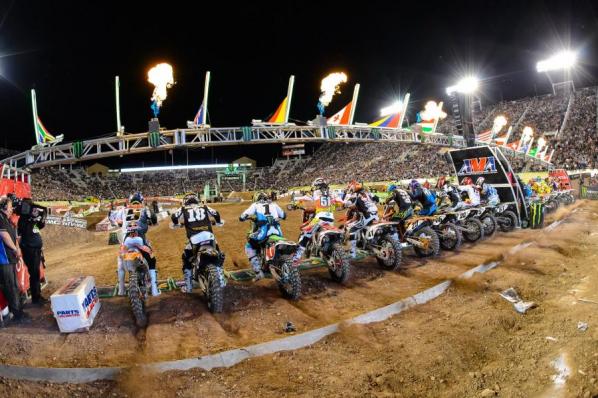 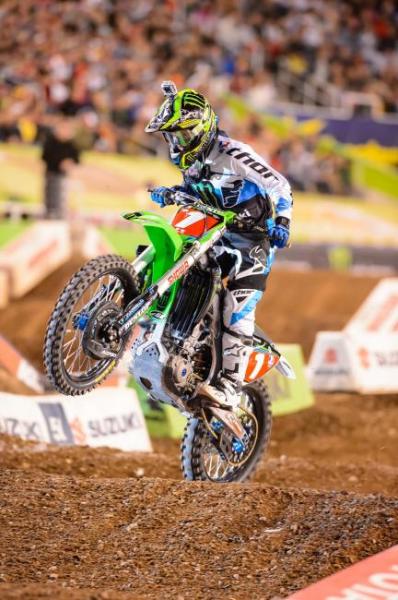 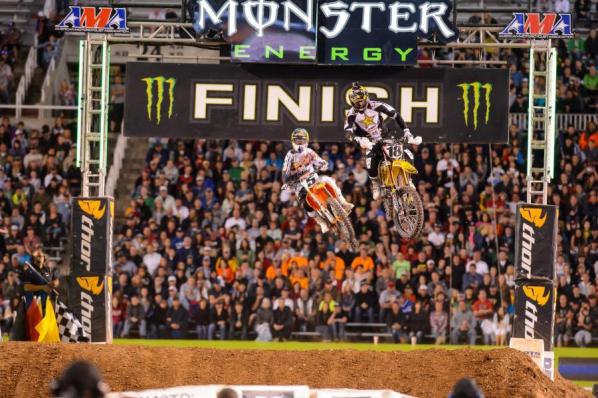 The top three absolutely pushed to the limit. 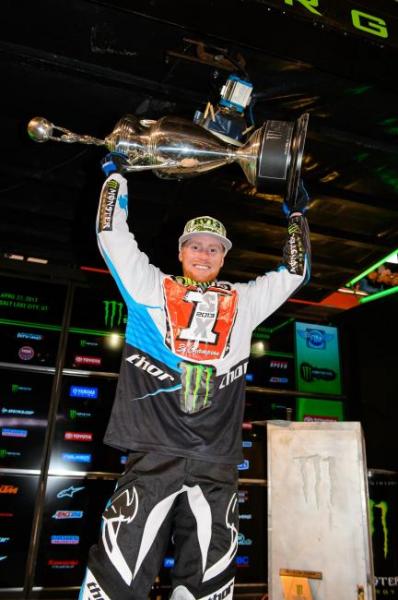 Ultimately, Millsaps got up to Villopoto’s rear tire once during a desperate drive through the whoops, and he got right inside the Kawasaki ride as they sailed over the finish line jump. Villopoto fought him off and found something extra, getting just a little bit of gap back. The champion seemed to be a little quicker in some corners, and he picked up his speed just slightly in the whoops to fend of Millsaps’ attacks through there. It was close, but in the end Villopoto seized a clutch victory, and with that enough points to clinch the 2013 Monster Energy Supercross Championship, his third-straight. Only three other riders, Bob Hannah, Jeremy McGrath and Ricky Carmichael, have won three-straight SX crowns.

Millsaps and Dungey finished second and third, leaving it all out there. All three podium riders admitted their heart rates were maxed out, and Millsaps said he had nothing left at the checkered flag—they had all truly given it everything they had.

You’re probably not even going to believe what happened in the 250 SX class tonight from Salt Lake City. We’ll write it out, but it’s up to you to digest it.

The 250 West SX points leader, Red Bull KTM’s Ken Roczen, went down in the first turn of his heat race, then had a few more bobbles trying to come through the pack, and decided to pull off the track and head to the pits. It was a curious choice that resulted in a poor gate pick in the LCQ, and the racing Gods responded with the requisite LCQ first turn crash. Roczen got caught in it, and his work was cut out for him. He quickly moved through the traffic, but the four-lap race doesn’t allow much time to catch up, and he ended up third, missing the main. It was a shocking scenario that put wind back in the championship sails of GEICO Honda’s Eli Tomac for the main. 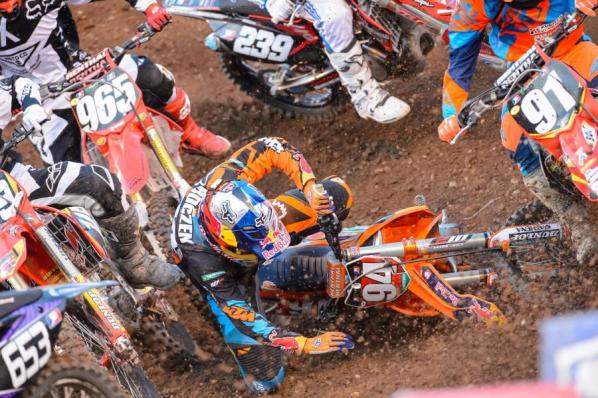 Things got crazy for Roczen. 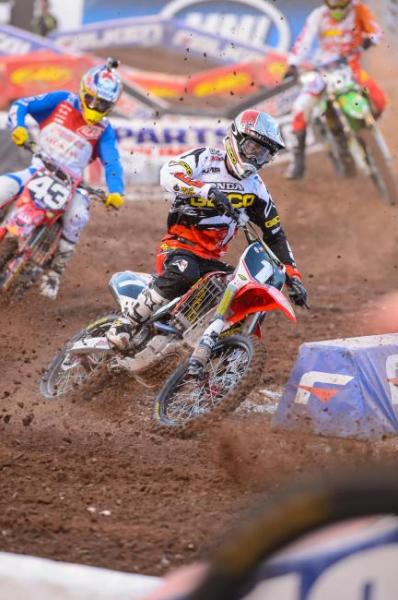 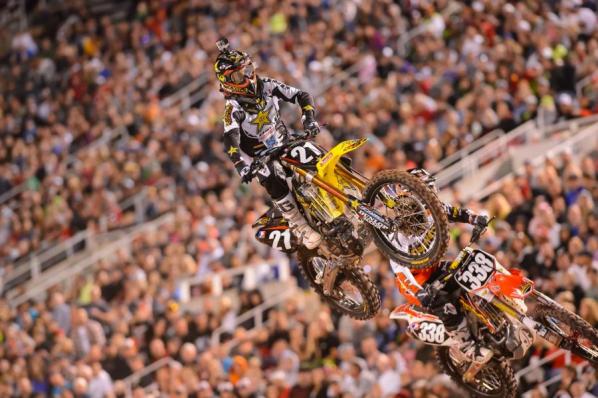 Anderson (21) got around Osborne and took off for his first career win. 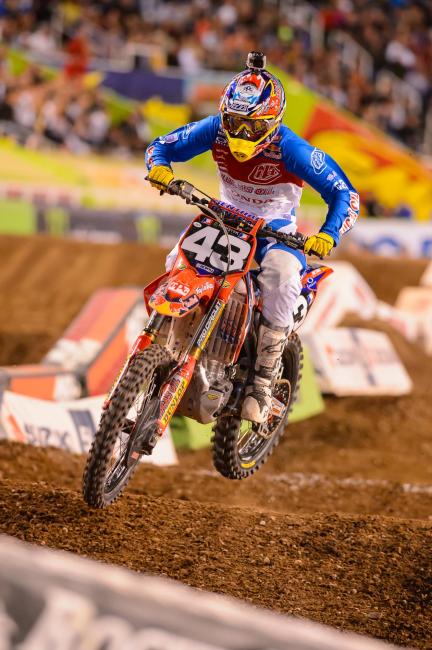 But Tomac didn’t seem himself in SLC, carding only tenth in practice, and going down off the start in his heat. In the main, GEICO Honda’s Zach Osborne got the holeshot and Tomac was second, but Jason Anderson quickly passed them both to take off with the lead. The Rockstar Energy Racing-backed Anderson logged solid laps while leading, while Tomac started struggling, especially in the whoops, and started dropping multiple positions. At one point, he was clinging to the top ten, points falling through his fingers.

Anderson’s closest competition came from Lucas Oil Troy Lee Honda’s Cole Seely, who was on the gas in second. Eventually, Anderson drew away from Seely, while Monster Energy Pro Circuit Kawasaki’s Martin Davalos moved into third. They finished in that order, with Anderson notching his first career win.

As for Tomac, the whoops were leading to his undoing, but late in the race he was able to salvage something, passing a few riders back and getting into seventh. Then Osborne crashed in the whoops and threw it away, putting Tomac in sixth. He made up some ground on Roczen, but not as much as he would have wanted.  After the race, Tomac simply said he was struggling, and didn't make any excusese. Roczen, similarly, took it on the chin, admitting that he shouldn't have pulled out of the heat race, because it gave him a bad gate pick. Roczen holds a five-point lead heading into next weekend’s Vegas finale.