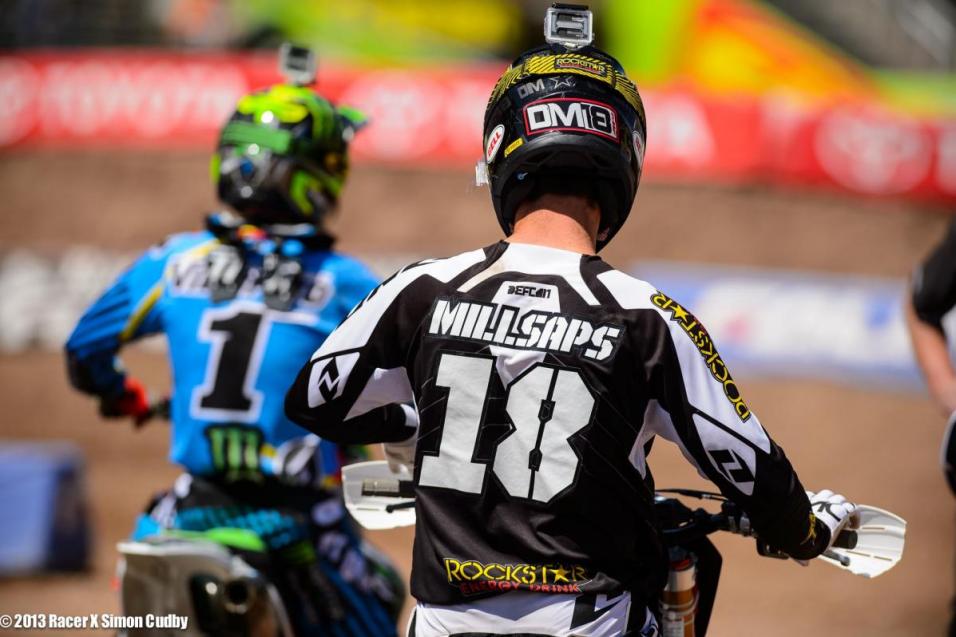 te here at Monster Energy Supercross from Salt Lake City, and the two riders hoping to stave off Ryan Villopoto’s championship celebration have stated their case. Davi Millsaps topped both 450 SX sessions on his Rockstar Energy Racing Suzuki and Ryan Dungey was second overall on his Red Bull KTM, and both need to finish ahead of Ryan Villopoto tonight to keep their championship hopes alive heading into next weekend’s Las Vegas SX finale.

Millsaps was especially strong, setting times on the top of the board early in each session. The whoops are especially tough here in Salt Lake City, and DM18 ate them up. Davi usually seems to do well at this race, and battled Dungey for the win last year. But that was the 2012 Millsaps, who was good en route to second in the season standings, but wasn’t able to seal the deal on a win. This year, Millsaps has been even stronger and has two race victories to his name. Clearly, he has what it takes to get it done and win tonight’s race.

Dungey is certainly motivated, too, and while gnarly whoop sections have not been the forte of the Dungey/KTM combo the last two seasons, he had no troubles in the deep set so far today. As for Monster Energy Kawasaki’s Villopoto, he had a few small crashes throughout the day, but overall rode well. It’s going to be a battle tonight.

Don’t forget the Honda men, like last week’s winner Justin Barcia and his teammate Trey Canard. Canard looked quite relaxed and creative out there today. Give either rider a start, and they’ll be in the mix. JGR Yamaha’s Justin Brayton was also very fast in the first session, second in times behind Millsaps. He seemed especially strong in the whoops again, but the whoops weren’t quite as tough in session two, and Brayton ended up seventh in that session. 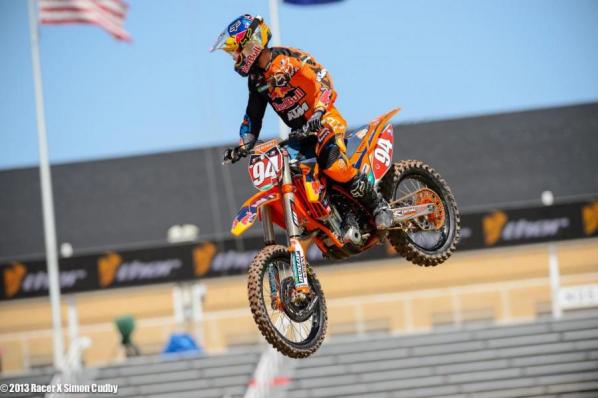 Ken Roczen is doing the right things to try to win the 250 West Title.
Cudby photo

Ken Roczen also has a shot at sealing a title tonight on his Red Bull KTM, and he was fastest in practice. Eli Tomac has won both times he has raced here and needs to beat Roczen to boost his chances of defending his West 250 Title. But Tomac wasn’t as blazing fast today as he normally is, ending up tenth fastest overall in the class. He’ll need to bounce back for the night show, or this title is going to Roczen.

Martin Davalos was fastest in the first session, and his time held up for second overall behind Roczen. But Davalos had a crash in session two that ended his session there early. He should be okay to race, but might be banged up. Jason Anderson, Zach Osborne and Ryan Sipes rounded out the top five in the 250s.