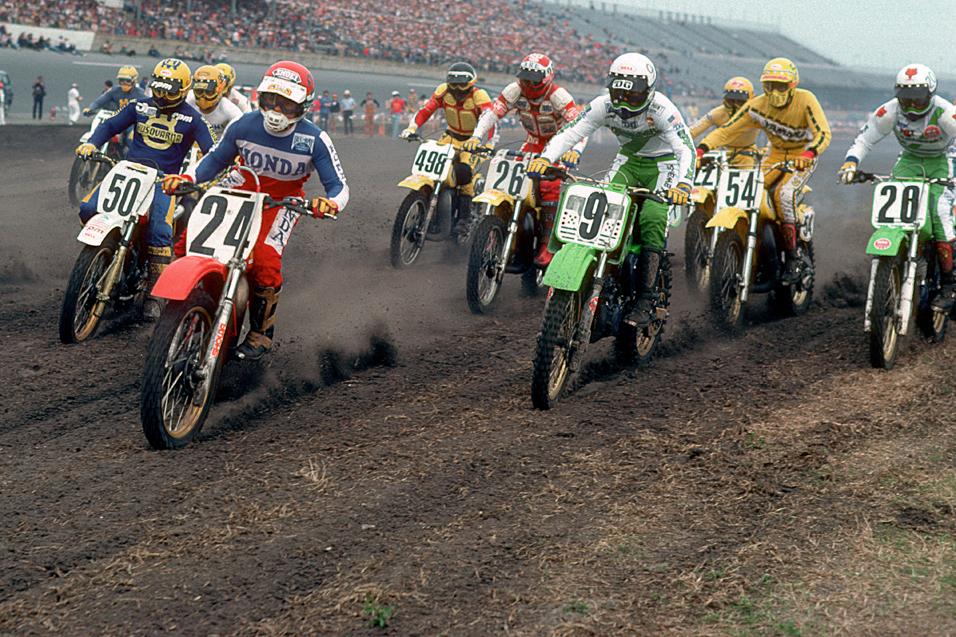 Going for the W Daytona Blueprint

March 9, 2013 6:00am
by: Steve Matthes
Daytona International Speedway Daytona, FL Daytona Monster Energy AMA Supercross Championship
In 1968, Major League Baseball went through a pitching revolution. Baseball historians will go on and on about the 1968 all-time high water mark for pitching. Hitters were so overmatched, the batting title was won with a .301 average and the average ERA (earned run average) for pitchers was an astounding 2.98 (nowadays it’s almost four). The next year, fearing fans would tire of 1-0 and 2-1 games, baseball lowered the pitching mound five inches. The difference was drastic; changing the angle that a person can throw a baseball, resulting in less velocity. That changed everything. Hitters caught up, ERAs went up, and scoring returned. Baseball historians almost always have to quantify pre-’69 and post-’69 when comparing pitchers and their stats—because changing the mound changed the game.

And all of this brings us to this weekend, the annual visit to the historic Daytona International Speedway. The Daytona Supercross is the longest running supercross going, but its evolution is a little like that baseball mound. We have Daytona 1973-2003 and then we have 2004 to the present. Before 2004 the race was held in the middle of the day, it was hot, rough as balls and the track was long. It also featured 30-man main events compared to the usual twenty. The race was tough, it was unlike any other supercross out there and it severely tested the racers. Basically, it was a Motocross National in the middle of the supercross schedule. 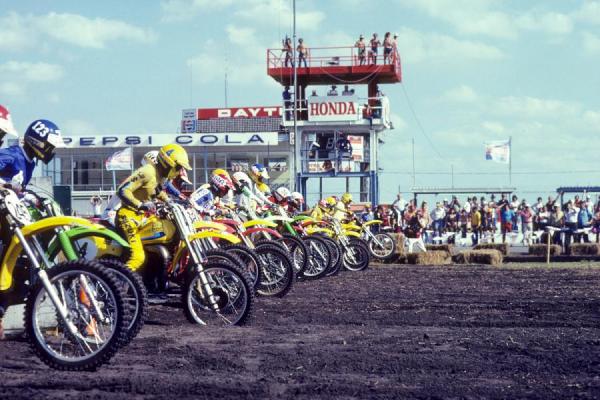 I remember as a mechanic the top guys would be lapping back-markers three to four laps into the main. Teams would routinely stay down in Florida before the race to develop a “Daytona set-up.” The square edges and braking bumps required motocross suspension and chassis set-up, but the angle and size of the jumps required that there still be some supercross in there.

However nowadays, the race is much more like a typical supercross. It’s run under the lights to make it more bearable, there are just 20 men in the main and the track is built to much more normal supercross specs.  Simply put, this ain’t your grandpa’s Daytona anymore.

Former 125SX winner (1995) and multi-time 450 podium finisher Tim Ferry has raced Daytona in both eras. His first time on the green grass was 1992, his last time at the speedway was 2009 and for the Floridian, he’s happier with what he sees nowadays.

I remember my wrenching days (including time with Ferry) and the time before Daytona was always a massive undertaking. Suspension valving, linkage pull-rods, triple clamps, you name it and we would test it to try and make the bike work better in the rough stuff that was Daytona. However, Ferry says that’s not needed now. 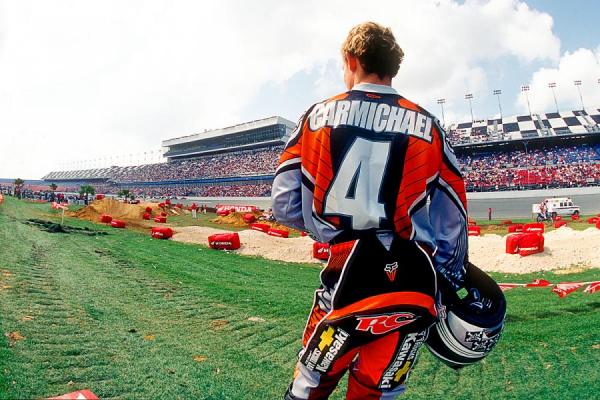 RC checking out the track in 2001.
Simon Cudby photo

“It’s more just a standard supercross now, it’s sandier in spots than normal but ever since Mark Barnett started building the track versus Gary Bailey it’s been way more standardized. (On this note, how in the heck did Mark “The Bomber” Barnett never win Daytona? The outdoor warrior never got it done despite being as fast and as gnarly as anyone in his time.) Before you would end up running a much softer than usual supercross stuff but now, when I raced it in the later years, I sometimes didn’t even make a clicker change in the suspension from my usual supercross setting. There’s an advantage to knowing what you've been riding with and being used to it. Even the start now, they lay clay down so it’s always perfect.

“It was tough back in the day, it was rough and hot and what you would end up with is a little quicker rebound and a little softer on compression. That was when it was big sand whoops with ruts that are brutal-they were so deep! The lap time is now just under a minute compared to a minute and a half (before), which was almost a 30-minute moto. Now, it’s not as physically tiring as before.”

The endless days of testing beforehand are gone, so what do riders do to prepare for this weekend’s race? Some riders like Chad Reed will get on the dozer and prep a section alongside their supercross track to try and mimic a Daytona track. Most of the time it consists of getting the tractor and digging some holes to create some breaking bumps and rough sand whoops. The riders will do a lap on the normal supercross track and then veer off into the “Daytona section” for some extra practice.

Ferry sees this as beneficial. “If you ask me, that's more of a benefit than messing with bike set-up,” he says. “Dig into the sand and create chuck holes and make some crappy sand whoop sections because that's what it’s going to be at the race.”

The days of Mike Kiedrowski winning Daytona three times in a row (the MX Kied only has five career indoor wins and three of them are at Daytona) because he was so much better at motocross or Jeff Stanton dominating using his outdoor skills and fitness are over.  This Daytona, for good or bad, is vastly different than it used to be. 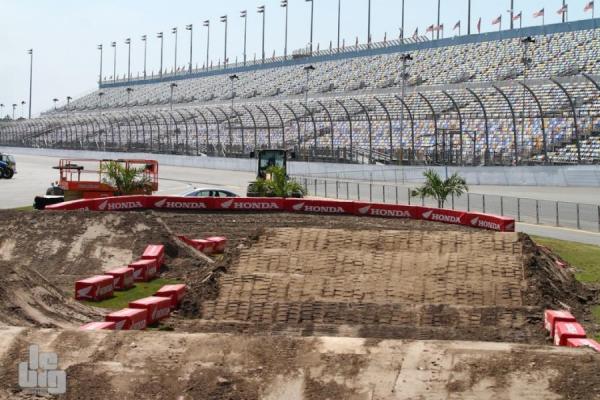 “It’s just another supercross now, you end up chasing your tail if you change your bike settings too much,” says Ferry. “Now when you go there, it ends up being one really good line around the track and they take really good care of it to make sure it doesn’t get too rough. There are still a few sports that get bad, mostly during the main, but it kind of becomes a one-lined track at one point because things wear out and you want to stay close to the ground.”

As far as a favorite for Ferry, despite him liking the “new” Daytona, his best racing memories are from the “old” Daytona.

“The time I won (1995) was pretty cool, I got a hay bale cover in my tire and (Michel) Pichon was gone. He was something like 20 to 30 seconds ahead but I ended up catching him and winning. The year before I had a great race with factory Suzuki riders Jimmy Button and Ezra Lusk. They were factory guys and I was on a privateer RRP Honda. I didn’t win but it was a cool race.”

So there you have it folks, whatever your opinion is of the changes that have happened to Daytona over the years, there’s no denying that it’s not the same as it used to be. Good or bad, what we’re dealing with now is as close to the other sixteen supercross races as it ever has been. Just remember that, when you’re bench racing with your buddies about Daytona and all that it has been in the past, sometimes change is good.