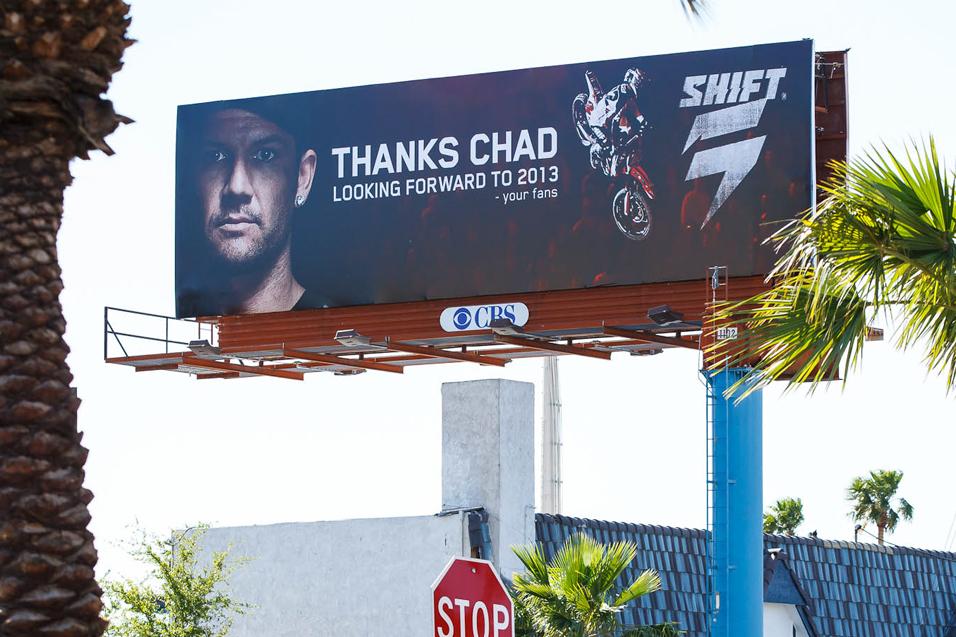 Supercross fans driving around the Los Angeles area the past couple of months were probably stoked to see giant billboards along the highways featuring Monster Energy Kawasaki's Ryan Villopoto. The massive signs were there to let the world know there were three races coming up at Anaheim’s Angel Stadium over the first five Saturdays of 2013. 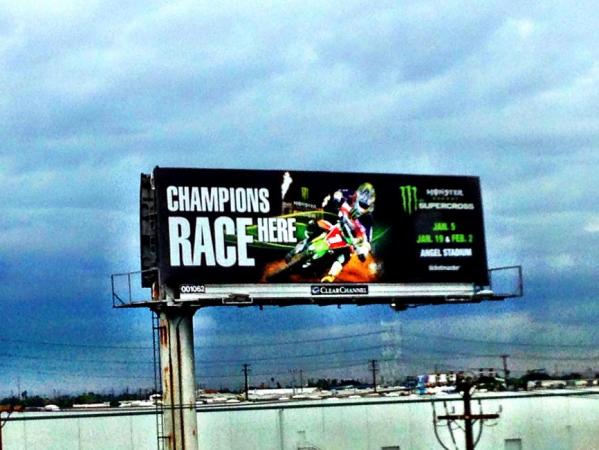 The signs got us to thinking about other moto-related billboards we've seen along the highways and byways of these United States. Probably the most famous—or certainly the most notorious—was the Oakley billboard that also went up in Southern California back in the late nineties featuring then-rising star Ricky Carmichael doing a massive whip at the 1997 St. Louis 125 Supercross. The billboard made for a unique cover for the old newspaper version of Racer X Illustrated, shot by Chris Hultner. 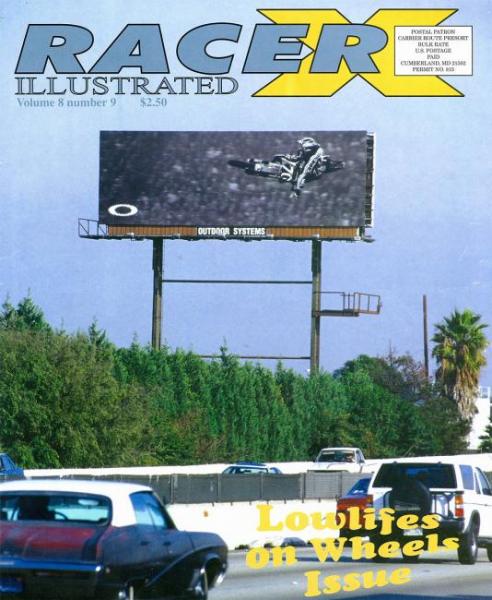 The problem with the billboard was the fact that it was shot by a part-time photographer who did not have a press pass for the event—he shot it from the stands. He later apparently handed the picture to Chad Watts, then Carmichael's mechanic at Splitfire/Pro Circuit Kawasaki, who in turn let Johnny O'Mara—RC's coach and an Oakley goggle man—take the photo back to work. From there it ended up on the billboard, and later a bunch of very cool (and now very rare) Oakley posters. When the photographer spotted his image on the billboard and posters, he wanted a sizable royalty, even though he apparently wasn't allowed to sell images from the event he’d attended, as printed on the back of every SX event ticket back then.... Lawyers got involved and it was downhill from there for everyone but Ricky. He just kept winning and winning and winning. 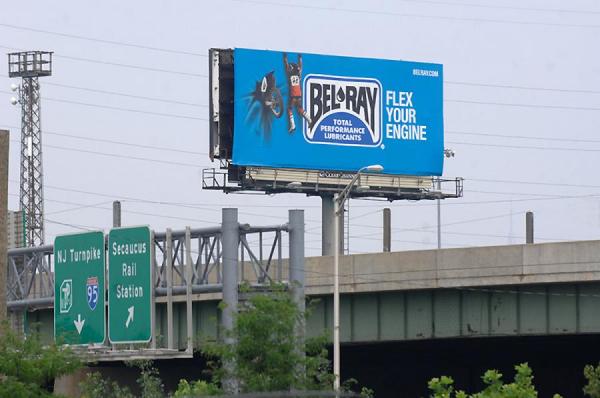 One of the most interesting billboards we've ever seen was posted right alongside the New Jersey Turnpike near the Statue of Liberty, one of the busiest roadways in America. New Jersey is the home base of Bel-Ray Lubricants, and they've had a strong presence going back to its origins here in the seventies. The billboard features half a motorcycle sticking out of it, the rider apparently jumping into the board itself! The only little hitch is that while their main rider the last couple of years was #22 Chad Reed, the bike on the billboard wore #23. Reed and Bel-Ray soon split, though, so Bel-Ray's Scott Lukaitis didn’t have to heed our calls to climb up there with a ladder and swap out the number himself. 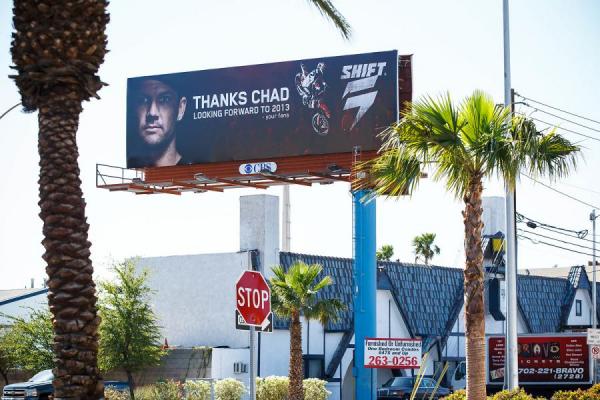 Chad Reed appeared prominently on another billboard, however—this one in Las Vegas. It was a very cool congratulatory note from his sponsors at Shift MX and Fox Racing for a remarkable turnaround to his career in 2011, when he went into the Las Vegas SX finale as a privateer with a realistic shot at still winning the title. He ended up just four points away from what would have been his third AMA Supercross Championship, and the people at Shift wanted him to know how much they appreciated his resilience and career turnaround. 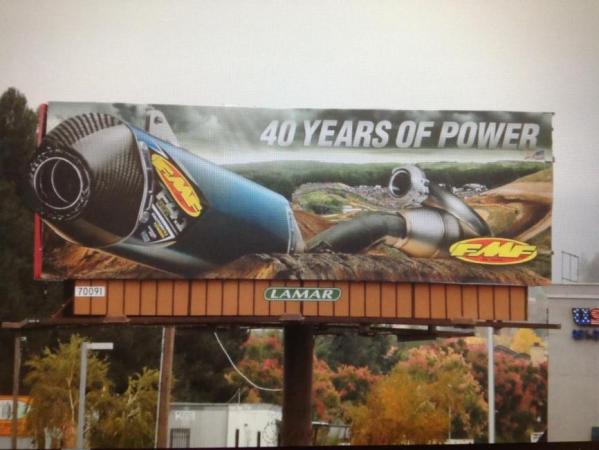 Another sign with a little bit of backstory (at least in its location) is the new FMF billboard that's up along Interstate 15 in Southern California, just below Corona. What's so interesting is the fact that it's located directly above the private practice track of the Monster Energy/Pro Circuit Kawasaki team, between the Weireck and Temescal Canyon exits. It's the latest little jab in the long rivalry between FMF and Pro Circuit. 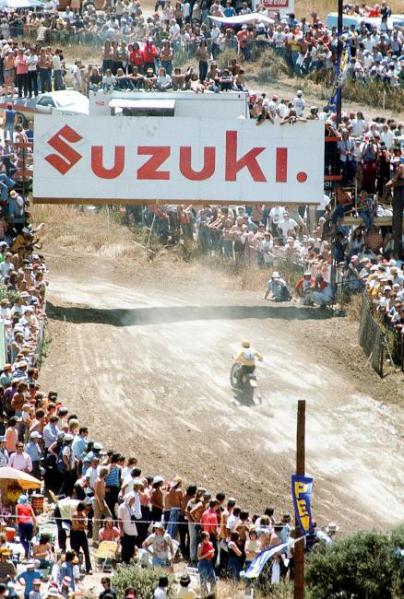 Last Sunday we attended the Carlsbad Reunion near what's left of the once-grand U.S. Grand Prix motocross track. Back in 1973, the first official year of the race as part of the FIM 500cc World Championship schedule, there was a massive Suzuki billboard that covered the walking bridge above the track. It's all gone now, but the memories will live on forever for folks like Roger DeCoster, who was both at the reunion last Sunday as well as in this photo, wearing #1 back on June 24, 1973. 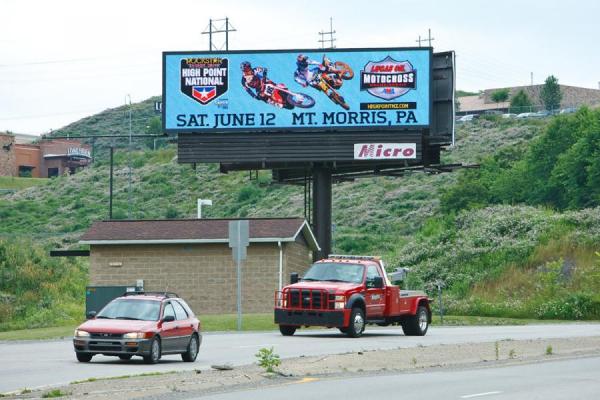 You don't see a lot of motocross billboards, because they’re very expensive to rent—especially when you have to build them from scratch. But now that digital billboards are becoming more and more popular, it's become easier to post information about upcoming events or products, like the ones we see here in Morgantown every spring (designed by MX Sports' Heather Moebus). 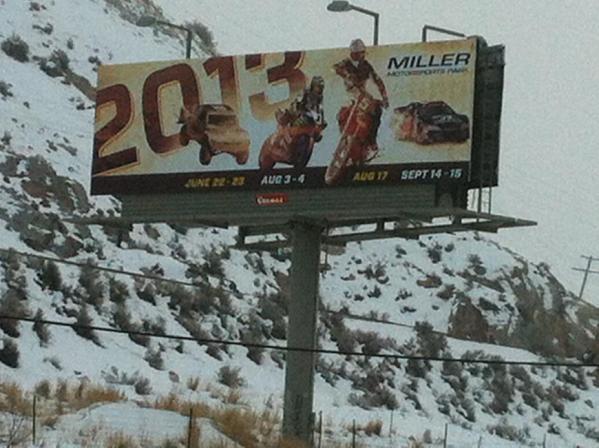 How about this new billboard just outside of Salt Lake City, pointing folks to four different events at nearby Miller Motorsports, including one of the brand new stops on the Lucas Oil Pro Motocross Championship tour, August 17, 2013. 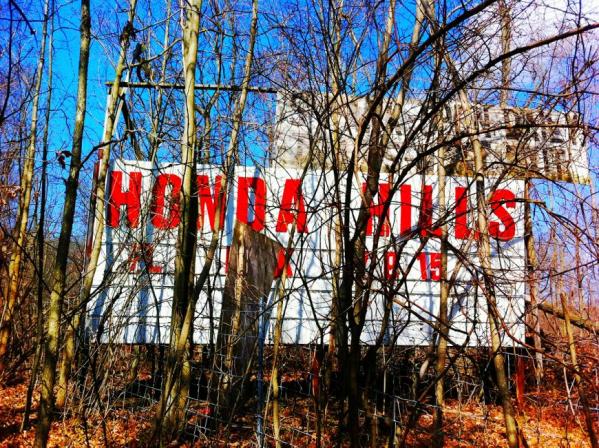 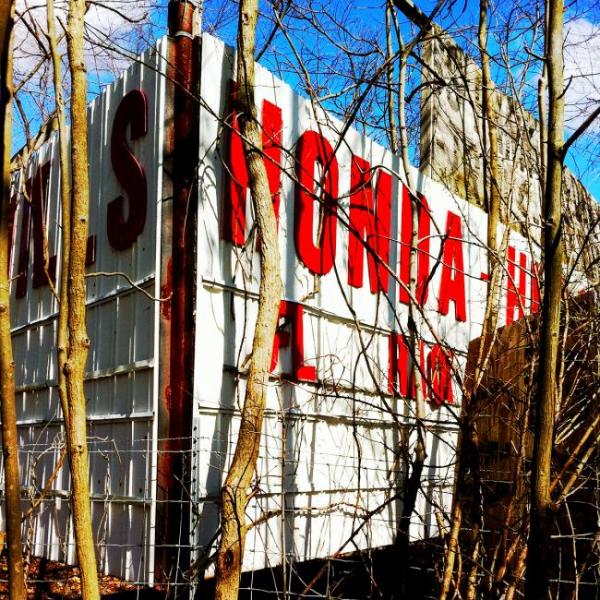 Which leads back to the first billboard for motocross we recall ever seeing, and that's the old sign along Interstate 70 east of Columbus, Ohio, pointing out Honda Hills, once the home of Trans-AMA Motocross and other major motorcycling events. The track, once owned by Hall of Fame racer and Daytona 200 winner Dick Klamfouth, is no longer in operation, but if you happen to be driving along that road on the way to either this weekend's Indianapolis Dealernews Trade Show or next month's Indianapolis Supercross (March 16), keep your eyes on the north side of the road, just after Zanesville and before the Linville exit of I-70. It probably won't be there for much longer—it's had quite a run as one of the oldest motocross billboards of all.

Did we miss a billboard in your neighborhood? Send a shot of along to online@racerxonline.com.