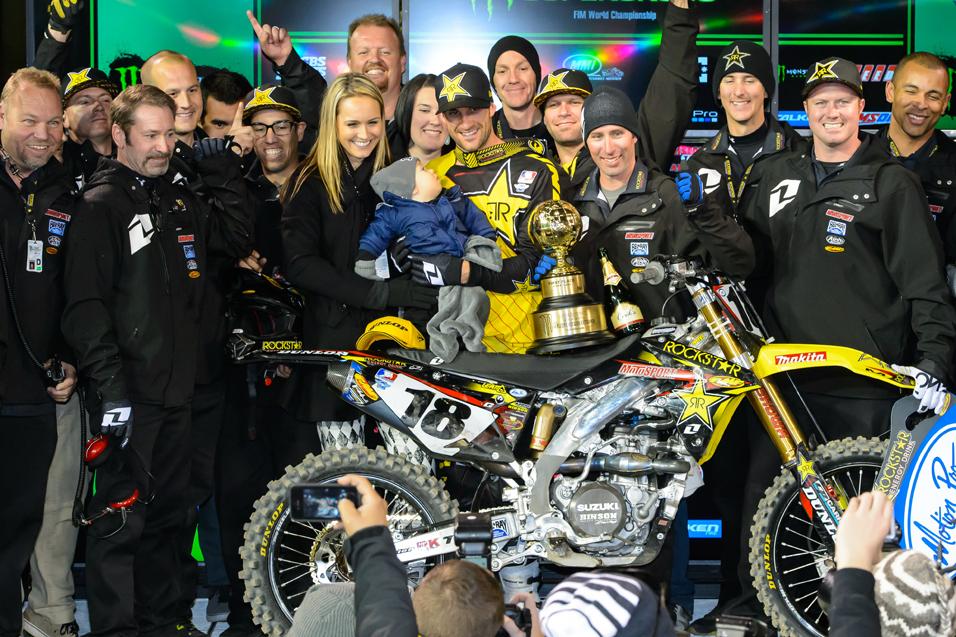 Advertisement | Advertise with Us
AT&T Stadium Arlington, TX Dallas Monster Energy AMA Supercross Championship
It’s the best of times and the worst of times for independent teams. While several squads have closed doors lately, one standout unit, backed by outside sponsor, is currently leading the Monster Energy Supercross Championship. How did Rockstar Suzuki Energy Racing get to this level?

“I run it like a business,” says team owner Bobby Hewitt, who also owns two other businesses of his own in his native Texas. “It drives the guys nuts at the shop. We have accounting and marketing. We run it to make a profit or break even, and if it’s short, we figure out how to cut costs. I run it like my other business, it’s just a different widget.”

Into year six as a pro team, Hewitt has put a premium on simply staying in business, first, instead of winning races at all costs. The goal has always been “to do the best we have with the budget we have. With racing, you get that emotional side to it, you want to win, and you over exceed what you’re financially capable of, and it ends up hurting you down the road. I tell a sponsor up front, we’re not going to give you a $5 million program on $500,000. We’re up front about what we can deliver so no one is disappointed, and we communicate with them.” 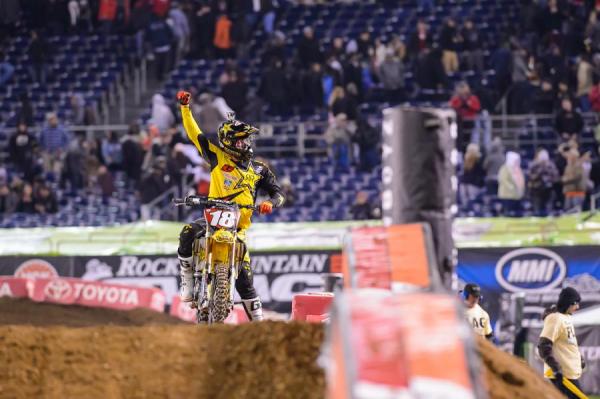 Hewitt’s team actually started as an amateur squad for Kawasaki Team Green, and then blossomed into a pro team. Kawasaki enjoyed having a secondary unit beside Monster Energy Pro Circuit, but when Kawasaki made a bid for Chad Reed in 2010 (teaming him with Ryan Villopoto in a high-budget 450 operation) they no longer had the money to support Hewitt’s effort. Luckily, Kawasaki was up front about the situation, and Hewitt had time to find a new partner with Suzuki. They provided some support in 2010 and then handed over the factory Lites program in 2011. With Suzuki came a Rockstar partnership, too, and a great relationship with factory Team Manager Roger DeCoster. The future was promising, but then a shrinking OEM budget essentially flipped the motocross world.

“The whole time I’ve been in racing, the hardest thing was a title sponsor. The easiest thing to find was manufacturer support,” says Hewitt. “Now it’s in reverse. I have a great title sponsor with Rockstar, and great sponsors like Bel-Ray, Motosport and One industries. Now, the one missing part of the puzzle long term is finding a manufacturer where we can build a relationship—I don’t want to bang on the door and hold my hand out. If there’s a service or a need, be it R&D or expanding your footprint in the pits, or just getting results, we want to be able to provide that.”

Suzuki’s budget cuts for 2011 meant the end of support for Hewitt’s team. “From day one, I said I don’t want to be a team that’s here at Anaheim 1 and gone by Vegas,” says Hewitt. “By our third year with Suzuki, the budget got cut, and we had a meeting with Yoshimura and Suzuki. I put on my business hat. I said I understand the cuts, you have to do what you have to financially. And as a good business partner, I’m gonna cover that myself. We’re going to keep that perception that we’re still the factory Lites program, so as a manufacturer you are still sending the message that you’re strong and you’re still here. But the reality is, you don’t—but I said when it started that I wanted it to be a long-term relationship. I’m here in the good times and the bad times, and I’ll help you get through it. But when you do get additional funding, remember who got you through it. Because everyone is your friend when you have money, and you can’t find a friend when you don’t.” 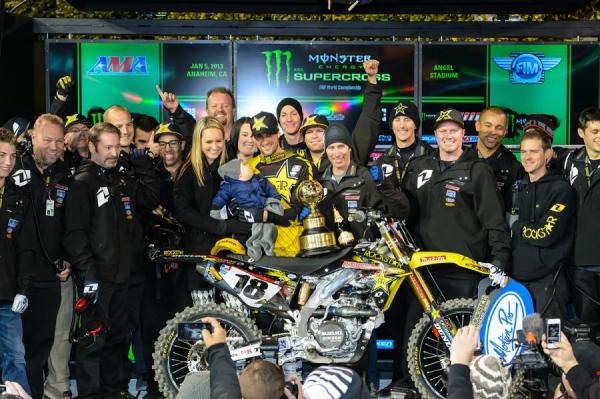 That’s when things went sour. “This year, they had some additional funding, and they decided to go another direction,” says Hewitt. “I don’t make those decisions. I understand how the game is played, it was communicated that they still wanted us to be part of the program, but in the end, powers above my control decided it was in the best interests to go in another direction. By that time, I had too much invested in bikes and development. During that time, since we had lost the factory support, we had invested hard in the research and development of the bikes. Maybe it was naive on my part, but I thought that when the relationship came back, we could share what we had learned with the Japanese, American Suzuki, we could show them what we had developed so we could add value. I want to create value and not just ask them for a check.”

Two years of research and development without factory support has helped them build capable bikes, and Rockstar is still on board to back it. But with the team now more reliant on sponsorship money than OEM support, the general feel has changed. “I tell them [Rockstar] we’re basically a marketing company that happens to be a race team,” says Hewitt. “Because the only thing we have to sell is signage—we can’t sell product. So understanding what their needs are, and giving them a return on their investment is key. Where we are different is, Roger DeCoster works for KTM, and he’s paid to run a race team. Marketing for them is inconvenient—they’re paid to win races. We’re paid to increase marketing footprint.”

Not like results don’t matter, though. Hewitt’s four-year deal with Rockstar is actually contingent on racing success. “It was made very clear to me that if we win a championship within those four years, great, but if we don’t, they will move in another direction,” says Hewitt. “Anything can happen in racing, but we need to at least be in the hunt and contend. Finishing fifth through tenth wasn’t what they are looking for.” 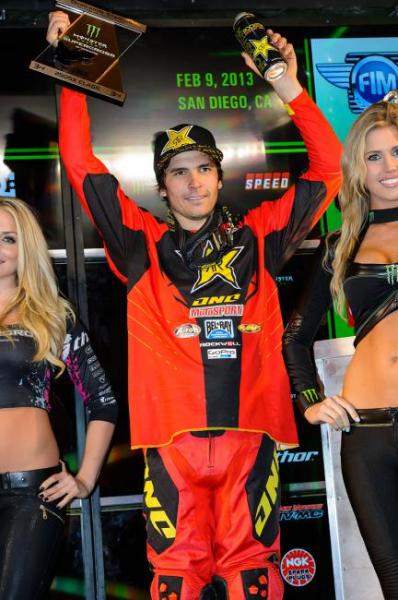 The teams decision to hold onto Jason Anderson is paying off in 2013.
Simon Cudby photo

Meanwhile, the team continues to look for an OEM partner, and they won’t rule out Suzuki. This week alone, Hewitt says he’s had 15 phone calls from people complaining about the SPEED TV announcers for proclaiming Davi Millsaps’ San Diego win as a big one for Suzuki, even though the brand doesn’t support the team. “But that’s okay,” says Hewitt. “I’m not going to go to [announcer] Ralph [Sheheen] and say, “I never want to hear Suzuki when you mention my team.” I haven’t done that and I won’t do that. I’d still like for things to work out with them, and if we’re continuing to have success, maybe they will see the value we can bring.”

If there’s an advantage to the program as it stands today, it’s the general nimbleness of an independent operation. When Rockstar wants a change, they can go directly to Hewitt and Gowland and discuss it, instead of working through the corporate structure that runs a factory-backed team. Plus, Hewitt believes the family atmosphere has fostered results.

“My best example is Jason Anderson,” says Hewitt of the 2010 AMA Horizon Award winner who basically bombed out of his rookie pro season. “I told Jason he’s either going to make me look like the smartest guy in the world or the biggest idiot. But I told him, I believed in him from day one and I still believed in him—and believe me, I had every sponsor and every manufacturer saying to dump him. But if I had cut him, his career would have been over with, he would have never had the confidence again. So we kept working with him. Hey, if you sign a guy, it’s because you believe in him. And if you can convince a guy you believe in him as much as he believes in himself, that can go a long way.” 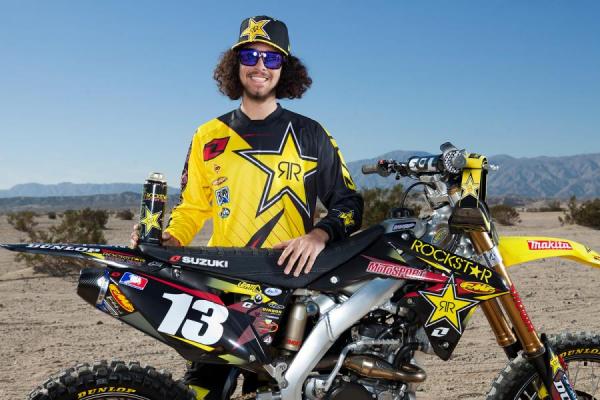 Belief has been the theme of Davi Millsaps stunning drive toward the 450 SX Championship. Millsaps has always possessed great talent, but several down years had sapped him of confidence. He remerged last season with the JGR Toyota Yamaha team, but has taken another step this year. The Rockstar team, as well as Millsaps’ personal crew such as Ezra Lusk, has pounded home the point that Davi can beat anyone. Six weeks into the season, that’s now undeniable.

“I tell every rider I have that the difference between me and everyone else is that I’m going to love you on your bad days as much as your good days,” says Hewitt. “Look, I’ve got a bunch of Monday misfits. I’ve got Blake Wharton, Nico Izzi, Ryan Sipes and Jason Anderson—they’ve all had their ups and downs, but they all have the talent to win. They need that reassurance. If Izzi [who is currently out with an ACL injury] has called me once, he’s called me a thousand times, “You’re not going to cut me are you?” No. I signed him for a reason, and he doesn’t need to come back until he’s ready to come back. I know it sounds corny, but we’re a family here. And when you win together and you lose together, it works so much better. That’s what I’ve tried to build here. So many people say, “I want it today, I want it now.” But it’s a process, and all of the work we’ve put in to get here is starting to pay off.”