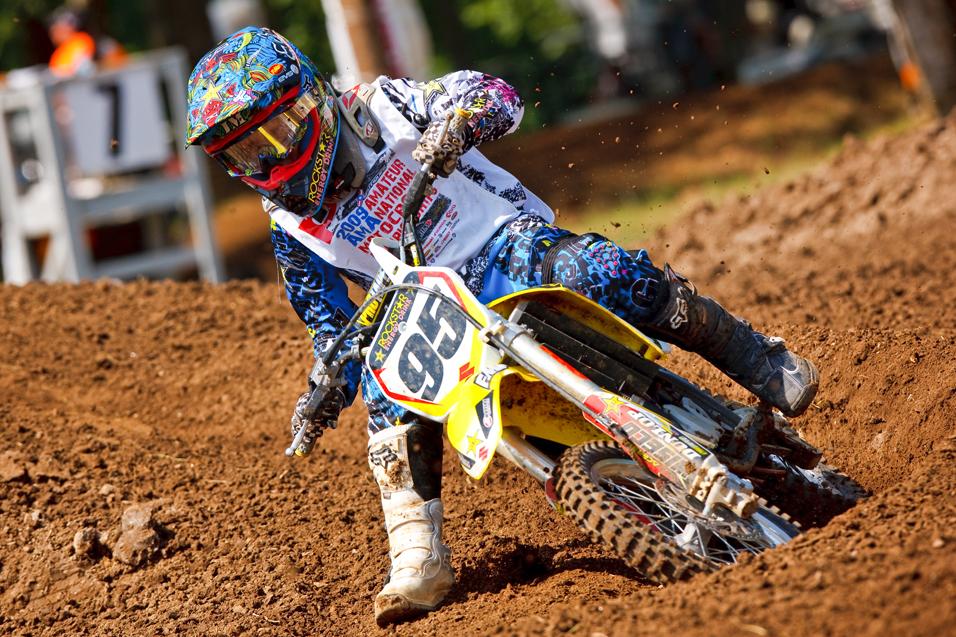 This weekend at Glen Helen Raceway in San Bernardino, California, an innovative race promises to bring a new look to the sport. Run by Jerry Masterpool, father of the late amateur standout Jesse Masterpool, and former Suzuki Amateur Team Manager Cole Gress, the 956 Invitational will display Jerry’s forward-thinking ideas on motocross safety with a redesigned track layout designed to promote racing and passing—and reduce crashing. We called up Gress to get the scoop, and if you want more, check out www.spirit956.com or just head to Glen Helen!

Racer X: Cole! It’s been a long time since we talked. I know you’re not a full-time industry guy anymore, but here you are, back in business for at least one weekend.
Cole Gress: Yeah! Hey, when you have a passion for the sport, it never truly goes away. Nowadays I work full-time in the medical field, but when Jerry approached me with this idea for a race, I said, ‘I would love to help you with this.’ I’m in a very, very demanding career, but this is worth the extra effort. We have to try it, at least once. If you don’t, you’re going to regret not trying it. That’s kind of where we’re at – a big leap-of-faith type of deal.

I know after Jesse Masterpool passed away after a crash, the Masterpool family has stayed involved with the sport, the family is still racing and still training other riders, but they’ve kind of taken a new look on safety, too. I would assume that’s the pillar of the event, trying out new things for safety’s sake?
Exactly. The premise is the kids, the bikes — everything’s  evolving. Everything’s getting faster with technology and the speed of the bikes, kids training full time with the amount of training facilities available. The kids are getting faster and better earlier. Their techniques are advancing much earlier. Maybe some of the tracks haven’t evolved totally. So Jerry’s theory is to build a race course for these amateurs so they can push the limit, so they can develop their skills of passing, so they can develop their skills of generating speed – but not just hauling butt down a straightaway and trying to scrub this jump as fast as they can. Jerry’s theory of using switch-back corners, the way the jump faces are – it’s all about kids developing techniques to go faster and searching for speed, not just constantly chopping the throttle and trying to bring down their speed scrubbing a jump. So that’s what this event is. That’s where his track design and layout come into effect. It’s all about developing kids, amateurs, to race at their full potential at the safest possible level. 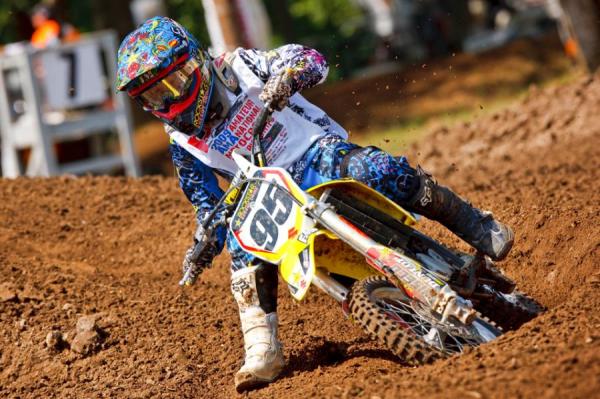 In memory of Jesse, the 956 Invitational aims to make racing safer at the amateur level.
Cudby photo

So this race at Glen Helen, it will actually affect the track layout?
Yeah, you won’t even recognize Glen Helen. It’s unbelievable the way he switched it up. The finish-line straightaway’s about the same. Otherwise… you better be sitting down; we’re not using the hills. Glen Helen’s notorious for the hills. The way he’s switching back things, going back and forth, he’s using the hills but we’re not going all the way to the top and just blazing down. It’s about creating switch-backs and rhythm sections that develop these kids and give them safe zones and eliminate some of the blind areas. He’s trying to develop a full track from a safety standpoint that lets them race at their full potential without having to worry about coming over some big blind sport and landing on somebody. I know that’s very drastic but the whole thought process is that everything is for a reason. Every turn, every rhythm section, it has all been thought out to be the safest and most race-effective layout as possible.

What experience do the two of you have in actually being race promoters? How hard was it to get this event together?
It’s the hardest thing I’ve ever done! It is so difficult to do. But let’s just implement fully what we want to do and hopefully it springboards... people want to copy it and implement certain areas and aspects of this type of model. We hope to make the sport better. And we hope to make it safer for amateurs racing. And we hope to have a great track. We hope people like what we’re doing.

Give me the details so people can get involved.
The race is going on this weekend, January 25th, 26th and 27th at Glen Helen Raceway. Jerry’s been out there for two weeks working on the track. Glen Helen’s been awesome, but thanks to Lori Bryant out there, who has been great to work with, but she has her own things going on out there, too. They have their own events they’re working on and their own tracks. We show up thinking we’re going to have all this nice equipment to use and they’re like well, we got this going on, we have to use this for other events, and Jerry’s like, I can’t be sitting around. So we had to go rent him a dozer for two weeks, and you know how expensive that can be. So that’s the first big hurdle you jump into, being a race promoter deal. Today, Thursday the 24th, it’s a standard Glen Helen practice day, but every rider that comes out to practice will get a glimpse of what the 956 Invitational track’s going to look like. Then we go racing for the weekend. 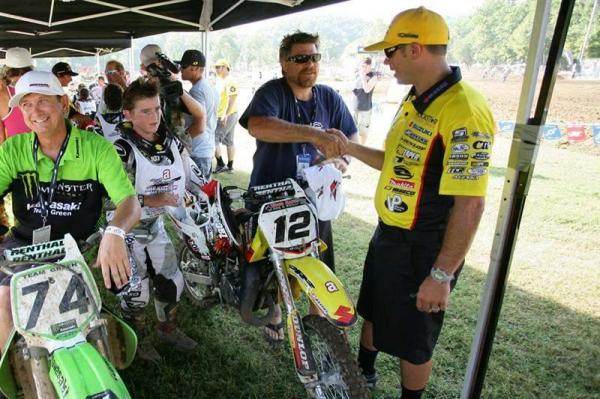 Gress comes back to the sport after realizing the potential impact of on-track safety.
Cudby photo

You used the term “Invitational.” Is that what the race is or is it something anyone can come out and race it?
It’s an invitation for all to come out and experience. This race is built for the amateurs, built for the kids to come out, all the way down to building certain sections differently. So for the small bikes, we call it a size-appropriate type of obstacle section where everything is built for them. 65s and 85s can jump a 75-foot step-on-step-off, but we don’t want them to. They don’t need to be jumping that in a race situation where if something goes wrong it really goes wrong at that speed and that size of jump. A 250 or 450 can jump 140 feet but that doesn’t mean we want it on the racetrack, you know what I mean? So there’ll be a section, like a little, nice, technical rhythm section that the jumps are molded better for the smaller bikes, so when they case it, it’s not catastrophic for them. Then the big bikes, we veer them off to their own section where they’re like, oh, man, I’m able to climb this hill, scrub it, come down and then they’ve got a nice, safe turn, 70-footer turn double that I can jump back in on. So the big bike riders will be stoked and happy, and then the little bikes, all day long the 50s can double, double, double, double they smaller jumps, and the 80s can triple in. We’re hoping with that type of deal it doesn’t hinder one set of riders and makes it safe for everybody and fun for everybody.

Are these ideas that you have really even had the chance to see work or is a lot of it just kind of experimental on your part? Or has Jerry tried this at his own tracks at home?
Well, Jerry, he has 1,000 acres in Texas. Matt Bisceglia, he trains down there. Austin Forkner, he goes down there sometimes. And he changes his track every day. He spends 8-10 hours on his dozer a day! Jerry trains kids from like 8-2 and then they’re off to the gym or whatnot and he gets on his dozer. He’s been experimenting nonstop since 2010 with these theories and these obstacles and these jumps. He, more than anybody, has the saddle time to do this type of layout.

Anyone can come race?
Anyone can come race. Our website’s up – www.spirit956.com. On Friday, we’re going to do a full round of practice sessions for everybody so everybody gets the track dialed in. What’s unique about this event is the second round is timed, so everybody’s going to get lap times and qualifying times basically, but here’s the caveat to it: That time, the fastest qualifier will get first pick on the gate, but not in the traditional sense where you make the first pick. You will earn the first position on the gate. And then sequentially, the second fastest will get the gate right next to the fastest qualifier. The idea is to have riders of similar speed lined up together. Sometimes, the second fastest says, well, I don’t want to be right next to fastest guy, I want to be eight gates further down because I feel that’s the best. So the fast guys are being mixed up with everybody else, and when they start, we call that the crunch. The two fastest guys are squeezing the eight riders between them, and that squeeze can create pileups. We’re avoiding that as much as possible – you can never fully do this – but as much as possible we’re avoiding that crunch. Then the first turn kind of serpentines around a little bit and it will funnel into two lanes. So a guy on the inside, he’ll have to commit to the inside. Then the inside becomes the outside of the next corner as it serpentines around, and then, boom they’re onto the racetrack, and they all come out, in theory, safe and they start an epic race and an epic battle. That’s the plan, anyway. We’re excited to see how it turns out.
Presented by:
Read Now
November 2020 Issue Now Available