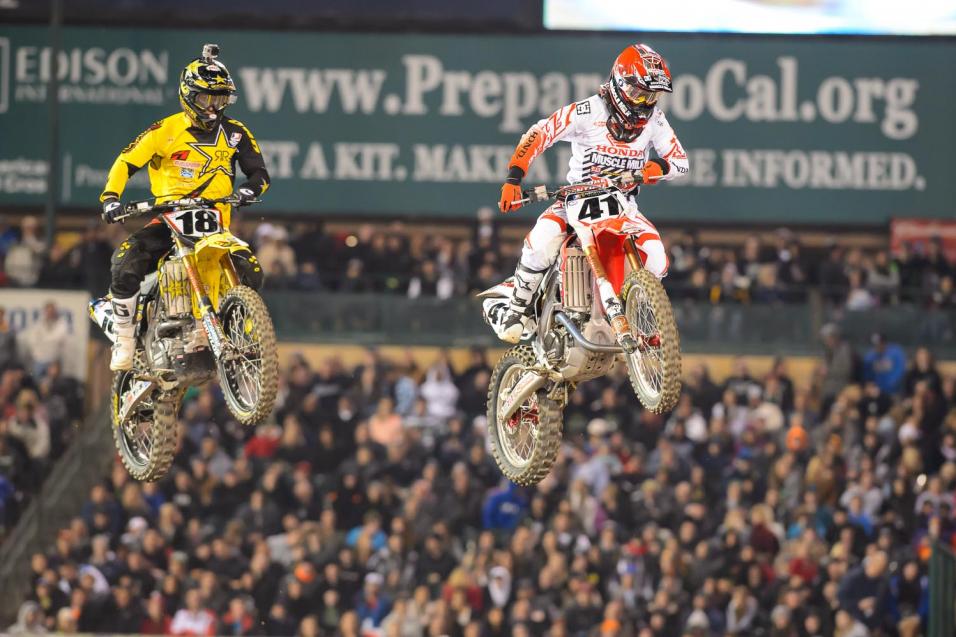 This is a year where everyone is pumped on the endless possibilities, the unpredictable scenarios and the depth of the field. But even with all those expectations to expect the unexpected, the Anaheim 1 opener to Monster Energy AMA Supercross an FIM World Championship still produced results no one expected to see.

Ready? For most of the main event, odds-on favorites Ryan Villopoto, Chad Reed, James Stewart and Ryan Dungey weren't even in the top three. Instead, Rockstar Energy Racing's Davi Millsaps, and Muscle Milk Honda men Trey Canard and Justin Barcia occupied the top spots. Millsaps rode well all day long, with speed just behind Villopoto and Stewart in practice, and then a heat race win. He then grabbed the holeshot in the main led the majority of the way—sure, Millsaps finished second in last year's championship, but that was against an injury-riddled field. Could he back it up? His answer here was a resounding yes. In addition, Millsaps he had not won a 450SX since San Diego nearly three years ago, and, this was his team's first-ever foray into the big bike class.

But his performance wasn't the only surprising one. Canard, just under a year removed from a crash that left him with a broken back, was sticking right with Millsaps and looking for a place to pounce. His teammate Barcia, in his first 450SX ever, was also in the hunt. Dungey was, too, looking steady in fourth on the Red Bull KTM. Reed stayed in fifth for most of the night, but didn't have the pace to keep the lead group in sight. The Millsaps/Canard/Barcia/Dungey group let the laps click off, each waiting for an opportunity. 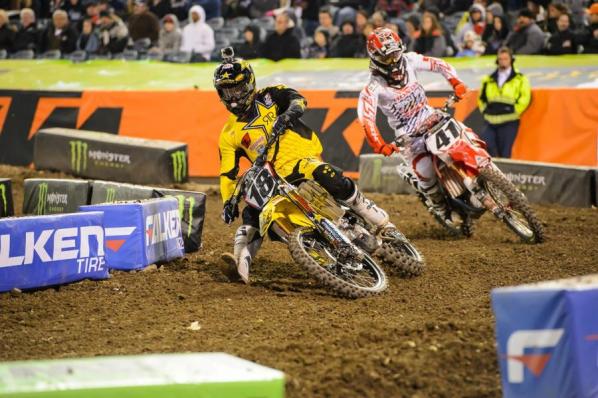 The Millsaps and Canard battle lasted the entire race. 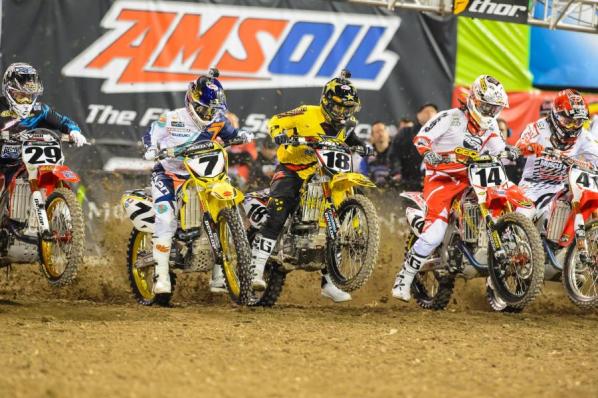 As for Villopoto, he chose the inside gate for the main event but got a bad jump and entered turn one in last. He started slicing through the pack, but then went off the track. He charged again but then crashed huge in a rhythm lane. He seemed to get up hobbling, but went back to work making passes until he crashed for a second time. After that, the wind was out of his sails and he struggled to 16th. Monster Energy Kawasaki team people say the two-time and defending champion didn't suffer any injuries.

Stewart, meanwhile, already had. He threw down the fastest lap in practice only to then catch his knee in a sweeper. In pain, he pulled out of practice, and no one was sure he would even be able to race. He gutted it out, even leading his heat race a bit. Then in the main he rode smart and steady to salvage eighth. Yoshimura Suzuki Team Manager Mike Webb said James will have to get and MRI to check the knee's status, right now they don't know much. 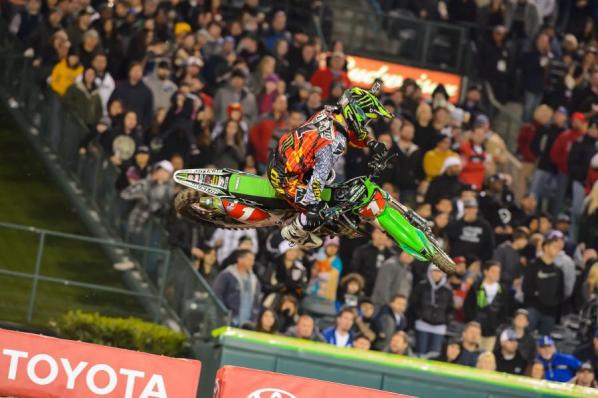 RV showed the same speed that makes him a two-time champion. But boy did he crash a bunch. 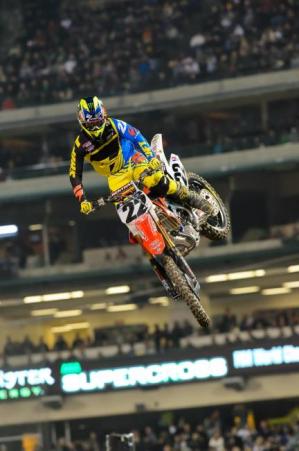 Reed wasn't fire or ice, he was somewhere in between. He finished fourth. 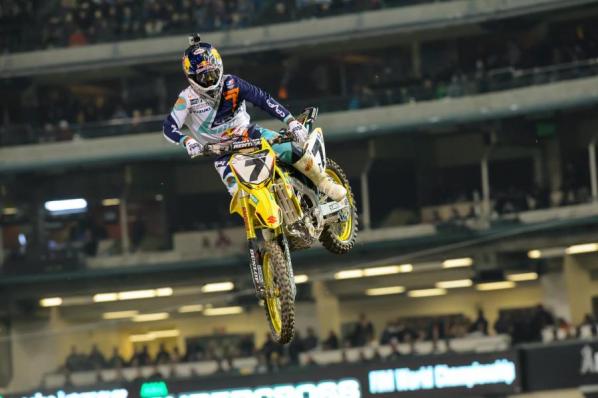 Stewart dabbed his knee in practice and that was enough to jack it up. In pain, he salvaged an eighth. 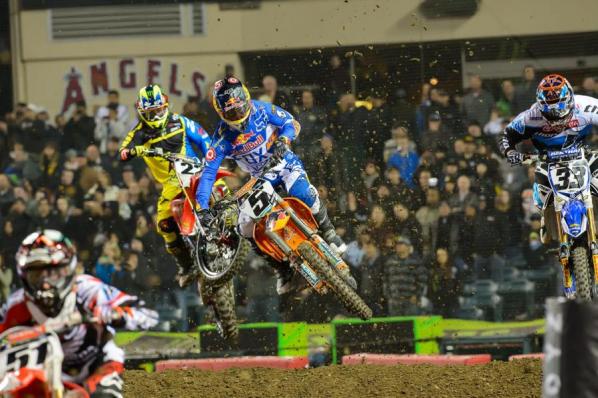 Dungey battled his way to the front, and overcame a small crash, to finish third.
Cudby photos

By lap 15, it was clear the race would be won by one of the four riders up front. Then, surprisingly (there's that word again) Dungey knifed the front end in a corner and crashed. Not long after, Barcia crashed on a double jump out of a corner. Dungey was up quickly enough to stay in fourth, and when Barcia crashed he inherited third. Barcia took longer to get up, and Reed and Monster Energy Kawasaki's Jake Weimer rode past.

So now it was down to Canard versus Millsaps, and they were in close formation up front. Canard got aggressive and made the pass, and even stretched it out slightly. As the white flag came out, it appeared Canard was set for one of the all-time emotional, all-time career comeback wins. But he faltered a bit on the final lap, while Millsaps kicked in one last push and closed in. They battled, and Millsaps found a good line in a rut, sliced into the lead, then blitzed the whoops to build a cushion. On the final lap, Millsaps made the clutch pass to win the Anaheim Supercross.

Canard's second was just as impressive, while Dungey salvaged a podium. Reed and Weimer rounded out the top five. What's next? Who knows? 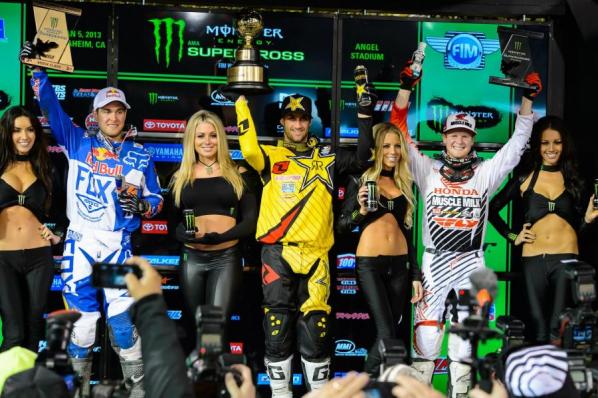 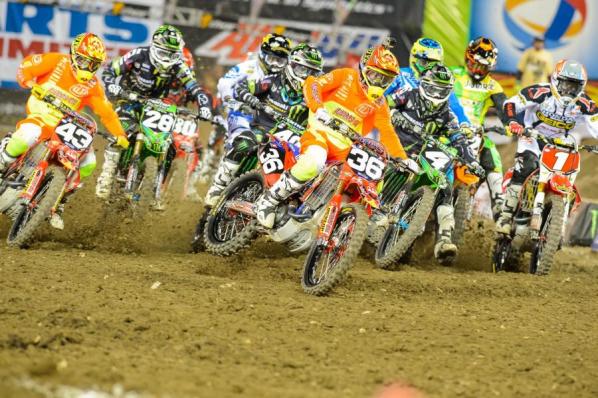 A 250SX start. TLD Hondas were fast out of the gate each time.
Cudby photos

At least the 250SX class lived up to what it was supposed to. Defending West Region Champion Eli Tomac was expected to dominate, and he did exactly that. After Lucas Oil Troy Lee Designs Jessy Nelson grabbed the holeshot—and then crashed on the first jump—Tomac found himself in the lead on his GEICO Honda. Ken Roczen was second on his Red Bull KTM, and he had shown the speed to match up with Tomac in practice and the heats. But in the main, Tomac just marched away 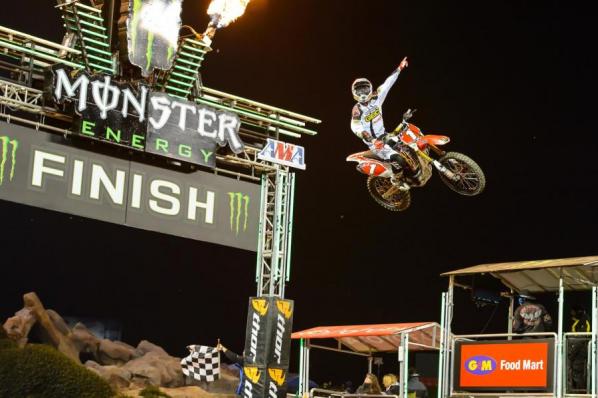 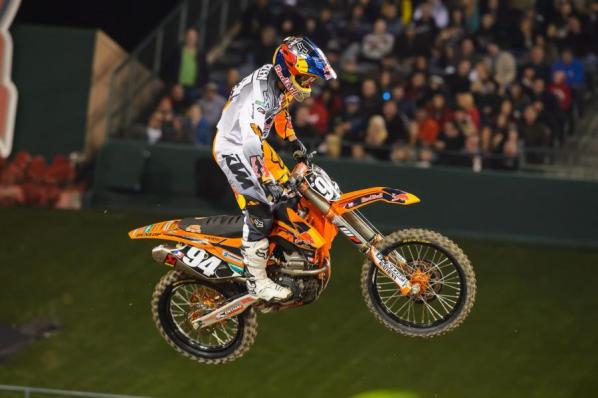 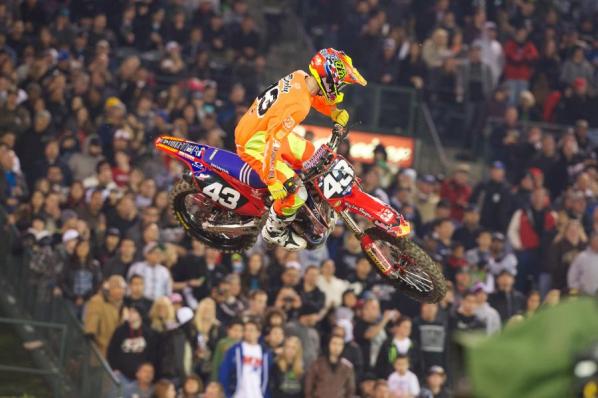 And here is Seely.
Cudby photos