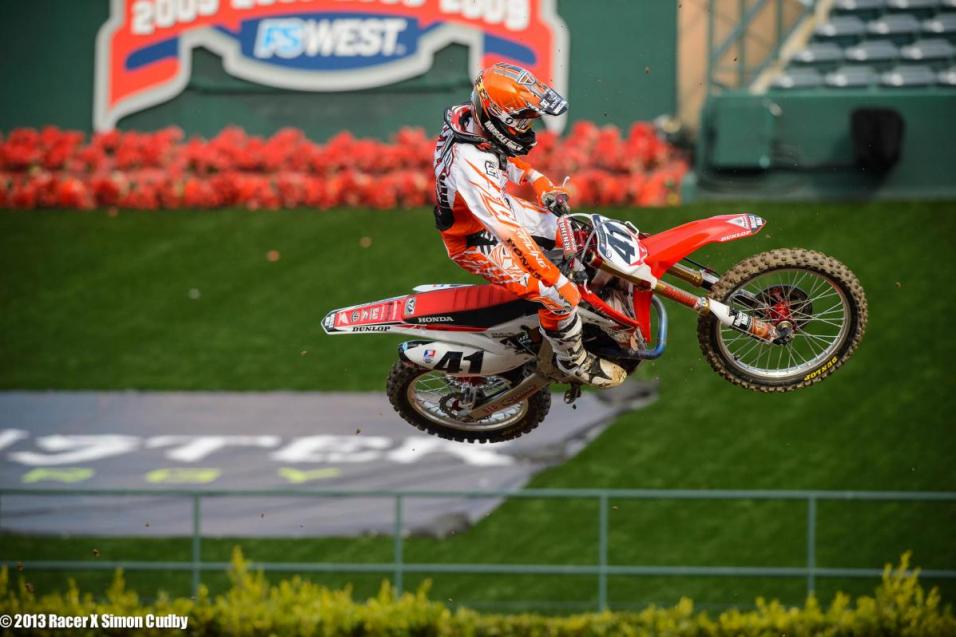 Practice is in the books here at the opening round of Monster Energy Supercross in Anaheim, California, and while several riders took turns setting the fast times, it was business as usual for two riders when the final session ended.

The first timed 250 session saw Jason Anderson immediately jump to the top of the board, but his time was soon bumped by a charging Ken Roczen’s 59.495 time. Roczen would better his time a lap later, but Ryan Sipes would claim the fast time shortly thereafter with a 58.241. The session was then interrupted when a crash from Killy Rusk brought out a red flag. After Rusk was able to walk away, practice resumed and Eli Tomac went on a rampage that would see the big number one stay on top of the board for the rest of the session. Tomac ended with 57.630, followed by Ken Roczen (57.641), Martin Davalos (58.039), Ryan Sipes (58.241) and Blake Baggett with a 58.432.

The final sessions weren’t too much different than the first. Roczen held the fastest time for several laps before Tomac, who as usual was searching out new lines and attacking the track as if it had stolen his lunch money, rose to the top and set the final fast time of 56.705, followed by Roczen (56.767), Zach Osborne (56.897), Blake Baggett (57.015), and Martin Davalos (57.189).

In the 450 ranks Villopoto was fastest initially until Millsaps knocked him off the top with a 55.917. Then, on his sixth lap, Stewart laid down a 55.401 and promptly exited the track. Elsewhere, Dungey, who is running a trick looking air shock, pulled off into the mechanics area for several minutes so his mechanic, Carlos Rivera, could make adjustments to what appeared to be the shock. We know The Dunge is running a new "air shock" without an external coil spring.

Be sure to stay tuned to Racer X Online and follow us on Twitter, @Racerxonline, for updates from the opener, all night long. For photos of practice check out our Simon Cudby’s photos from the qualifiers we posted earlier today.