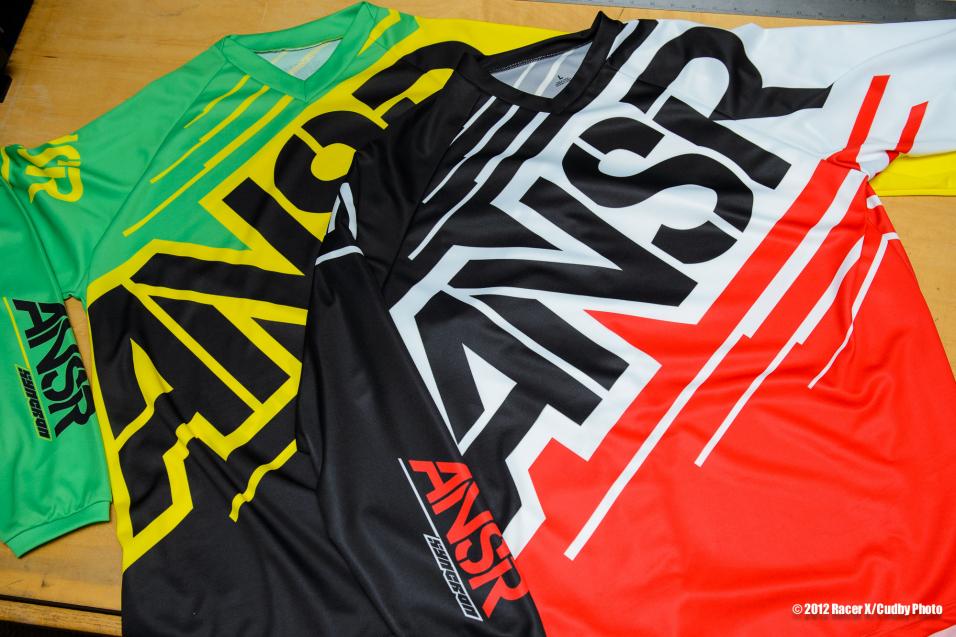 With a new rider for 2013, Answer Racing is hoping for a continuation of the brand growth they have experienced in the past few years. We talk with Director of Answer Racing, Dave Casella to find out more.

Racer X: This is the crunch time of year for guys in your position, because you need to have everything dialed in by Anaheim 1. And that's hard!
Dave Casella: Absolutely. We've spent the last two months working around the clock preparing for Anaheim 1. It's kind of like that training story you had from JT$ last week, where the riders are actually backing it down the week coming into the race. They've already spent the time doing all the hard work and training. By then, they know where everything is at, and they're just ready for the race. As an apparel company, it's the same way. We've been building and building for two months! If we're not ready by now, we'll never be ready.

People probably don't realize how many angles you're dealing with. First the gear itself, the look and performance of it. But also that ties into your marketing, the riders you back, the ads for it, there's a lot of planning.
Yeah, and it's getting harder. We're in Corona, California, which was always the hotbed, but now more and more riders are in Florida, so it gets more difficult to get photos and things like that. Now we have to get the gear in earlier, plan around their training down there. It's a carefully-planned roll out, because we have to make sure the dealers are ready with product at the same time. 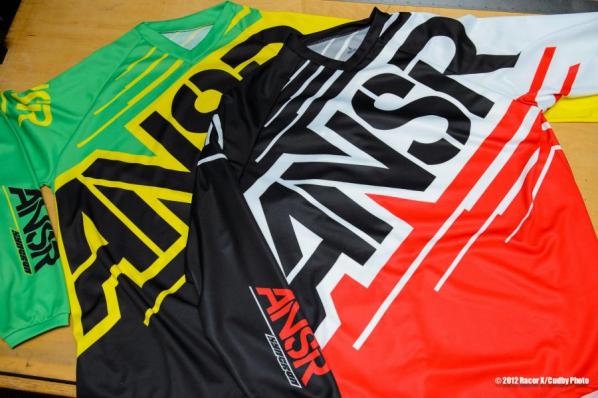 A sneak peek of the 2013 Answer line.
Simon Cudby photo

Oh, so add another element. The gear, the rider, the marketing, and then the distribution, making sure these things all time out at the same time.
It's all one big roll out. We can't just say, “Hey how sick would it be to run this colorway?” Because it has to be thought out well in advance, we have to know when the rider is seen in that gear, that the distribution network has come through to get that gear on the shelves at the dealers. We can't catch anyone within that chain off guard.

So, if you launch a color at a race, you literally will see customers going to their dealership on Monday to buy it?
Oh yeah, win on Saturday sell on Monday, it's very true. Sometimes, we will release stuff a little early to get a consumer buzz going, maybe two or three weeks. It depends. There's even a theory as to what the riders wear in practice. We know all of the press comes from the first six races or so, and photos will launch during the day from those first practices. So at some of the early races, we'll have the riders practice in our mid-level gear line, which is more consumer-friendly, dollar wise, so they get to see that. There is never a time when a rider just throws gear on. It's always thought out well in advance.

A lot of people will make fun of these riders for having gear guys. It's like, “Can't they just bring a gear bag to the races like I do?” But there's a hidden reason for that—they can't just pull stuff out of the closet.
Oh, we'd actually be petrified if a rider brought his own gear to a race! Of course, we will always work with the rider to give them what they like. Sometimes they get supersticious, maybe they've had a crash while wearing a certain colorway, and they don't want to wear that. So we'll have to work with them for things like that. But having a gear guy at the races, who works in our office every week and understands what we're trying to do, it's invaluable.

The big story on your end this year is adding Jake Weimer.
Yeah, Answer was entering a new era, and we talked to a bunch of riders, like Jake, Dean Wilson, just a bunch of guys. We really hit it off with Jake right from the start. He came down to the offices and it went well. With the racing, we already know him, we know he's going to train hard and give you everything he has at the races. But as a person, we think he will give us some individuality. Jake really wants to get out of the shadows and show who he really is. That's what Answer does best, we're a company that appeals to young riders and those that want to stick out a little bit. 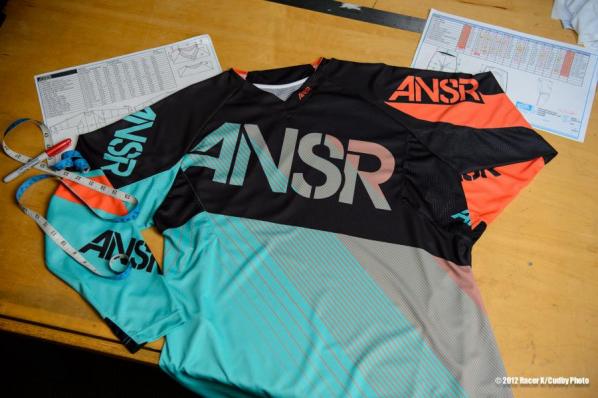 Another look at the 2013 line.
Simon Cudby photo

So you say it's a new era, is there a big change in the look?
Yeah, I'd say it's a pretty significant revamp. Jake will be wearing our new Elite gear, which is a lot cleaner and bolder look. Kind of like Johnny O'Mara from his Answer days, that period type of gear, less print and more color blocking. And you'll see some brighter, bolder, colorways. We've had a lot of these ideas in our bank, and we were just waiting for the right time to do this. We have a new rider and with Anaheim coming, the time was right to launch these new ideas.

So what's it like for you when you get to Anaheim? Do you get to take a breath?
I think the only time I really get to enjoy it is when the fireworks go off at Anaheim 1, and my four-year old climbs on my shoulders to watch. Up until then at the race, I'm bringing our key dealers around and things like that to meet the riders and do the hustle and bustle. But, man, I still get the chills when those fireworks go off! And when K-Dub does the nosewheelie, too

Yeah that's right, MSR is under the Tucker Rocky umbrella, too, so I'd imagine a lot of thought goes into that, too. Which rider fits with brand and style.
Having the two brands, MSR and Answer under the Tucker Rocky umbrella, it's great just because there's strength in numbers, but also we have to make sure they appeal to two different clientele. I think you'll see that MSR is the gear that really works for that blue collar, hard working kind of person. Anyone from a six year old or a 60-year-old—and Kevin Windham and Nick Wey, they really bleed the brand and understand what it stands for. But then Answer, it's really for the youth rider, and Jake will play a big role. We also have our amateur army going on with Answer for the youth brigade. At the end of the day, we have something for everybody.

Well, you know how that goes, you'll have a 15-year-old and a 50-year-old in those stands, and they could see the exact same thing and have two totally different opinions.
Well, that's what you always say in the apparel business, and I've been in it for almost 20 years. Everyone has an opinion! Whether it's a color or a style, everyone has an opinion when it comes to apparel, and they love to voice it!