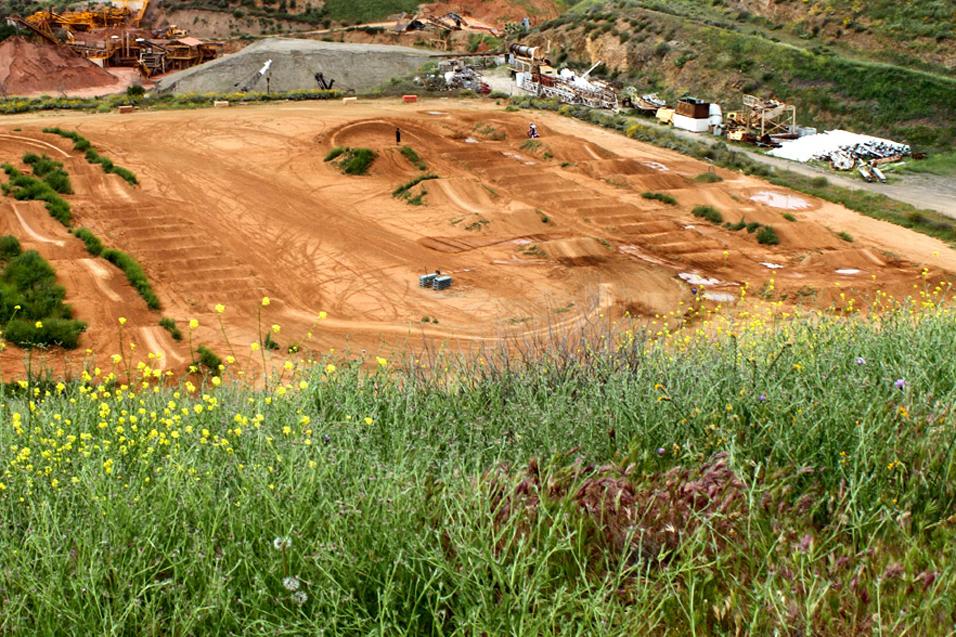 Insight A Typical Day in California

It’s getting busy out there in the golden triangle of motocross. The Southern California hills are alive with the sound of four-strokes and the smell of burnt clutch fibers. The area south of Corona, California, where the supercross test tracks are located were active this week. I ventured down there on Wednesday and Thursday to watch some dirt bikes, bug the crap out of people and see who’s doing what.

First up was the Honda track where the #41 Trey Canard was putting in laps under the watchful eyes of his mechanic Brent Presnell, practice bike mechanic Gregg Albertson and mentor/life coach Tim Ferry. Trey’s coming back from a serious injury suffered last winter at the Dodger Stadium round but you wouldn’t know it on this day.

Canard did a couple of 25-lap sessions and he looked real sharp. His ridiculous scrubs were in full effect and he looked aggressive yet effortless out there. For the most part his times were consistent each lap (Presnell would board him every lap), a couple of times they were a bit higher than he would’ve liked but that was when didn’t land exactly right and couldn’t quad in this one rhythm section. 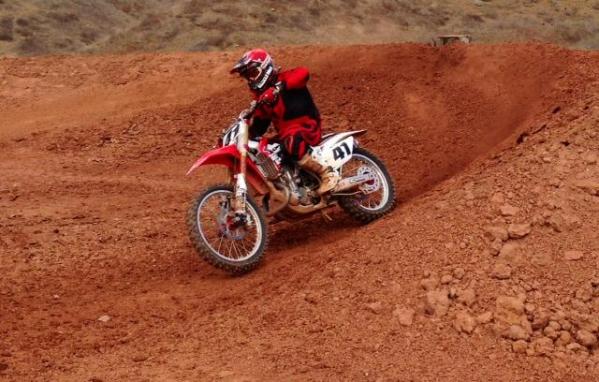 After each time out Canard would pull around and talk to Ferry about different things he found while he was out there, Presnell would make sure the bike was set and Albertson was filming the whole time for review later. A couple of years ago I made this same trip to watch Trey and I saw the same things. Incredible scrubs, impressive whoops speed and to me, there’s no doubt that Canard looks to being back to being a potential race winner each and every time he gets on the track.

Of course, in my eleven years of being a mechanic, I saw a lot of test track heroes over the years (Ezra Lusk being one of them. Oh, Yogi would absolutely tear up the Yamaha track before going out in the races and being unable to keep it on two wheels) so I’m not going to stamp any predictions for Trey but let’s just say he looked pretty good.

Also riding there was Chaparral Honda’s Andrew Short but he was just finishing as I arrived. I didn’t get to see him ride much but from what Persnell was telling me, it was one Short’s best days at the track. He was very sharp. I spoke to Shorty afterwards about a bunch of things, he professed his love of the 2013 CRF450 to me and when I laughed at the fact that all the riders this time of the year profess love for their bike, he got real serious and insisted that it was true. One thing I did notice was that Andrew was riding without a neck brace, which is something new for the 29. 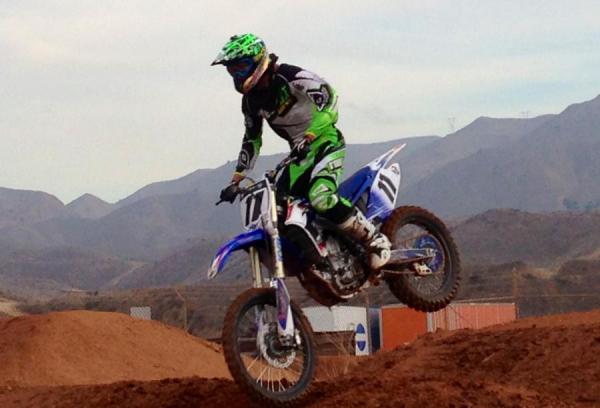 Also out there was Japanese national champion Akira Narita who was riding supercross in preparation of contesting some of the opening rounds here in the USA. Narita hasn’t raced here for a while (I think 2008?) but he’ll be back at a stadium near you with Irv Braun making Kamikaze references left and right. Narita had a nice crash a couple of days ago when he cased the quad in the rhythm section and he was a bit timid out there on this day.

After the riding was over, it was a little Seven Oaks Deli with the Canard crew (if you want to see some factory superstars, hanging out at this little deli just down the road from the tracks is not a bad thing to do) and some reminiscing with Ferry over, well, you know.

After that I went up to my old haunts, the Yamaha track, which was much busier than the red guys on this day. The Velocity 3 team was there getting some testing in with Bobby Kiniry and Kyle Chisholm. The N-Fab/Ti-Lube team was out there with Chris Blose, and Ryan Morais, team manager for Star Yamaha, was testing suspension for his riders with Ross Maeda of Enzo Racing. Jeremy Martin of Star was out there as was Travis Baker of the Valli Yamaha team. In short, it was a beehive of activity. Even RCH Suzuki’s newest rider Broc Tickle was out there hanging out after his day was over. The Suzuki track is right above the Honda track and I think I saw Josh Hill up there but I can’t be sure.

There are two tracks at the Yamaha facility and the guys were spread out over both of them. Chisholm was just getting back into riding from a foot injury and wasn’t pushing it much and Kiniry’s day ended with a bike issue. Blose was testing suspension with his mechanic Donk and Morais might have put in the most laps out of anyone there trying to nail down a setting on the Yamaha YZ250F.

There was a lot of hanging out and talking things through with the guys. There was supposed to be rain the next day and a lot of guys were making alternate plans for their day. The Velocity 3 guys were hoping to get their poster shoot in but it wasn’t looking good with weather.

As I was leaving, it was almost time for the headlights to be turned on and the only guy left was the guy who didn’t have to be there. Morais, freshly retired and missing it no doubt, was pounding out laps to try and make his Star Yamaha bike better for his guys. I don’t know if his team is going to win this year but I can tell you it won’t be for a lack of trying by “Mo” and the guys.

So with there being no more tracks to visit, I did what a lot of guys do after riding: I headed over to Pro Circuit. Mitch Payton’s house of horsepower sponsors a lot of riders and also houses its own race team. I walked into the back to see who I could get info from bug the crap out of and the first guy I found was suspension guru Bones Bacon. Bacon’s been the guy there for the last thirty years and is probably single handedly responsible for the “kit suspension” phase the last ten years. 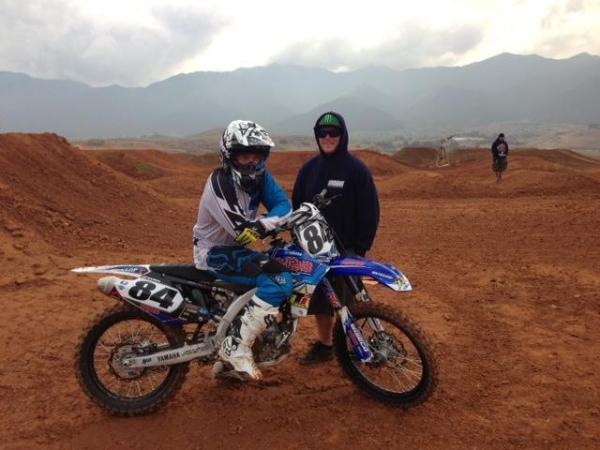 The very first thing Bones showed me was all the old files he had to pull out of his file cabinet. We’re talking mid-80’s on because it seems a customer dropped off a set of 1989 YZ 250 forks and he was digging through his old settings to hook this customer up. Yes, at Pro Circuit they don’t fool around. Anyways, Bacon had all these settings for all these iconic riders in this little notebook. It was like a massive blast from the past. I looked feverishly for any Ross “Rollerball” Pederson settings but came up empty. I did, however, find the Jo Jo Keller fork specs from 1984.

After that Bones was telling me about the new air forks on the production bikes as well as what his team was going to run in 2013. I got a nice 30-minute education on the pluses and negatives on what they raced with last year, the new production air forks as well as the SFF stuff they’re going to have this year. Look for a more detailed report on all this stuff after I do some more research but suffice to say, Bones is very excited for the improvements on the PC team bikes. As if they needed to get better.

From there, it’s a short walk to the grinding room and there he was—Mitch Payton himself working away on a four-stroke head. I’ve seen Mitch in there more than a few times and it’s always funny to me. This guy that’s ground thousands of cylinders and heads for thousands of riders and created this empire is still, at the root of it all, working away late at night trying to make power. We spoke for a little while before Bones shooed me out of there because someone from Showa was there to show them some confidential stuff. So I was out, but unfortunately for the race mechanics, I went into the race shop to see what was up.

The guys were there working away, I saw a lot of frames on stands with just footpegs and swingarms mounted. I’ve been there and recognized the process of building a brand new race bike. There’s still some time before Anaheim 1, crew was starting the build process so that when the final motor and suspension settings are decided, they can have a rolling chassis ready to go. 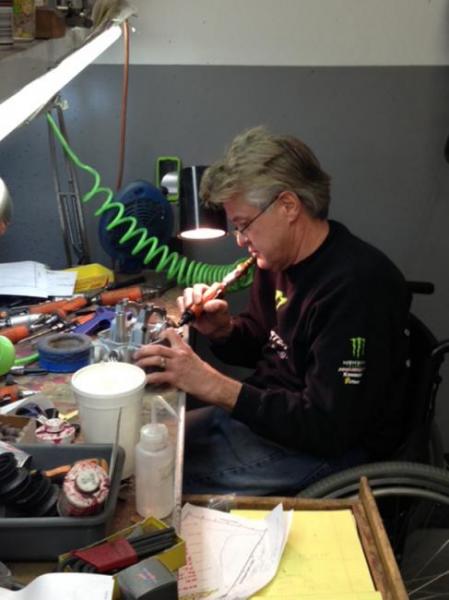 After the top secret stuff was gone, Payton came and let me do a little interview I had asked him for. As usual, we discussed a number of topics and he gave some great answers. Mitch has been around the sport a long time both as a fan, an owner and now, a power broker of the sport. After I hit stop, we spoke about the smaller teams in the sport and how they need to be rewarded for participating in the sport or we’ll be in danger of losing them.

From there, Blose’s mechanic (and fellow Canadian) Donk met me at PC and it was off to the Tragically Hip concert in Hollywood. The Hip is a favorite band of mine and up in my motherland, they sell out 15,000 seat arenas. Down in Southern California? Not so much so it was an intimate show in front of 300 people or so and it pretty much ruled.

It was a perfect ending to a great day of watching some of this sports best do their thing. Either on or off the bike.

I can’t wait until Anaheim.