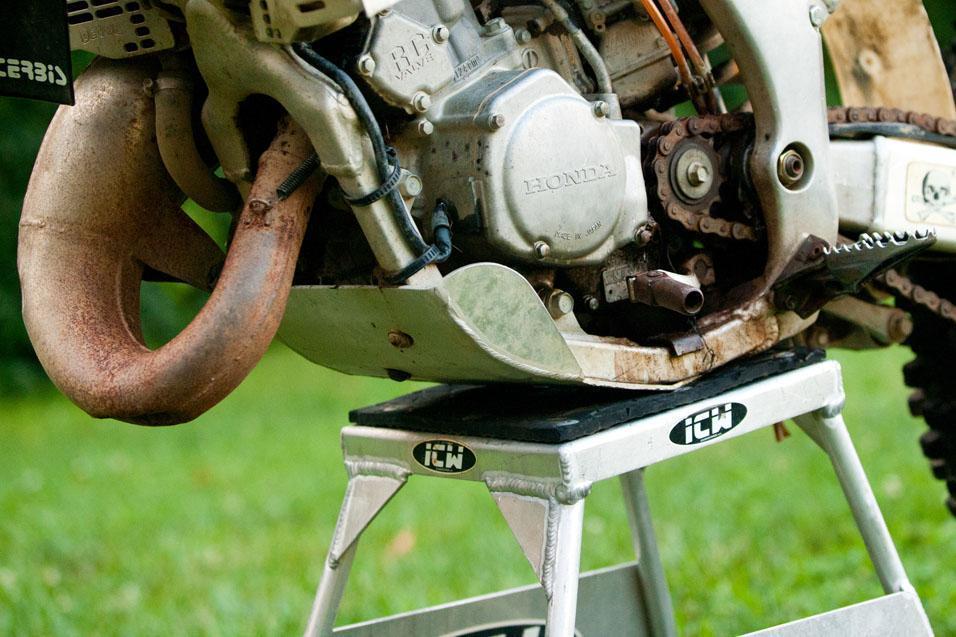 If you’ve ever searched for a used bike, you’re well aware of the rat piles and hammered heaps on Craigslist. These machines range from spray painted beauties to motorcycles that no longer run and are missing half of the bodywork, and are often described as, “very fast” and, “like new.” The one thing that  all these ads seem to have in common, however, is that they are hilarious. So, for your enjoyment, we’ve once again roosted through Craigslist and put together some of the most entertaining ads. Half the fun of this new feature comes from reading the comments section, so be sure to toss in your two cents on which machine is the best, or worst, purchase.

KX 500
Ah, yes, the last of the Mohicans. The KX500 will go down in history as the greatest big bore machine in motocross history. From a trillion Baja 1000 victories to the last 500cc AMA National champion (Mike “The Rock” Larocco), the mighty Kawasaki five-hundy is a nostalgic machine. But, not this one. Not only does this chap claim this wounded soldier has “great tires” he adds that the engine was rebuilt 25 hours ago. Does that mean the owner powered down five Adderall pills throwing in a new piston and rings Saturday morning, or is he implying the “fresh” engine only has a day and an hour on it? The jury is clearly out on that one. The only certainties are that this machine has been crashed. Hard. It was a good call to take pictures with the bars turned because for a brief moment the crookedness of the entire front end is hidden. Finding a rut on this machine would be like playing Operation after a fifth of Jack Daniel’s. The only thing "tight" on this legendary beast is oddly the chain. The prime factor in this item is the owner’s ambition to trade straight up for a quad with 4x4 with a gun rack. Based on that nomenclature, you should carry a can of pepper spray and probably a .22 if you were to check out this pearl in person. 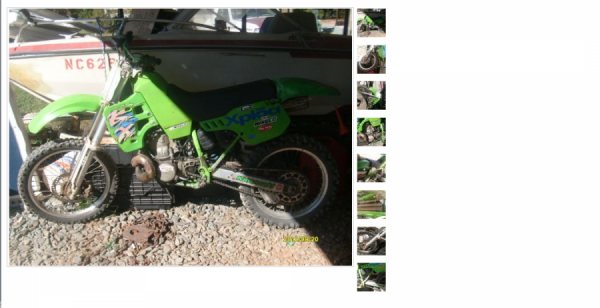 1988 RM125
The real question behind this machine is, “How much Saki did the Suzuki engineer put away when he came up with the idea for a blue engine?” A close second place to this madness arrives the notion of applying Armor All to the blue seat cover. This is the polar opposite to the ribbed and “butt-stop” ridged seats of the factory bikes today. Not that the 20hp this colossus boasts would pull you off, but if you were to accidentally knock her into 1st while holding it wide for the gate drop, you would be toast.

I have to say, all in all, this “Full Floater” adorned time machine looks pretty decent. Keith Turpin or Todd Dehoop may even approve. The only thing I can figure out is that these folks came into some money in 1988. The post states the RM is “owned by a women,” which while sexist as hell, isn’t beyond reason why it looks a pad load better than that woeful 1988 YZ250 in the background.

Other glaring red flags are the 20-year expired green sticker and the one thousand dollar asking price. I mean, I have a 2009 YZ450 that I’d let go for $1500. Beauty is in the eye of the beholder and a vintage pro might be able to turn this lemon into lemonade. Hard to tell how this thing really looks without the five gallons of Armor All though. 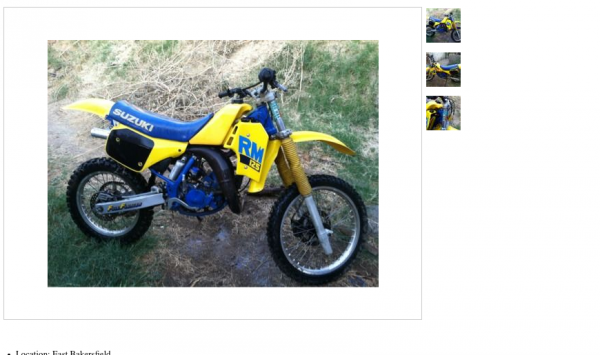 1992 Suzuki 350
Contrary to popular belief, you actually can polish a turd. If fact, no rubbing is necessary at all. Just spray paint that bad boy camouflage and she’ll shine like a diamond in a coal miner’s butt crack. It’s a 50/50 call as to whether or not this is a government-produced bike for the Gulf War Navy Seal team, or a coyote hunter’s dream. Either way, somebody carted huge as evident of the right side of the bars pitching high. Sometimes a big bail will have a man changing his hobby, but the $750 asking price raises an eyebrow. Either this poor bastard’s wife told him he had a week to get rid of it “or else.” Or he is in serious trouble with a loan shark named Nicky.

I’m not so sure about the “new chain and sprocket” either. I can see a lot of grass between the teeth of that new rear sprocket. In my world new means new. It’s a tough call due to all of the camo. I’m not sure about this bike, man. The handlebars are spray-painted camo and they’re smoked. What else is this bike hiding? 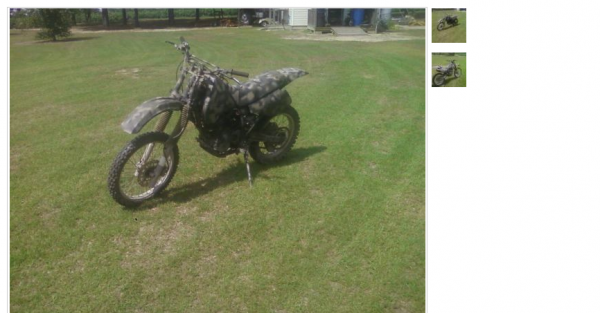