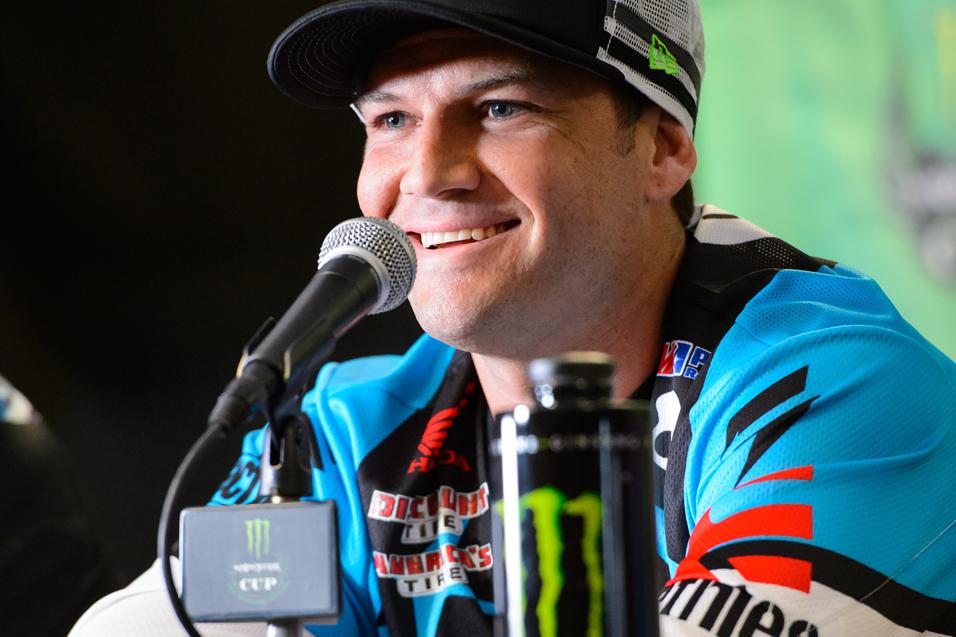 Chad Reed, TwoTwo Motorsports Honda, 5-6-4 for 4th overall
At times I rode well and at times I rode rusty. In the second one it was my best shot at winning, I wasn’t too far back of Justin [Barcia] as he was in a fight with [Mike] Alessi that was slowing him down. I was catching them and had already taken the joker [lane] so I was set there. I was trying to be there for when they took it. I lost the front end and crashed. I could’ve been on the podium.

I’m happy to be honest, I’ve been riding two months and I haven’t ridden that much at that. No excuses and my starts, they just come down to me being rusty. I think that what we accomplished here was fine. We got thirty laps in and some flashes of brilliance and some not-so-flashes of brilliance. But I’ve got three months to work on things and also, we learned some things about the bike tonight. We tried the air-forks out for the first time and the results were encouraging. 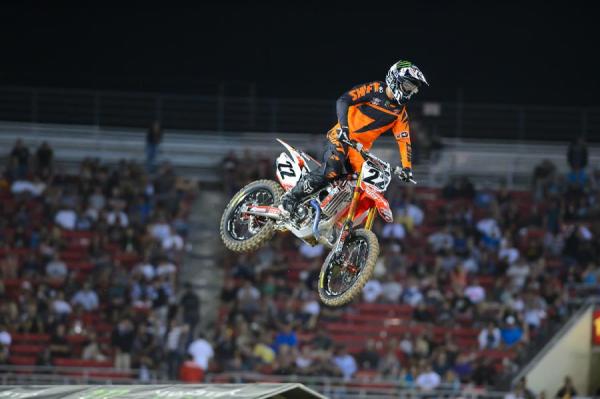 "I’m happy to be honest, I’ve been riding two months and I haven’t ridden that much at that. No excuses and my starts, they just come down to me being rusty." - Chad Reed
Simon Cudby photo

Josh Grant, JGR/Toyota Yamaha, 6-5-5 for 5th overall
It's been awhile since I've had a holeshot! Got me excited. We've been doing a lot of starts with some of the stuff we're trying on the bike, and it was good.

Now that you've raced it, does this at all feel like the same bike you raced two years ago?
Honestly it's a blur. The last couple years have been a blur. But I'm really happy with it and satisfied. Tonight definitely fires up everyone on the team, and me too, to go back and work my ass off and come out at Anaheim swinging.

What did you think of joker lane and split start?
Overall I thought the track was awesome. I thought it was more of a race track in some ways than a lot of the regular supercross tracks—a lot of times they seem to jam stuff in, and it makes it kind of tight and hard to pass. This was good. I didn't like the joker lane. It is what it is. The split start was cool; you didn't see any big pileups like you see at a regular supercross. I think the left side gave an advantage due to the race line sweeping in. But it was good.

Kyle Chisholm, JWR Kawasaki, 11-9-8 for 8th overall
It was okay, we made a little change with the suspension and with only a few days on that stuff, we did okay. I was top ten so that was fine. The track was fast and slippery and I got “Friese’ed” the last moto on the second lap but I did have one coming because I got him in the first moto so I guess I have to expect that. I felt like I could’ve gotten towards the top five without the incident. The event itself was a little bit better than last year, I feel like they learned some things but for me, the outdoor section and the longer lap times from last year suit me better. The track was better for racing this year.

The gate not dropping was funny. I saw flames out there and knew the guys were already out into the stadium so I pulled up when the gate didn’t drop. My clutch was a little fried though. We were all just sitting there, but thankfully they got it figured out. 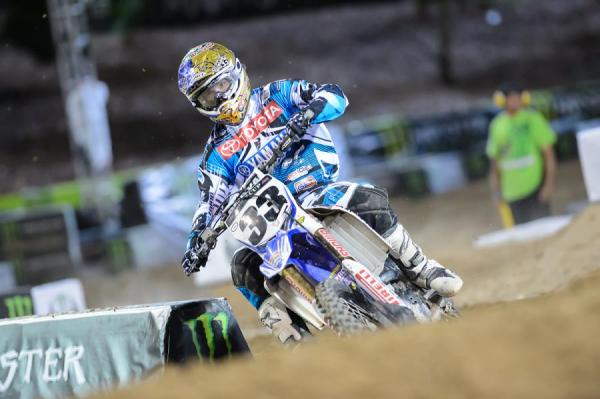 "Tonight definitely fires up everyone on the team, and me too, to go back and work my ass off and come out at Anaheim swinging." - Josh Grant
Simon Cudby photo

Mike Alessi, MotoConcepts, 7-3-19 for 9th overall
I thought overall, 12 months ago compared to this year, there was a big change for me. My persona, physical and mental, and mechanically my machine were significantly better. I'm walking away taking a good positive, knowing I'm ready for supercross next year, and the translation from motocross to supercross is going good. The night didn't end the way I wanted it to, I was leading that last race and I washed out and threw away that lead, unfortunately. Just a stupid mistake. But you know that's how it goes. I'm not going to get down on it. I know my speed was right there tonight and I was racing those guys hard, and clean, but fair.

You led a lot of laps, and when guys would get you, you would get them back. We've seen you holeshot and lead before, but do you feel like this race is one of your best runs in supercross ever?
For sure. I didn't get great starts. The last one I got a good start but [Ryan] Dungey left the door open where everyone came together, and I ducked inside of him and took the lead. I was making passes, I passed Barcia back in moto two, and I passed Dungey off the start there in moto three. Like I said, it was a solid night. I look at it like this; the guys who were up front where guys who were predominately up front in motocross. Dungey. Tomac and Barcia. They were ready for the intensity tonight.

Split start? Joker lane? What did you think?
I thought it was amazing. It was exciting. At any moment, anyone can take the lead, especially with that joker lane; you don't know when someone is going to hit it. It's an interesting concept.

What happened when you fell?
When I went to go three into the turn, it just threw my body forward, I washed it and that's all she wrote.

This track didn't have whoops, and once that's back in the track, will you have them handled?
I believe so. We have Ohlins on board, and I think tonight my bike was working exceptionally well. Only doing testing for three weeks, it's come a long way in a short amount of time, and we still have two and a half months to make the bike even better. 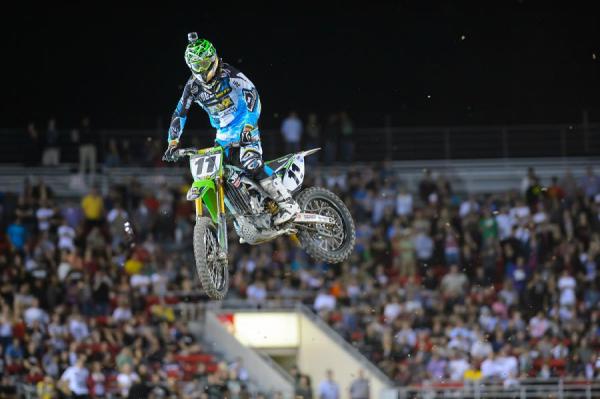 "The gate not dropping was funny. I saw flames out there and knew the guys were already out into the stadium so I pulled up when the gate didn’t drop." - Kyle Chisholm
Simon Cudby photo

Justin Brayton, JGR/Toyota Yamaha, 10-8-20, for 11th overall
Didn’t go the way I wanted it to tonight and that’s two for two with me not having this race go for me. I don’t have an answer as to why it doesn’t go my way. In the last one [main event], Mike Alessi was the problem where he went off the track and decided that he didn’t care about trying to stay on the track and I did. But the tuff blocks were everywhere and I went down which screwed up my controls. In the other two races, bad starts and some crashes happened. It’s hard to go through the pack out here. I thought the event was good, the fans loved it and that’s all anyone cares about. Feld puts on an awesome event and I liked it even though I didn’t do well.

Jake Weimer, Monster Energy Kawasaki, 12-18-10 for 13th overall
It wasn’t good for me. In the very first one I got a decent start and Dungey clipped a tuff block and put me down. In the second one I had a strong ride going and felt awesome but I crashed. In the third one I got a terrible gate pick and I was so far back that I felt like I should hit the joker lane right away. So when I hit it, I started sliding and then stalled it. So the joke was on me.

I was stoked with how comfortable I felt and the bike was good. I would’ve obviously liked to have done better but whatever, I’m looking forward to Bercy. I thought the track was fine but the start was a little dangerous but it all worked out fine. The start did sketch me out a little bit. Two years in a row now, not sure why, they don’t touch the starting gates and they were a mess with ruts.