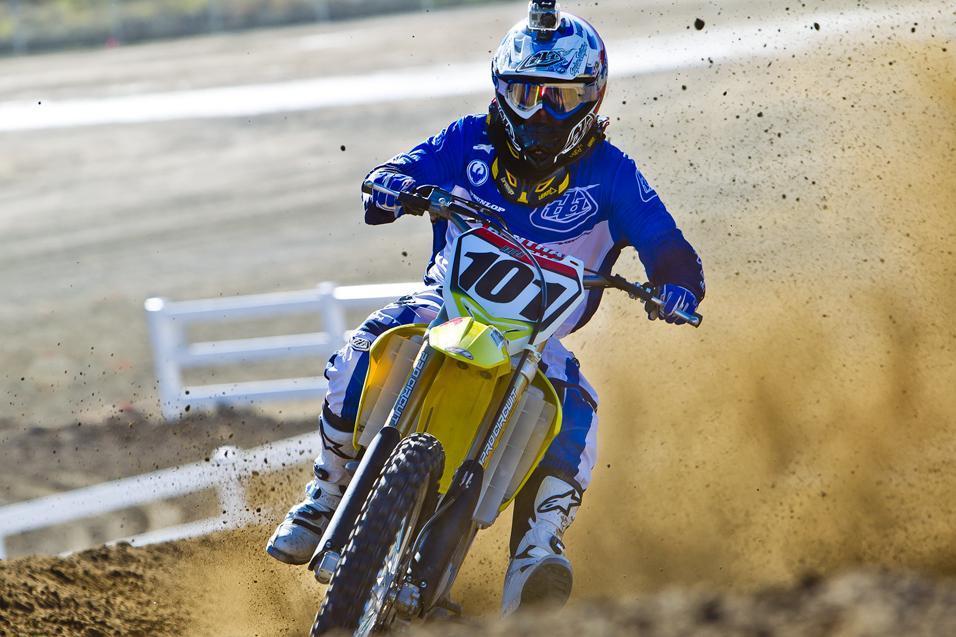 I enjoy your column and your insight on motocross from a rider’s perspective and as an “insider.” I also enjoy your political views. Here is my question. Are the motocross tracks in the USA prepared too similarly? (heavily disked and Loamy) With the recent loss in the Trophy des Nations in the deep sand, and finding we have no similar tracks besides Southwick where a lot of riders commented it had a hard packed base and was nowhere near the deep sand as Lommel. Are we making our tracks too cookie-cutter? We used to have hard packed tracks that developed blue grooves and tracks with naturally based soil conditions with fresh grass before practice. I still believe our riders are the best in the world but not on every type of track with extreme conditions such as hard pack or deep sand.

What are your thoughts?

I don’t think the fact that the USA didn’t win this year correlates at all to the type of tracks we have here in the States. Washougal still gets hard and slick. Southwick is still pretty deep sand. And from Millville to Unadilla to High Point to Hangtown you hit just about everything in between and all sort of conditions. Yes, we used to have hard-pack blue-groove tracks like Carlsbad and worn out rock gardens like Binghamton but we also had dust and poor race conditions that were bad for the riders and for spectating. The truth is that unless we set up a track right at the water’s edge of one of our beaches [that will never happen] we aren’t going to find sand like they had in Lommel. We just don’t have it. It was a very unique race condition and it favored riders and teams who had a good setup for it and had some experience in it. That isn’t an excuse that I’m throwing out because I’m 100 percent American and proud of it [Yeah, suck it, world!]. It is simply the facts. Our tracks are good here. There is always the question of how much we should prep them and I’m sure an issue that the MX Sports crew deals with on a weekly basis. Some people want it groomed more and others want it left alone all day. Look, the MXoN is held in a different venue each year and America has been successful an overwhelming number of times. So much so that MOTO magazine’s cover this month reads “The Yanks Get Spanked.” The Germans won and the U.S. still steals the headline! Let’s not get all worked up over one third place finish. Remember, Stewart and Villopoto weren’t there with Dungey so we didn’t even have our “A” team. If our guys can’t reclaim the trophy next year we can all start a riot and assume the loss is a sign of the apocalypse. Sound good?

I’ve been watching the Racer X Tested bike shootouts that have been posting over the last week or so. The video format is great and it’s cool that you guys post these right here on the sight free of charge. I have a couple questions for you: You use a lot of fast, pro riders and I wonder if their opinions would differ from mine (a very average novice rider)? Also, do you think you are getting a good feel for the bikes in just one day of testing? Some of the other publications ride the bikes for months before they post their results.

Thanks in advance for the reply.

Thanks for watching and I’m glad you like the video format. I’ve been a big proponent of current and former professional test riders since I began our Racer X Tested department years ago. The simple reason is that pro riders who have done real life testing for race teams can feel what a bike is doing, good and bad, in a few short laps. I could use all sorts of analogies here: Would DeMarini hire a little league player to test new bats or would they use a seasoned player who can give them more feedback on the feel and performance of the bat? Does Porsche hire a professional driver to help with car testing or do they employ some random guy whose resume includes a 35-minute daily commute on a winding road to his former job? Do you think Boeing hires professional pilots to test their new aircraft or they seek out a young farmer from Indian who flies a crop duster over his bean fields? I think you get the point.

And that segues nicely into why we can get excellent feedback from our test riders in a short amount of time. I can understand that it may take months to get a feel for all the machines if you are a sixty-something novice who only rides one track every weekend. And while there may be some great information after an extensive period of time on the bikes the majority of buyers have already made their purchases at that point. We try to get a good amount of feedback to those who are looking to buy new bikes and give you an idea of what multiple riders thought of each machine. And I get a lot of people who ask the same thing you did: I’m slow and Greg Albertyn is a former champion. How does his opinion relate to what I would like? A good bike is a good bike. While it’s true that each rider’s opinions are going to differ slightly you can start to pick up patterns in what each rider is saying. And if a bike turns well it is going to turn well for a beginner or an expert. That is simply a characteristic of that bike. If you had a professional chef tell you that a Ginsu knife was better than a dulled razor knife he pulled out of his toolbox would you believe him or say, “Well, I’m not a professional chef so how does he know the Ginsu is better for me than the box cutter?” You take the chef’s word for it. Unless you are a total douchbag, in which case, good luck cutting tomatoes with that razor knife.

Working at a corporate warehouse, it isn't unheard of to be working with every high school jock wash-up that believes they should be playing in the NFL. Growing up racing motocross and having a passion for it, I find myself in a daily argument with multiple meatheads, who say motocross is easy and as boring as NASCAR. By any means, I shouldn't be lining up for A1, but I definitely don't belong in the nervous novice class. I raced motocross all my life and also WORCS the past couple years. Being a motocross enthusiast, I don't and won't back down from this argument. I remember you writing an article in a Racer X magazine explaining what it takes to be a motocross racer. I know I have it and have wanted to find it to shut these jocks up, but I can't find it to save my life. I feel the argument between a motocross racer and a football player will be a never-ending battle, but I'm asking you to give me some ammo to throw at these ogres to shut them up. Their argument is how strong, big and fast football players are. They believe that motocross racers sit on a dirt bike and ride around. I know the dedicated riders and racers in this sport don't do that but I can't get that point across. Please help me out so I'm not attacked by these overgrown muscle hamsters who can't realize they just weren't made up for the NFL. I'd highly appreciate it!

We could build a formidable case for our sport by pointing out facts and using logic. But, sadly, at the end of the day OJ is still going to walk. These brainless morons don’t have a clue and nothing you can say is going to change that. So, unless you want to invite them out to ride your bike and show you just how easy it is, you are going to have to ignore them. If you can get them to a track you can win this. They said that all you have to do is sit down and ride around, right? Ask them to meet you at a local track and show you how it’s done. It will cost you some bars, levers and possibly a sub-frame and graphics but I’ve got to believe it would be worth it. Short of watching them crumple themselves up into a bloody ball off the first jump they hit I don’t see any way you can win the argument. Leave it alone or invite them out to hurt themselves. Oh, and send me pics of the aftermath if they actually show up. And maybe draw up a liability waiver. And if this goes to court I never told you to do any of this.