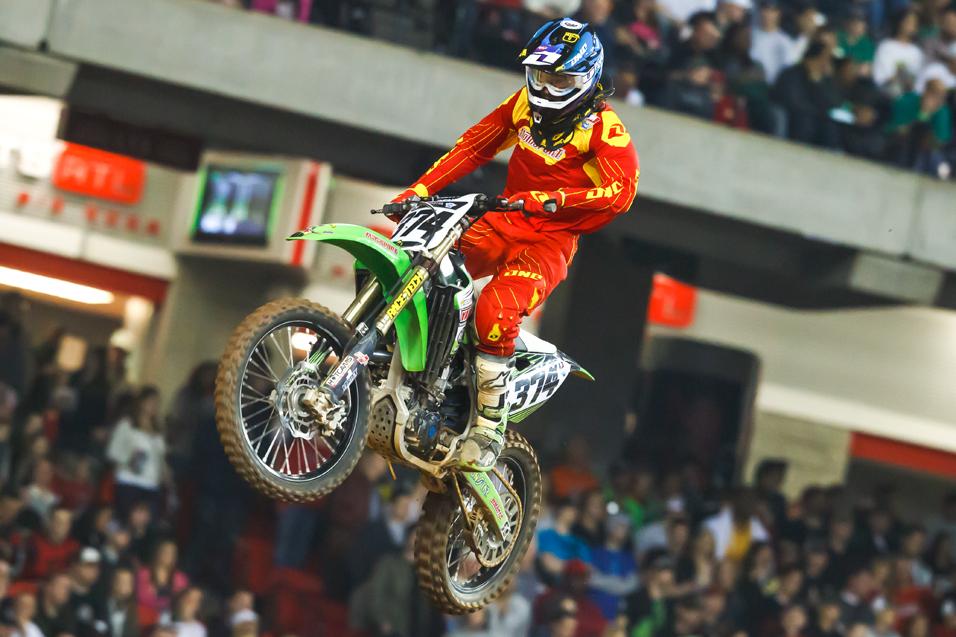 Moving up from the 250s in 2012, Cody Gilmore made his first mark on the 450 Class at the end of the supercross season, when he qualified for the main in New Orleans. Though it was late in the season, he accomplished his goal of making the main. This year, though, Gilmore hopes to spend more time in the night show. He’s been preparing and training by riding at supercross tracks built around Nebraska and Iowa. He also raced around the Midwest, training himself the best he could for what 2013 will bring. This weekend, Gilmore swept the Open A and Lites A classes at US Track and Trail’s first annual Best of the Midwest Championships in Lincoln, Neb. We caught up with him to see how his first year of supercross on the 450 went for him, what he’s been doing all summer and what we can expect for 2013.

Racer X: Have you been racing in the Iowa and Nebraska area all summer, or was this weekend just a one-time thing?
Cody Gilmore: Yeah, I’ve been doing that all summer. I’ve just been doing as many local money races as I can all summer, kind of around the South Dakota, Nebraska, Iowa, Missouri area, all in there. So, pretty much, wherever the money was this summer is where I went.

You did pretty good this last supercross season. You made your first main on the 450, which was a good step for you and it was your first year up with the big guys in the 450 class. How’d that go?
It went good. Making the main was good. I made that in New Orleans, so it was a long time leading up to that, though. That was pretty late in the season. I definitely would have liked to make a main sooner than that. A couple things went on and I just wasn’t getting the best of starts all year, so that held me back.

Does that affect your goals for the 2013 supercross season?
Yeah, my goals are definitely to make more mains than one. I need to get way better starts this year, focus on them a lot. From there, I need to work on getting comfortable with the bike and making my bike better to fit me more.

Are you going to go to all the supercross rounds if you can?
Yeah, I’m planning on doing all the west rounds for sure and then all the close east ones, we’ll kind of just see how the season goes. But I’m definitely going to start out by going out west and doing the west coast rounds on a 450 and then kind of see what happens after that. I plan on doing them all. 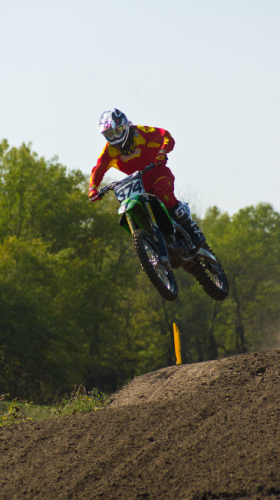 You haven’t really done any outdoor pro racing since you were on the 250s in 2010. Do you think that you’re going to come back in 2013 if you can and race some of those outdoor rounds?
It’s really tough to make it to them with limited funding. You have to have good funding and good bikes to race them. This year, I kind of had a few things go on to where I wasn’t able to make Millville. And if I couldn’t make Millville, the closest round, there was really no point in the rest of them because they’re quite a ways away after that. So for the summer, I kind of just stayed down here and tried working on some things that I was struggling with a lot during the winter and raced a bunch of local races during the summer and just took some time off. Last year (2011), the reason I didn’t race any outdoors was I tore my labrum at the Seattle Supercross toward the end of the year, so I had to have that worked on. That took up most of my summer, waiting for that to heal up. But I would definitely like to do a few outdoors this coming year.

In 2011, the big story about you was you coming back from your treatment [for cancer]. How is that going? Still cancer free and going strong?
Yep, still cancer free. I had my last checkup this summer. That was my five year mark. So my appointments went from checkups every three months to checkups once a year now. It’s all good. I’m five years out right now and all healthy.

That’s awesome. Another thing for you was that there aren’t a lot of guys that come out of Iowa. You, Gavin Faith and Justin Brayton are about it. What are the challenges or difficulties being in the Midwest, where motocross isn’t quite as popular?
The main challenge is having good tracks to ride. You go anywhere else and the tracks are way different. They’re usually way rougher and there’s way more competition and way more people that show up. The other main thing is we only have half a year to ride up here, so after that, during that winter time, that’s kind of what holds you back when you’re a kid in school. You can’t really ride all winter, so you have to go down south or go out west to stay on the bike. That’s a major issue. If you can get out to California or Texas, you can make it work, but then it’s kind of tough because you don’t have everything in your backyard, you know? You’re going away from home. So that’s the main thing is not getting to ride all year.

Do you have anything lined up yet as far as sponsors for next year?
Right now, I’m still working on a bunch of stuff. It looks like I’ll be taking our fun mover, semi type deal to all the rounds out west for sure. I’m going to stay in that while I’m in California. I’m still working on all my sponsors right now. It looks like I’ll be back on Kawasakis with Yankton Motorsports again and, from there, I’m still pretty much working on everything. I’ve kind of been waiting it out, trying to figure out a few different things and nothing’s come my way. It’s going to be better to do my own deal. It should work out really good to do this. The motorhome I’ll be pitting out of is huge. It’s got a lot of space for sponsors on there and stuff. I’m actually working on trying to get maybe even a little team together. I wouldn’t mind getting one more rider out with me. I’m trying to work with that. If all the funding comes together, hopefully it’ll be me and one other guy out of my motorhome. That’s what I’ve been working on. Oh, and I’ll be working with Race Tech Suspension, too. 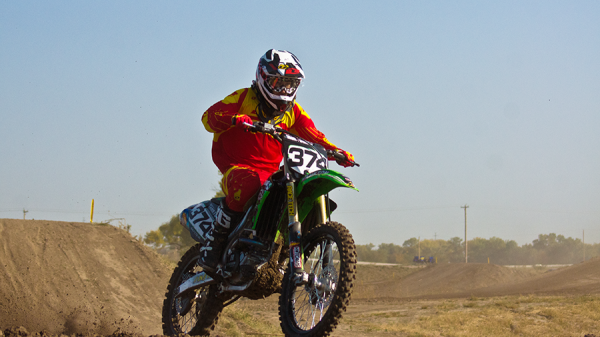 Gilmore will be racing a 450 in SX next year.
Haley Whisennand photo

So if you did get to pick another rider to be on this team with you, who would be your ideal pick?
Definitely someone I’ve been friends with in the past and that needs help and that can do good that doesn’t have help right now. There are definitely a few guys that I have in mind and hopefully, I’ll be able to contact them soon when some stuff starts coming together. But if it doesn’t come together, I guess I’ll just be there at the races if they need anything. But, yeah, just a few friends. I don’t know what people have going on right now, so I don’t want to jump forward too far head first and not be able to do anything and give them false hope and stuff. I have to make sure that I can get everything worked out for myself first then stuff will come together. I’d like helping someone get to the races, even if we couldn’t share all the same sponsors and stuff like that.

The Midwest doesn’t have optimal winter outdoor training weather, so what are you going to be doing then to prepare for supercross?
I’ll be staying here in Nebraska until it gets too cold to ride. There are a couple supercross tracks that I have pretty close to home, so that works out really well.  I can stay on them and stay on the bike until it gets too cold. I plan on sometime maybe late November I’ll be heading down to Texas or maybe out to California. I’ll definitely be heading out from here not too long, actually.