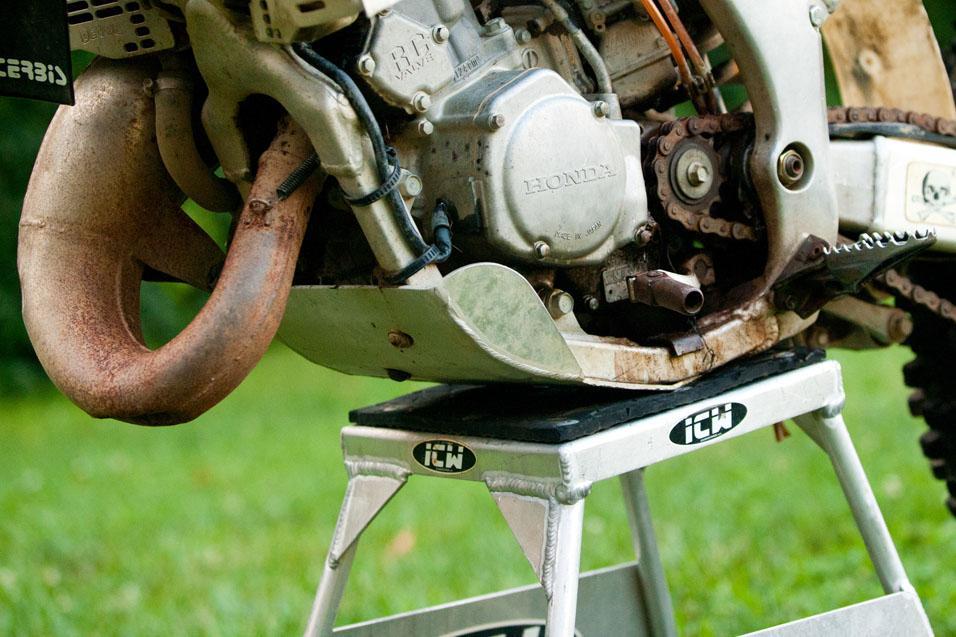 September 27, 2012 12:30pm
by: Aaron Hansel
If you’ve ever found yourself hunting for a used dirt bike, you’ve no doubt come across the many junkers from hell that are available for purchase in the classifieds or on eBay or Craigslist. Whether it’s due to obvious lies or outlandish tales from the seller, or the dilapidated condition of the machine itself, these ads are often hilarious. So, for our readers’ enjoyment, we’ve painstakingly clicked through several Craigslist listings and picked a few lucky winners to mock feature. Read our evaluations and use the comments section below to tell us which ad has the best or worst purchase.

This first one isn’t a motorcycle, the words in the ad are unremarkable and the machine itself appears to be in clean condition. You’re probably asking yourself why we’re looking at it. Well, aside from the fact that this seller is trying to get $3500 for a vehicle that was banned by the U.S. Government in the late 80s, there’s several interesting items in the picture. If you look closely you can pick out what appears to be a blanket, snowboard bindings, a model fire truck, hubcap and some sort of stoplight that looks like it was stolen from the local go kart track. Are these items included in the sale? If not, why are they in the picture? If so, what in the world would you need them for? Our best guess is that it’s some sort of weird three-wheeler operator’s survival kit. The blanket makes sense; you’ll need something to huddle under as you wait for help after maiming yourself in the middle of nowhere. The stoplight is for signaling the first traveler that happens to be passing by, and the nice shiny hubcap is used as payment for a ride back to town. Or maybe you can use it to reflect the sun and attract attention? As for the model fire truck and snowboard bindings, well, we have no idea. If the ATC catches on fire, you'll need a real fire engine, not a model. But perhaps you could take off those back fenders, strap the snowboard bindings to it, and shred your way back to civilization? Perhaps those aren't number plates on the fenders--maybe that's grip tape, or a marker for those bindings? We’re hoping our readers can shed some insight on that in the comments section.

After checking this beauty out the only thing that surprises us is that it doesn’t come with a gun rack. We don’t know what brand it is, and given that the seller simply refers to it as an “off-brand,” we’re guessing he doesn’t know either. Among the "modifications" we see are a rear fender made out of diamond plate, an enormous muffler that looks like it came off of a V-twin street bike and a snazzy black rattle can paint job covering the blue plastics and seat. Obviously, some serious time and effort went into this project, and we’re guessing this bike is the coolest thing to hit the weekly gravel-pit beer blast parties since the seller’s neighbor finally finished ramming that big V8 into his Ford Pinto. Rick Melon, you got nothing on this!

As tempting as it might be to drop $500 on an off-brand dirt bike that almost certainly has fewer papers than a back-alley mutt, we’ve got to recommend that you stay away from this deal for safety reasons. Although the seller seems to have a handle on fitting all sorts of parts from other bikes on this machine, the rear brakes aren’t something he feels are very important, as evidenced by his statement, “…it has no rear brake cause guy before me cut it off…” A sentence later, the seller brags about a claimed top speed of 70 mph. No problem, what could possibly go wrong at 70 mph on a pieced together dirt bike with no rear brakes? (Hey, at least if you loop it out, that fender ain't goin' nowhere).

Again, this isn’t a motorcycle, but it is a type of motorcycle accessory, which makes it fair game to be ridiculed discussed in this article. The seller obviously has a sense of humor by describing this sidecar as being in nice condition and attempting to off it for $1000. That’s got to be a joke, right? If you’re going to try to get a grand for this hoopty, at least put some air in the tires and take the junk pile out of it so it doesn’t look as though it’s been serving as living quarters for three unshowered bums and a shaggy dog for the last several years. Oh wait, yeah, vagrants would never enter this device, for fear of Yosemite Sam. He told you to back off!

Speaking of dogs, that’s about all this sidecar is good for. Just chop the top, throw some bomber goggles and a long, flowing white scarf on your four-legged friend and hit the open road. Actually that doesn’t sound too bad. Anyone know if this thing can be adapted to fit my RM-Z450?