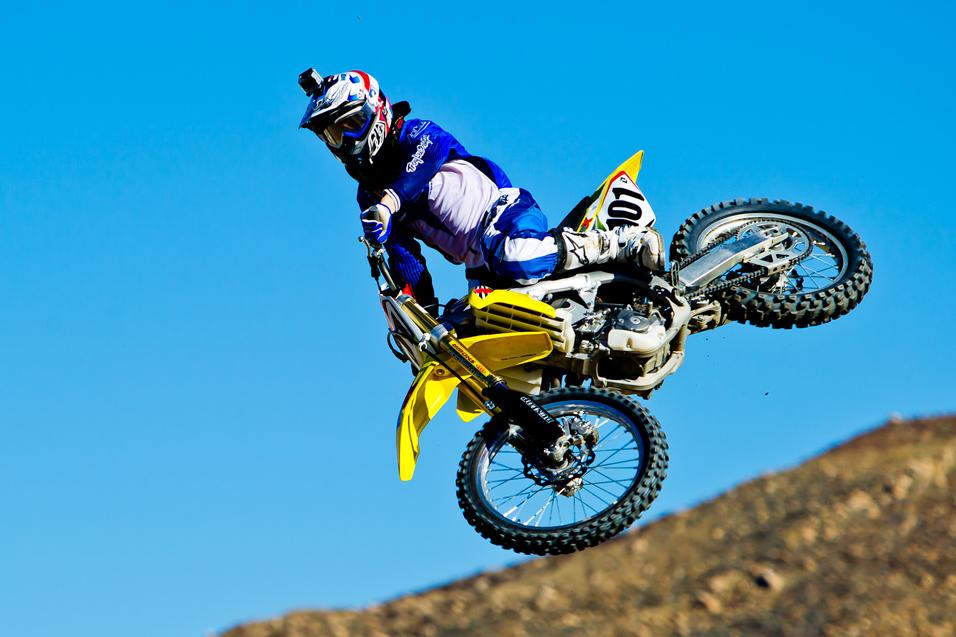 I went to this new track on Saturday and saw the craziest thing. I'm from California and I have seen some strange things but nothing like this. Now that I'm living in the south I guess they do things a little different. The first practice on the track was A/B with about 30 riders. They got about one lap in when 7 horses started running through the middle of the track, turned around and ran back through the middle again with riders on the track the whole time!! I didn't know if I was in Tennessee or Kentucky. Luckily no crashes but it made me wonder what’s the craziest thing you have seen at the track? And a photographer in Colorado doesn't count.

I’ve seen some pretty ridiculous things over the years. Shane Trittler landing on the back of Damon Huffman’s bike in Vegas, motocross weddings, Zwarte Cross and about ten different stories that have to do with James Stewart crashing or nearly crashing. But one event eclipses it. There was a dashingly handsome racer who was coming off a win at Anaheim and looking to make it two in a row in Phoenix. He was leading his heat race when, on the last lap, he inexplicably cased the triple in an endo and smashed into the ground, face first. The bike was snapped in two and somehow this Herculean dirt biker defied the laws of physics and walked away only slightly dazed. Something like that will probably never happen in again in that fashion. Whoever that rider was deserves a medal of honor or probably even better would be a check so he could pay off some bills and stuff. You can make it out to cash and just send it to my attention. I’ll get it to him.

I look forward to your weekly doses of politically incorrect sarcasm. I also have a simple question... I have been surfing the web trying to find the MXoN TV schedule and all I have found is a pay-per-view online stream. Given that I would have to be up at 4am on a Sunday just to watch the thing live, can't the Euro-pee-ons find it in their socialist hearts to let us watch it for free or do they suffer from the 7 "Ps"? I'm thinkin' "Piss Poor Product Placement Predicates Pay-per-view Programming" ...or was that 8? Just curious.

I’m outraged! The rich continue to get richer over there while the common folks are forced to pay for things like food, water and entertainment in the form of motor racing! When will the “sheeple” wake up and realize we need a revolution, man? We need to be taken care of! We are entitled to free healthcare, education, food, financial assistance, transportation, legal council, music and art lessons, yoga classes, henna tattoos, dirt bikes and televised entertainment of our favorite sports! This is a travesty! I don’t know about you but I’m going to grow a beard, move out of my mom’s basement and start living outside Youthstream’s offices in Europe protesting and demonstrating until they change their self-serving ways. Who’s coming with me!

First let me start off by saying I'm sorry for any grammar errors. I enjoy reading your weekly articles. I was curious, what happened to the mx breed of yesteryear. This question was spurred after watching numerous modern gopro videos and freeriding of modern riders. Then I stumbled across steel roots starring Jeremy McGrath. What happened to that style of mxers, you know the fearless ones who were just crazy as well as highly talented. Now it seems as though the guys are to worried about getting hurt or looking bad for their sponsors to really be themselves or cut loose on a bike. I was just curious. You don't have to post this on the website, I just wanted to what you thought.

PS: I have much respect for your paramedic career and you choosing to be one.

I think you meant to apologize for any “grammatical” errors. Sorry, I couldn’t help myself. Thanks for writing in and its funny you bring this topic up because Weege and I were just having a conversation about this very thing. America became a global motocross force in the 1980’s by outworking the competition. While the Euros were having a smoke between motos and making plans to hit the discotheque that night, a group of young American riders were doing pushups and making plans to do triathlons in the off-season. Remember when Johnny O’, Wardy, Bailey, Barnett, Johnson, Stanton and the rest of them used to try to out-train one another back then? They were animals!

Then Jeremy McGrath came along and changed the paradigm. He beat everyone on talent and mental strength… and lots of both of those. His main rival, Jeff Emig, ran the same type of program and instead of trying to outdo one another in the gym between races they tied their boats together at Copper Canyon and funneled cold Coors Lights. I mean, when the only guy capable of beating you is matching you beer for beer, why not drink up? It’s hot in the desert and I’m sure they were thirsty. That was the story for much of the 1990’s and videos like Steel Roots and Crusty Demon’s of Dirt were born out of that era.

Then Carmichael came along and switched things up again. He had the talent of McGrath but he paired it with a gritty work ethic and the tutelage of Johnny O’Mara. Carmichael is now considered the greatest rider in our sport. So, will it ever swing back to the way it was in the 1990’s? I say no way. I can’t see a rider coming in and beating the field the way McGrath did on talent alone. The depth of talent in the field is deeper, the monetary reward is greater [which has a funny way of spurring on hard work] and Carmichael’s career has become the model for how to succeed in the sport. So, sadly, you may not see videos like Steel Roots again. It was a unique time in the sport. That also means we won’t see shiny shirts with big collars or baggy riding pants either. More good news is that with social media and website content you can get closer to your favorite riders, see more of them and learn more about who they really are than ever before. That has to count for something, right?