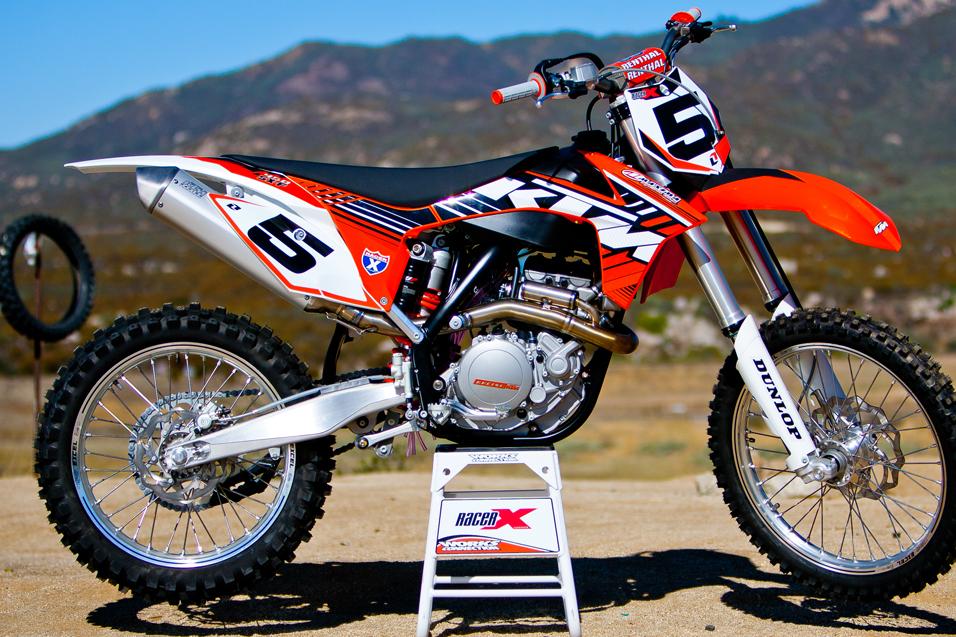 As you probably all well know, we media types are either dumb, lazy or both. That might be annoying at times, but it can be used to your advantage. The off-season is coming up and we will be starved for stories. Besides Motocross of Nations and the Monster Energy Cup, we'll be desperate for content for a three-month span, and this presents the rare opportunity for you to drive this bus. You want us to cover your team? Give your sponsors some exposure? Tee your riders up for money quotes? It's actually quite easy—much easier than finishing on the podium.

Last year, the MotoConcepts team held a media day event on a cold and wet day out at Milestone in California. Right now, MotoConcepts holds some sway because Mike Alessi has rallied to second in the 450 standings in Lucas Oil Pro Motocross, but back in December of 2011, this was just a privateer team without any big stars—Mike Alessi was coming off two down seasons on KTMs, and teammates Jeff Alessi, Vince Friese, Tommy Weeck and little-known Jake Canada weren't garnering big press, either. But during a dead time in the industry, this press event garnered plenty of attention, anyway. I know it did because, as editor of this site, I'm staring at giant holes where content will live during the racing season. Oh, we have photos of the MotoConcepts' launch? Oh, we have an interview with Mike Alessi? Yes! Yes! Yes!

The team even encouraged photos of their new bikes and gear, which was a big coup because it marked the new JT's first big sponsorship of a modern effort. Still, there wasn't anything too ground breaking here, but it was something, and that's all we press lemmings are looking for.

"Team intros are pretty common in road racing and auto racing, but we don't see them much in motocross," says Nick McCabe, a Racer X contributor who covered the MotoConcepts event for us. McCabe once worked for Ducati's road racing effort in the U.S. and was no stranger to such events. "One year when we signed Eric Bostrom to race for Ducati here in the U.S., and we held a big party for the press in New York City. We didn't even have race bikes there, or a track, or a team hauler. It was just a big party, but it got us a lot of press."

We're not even asking for that. I love a free lunch even more than the next guy, but I'll live without fresh food to get fresh content. MotoConcepts held an intro on a rainy day at Milestone, and got plenty of coverage. Due to the rain, the riders couldn't ride, but they did hang out at the MCR hauler, and team owner Mike Genova held a Q and A session with the assembled media. He was able to talk about the uniqueness of his effort and get his message out there. And Alessi still makes a good interview subject—but it would be tough to talk to him at Anaheim when everyone wants to hear from Villopoto, Reed, Dungey, Stewart, etc. 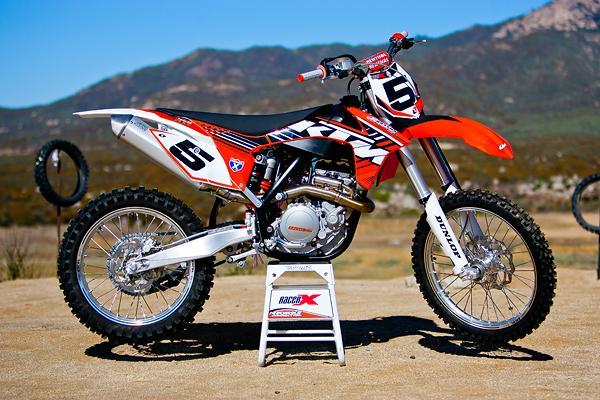 We don't care if all the Anaheim 1 logos are dialed in. We'll talk about your team anyway.
Matty Fran photo

"It was a cool deal to get the message out in a non-pressure filed environment," says McCabe. "At Anaheim everyone is in such a rush to get out for practice and race."

That, and the press is in such a rush to cover all of the stories. Feld Motorsports holds a press day the Thursday before the Anaheim 1 round of Monster Energy Supercross, and it's a mob scene. It's one of the most exciting days of the year, but you're suddenly trying to cover 30 stories at once, and you have to get them finished within 48 hours, because once the gate drops, it all changes.

And that's the hardest part for a team—delivering the results. Once the season begins, the attention will always go to the winners. During that September through December run, though, most any team can warrant some attention.

Last year, KTM took full advantage of the Ryan Dungey signing by holding a press event at its HQ in California. We were all over it. At the time, no one knew for sure if the Dungey-to-KTM move would work on the track. He could have sucked in 2012. The bike could have ruined his career. And if he did, there's no way KTM would have gotten any positive stories out of the deal once the season began. But in October, the world was theirs. The press showed up, and Dungey teed off with positive messages. For three months, it was all awesome in KTM land, and they didn't have to win a single race to get to that point.

Now, this concept is pretty simple and I'm sure most teams and brands would love to do it. But I know why it doesn't happen. Mostly, it's because most teams don't have their programs dialed in yet. Sponsorship deals are always hanging in the balance until late. It's a rush to be ready. Graphics and gear may not be finalized yet. In some cases, brands don't even want the public to see their new look until Anaheim 1.

But you can skip the new look! Surely most of the teams spend the fall testing and practicing. So what if you're testing on a blank bike without the actual graphics package we'll see at the races? We'll still run the photos, and what's more, they'll garner even more attention since the bikes will look so unique.

"I guess it's one of those things where this is the way it has always been done, so no one thinks of doing it any differently," says Grant Langston, the multi-time champ who is now Team Manager for the Langston-Witt Racing KTM team. "We're in a position now where we want to get any attention we can, because it creates a snowball effect. More people talk about you, which is good for your sponsors, and maybe gets other sponsors interested. And with more sponsors you can sign better riders. But, as a rider I've been on the other side, where someone wants to do a photo shoot with you, but you can't because you don't have the finalized graphics on your bike. But, I guess when it comes to press, anything is good."

Other big motorsports have restrictions on testing, which means teams can only test in a few very public sessions on well-known tracks. These test sessions garner tons of media coverage. Rarely do the teams have their full sponsorship package or graphics regalia dialed in for the first test. So they bust out blank cars or blank bikes. They're often all black, which looks cool and stealth. In this sport, you can run a stock-looking blank bike in yellow, red, blue, orange or green. Easy. It seems crazy to not get maximum impact on your investment (running a team, signing riders) because you're not quite sure where your oil sponsors' logo is going to fit on the rear fender at Anaheim. 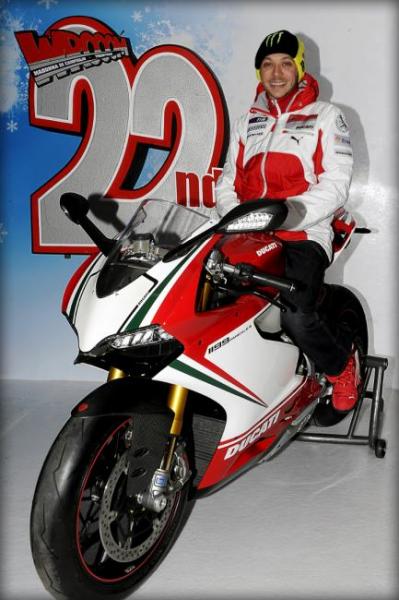 Or you can do even better. Instead of holding a press event, just set up a conference call with the riders. We'll dial a number and ask them questions (remember, we are lazy). The questions might not even be good (remember, we're dumb). But, we'll turn that conference call into a story or interview. And for photos, you can even hire someone to shoot and send the photos to us. Then the photographer can photoshop blur whatever logos you need to hide, or whatever hasn't been approved. We'll still run them, because in the case of the off-season, something is always better than nothing.

In MotoGP, Marlboro is a sponsor of Ducati's effort, and they hold this massive team press event called Wrooom at Madonna di Campiglio in Italy. Everyone went skiing with Nicky Hayden and Valentino Rossi. Now, if you want to pick up the tab and do something cool like that, we would appreciate it, but without Marlboro money it's probably not possible. Or needed. We'd eat up whatever you provide. Check out the photo from the Wrooom event with Valentino Rossi. There is Vale sitting on a stock (no 2012 race graphics!!!!) Ducati, and he's smiling. Yup, all is good in Rossi/Ducati world! Positive, positive, positive.

Then the season begins and the outfit struggles and now Rossi is moving back to Yamaha. Definitely not awesome PR for Ducati today, but once the crucible of racing begins, the results drive the story.

During the off-season, though, it's much, much easier. Just keep that in mind, folks. Oh, and also that we're lazy and stupid.