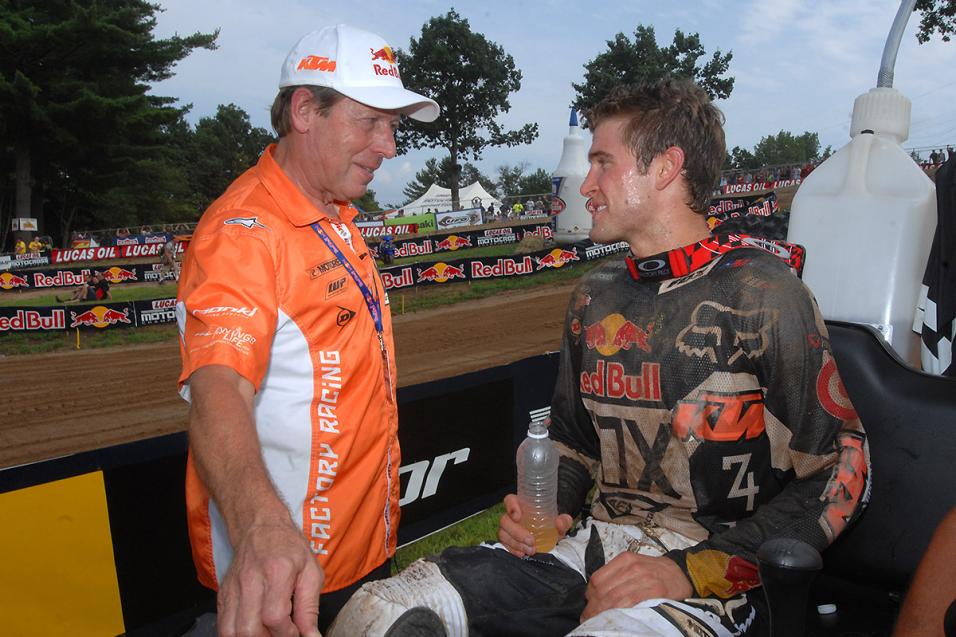 At Southwick, Red Bull KTM's Ryan Dungey won his seventh-straight race in the Lucas Oil Pro Motocross Championship. But it wasn't nearly as simple as it sounds, because he crashed leading moto two, knocked off his gas cap, lost a bunch of fuel, and even had to make a pit stop during the race! He came out of the pits in second place and made a run on moto leader Tyla Rattray, but came up short. His 1-2 scores were plenty enough for the overall win, though. RD5 talked about it in the post-race press conference.

Racer X: What happened with the crash and the gas cap?
Ryan Dungey: Well, second moto we made some bike changes and they made things better. All day, I felt like I was in my groove, but there were some ruts at the bottom of the drop offs, and they were pretty nasty. I came off of the jump, and the rear kind of stepped to the right a little bit, and it hooked the jump sideways a little bit, and that caught it and hooked it back the other way. So I landed pretty cross rutted in the bottom, and that made it even harder. I tried to save it, but it just took me right down. After I fell, I realized I might have kicked the gas cap off. I looked and I saw it pouring out, so I was like 'Man, this is not good.' I got up, regrouped, and I got back into the lead, but all I could think about was if I was going to be able to make it [on gas]. I tried to conserve a little bit, I wasn't riding very hard, trying to save some gas if I could. Thanks to the guys at NBC Sports for getting us the footage so we could see the gas pouring out. We know we lost a lot of gas, and we measured the gas, we would not have made it another lap if we didn't pull in. So credit to the team, we had some of the KTM off-road guys over there helping, like Anthony, he is Kurt Caselli's mechanic, and my mechanic Carlos, they did a great job with the pit stop. It worked out. We didn't win the moto, but we were right there. I'm bummed I made the mistake. 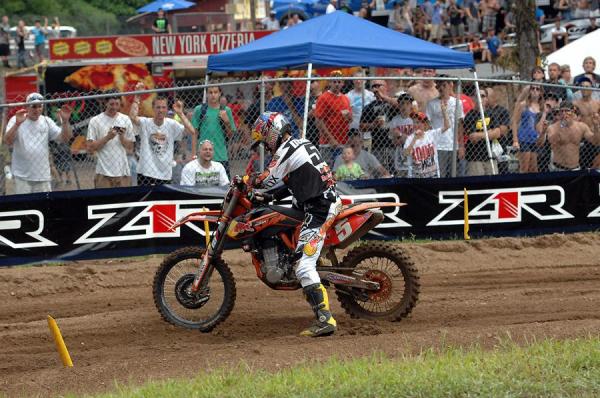 It was another bizaree day at Southwick for Dugey, who had to stop and re-fuel after losing gas in the second moto after an early crash.
Carl Stone photo

Well, you weren't hurt, you still got the overall, and now you'll know if something like this ever happens again, what to do.
Yeah, I didn't know. I didn't know if you could pull in and get fuel or what--I didn't know if that's considered outside assistance or what. It's just a good example of how fast things can happen out there. You've got to stay focused.

Obviously you got refueled, you got back out there. But Tyla Rattray has won here before on 250s, he's a great sand rider. How hard were you going for it to try to catch him?
Oh I was definitely going for it. On that last lap I really pushed it and I got right behind him, and I could tell he really pushed it, too. He's a great sand rider. I think we were both feeling it at the end, but, like I said, for how everything went, to get the overall with a crash and a pit stop, very fortunate.

You have a strange history here now, with what happened last year and this year. Do you think about that?
I don't know, I try to approach every race the same. Last year was last year, and you just try to take those though times and make yourself a better person from it. This year we won the first moto, like we did last year, and the second moto, that was my fault. I crashed on my own and that's what led to the problems.

Since you ended up winning the overall anyway, did you guys almost laugh about having to take a pit stop, and how crazy everything must have been? What was the atmosphere after the race?
I was pretty disappointed that I made that mistake. At the same time I was happy--for the way everything went, it couldn't have gone more perfect. We wouldn't have made it to the end on gas. I knew I had enough gap where I could come out in second or third after pitting. Roger said, "You can't be bummed on that one." And we learned stuff, too, maybe we'll learn a way to make sure that thing doesn't come off again. 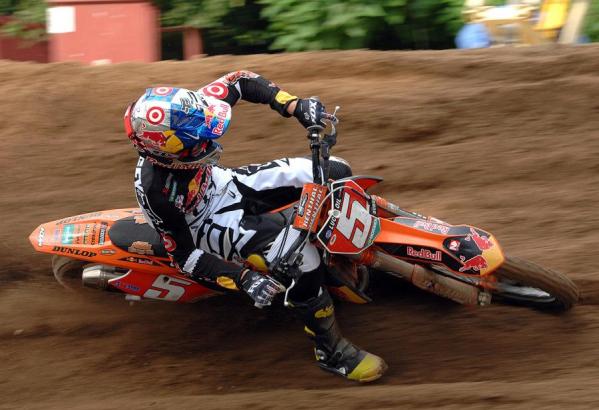 Even with his pit-stop, Dungey was able to secure the overall at Southwick.
Carl Stone photo

You have been selected to to the Motocross of Nations team again. Talk about that.
It's always an honor to be selected. It's going to be tough over there in Belgium, a lot of sand over there, so we're going to go over early and get ready for it. [Justin] Barcia, I saw him ride a 450 last year so I know he's a great 450 rider, and a great sand rider. I have no doubt he'll do a good job, and of course Baggett, who has a lot of speed. It's a great team, we have great people behind us, but it's not going to be easy.

Well, also, that race being so sandy, you'll probably learn a lot about your bike.
Yeah, and today was good. We rode some sand tracks for a few days to test for this one. I had never been in sand on this bike, and today was good, we learned a lot, but it's really going to help getting over there early and work on motor stuff, suspension stuff, whatever it is. It will be good to get over there early. Those guys over there really ride sand well, and they know how to conserve energy.

A lot of riders were saying this was as rough as they have ever seen Southwick. What are your thoughts?
Yeah, I  think it was awesome. Some years before, they have flattened it, and in sand it can become a highway, you'll get little stutter bumps, but nothing crazy. Today, they left it, and they've done it with a lot of the tracks this year. It gets rough, and it really comes down to fitness, bringing out the rider and how much time you put in. Today was Southwick, they did a good job of leaving the rough stuff and fixing the bad stuff. That's the way it should be--I thought it was great,