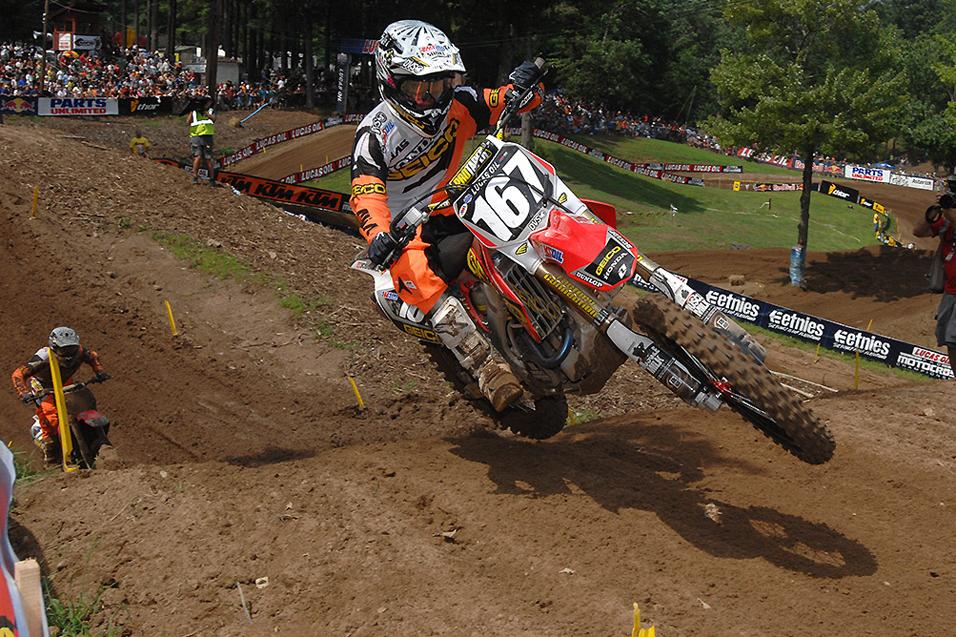 When the starting gate dropped on the first 250 moto at Southwick Moto-X 338, it immediately appeared that we were in for something special. Zach Bell, in his first professional race, grabbed the holeshot and proceeded to lead for five frantic laps. It was an Eli Tomac-like effort circa Hangtown 2010, or Justin Barcia at Glen Helen the year before that. The tiny GEICO Honda rider was setting a blistering pace, leaving the Moto-X 338 faithful scratching their heads trying to figure out who was leading on the #167 bike. But it ended just as quickly, as we’ve seen many times this summer for newcomers running up front. Tomac, the fastest man in the sand in both motos, swept pass Bell and the kid promptly went down and then out.

In the second moto it was a more seasoned newcomer up front, but a new rider to the Southwick fans nevertheless. Red Bull KTM's Ken Roczen, in his own Massachusetts debut, passed Troy Lee Designs Honda rider Jessy Nelson and appeared finally on his way to a long-overdue moto win. Yet once again the superbly talented German was reeled in by series frontrunner Blake Baggett, who in turn was being chased by the poor-starting Tomac. The three of them were within a few bike lengths of one another when Tomac made a pass on Baggett for second, only to get too close to the inside tree of the Buckley Berm and fall off his bike. Blake went right back past him, then really picked up the attack on Roczen. With the overall on the line, the Monster Energy/Pro Circuit Kawasaki-backed Baggett kept right on going, overtaking K-Roc and then, after a spirited response, pulled away with another win. 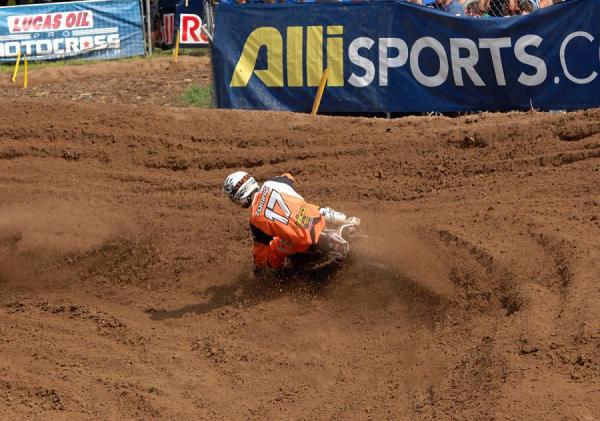 A crash in the second moto keep Eli Tomac from capturing the overall.
Carl Stone photo

What is it that Baggett has that seems to get him to the front when he most needs it? Speed, strength, and confidence, with a little bit of luck—had Tomac not gone down, he almost certainly would have won. Baggett has held the red plate since Day One of this series, and he's now almost a moto ahead with six to go.

What is it that Roczen lacks? Right now it's the ability to close the deal. He's been passed in the late going several times this summer, and his confidence must be waning. But he's still got three races left to show he can beat the trio of Baggett, Tomac, and Justin Barcia—all at the same time.

Here's a closing thought: Imagine how competitive it would be right now if the actual champion, the sidelined Dean Wilson, were out there trying to defend his #1 plate. How would he be doing at this point in this entertaining title bout?