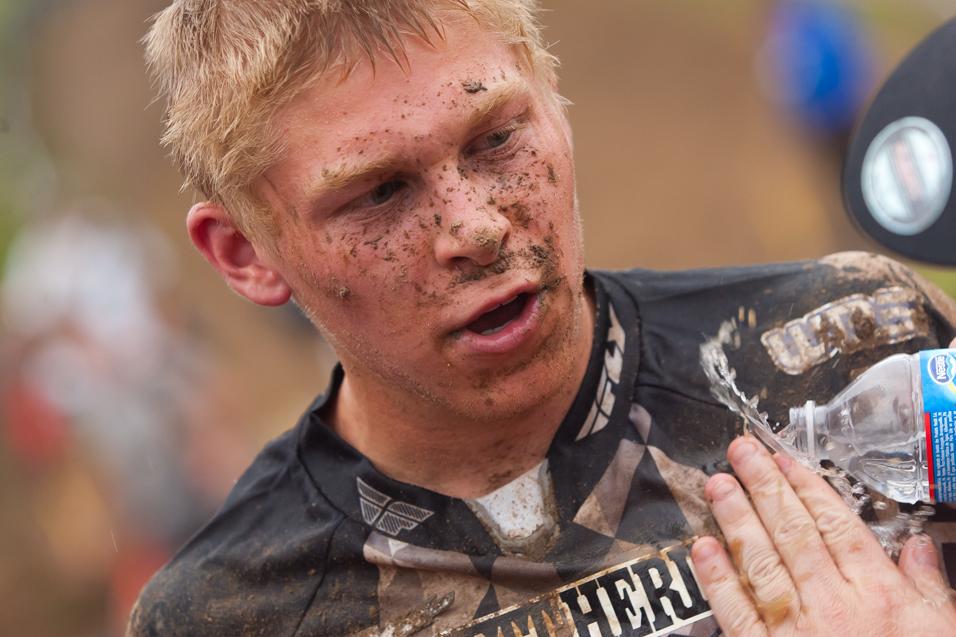 Pivotal Moments
Every National is big, but for the 250 Class this year, Southwick is massive. With eight motos to go, Blake Baggett and Justin Barcia are only separated by eleven points, while Eli Tomac, at thirty-points back, remains in the hunt. If Baggett has another subpar moto like he did at Washougal, it could be the opening Barcia needs to gain control of the series as it enters the homestretch. Barcia has a great record at Southwick, (check out this weeks Going for the W for proof) but he did DNF a moto with bike problems on a 450 last year. So, conversely, if Barcia has a bad moto, Baggett could leave The ‘Wick with a big points lead with only three races to go. And if they both have problems, Tomac could come roaring back into contention! Clearly, this weekend could prove to be a pivotal round in the 2012 Lucas Oil Pro Motocross Championship.

MXoN Matters
Given the closeness to the MXoN, the performances of the top racers are always highly scrutinized this time of year, but with the MXoN being held at a sand track this time around, you can bet that extra attention will be paid to potential members of Team USA at Southwick, the American circuit’s only sand track. Scuttlebutt seems to put a team of Baggett (on a 250) and Ryan Dungey and Barcia (on 450s) as the front running team, but making matters even more interesting is the possible return of Ryan Villopoto, who despite missing the Nationals with a knee injury, could still take a spot on Team USA if he decided he was capable of doing so (but he'd have to get a few Nationals under his belt at the end of the season as proof he's ready to go). Barcia's previous results at Southwick stand as one of the main reasons he's being considered for this year's MXoN in sandy Belgium--so a lot of people will be watching him closely this weekend. 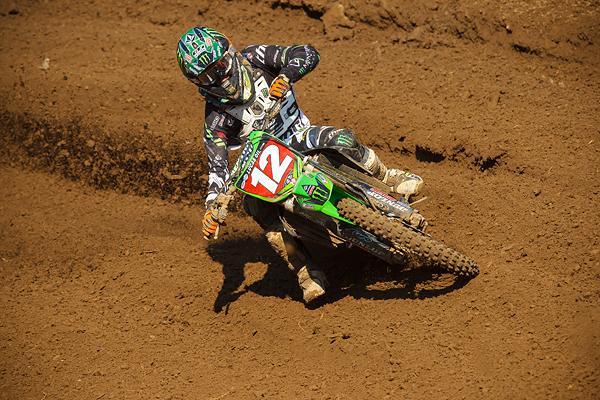 The Local Route
Every venue has a favorite son, and at Southwick, it’s John Dowd. The popular veteran has been racing at the pro level for over two decades and is still capable of pulling down impressive results--especially at Southwick! He was eighth overall last year, and was third overall in 2009, although he came close to winning the whole thing that day! In addition to racing for the hometown crowd, Dowd will also be attempting to earn the fifteen points he needs to retain National number 16 for another year. No matter how he does, you know there will be plenty of fans lining the fences and cheering as Dowd blasts around Southwick for yet another year.

Down to the Wire
As tight as the points are in the 250 Class right now, the situation in the WMX is even tighter. With just four motos remaining, Jessica Patterson leads Tarah Gieger by two points and Ashley Fiolek by eleven. Southwick is Patterson’s favorite track, but she’ll also be racing with a surgically repaired hand that she broke right before RedBud. She’ll also have to deal with Gieger, who his having one of her best years ever, as well as a red-hot Fiolek, who has won the last four motos. Will any of the girls come out of Southwick with a distinct advantage, or will the already tight points battle somehow get even closer?

Debut Redux
Canadian Cole Thompson was set to make his 250 Class debut with the Star-Valli Rockstar Yamaha team at Washougal, but a vicious crash early in the first moto took him out of action before he was able to show what he could do. We know Thompson is fast--he’s had some top-ten finishes in the 450 Class earlier this year--but we’re still waiting to see how he’ll do against the likes of Baggett, Barcia, Tomac, Ken Roczen, Marvin Musquin, Blake Wharton and more in what has to be one of the most intense seasons of 250 racing in years. Jumping up to a new team and class mid-season is a big risk, as these final races will serve as a high-pressure audition on Thompson's potential. How will he do? 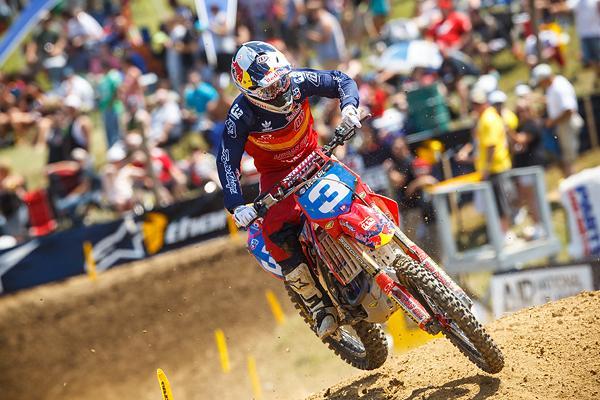 Can Gieger make a push for the WMX points lead at Southwick?
Simon Cudby photo

New England Rippas
You won’t find another track on the circuit that provides the locals an opportunity to shine like Southwick. The NESC (Southwick's local sanctioning group) produces top talent from the Northeast every year, and these boys know how to rip in the sand. Last year’s Cinderella story, Mike Sotille, sent shockwaves through the pits after setting the fastest qualifying time in the 450 Class, and his boys from the Mass (Massachusetts) will be back in full force this year hoping to capture glory once again.

Eleven 10 Shakeup
As the Lucas Oil Pro Motocross Championship returns to the site of Eleven10 Mods’ historic podium appearance in 2011, the team has undergone an overhaul. Phil Nicoletti and the team parted ways during the break—Nicoletti is reportedly riding a privateer 450 at Southwick—and reigning East Region Lites Areancross Champion, Mike McDade, has been signed for the last four Nationals to compete in the 250 Class alongside holdover Alex Martin. Martin led laps and ended up with a top-three finish here last year. Can he do it again?

The Other Points Battle
While headlines at Southwick will surround the 250 and WMX Championship chases, another battle to watch down the stretch is the clash between Lucas Oil/Troy Lee Designs Honda teammates Jessy Nelson and Travis Baker and MotoConcepts’ Jake Canada for top ten in points. Nelson and Baker currently hold the ninth and tenth spots, respectively, with Canada just twelve points back of Nelson and two back of Baker. Can Canada push his way inside the top ten at Southwick or will the TLD duo hold serve? 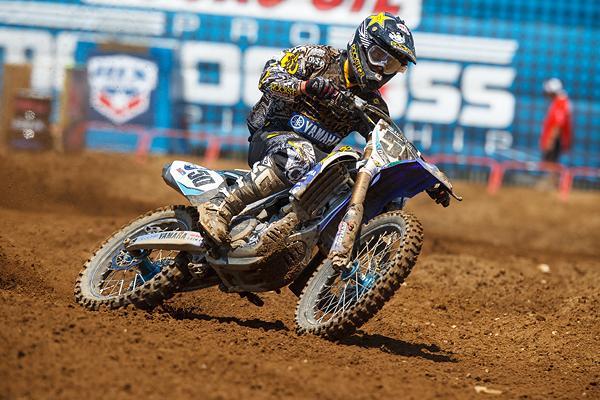 Nico Izzi is back after missing the last two rounds with a back injury.
Simon Cudby photo

Welcome to the Big Leagues
Hot-shot amateur prospect Zach Bell, fresh off his Horizon Award winning performance at Loretta Lynn’s, will make his highly anticipated professional debut this weekend at Southwick. Bell, who grew up riding in the sand, is expected to make noise in the 250 Class on his GEICO Honda (believe it or not, there's a chance you will see FIVE GEICO Honda's at the front of the pack this weekend). Another top prospect ready to hit the pro ranks, also in the 250 Class, is Star-Valli Rockstar Yamaha’s Jeremy Martin. After missing Loretta’s with a shoulder injury, initial reports are that Martin, younger brother of Eleven10 Mods’ Alex Martin, will line up at Southwick. (UPDATED: Jeremy Martin has been ruled OUT for Southwick) Also making his pro debut will be Minnesota’s Jesse Wentland, who won Open Pro Sport title at Loretta’s. Wentland is scheduled to race the 450 Class.

Boys in Blue Back in Action
Kyle Regal's rough season with JGR/Toyota Yamaha is over--he and the team parted ways at Washougal. But we hear he'll be in action on a privateer YZ450F to try to re-prove himself. Meanwhile, Davi Millsaps will be back to carry the blue flag (for Yamaha, not lappers!) this weekend after going MIA with an ankle injury before RedBud. Also, after missing the last two rounds due to a back injury suffered at RedBud, Star-Valli Rockstar Yamaha’s Nico Izzi will return to action at Southwick. Izzi has been a revelation for the injury riddled Star-Valli team and is hoping to pick up the pace he showed early in the season. Ironically, Izzi and Millsaps will be teammates next year--but on the Rockstar Suzuki team. In their waning days on Yamahas, will Izzi and Millsaps find their sparkling early-season form?